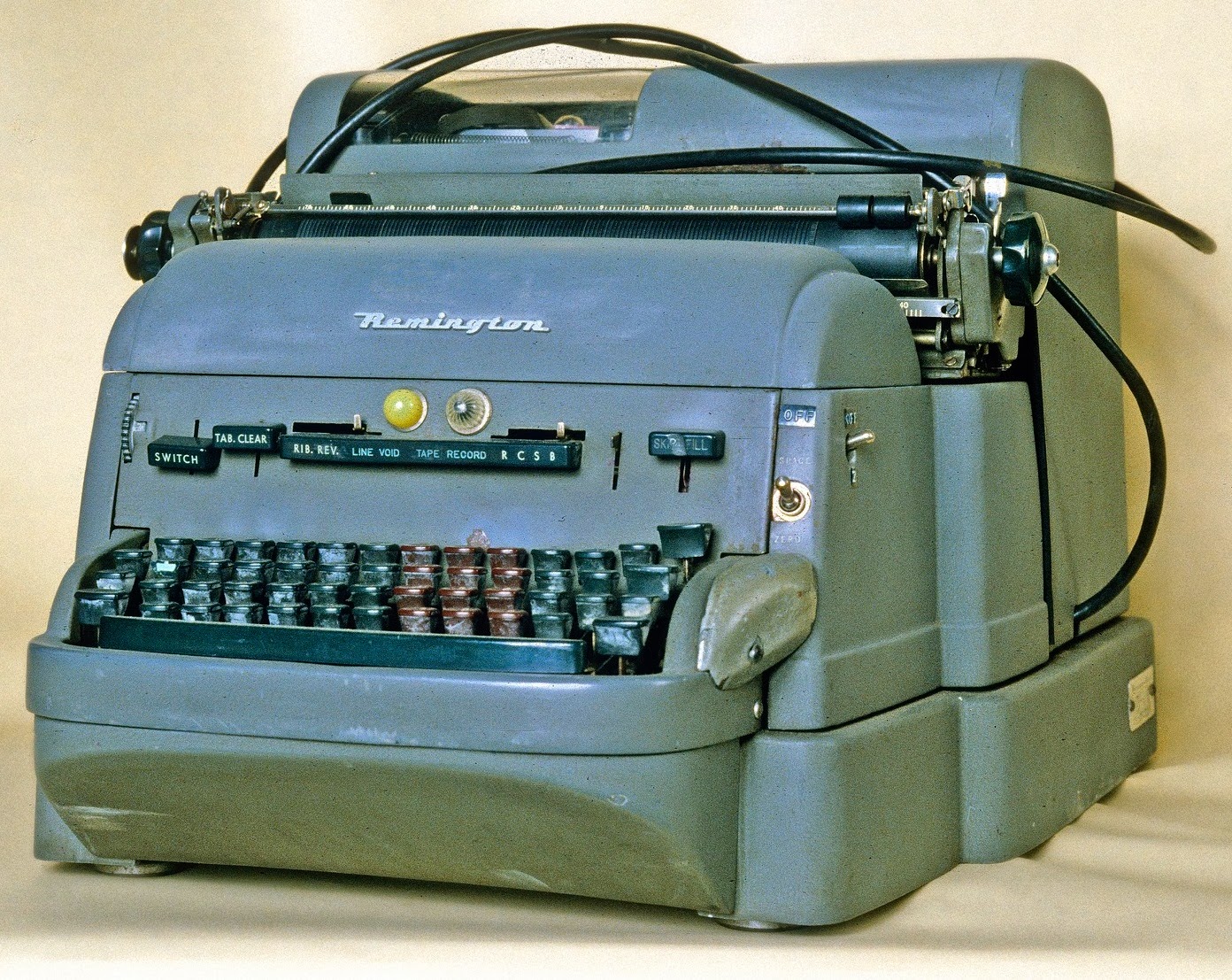 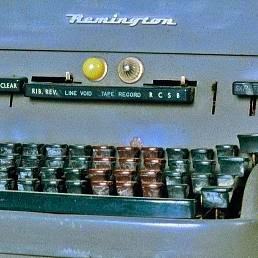 The Remington Rand UNITYPER was an input device for the UNIVAC I computer (UNIVAC: Universal Automatic Computer). It was an early direct data entry system. The UNITYPER accepted user inputs on the keyboard of a modified Remington typewriter, then wrote that data on to a metal UNIVAC magnetic tape using an integral tape drive. 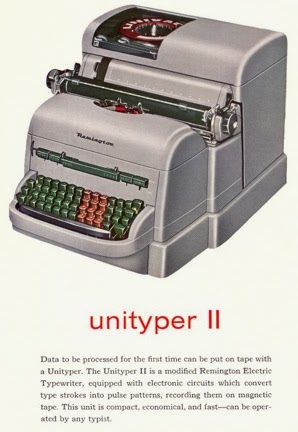 The Unityper II was an input device for the UNIVAC II. The Unityper II was a reduced-size, reduced-cost version of the Unityper I, developed as a text-to-tape transcribing device for the original UNIVAC system. While it is shown as a peripheral for the UNIVAC II, it was developed for the original UNIVAC and released in 1953. Whereas the original required individual motors and control amplifiers to advance, rewind, fast-forward and maintain tension on the tape to be recorded, the later version was able to perform all of these functions using the electric typewriter's single internal motor through a flexible cable and clutch system.

Coding was accomplished through mechanical lift arms and latching bails added to the typewriter's existing mechanical linkages in place for print-action. When a key was depressed, up to eight affiliated lift arms were "caught" on latching bails which in turn connected eight coding switches to the recording head. A commutator, powered by the internal drive motor, would momentarily complete the power circuit through the coding switches to the recording head before advancing the tape to the next recording position. When not encoding, a resistor balance network kept the recording head in an erase mode unless a rewind operation was commanded. This ensured a clearly defined magnetic space between bit patterns. Additional circuits prevented opening of the tape loading door once a tape was loaded. 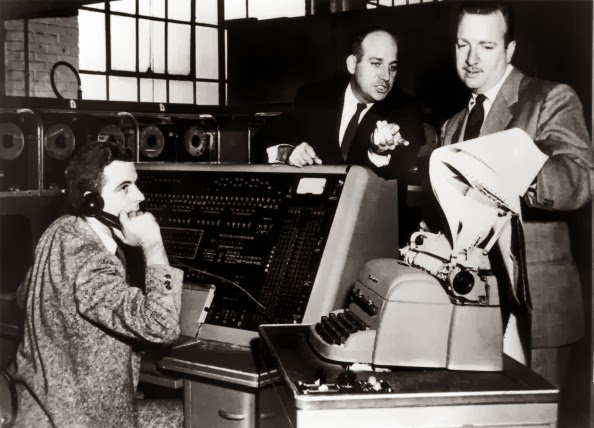 A "Supercalculateur" Univac computer was used in the 1952 US elections. Here Walter Cronkite, right, looks at the results coming off the typewriter.
Because the supply and take-up spools of the recording tape were no longer individually powered as in the UNITYPER I, a mechanical solution consisting of a differential spring, ratching escapement and slip clutches was developed to overcome the problem of "differential moment" of accurately moving tape across the head. This was necessary because the supply reel is always decreasing in effective diameter while the take up reel is increasing in effective diameter as the tape moves from one reel to the other during encoding, and again when backspacing or rewinding. - Wikipedia. 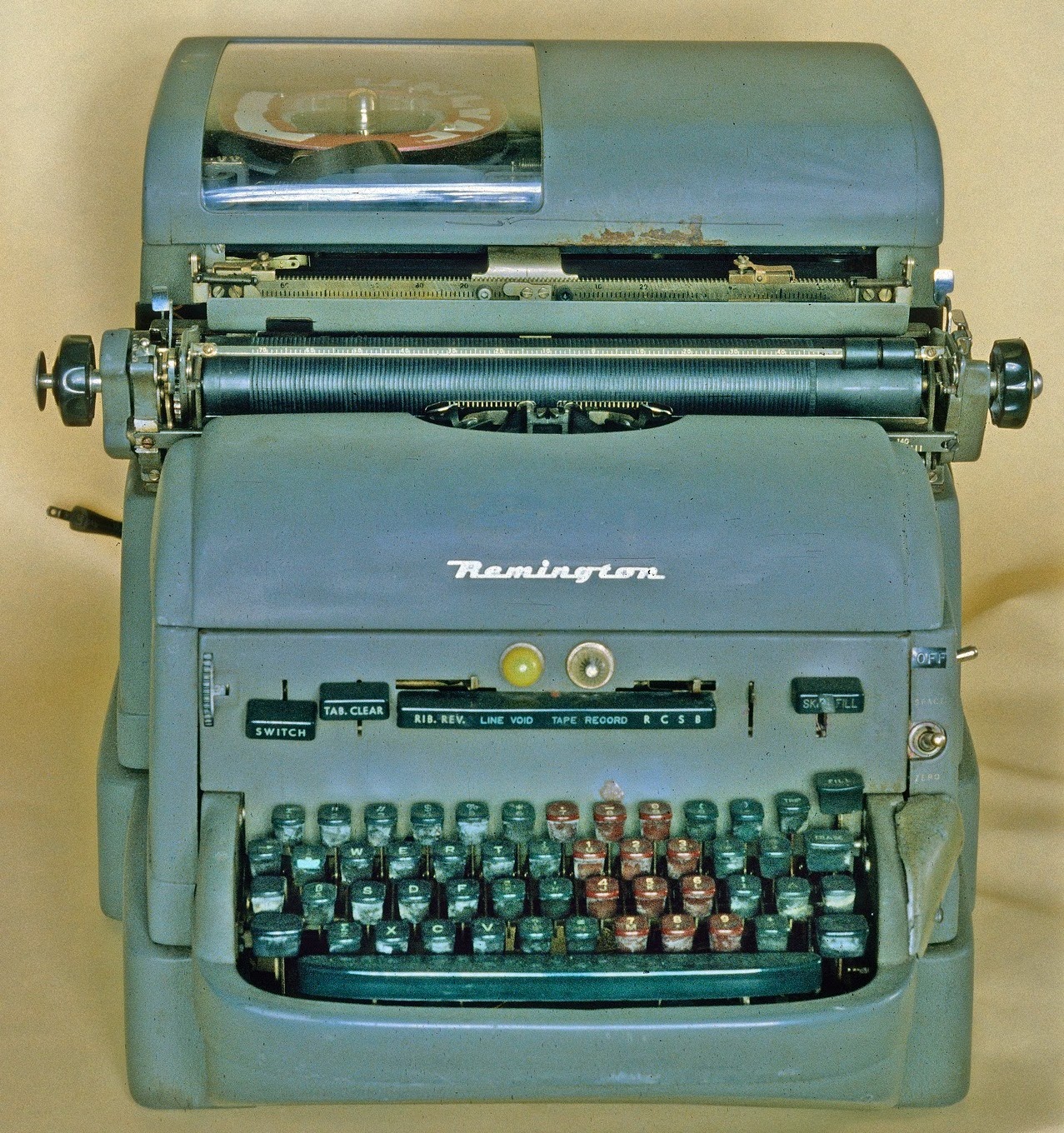 In 1955, the Reverend John W.Ellison (below) came up with an idea to produce a written index of the Bible using a Unityper at the Univac computing laboratory. The project took six months to complete, even though a Unityper could type data from Univac at a speed of 10 characters per second. 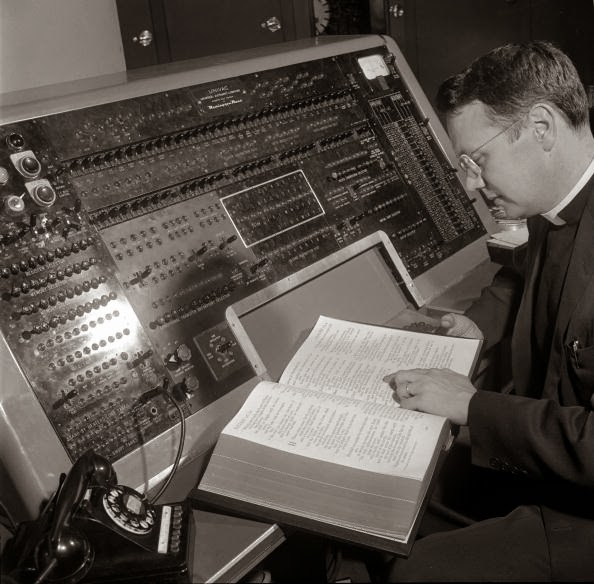 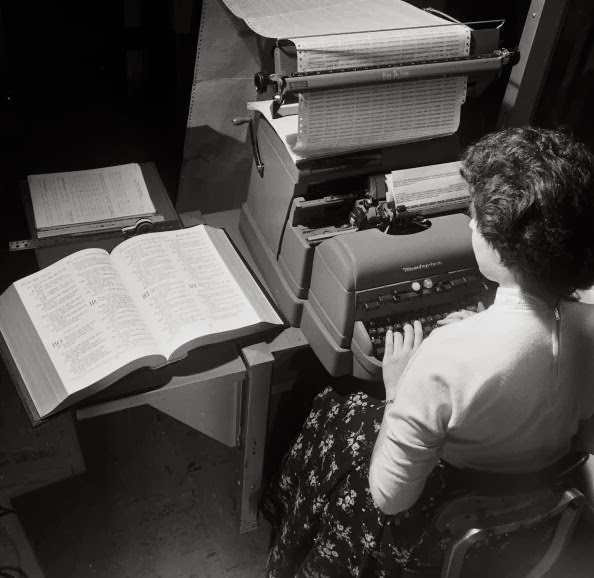 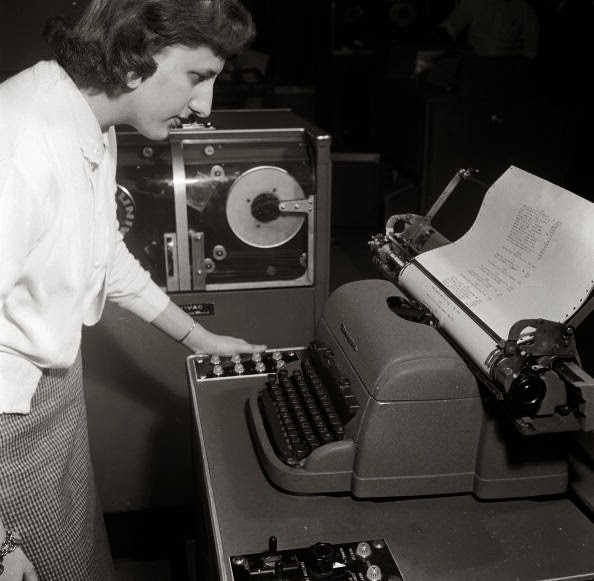 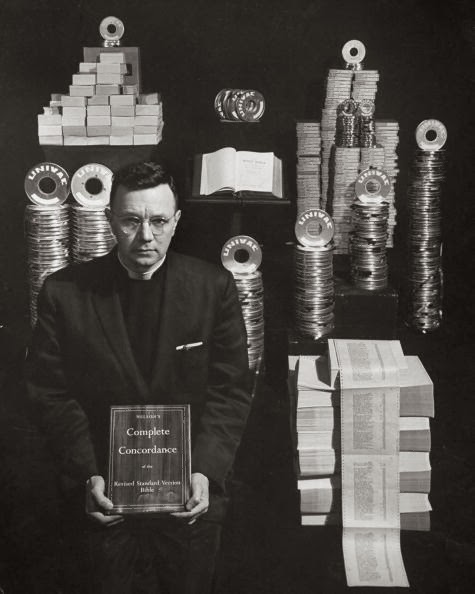 The Reverend Ellison with the end results. 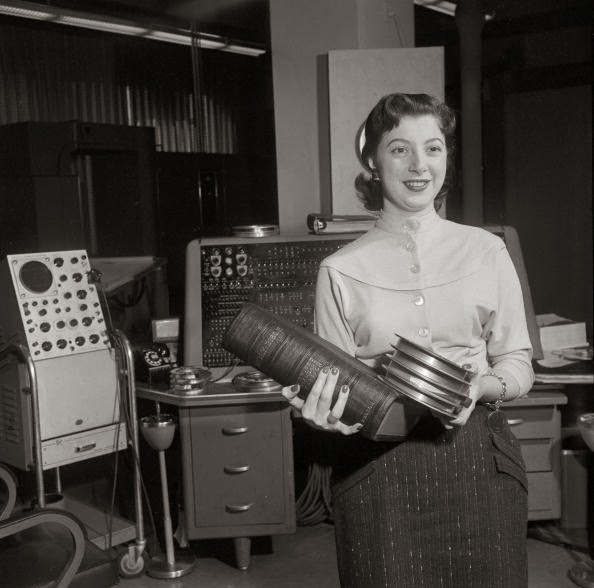 Four reels of magnetic tape on which the Bible was indexed. 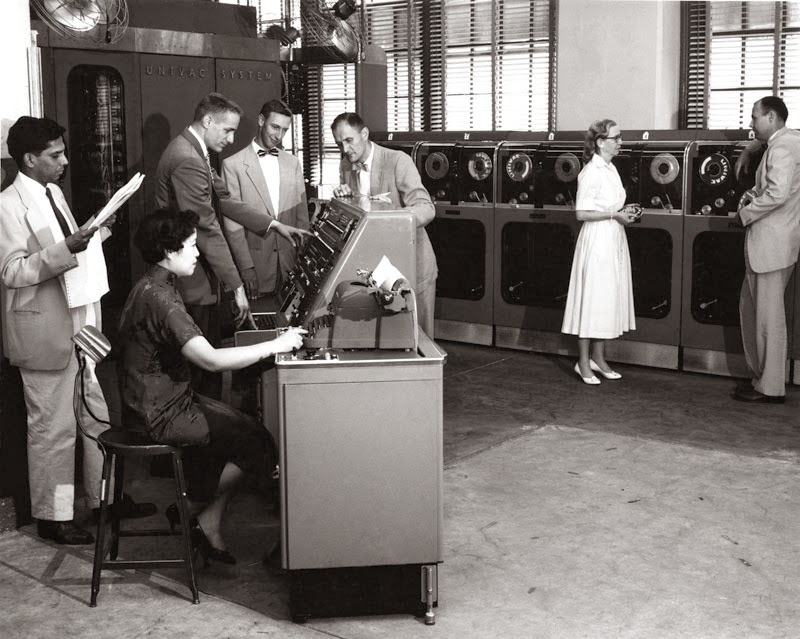 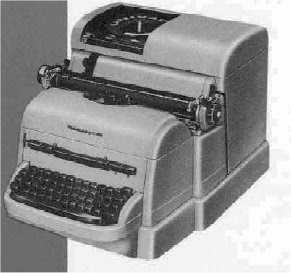 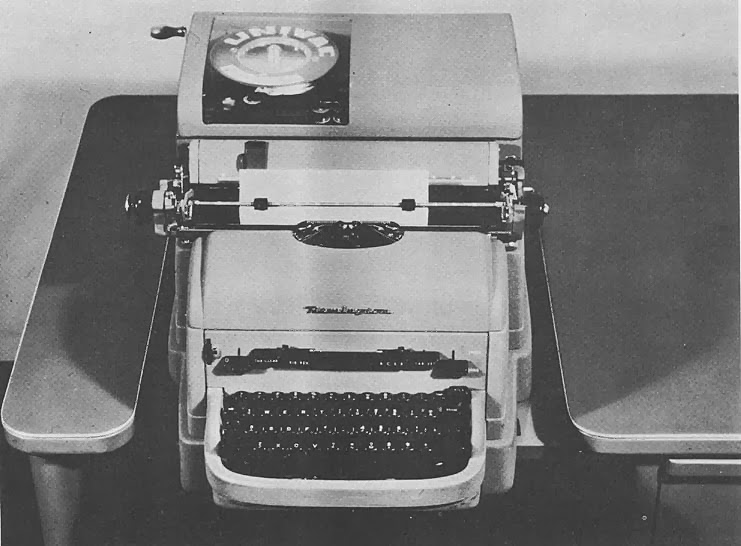 A PDF of a Univac II brochure can be found here.
Posted by Robert Messenger at 01:37

That's a monster. Looks like the top half of a teletype. There's also a neat old Tektronix oscilloscope near the end. I can't tell if it is a 545 or older. I do remember those. Wonderful old scopes.

Musts have been neat to work on that early computer.

Impressive! The thing must have cost a bundle and it looks quite sophisticated for the time. I can recognize some features of the familiar Remington 17 and KMC. This will go on my wish list next to a Remington Statesman proportional typer.

The brochure is quite interesting. Today it's hard to imagine a computer system without any screens.

The brochure says the Univac II had a memory capacity expandable to 120,000 characters. That's only about 120 MB!

I like this statement: "Electronic computers are not actually 'giant brains,' as they are popularly called; they are extremely efficient but totally unimaginative servants to those who use them."

I know that there was another keyboard entry device derived from an IBM electric typewriter. Flexowriter it was called. These cobbled together typewriter/computer terminals are fantastic!

Oh my gosh, Ted, you are right, of course. How could they do anything at all with 120K?

I remember 4-bit uPCs and having to put up a fight for more than 128k of RAM. One just ran many many iterations of code. Remember waiting sometimes over an hour for your report?