The Way Things Were in the Days When We Used Typewriters 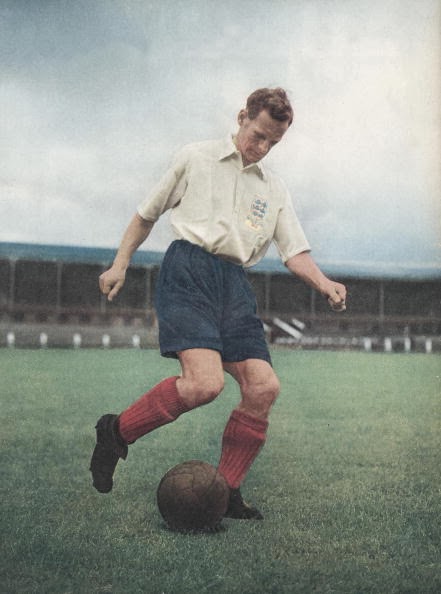 They don't make 'em like this anymore.
One of the saddest realities of growing old is the regular monotony with which one's boyhood heroes (and heroines) shuffle off this mortal coil. I happened to switch across to SBS World News last evening, just in time to chance upon the announcement that English soccer legend Sir Tom Finney had died on St Valentine's Day. He would have turned 92 on my birthday, April 5.
Finney had been a hero of mine since I was 10. I read his life story serialised in the weekend newspapers. I devoured articles about his exploits in the "boy's own" English weeklies of the day. I saw grainy newsreel footage of him playing for England at Wembley. And then I got to see him play for England in the flesh.
SBS, being Australia's "ethnic" channel, the one that broadcasts soccer (once called "Wog Ball" in this country), was probably the only network to run the story of Finney's death.  But, then, how many Australians today have ever heard of Finney, regarded by Sir Stanley Matthews as having been right up there with Pele, George Best and Maradona? I also saw Best and Maradona play, and in my humble opinion they weren't fit to tie up the laces on Finney's Cotton Oxford boots. Indeed, I didn't see another player light up a stadium like Finney until Liam Brady came along in the 70s.
But Stanley Matthews would know better than I. He and Finney were classic contemporary wingers, and Finney was known to have kept Matthews out of post-war England teams. That's how good he was! But against Portugal in Lisbon in 1947, they played together for the first time, Matthews pushed to the right, Finney in his natural position on the left. England won 10-0!
(I must 'fess up that Finney was also in the England team which was beaten by the United States 1-0 at the Estádio Independência in Belo Horizonte during the 1950 World Cup finals in Brazil.)
Tommy Doherty said "Messi is Finney reborn." Bill Shankly regarded Finney as the greatest player to ever play the game. Once asked how a young up-and-coming star compared to Finney, Shankly replied, "Oh, aye, he's almost as good as Finney now. But bear in mind that Tommy's almost 60, he's slowing down a bit!" 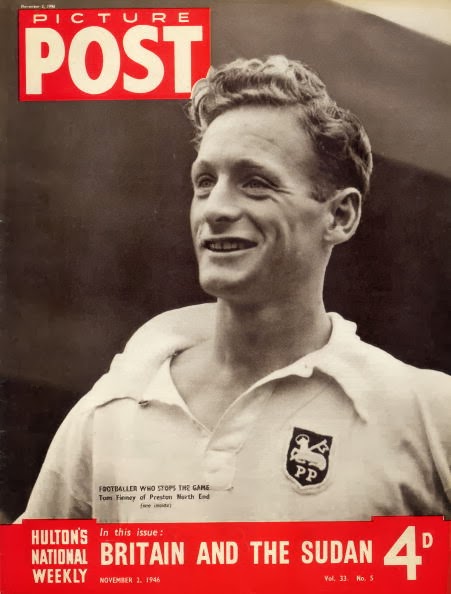 Tom Finney's passing reminded me of one of my favourite sporting stories. It's a cherished story because it involved one of my closest mates, well-known Australian newspaper journalist Robert David ("Bob") Ferris, who died in Canberra minutes after visiting me on my 59th birthday, in 2007. Bob often told me this story himself, which made it all the more memorable.
Bob was born in Wellington, New Zealand, on Boxing Day 1939 and started his illustrious newspaper career as a cadet reporter on The Dominion in Wellington in 1957, still aged 17. In those days, cadets had to learn their trade by covering a wide range of crappy little events, such as flower shows, that no senior reporter wanted to attend. Cadets also had to work weekends and cover minor sport.
Soccer was very much a minor winter sport in New Zealand back then and Bob drew the really short straw by being assigned to write about the Wellington club soccer being played on freezing Saturday afternoons at the Basin Reserve. It didn't matter so much to Bob, who had little interest in sport anyway. But at least it pleased his father, Frederick Cecil Ferris, who was born in Woolwich, England, and who persisted in following soccer in a country where this form of football was considered a "foreigner's game" and a "sissy sport". 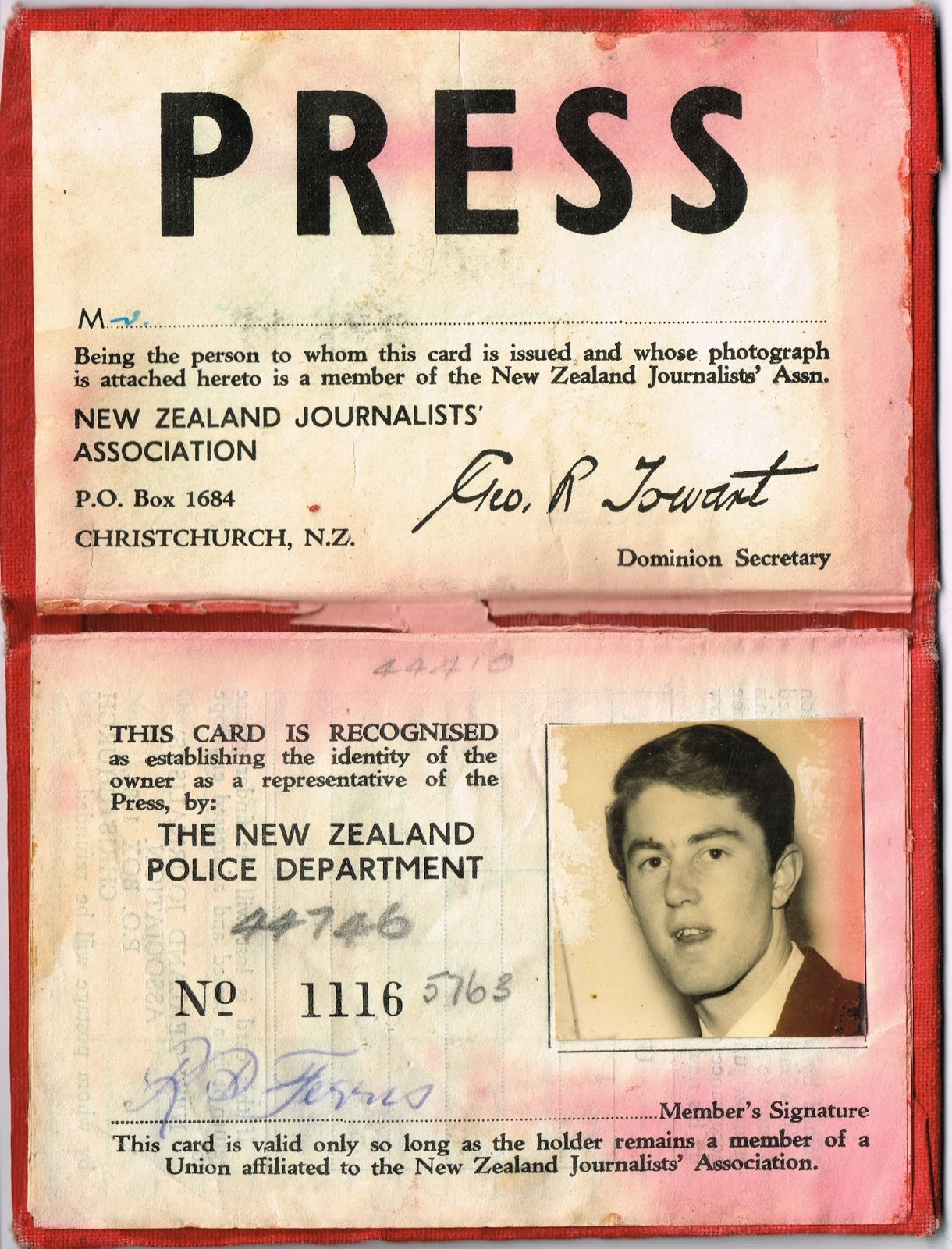 Bob Ferris' Press Card when he covered the
1961 England soccer team's tour to New Zealand.
In 1961 Tom Finney led an England soccer team (the "FA XI") which included Bobby Moore on a tour of the Far East, New Zealand and the United States. (They were unable to play, as scheduled, in Australia, because FIFA had banned Australia from international competition over poaching allegations.)
I watched England beat Canterbury province 11-1 at English Park, Christchurch, on the Saturday afternoon of June 3. That evening, the England team caught the overnight ferry from Lyttelton and arrived in Wellington early the next morning. 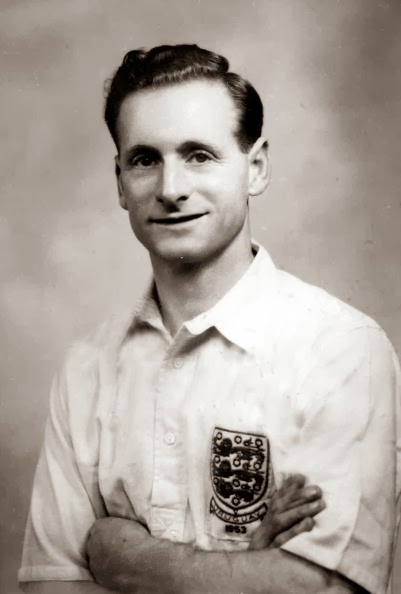 Tom Finney in his England shirt. Compare this to the rubbish international players have to put on their backs these days. Nothing but billboards!
In those days in New Zealand, the country closed down every Sunday. It was past moribund. Nothing happened, there was no life whatsoever. Shops didn't open, pubs couldn't sell beer, there was nowhere to go and nothing to do. Worst still, this particular weekend was a Queen's Birthday weekend, which meant the Monday was a public holiday, and there would be nothing open for two whole days!
It must have been an unpleasant surprise for the England players to arrive in a nation's capital city and find it completely shut down. My friend Bob, just doing his job, met the England players as they disembarked at Wellington harbour. Taking pity on them, and realising that until they played Wellington province at the Basin Reserve the following afternoon, there would be nowhere for them to go and nothing for them to do, he offered to take them to his own home, at 22 Ebdentown Street, Upper Hutt. 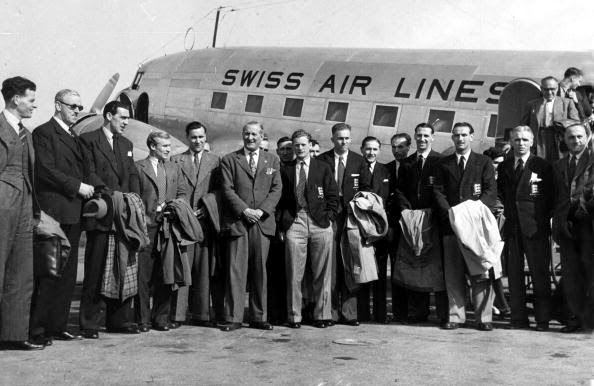 Tom Finney is in the middle of this England team which has flown into Zurich to play Switzerland in 1947.
Now this was an astonishing thing for a 21-year-old cadet reporter to suggest, but Bob knew his father would have some half-gallon flagons of beer in the fridge, and those alone would offer the England players some welcome respite from complete and utter boredom. At least it was somewhere for them to go, something to do, someone to meet.
Bob also knew that his father, who remained passionate about English soccer, would get the absolute shock of his life when players he had idolised for years, but had only ever read about, walked in through his front door!
Imagine the look on Bob's father's face when that door opened and into his lounge walked Tom Finney and Bobby Moore and a dozen other England soccer internationals!
OK, we've advanced a lot in 52 years. Our cities now stay open on Sundays, there is always something for people to do, places for them to go, things to see. But I reckon we have lost something, too - in fact, we've lost a lot.
Imagine today a group of some of the world's most famous sportsmen wandering off on a Sunday afternoon to a suburban home, led by a young reporter to his own house, to meet his old man and sit down and have a few quite beers and chew the fat. Unthinkable, utterly, totally, completely out of the question. And that, in its own way, is sadder than hearing Tom Finney had died.
* To the best of my knowledge, Tom Finney never used a typewriter, but he was no lesser the man in my eyes for that. Bob Ferris did, an Olivetti Lettera 22. I placed Bob's typewriter on his coffin the day he was cremated, which would have been Bobby Moore's 66th birthday.
Posted by Robert Messenger at 16:32

Great post! I must have just missed the end of Finney's playing career. I remember meeting Bobby Charlton and Denis Law on a school trip to Old Trafford - that was probably 1971. My only in-the-flesh encounter with football legends.

Excellent stuff! It really evokes memories of a New Zealand long gone, and the brilliance that was Sir Tom Finney. That photo of the England team in 1947 certainly bears closer inspection: what a team! Alongside Finney in the photo, are Wilf Mannion, Raich Carter, Neil Franklin, "the two Stanley's "(Mortensen and Matthews), Tommy Lawton, the greatest centre forward of them all, and Frank Swift, the brilliant goalie who later died in the Munich crash. Oh and I can see a little bit of Billy Wright's bonce to the left of Sir Tom. Has there been a greater England team? I think not...