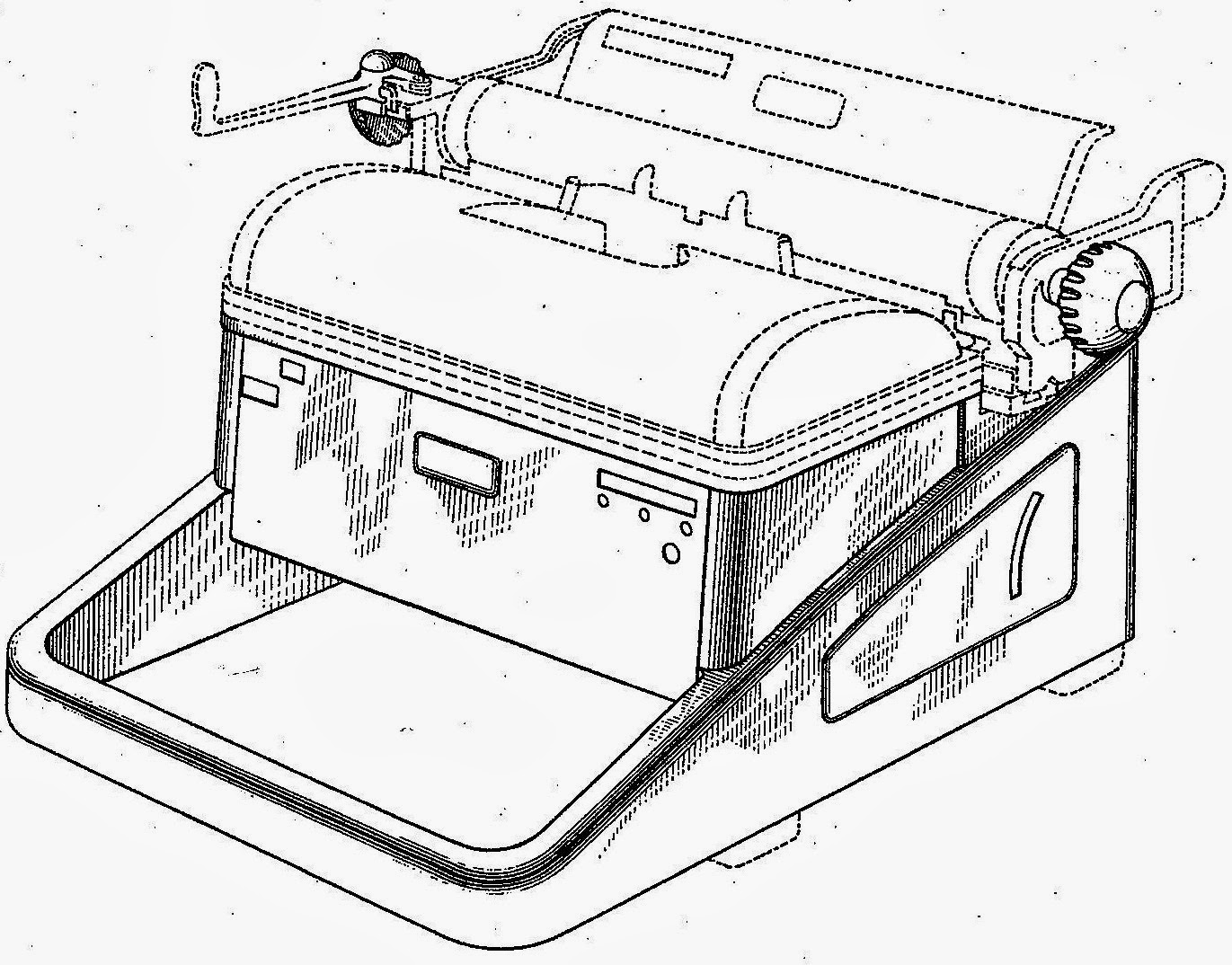 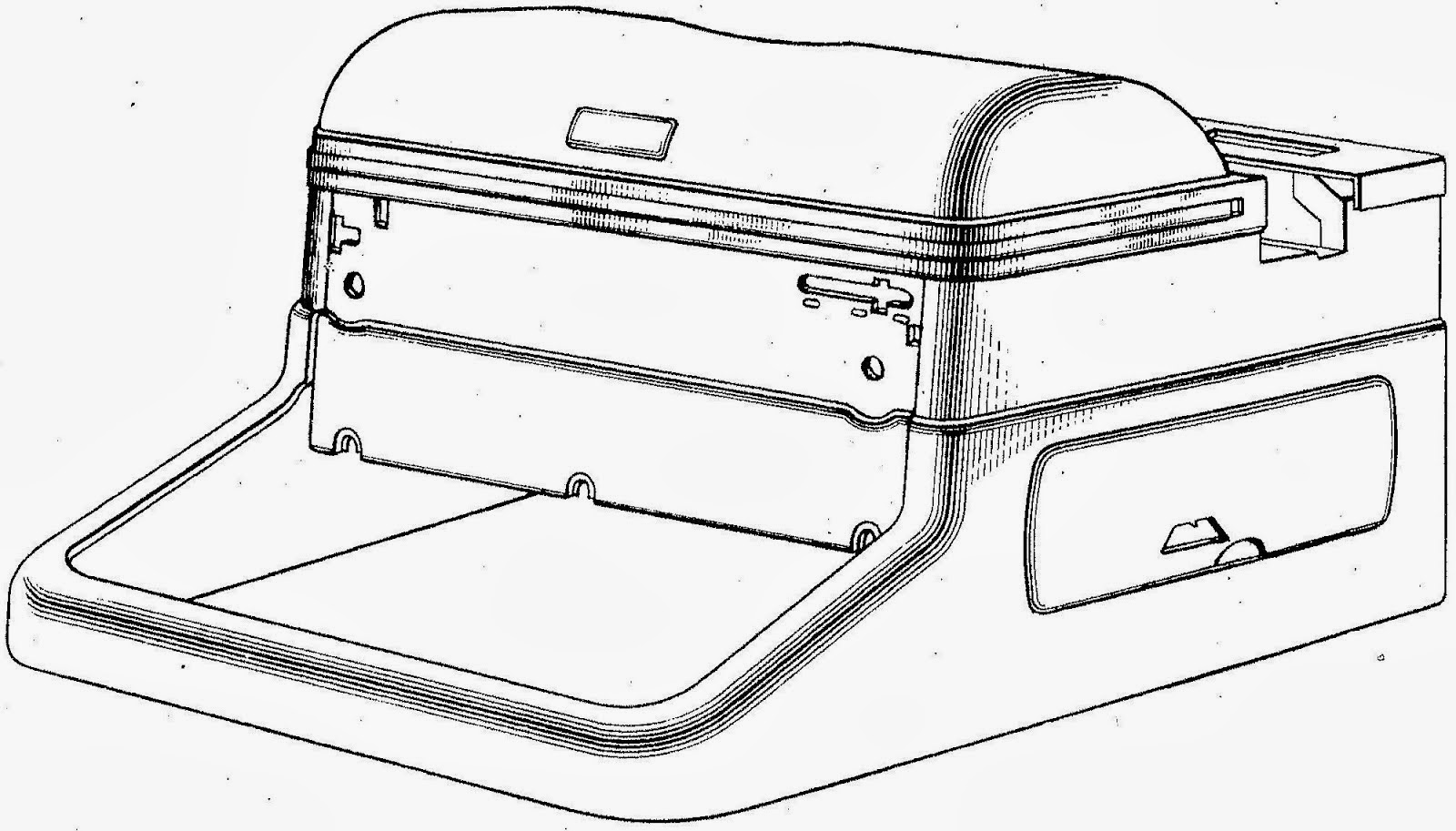 The Dowd-Hart design which Royal accepted. The major differences are the sloping sides on the Dreyfuss design and the changed front section(s). 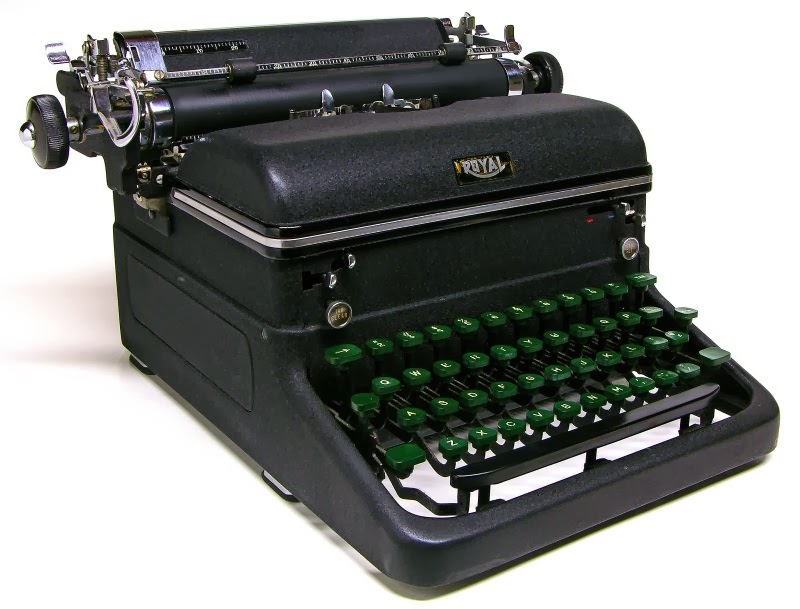 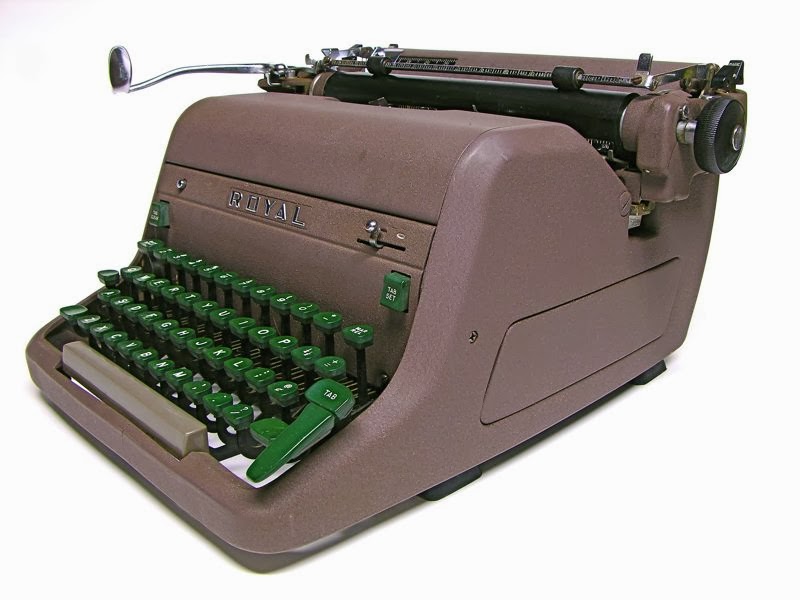 Royal HH: Alan Seaver Collection
The simple answer is "No". As one will see from my November 2012 post on the HH, it was designed in 1952 by John Felix Kloski (1902-1983), the engineering superintendent of Royal's research staff at the Royal laboratory at 150 New Park Avenue, Hartford, Connecticut. 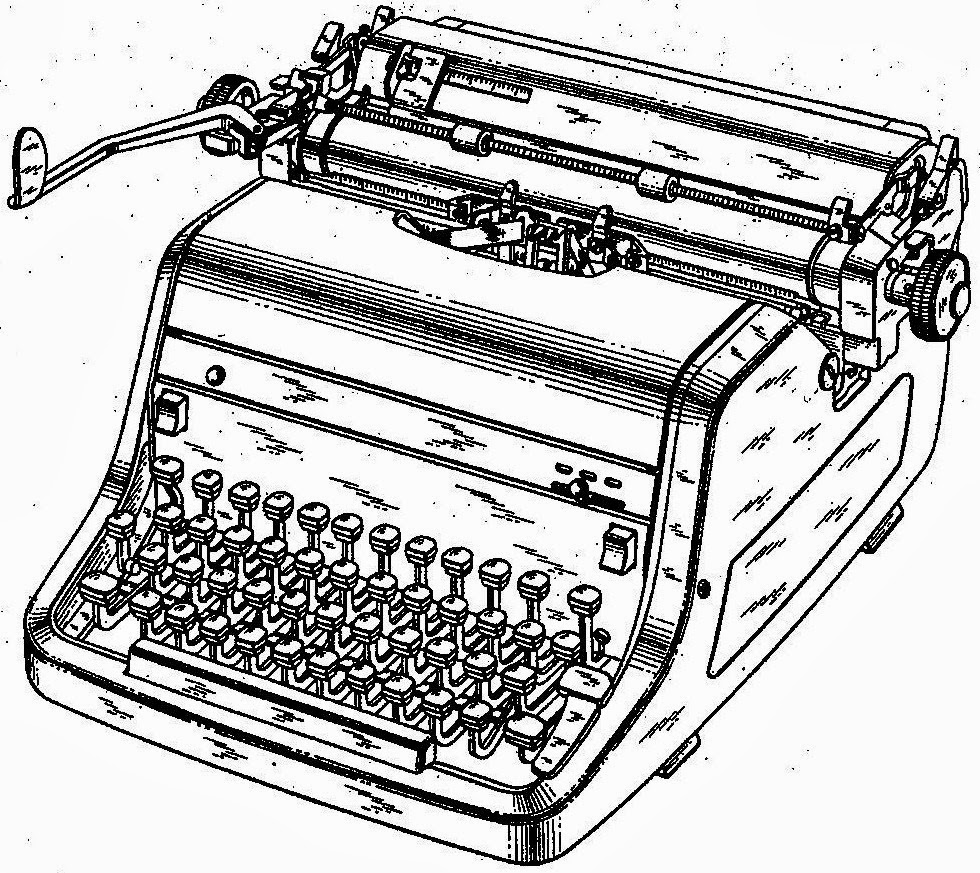 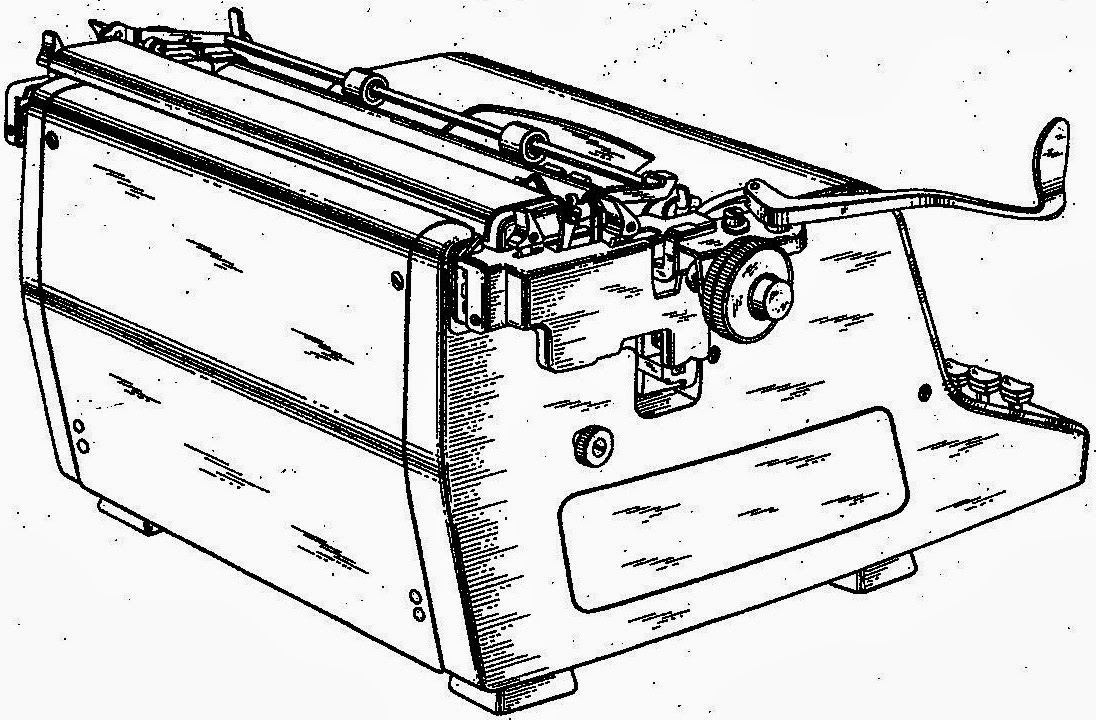 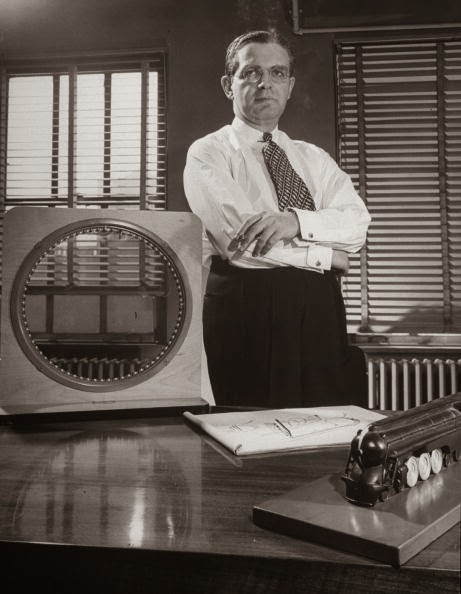 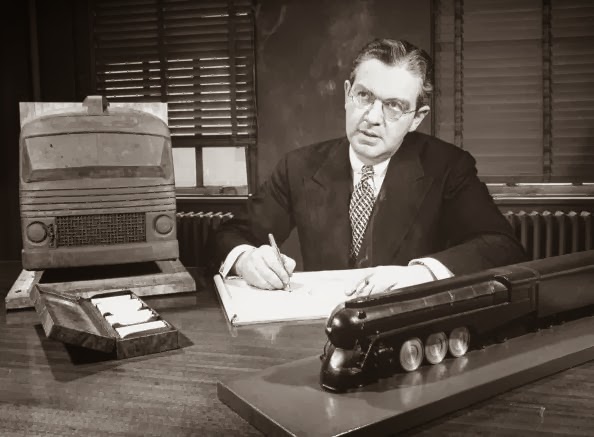 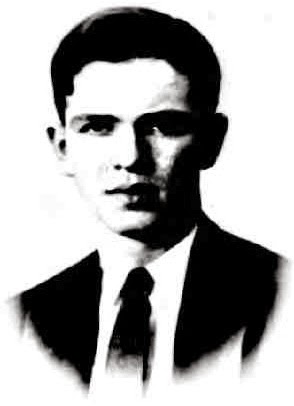 The young Henry Dreyfuss: His passport photo in 1922
It was previously thought Dreyfuss (1904-1972) was only commissioned by Royal to come up with two designs for the Quite DeLuxe portable in August 1945. 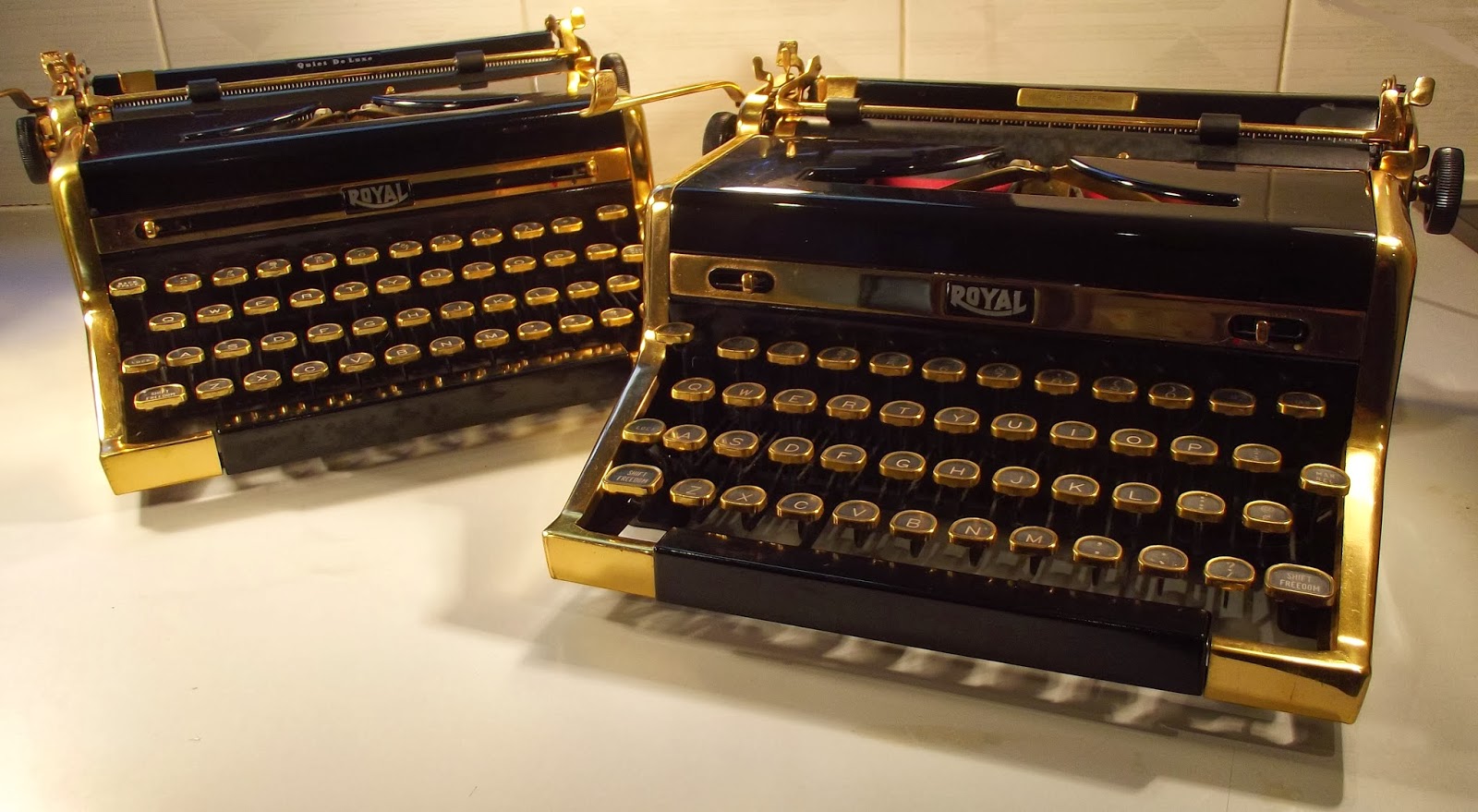 However, before this great and hugely influential industrial designer became quite as famous as he did in the immediate post-World War II period, he was also commissioned by Royal to design the KMM standard-sized typewriter.
Dreyfuss filed for a patent for this design on October 17, 1938, 18 days after Bernard Joseph Dowd and Henry Joseph Hart had applied for a patent for their quite similar design. Royal decided to go with the Dowd-Hart "in-house" design over that of Dreyfuss. 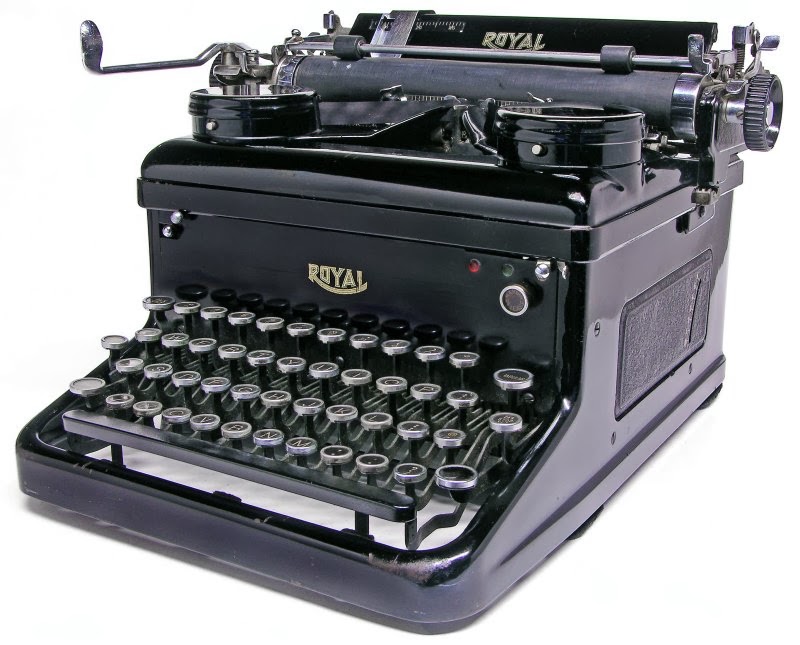 Royal KHM: Alan Seaver Collection
Dowd and Hart had also designed the Royal KHM in 1934, as well as the Model 0 and the DeLuxe portables in 1935.
When Dreyfuss came up with the 1945 design for the Quiet DeLuxe, Royal was proud to advertise that fact: 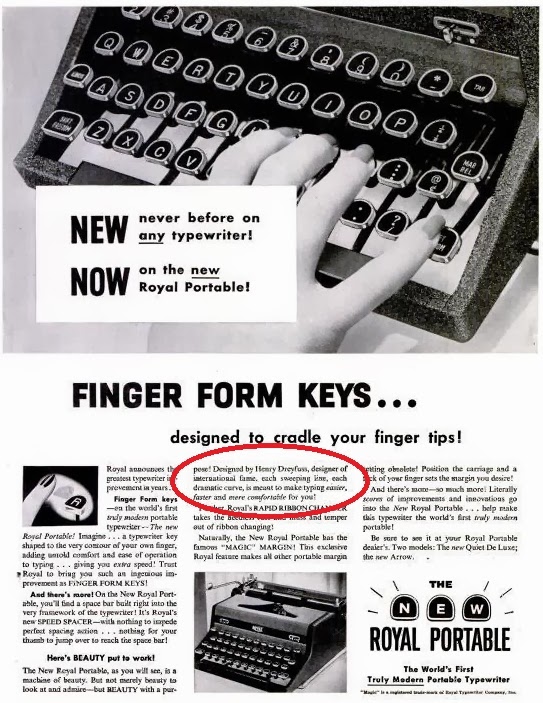 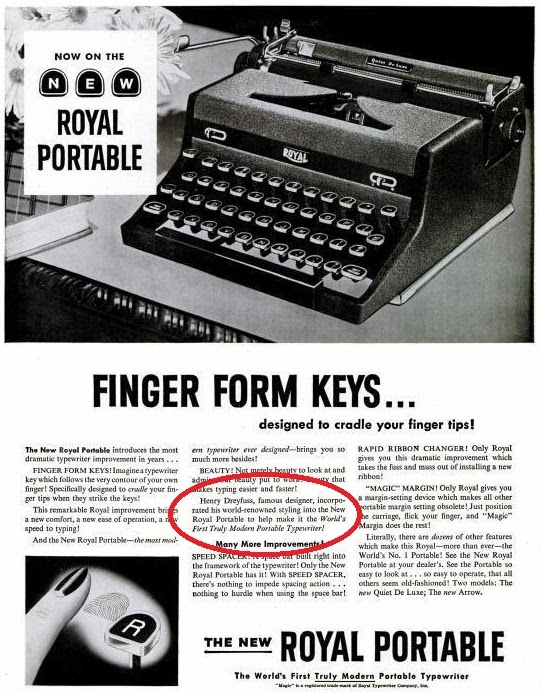 By that time, of course, Dreyfuss was America's No 1 industrial designer. After all, he had designed the Western Electric 302 tabletop telephone for Bell Laboratories in 1930, the New York Central Railroad's streamlined Mercury train, both locomotive and passenger cars, and the Hoover Model 150 vacuum cleaner, both in 1936, the popular "Democracity model city of the future" for New York 1939 World's Fair at the Trylon and Perisphere (two postcards below, in construction under that), the styled John Deere Model A and Model B tractors and the NYC Hudson locomotive for Twentieth Century Limited, all in 1938, the classic Westclox Big Ben alarm clock in 1939,  and the Wahl-Eversharp Skyline fountain pen in 1940 (below). 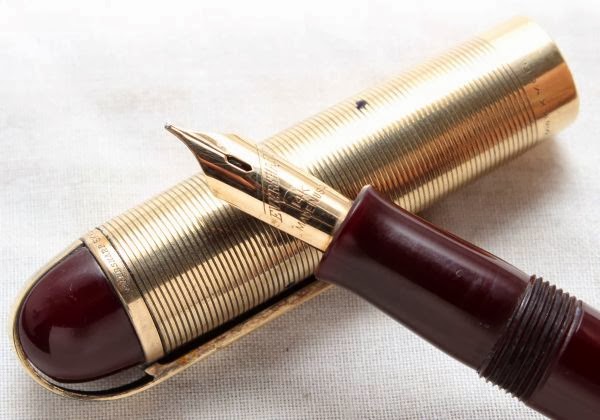 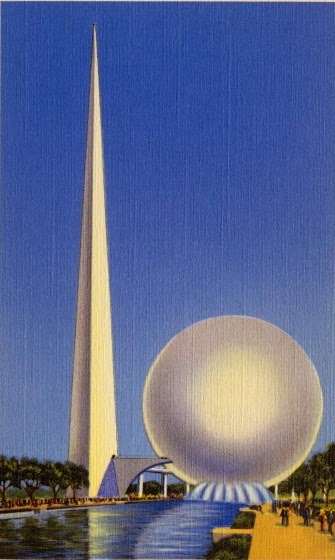 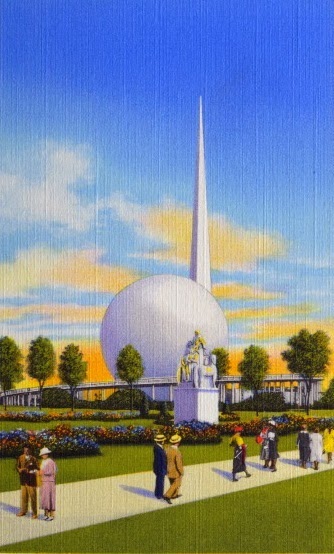 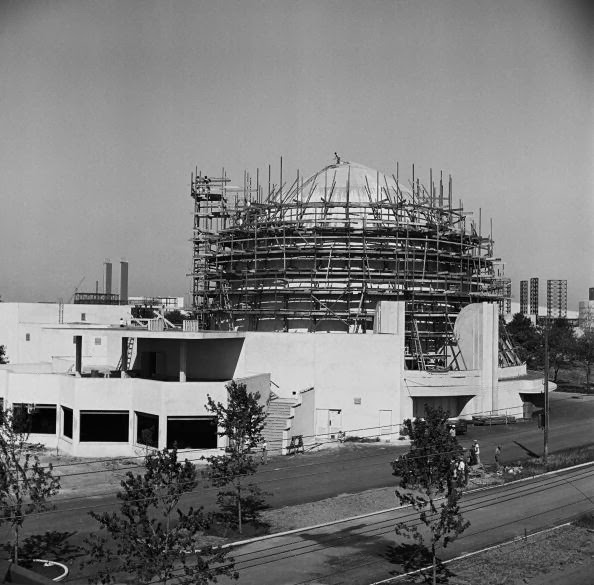 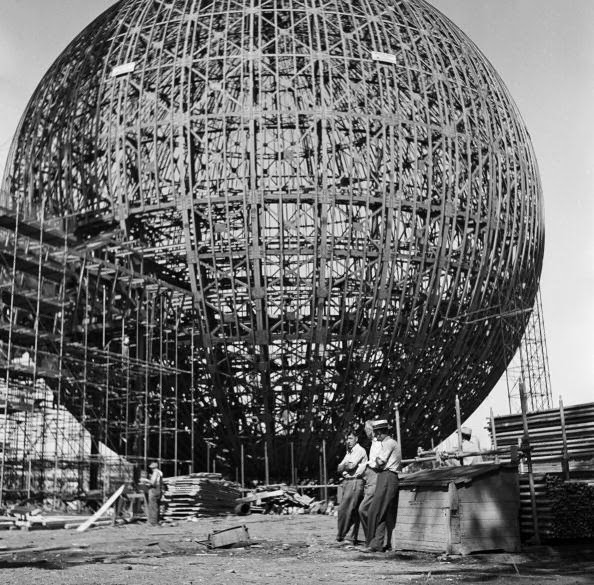 Here is LIFE magazine's August 1938 take on Dreyfuss' task in designing the Democracity: 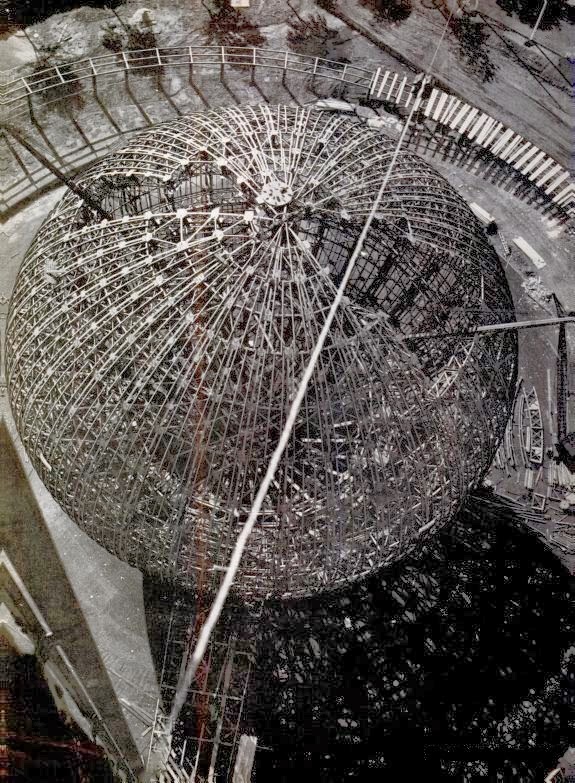 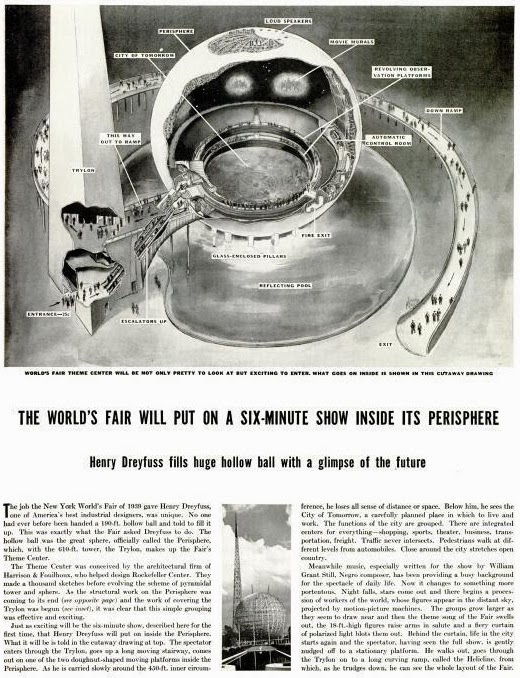 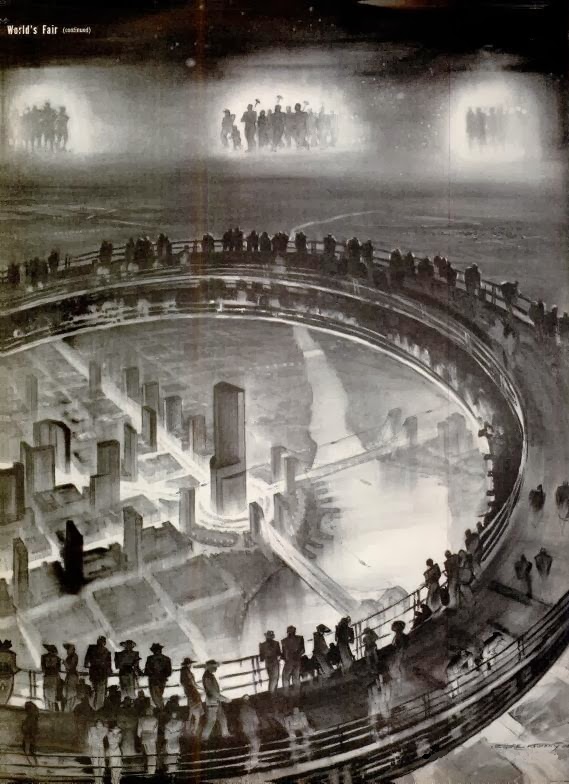 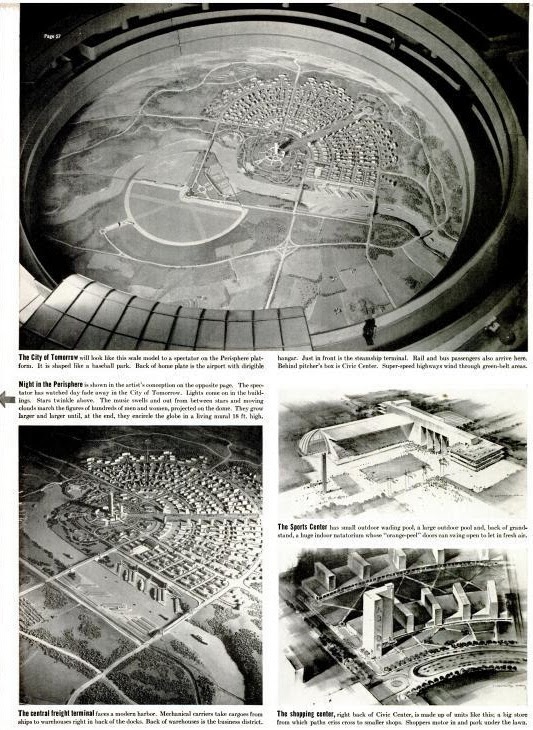 After the war, Dreyfuss designed the 500 desk telephone (1949), a Bell System standard for years (photo below), the two American steamships, SS Independence and SS Constitution, for American Export Lines (1951-2), the Honeywell T87 circular wall thermostat (1953), the spherical Hoover Model 82 Constellation vacuum cleaner which floated on an air cushion of its own exhaust (1954),  the Hoover Model 65 convertible vacuum cleaner (1957), the Princess telephone (1959), the Bankers Trust Building at 280 Park Avenue in Manhattan, (1963), the Trimline desk telephone (1965) and the Polaroid SX-70 Land camera (1972). 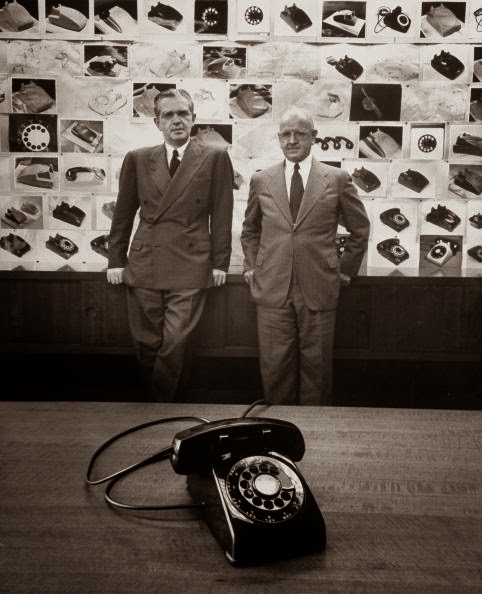 Dreyfuss in 1949 with Bell vice-president and co-inventor William J.Martin and the 500 desk telephone. 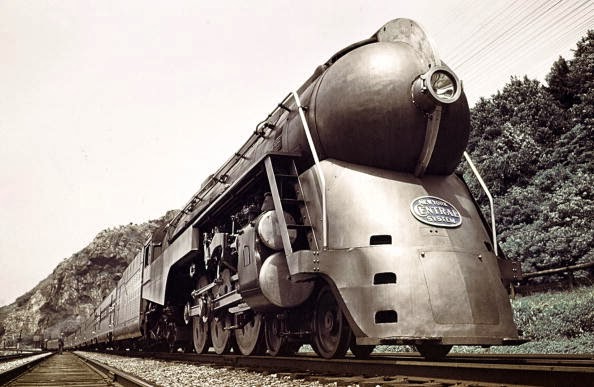 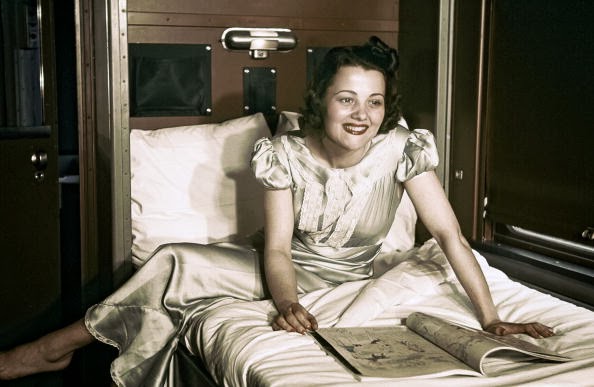 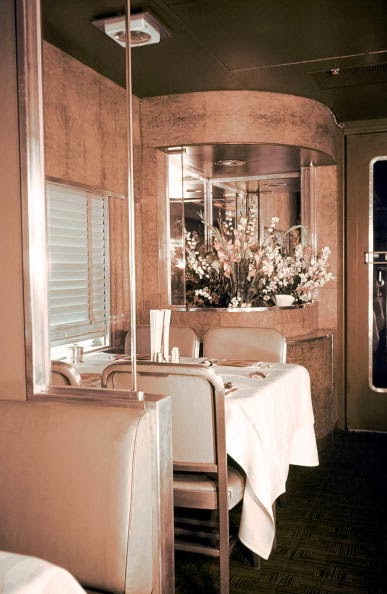 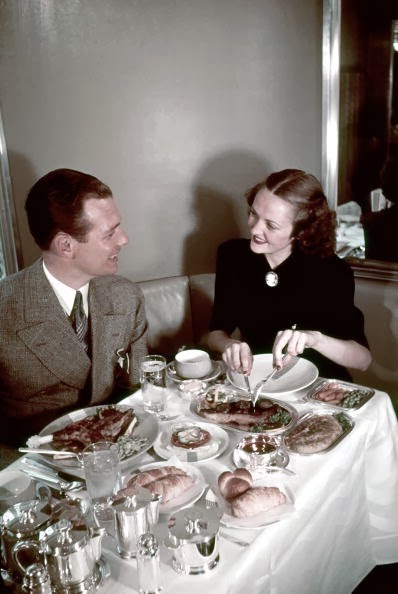 Posted by Robert Messenger at 13:43

Mr. Dreufuss was quite a fellow! All of those wonderful designs of ever day items. I knew of the locomotive, but I did not realize the same man designed so many other wonderful things.

Wow, and thanks for answering my questions!! I have several of his designed items, including the 150, and the Constellation vacuums. and the Princess and Trimline phones. I didn't know at the time that they were his, but was drawn to their superior design. I unfortunately don't yet have one of his typewriters, but soon will I hope. It's too bad that the locomotives aren't on display somewhere- what beauties!!!
As always, you've outdone yourself with the thorough research, and presentation - I/we are most grateful! Thanks

How neat to see a Dreyfuss-styled KMM design! I had no idea.

The very triangular side reminds me of the Bar-Locks of the 1920s or '30s.

I read this piece with great interest as I do pretty much everything on your blog. I've long wondered who did the comparable body design work for the Smith-Corona Super 5 series. You say in a previous post on the 1960-62 Smith-Corona Galaxie and Corsair designs that Joseph Barkdoll designed the 5 series, and elsewhere that he was responsible for the 5TE. Do you mean that he was responsible for the mechanical design of the typewriter, the body design, or both? I see those typewriters described sometimes as not much to look at, but I think early 5 series in particular are masterpieces of mid-twentieth century design, and I'd love to know for certain who was responsible for the look.

Joe Barkdoll and Hal Avery were responsible for the mechanical design of the 5 series, which simply evolved out of their work together dating back to the 1920s. But Barkdoll designed the "electrified" mechanics of the 5TE. The body design of the 5 series remains a mystery, but both Will Davis and I suspect it may have originally been assigned to another company and picked up by Smith-Corona. I'm pretty sure Will has written on this in ETCetera.