I mentioned a little while ago that there is going to a major Zine Festival in Canberra next month (March 22-23), during which I will be giving a typewriter presentation. The invitation to take part follows my guest speaker role in the hugely successful I Am Typewriter Festival held in Melbourne in 2011. 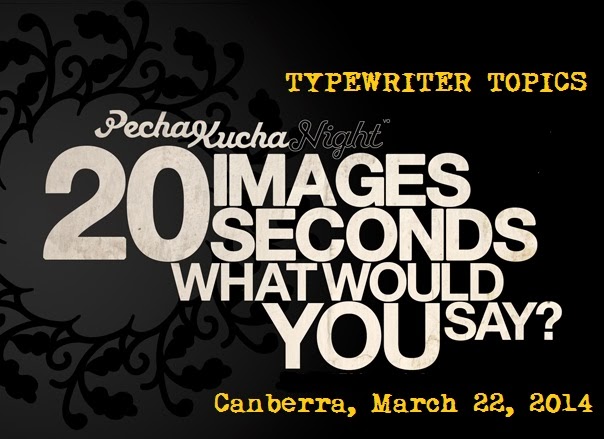 As part of the coming Canberra event, I am also taking part in a PechaKucha Night - I will present 20 images of 20 of my favourite typewriters (or 20 of my favourite typewriter images) and talk for 20 seconds on each of them.
PechaKucha, the Japanese term for the sound of conversation (“chit chat”), is a presentation style in which 20 slides are shown for 20 seconds each (six minutes and 40 seconds in total). The format, which keeps presentations concise and fast-paced, powers multiple-speaker events called PechaKucha Nights (PKNs).

The PechaKucha Night was devised in February 2003 by Astrid Klein and Mark Dytham of Tokyo's Klein-Dytham Architecture (KDa), as a way to attract people to SuperDeluxe, their experimental event space in Roppongi, and to allow young designers to meet, show their work and exchange ideas. 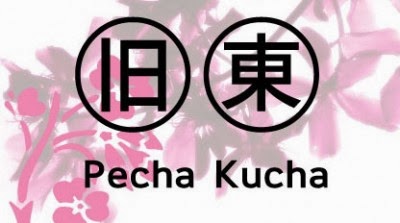 In 2004, a few cities in Europe began holding PKNs. As of June 2012, PechaKucha Nights were held in 534 cities worldwide. A typical PechaKucha Night includes eight to 14 presentations (there will be nine the night I take part).
The presenters (and much of the audience) are usually from the design, architecture, photography, art and creative fields, but also from academia. Most presenters are design professionals showing their creative work, but presenters often speak about such topics as their travels, research projects, student projects, hobbies, collections or other interests. 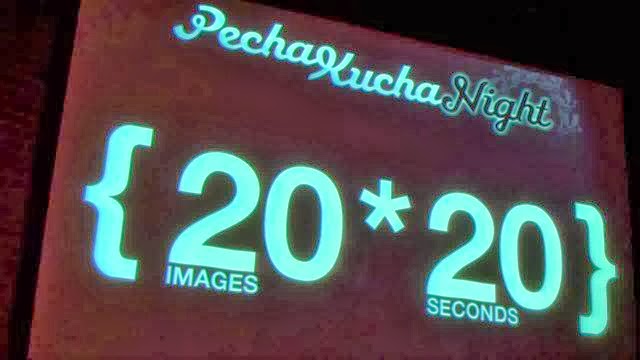 Klein and Dytham's original goal was to create a space where designers could share their ideas and passions with others. However, knowing how dangerous it is to give a designer a microphone, they decided to put some checks in place, in order to prevent speakers from droning on and on.

My fellow presenters on the night will be Tasha of Zine Thing, Melbourne; Luke of the Sticky Institute, Melbourne (hosts of I Am Typewriter in 2011), Ferz or Yasmin of Rip Publishing, Canberra; Sadfar of the Refugee Arts Project, Sydney; Janet of Make, Hack, Void, Canberra; Sophie of
I Am Very Busy & Important (Zine), Melbourne; Jo of the Rizzeria Workshop, Sydney; and Nat of the Canberra Zine Emporium, Canberra (my host).
Now, what are my 20 favourite typewriters?
or
My 20 favourite typewriter images? 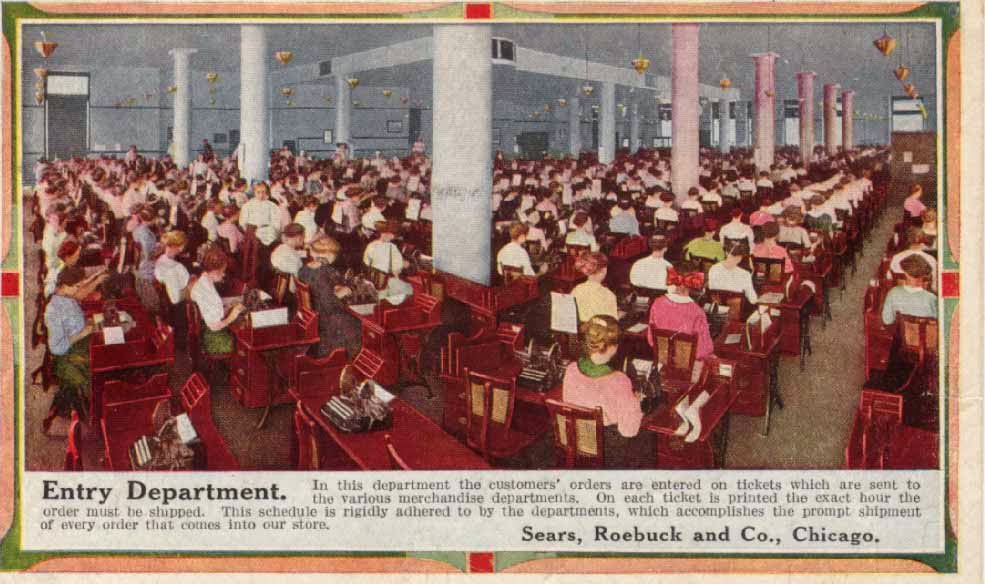 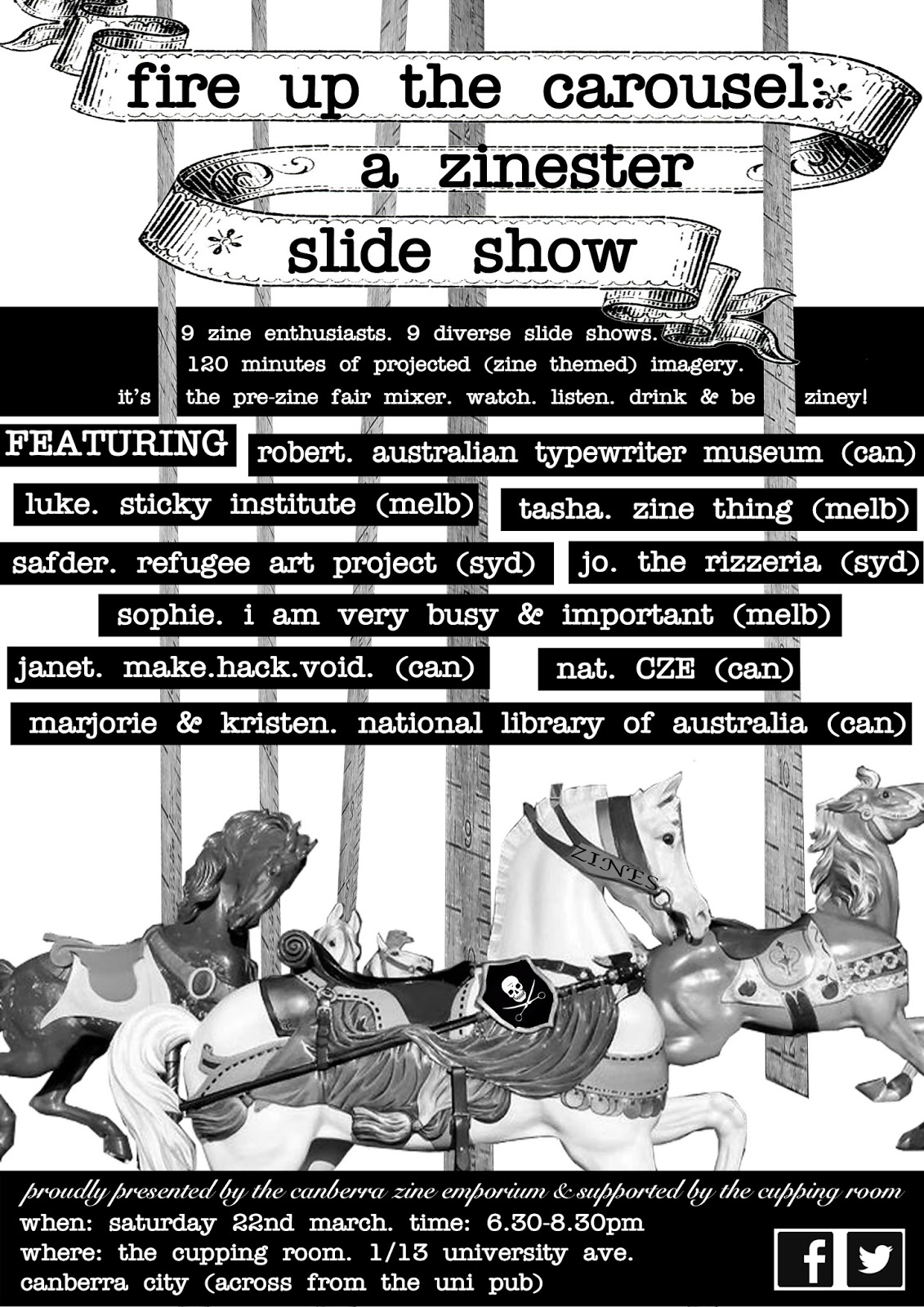 Posted by Robert Messenger at 23:13

I'm sure you have plenty of candidates, Robert. One of my favourites of yours is the image of Mary Elizabeth Coleman and Norah Gridley outside Abe Lincoln's log cabin. http://oztypewriter.blogspot.com/2014/01/the-hammond-typewriter-and-mystery-of.html

I would love to see your presentation. I know you have more than enough to interestingly present. I could understand a problem trying to limit to only 20 and 20 seconds though.