On This Day in Typewriter History: 'Hillardized' Underwood Typewriters - The Treatment from Archibald MacLeish's Uncle 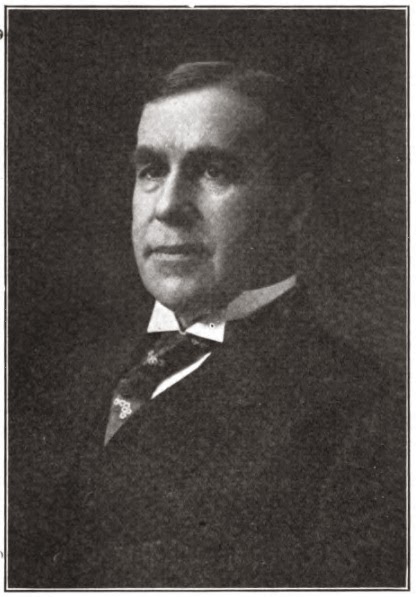 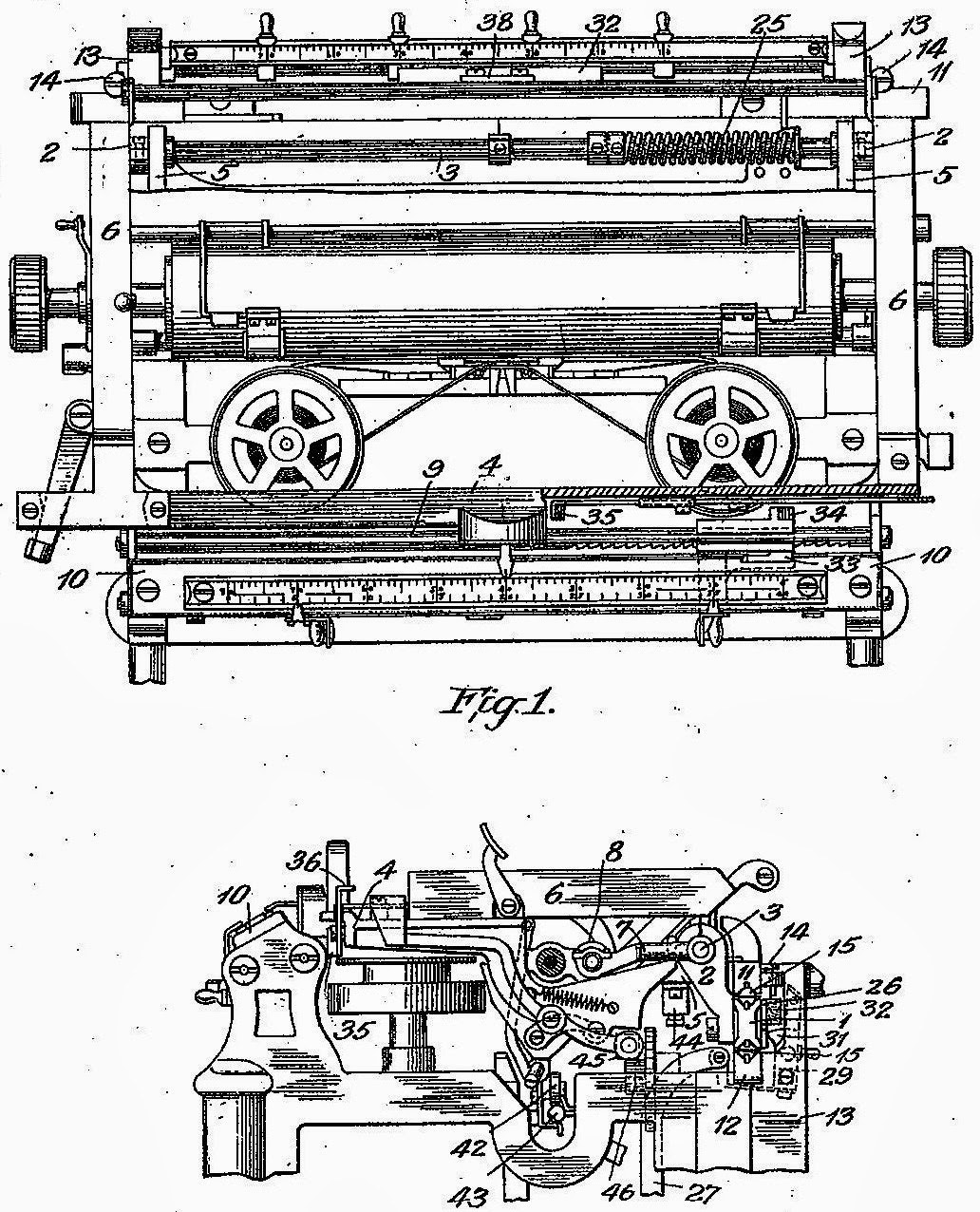 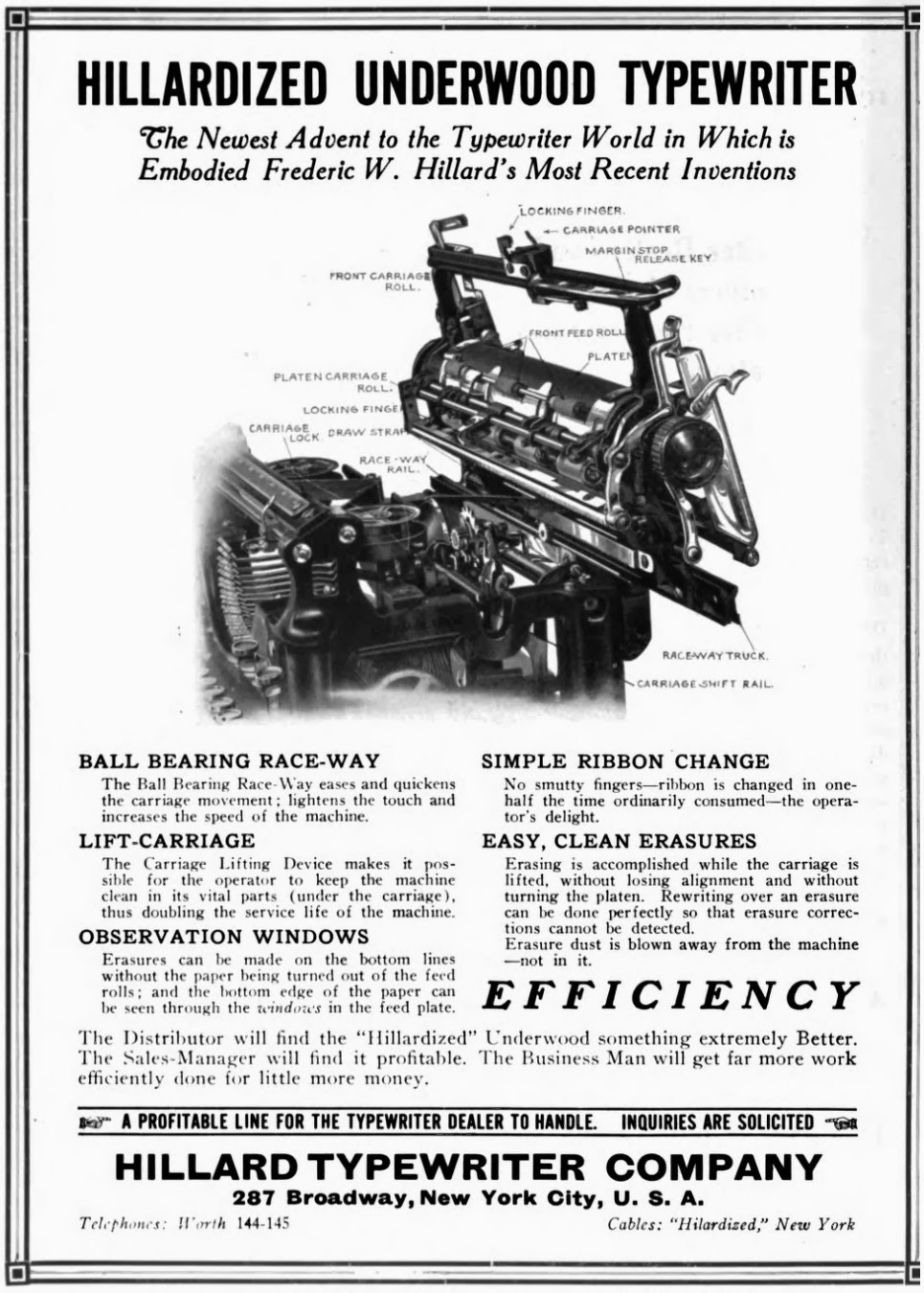 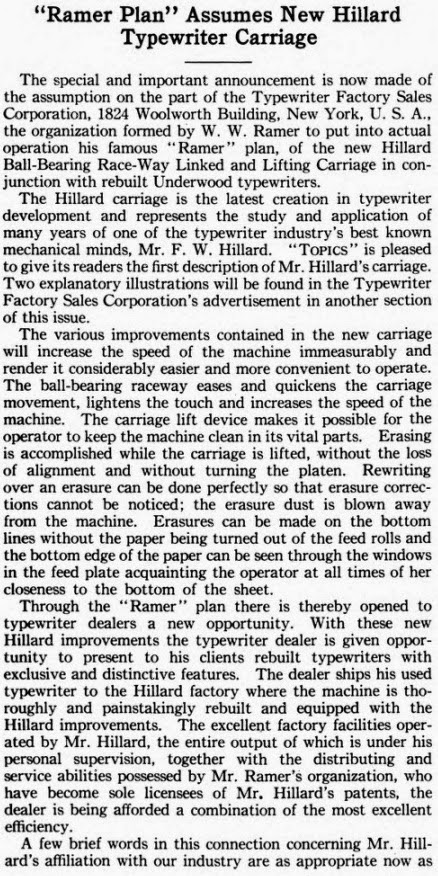 Hillard's Yale obituary shows he was an uncle of famous American poet, writer and the Librarian of Congress Archibald MacLeish*: 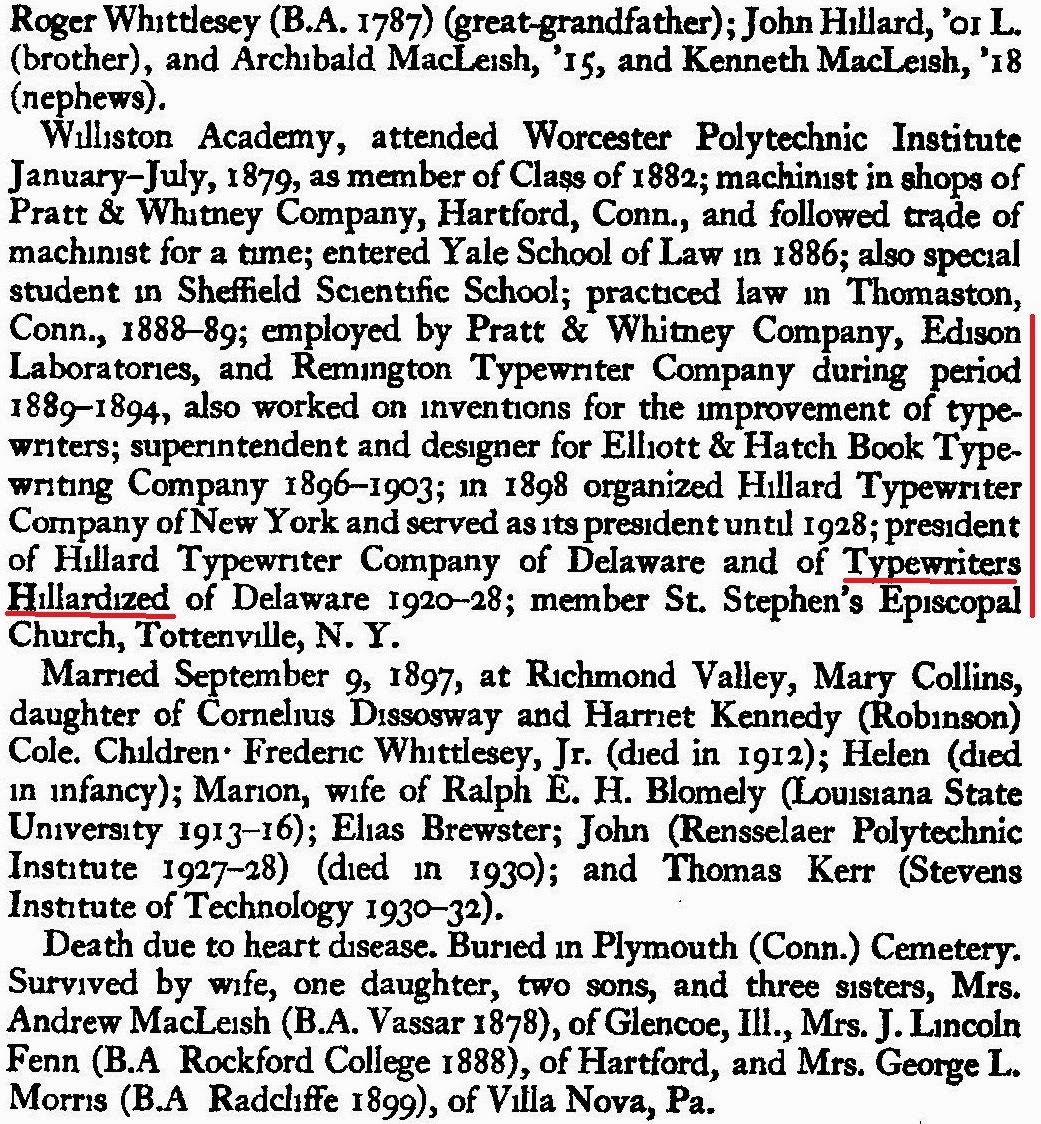 Hillard wrote of his invention that it was "an improvement in anti-friction or ball bearing supports for the carriage of a typewriter. The improvement is herein illustrated as applied to the well-known Underwood typewriter, for which instrument it was particularly designed, but this is illustrative only, as the invention has wide application and is not limited to any special form of machine, but applicable generally where the other features of construction and operation permit. The chief object of the invention is to secure an easy running and rapid feeding carriage in a visible typewriting machine and at the same time provide a carriage which may be readily swung upward that the parts of the mechanism thereunder may be readily inspected, repaired and cleaned. This swinging movement of the carriage also is an advantage in that the writing may be inspected practically to the last line on the sheet and the operator by so swinging the carriage can readily tell just how much space is left at the bottom of the sheet or card." 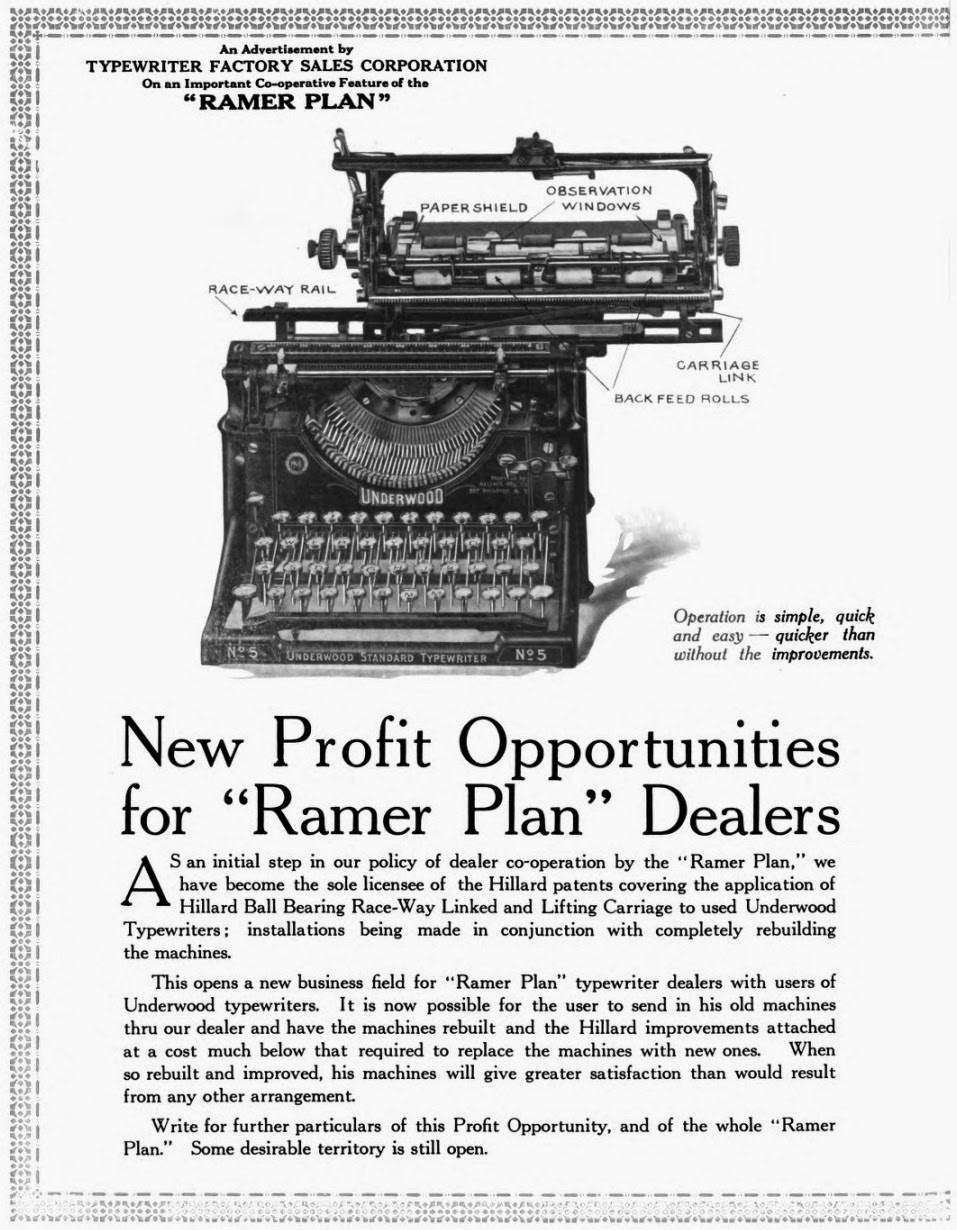 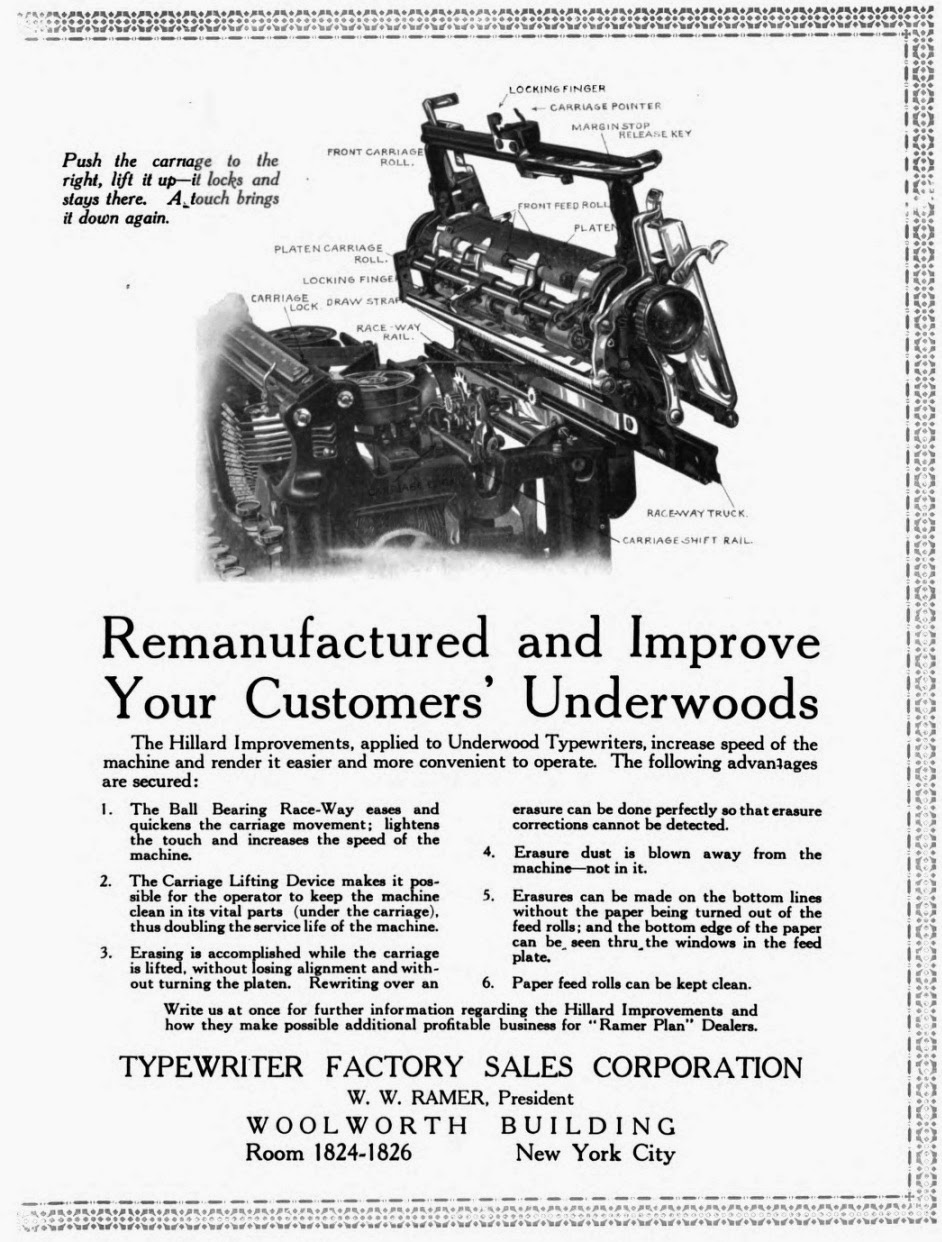 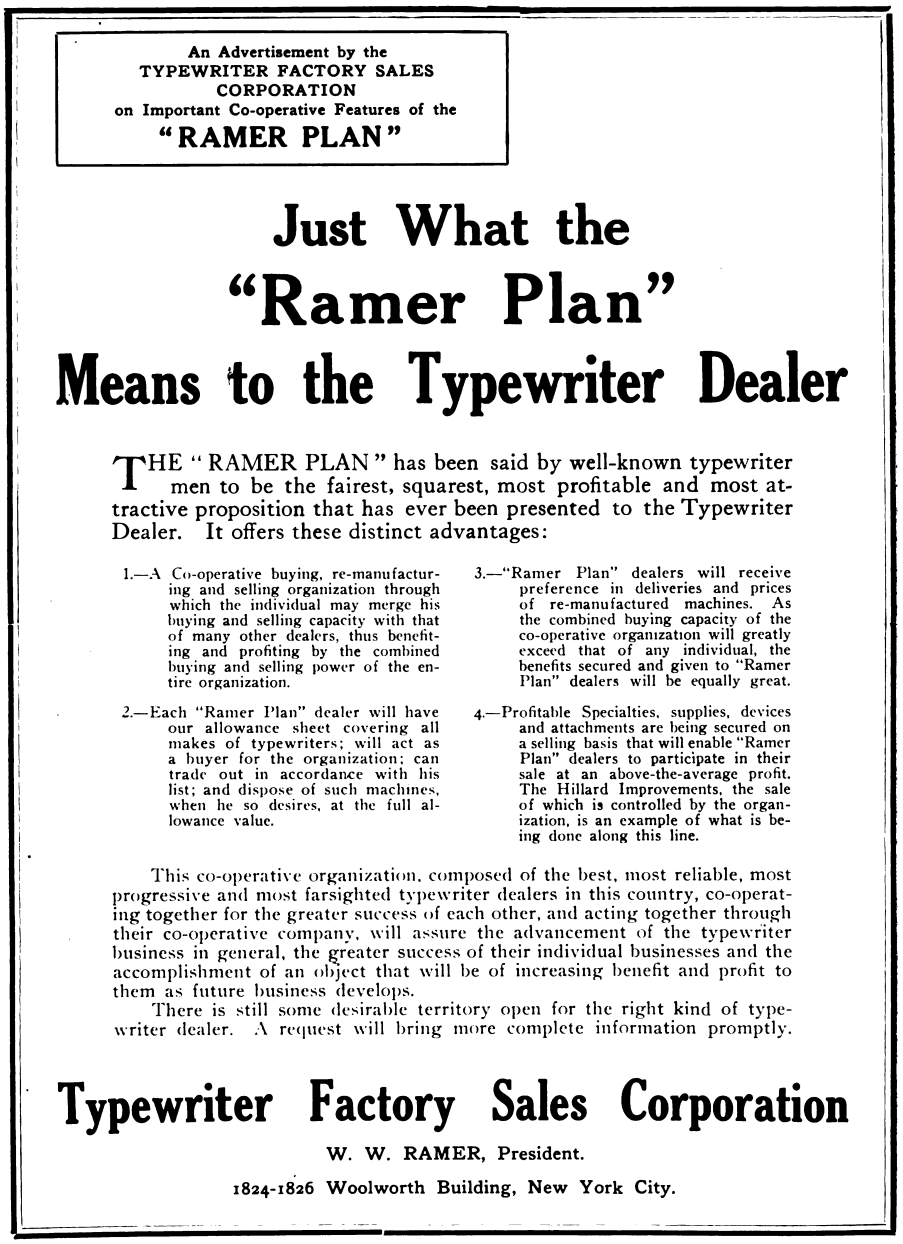 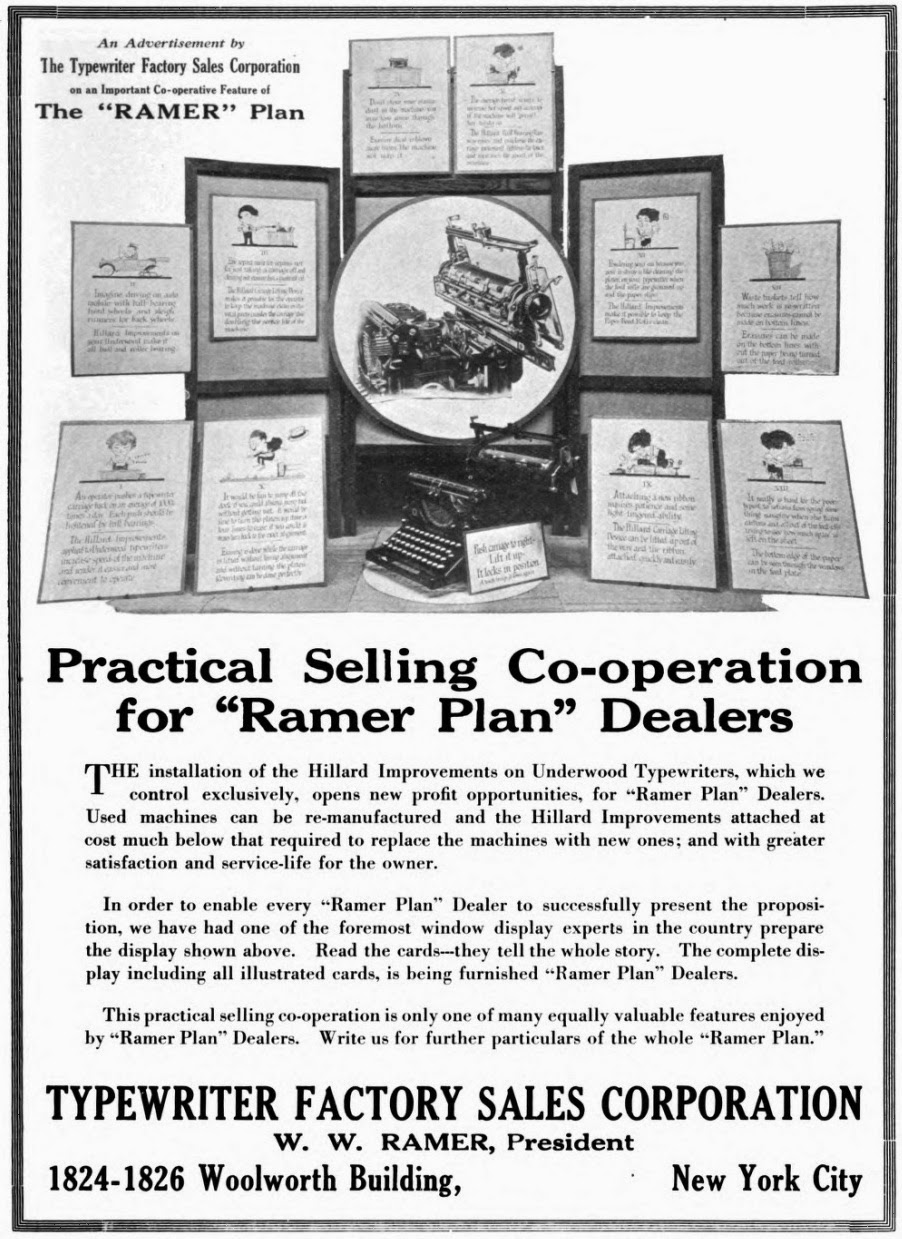 I covered much of Hillard's typewriter-inventing career in a post in this series in August 2011. In all he was issued with 29 typewriter-related patents during a 31–year period between 1897 and 1928. Hillard’s sister, Mary Robbins Hillard (below; 1862-1932), of Middlebury, Connecticut, to whom Frederic assigned three patents between 1915 and 1921, donated Frederic’s papers to the Connecticut Historical Society, where they are still held. Some 150 of his letters relating to his patents for typewriters and typewriters parts, covering 1902-1931, now rest in Hartford.

Typewriter history, however, has not been kind to Hillard, who is perhaps best remembered for a failure - a lost March 1911 court case: 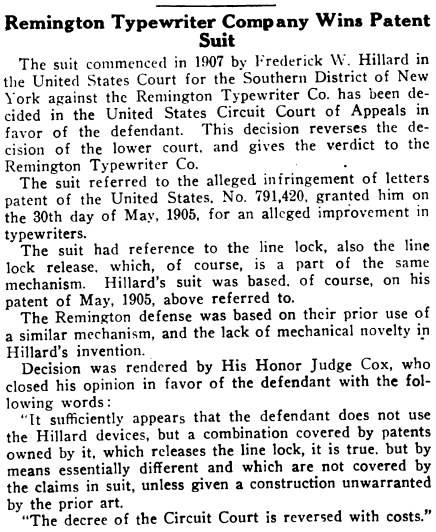 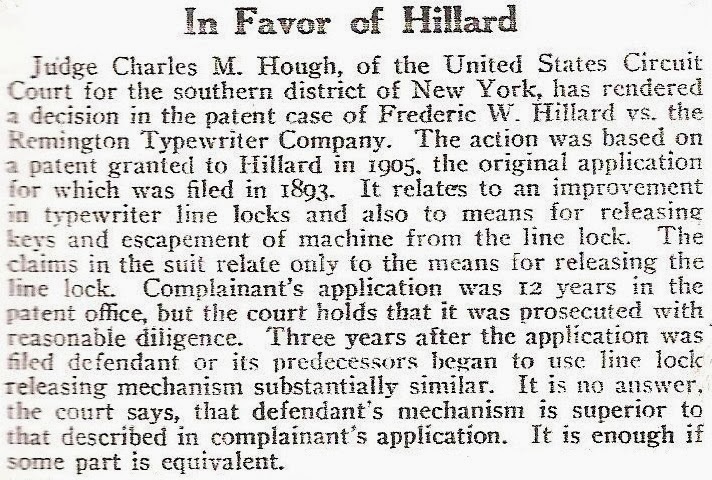 In 1908,  Hillard was also involved in a patent infringement case against the Fisher Book Typewriter Company in the Federal Supreme Court. Fisher issued a petition for a writ of certiorari to the United States Circuit Court of Appeals, which was denied. A writ of certiorari means an order by a higher court directing a lower court to send the record in a given case for review. This case ended Hillard’s association with the book typewriter. Twelve of Hillard’s 29 patents were related to the Elliott book typewriter. Hillard began working with Walter Platt Hatch in 1894 when the assignee was known as the Elliott and Hatch Book Typewriter Company. Hatch had jointly developed the book typewriter with George Crawford Elliott. Hillard continued to work on improvements for this machine when the assignee became known as the Elliott-Fisher Company. The change of company name occurred with Robert Joseph Fisher’s involvement in 1903. Later Underwood bought out the concern, so the machine became the Underwood-Elliott-Fisher.
After the "Hillardizing" exercise, Hillard went on in 1922 to develop "flexible paper fingers" for the Underwood, a troublesome venture which almost brought about Hillard's premature death. 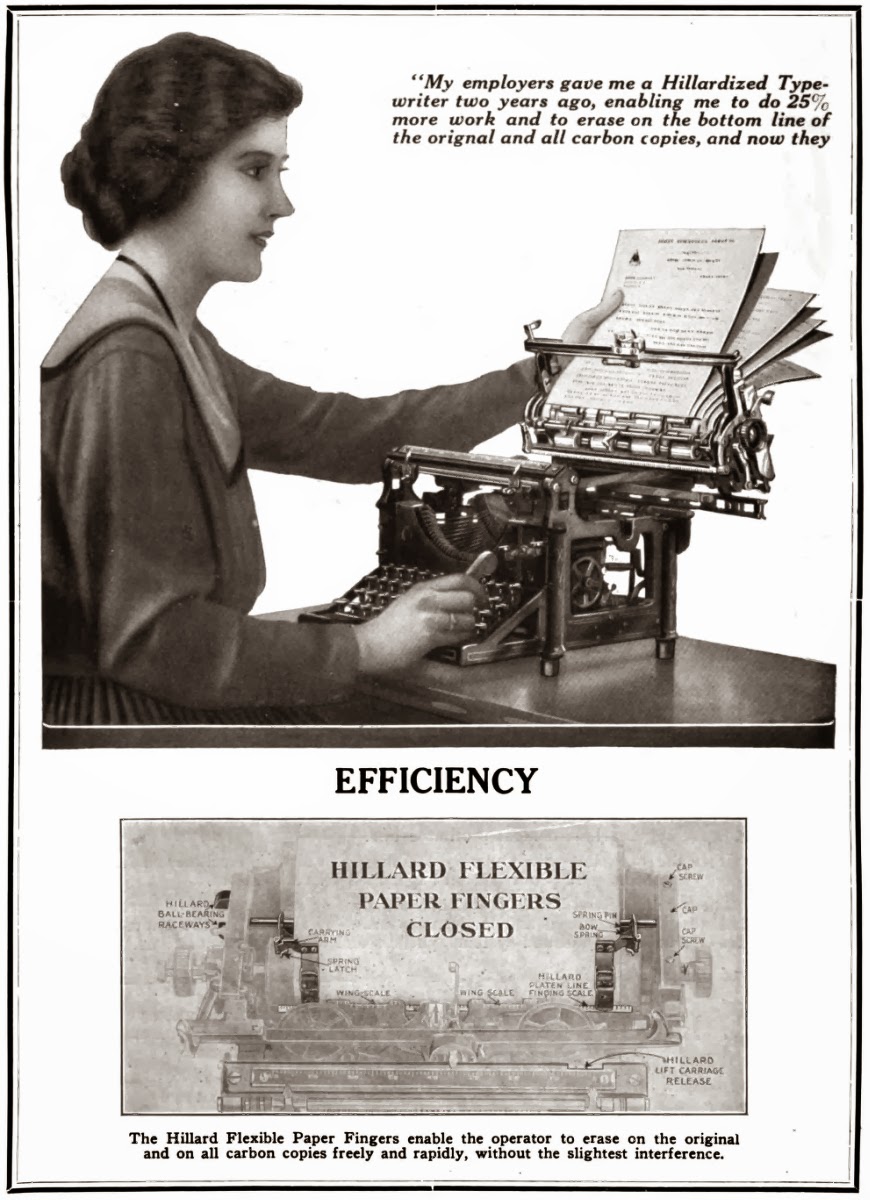 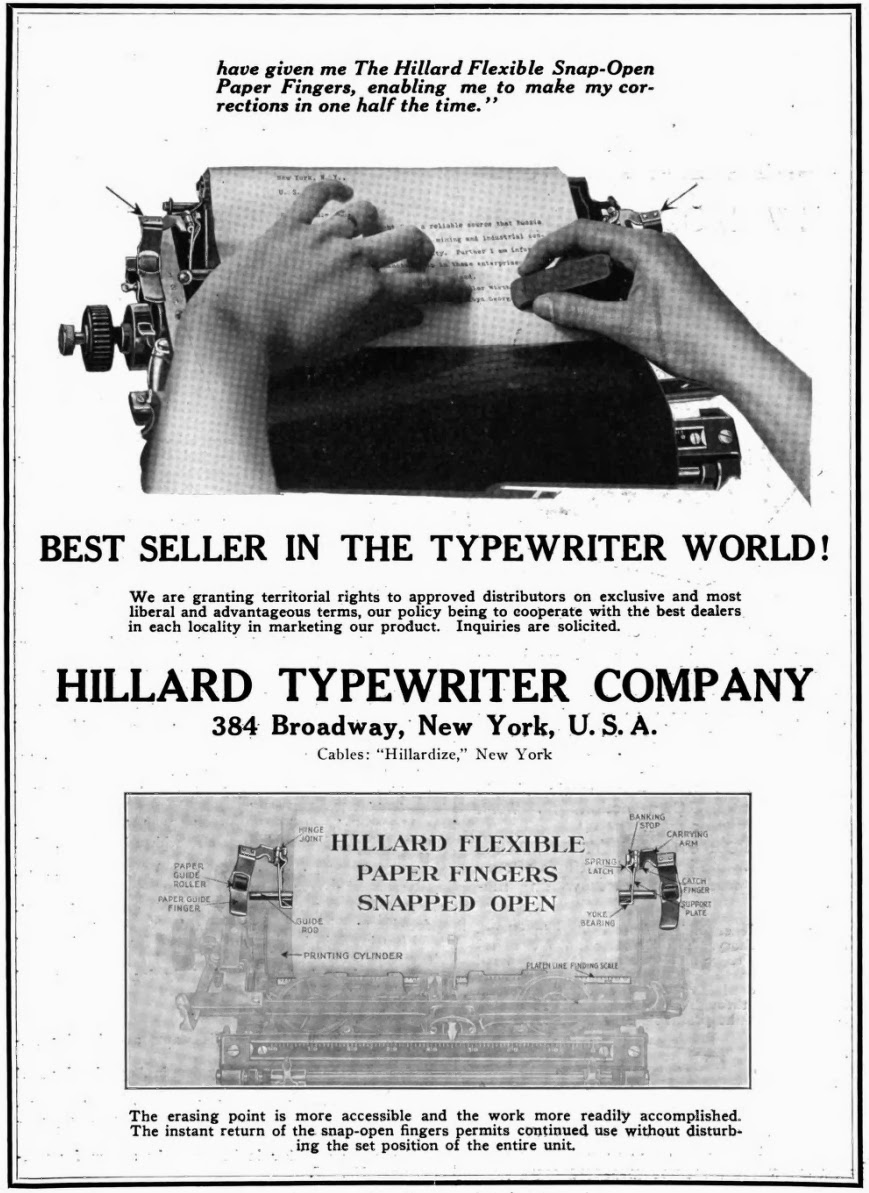 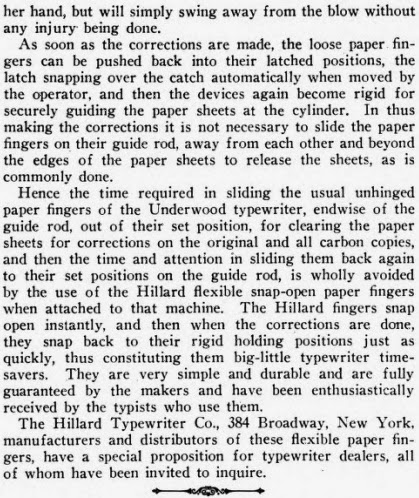 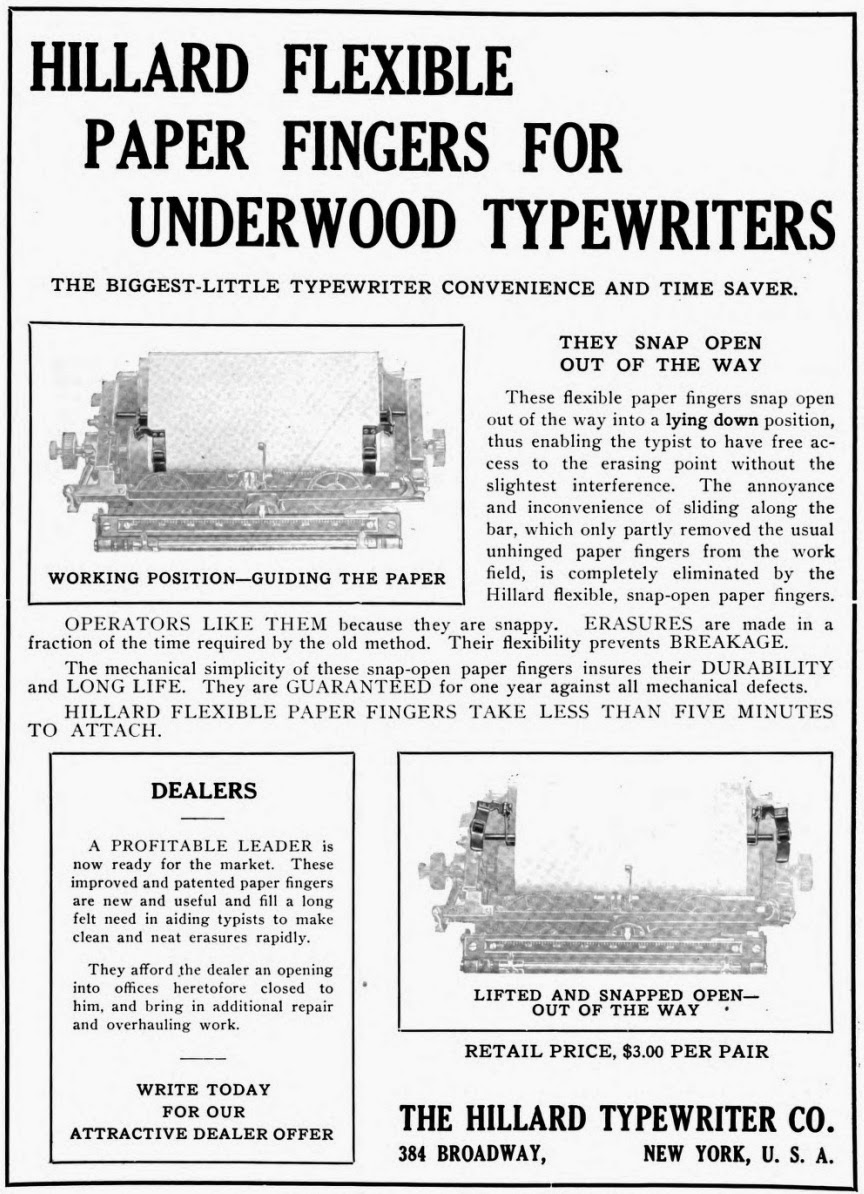 Here is an insight into Hillard's attitude on labour relations: 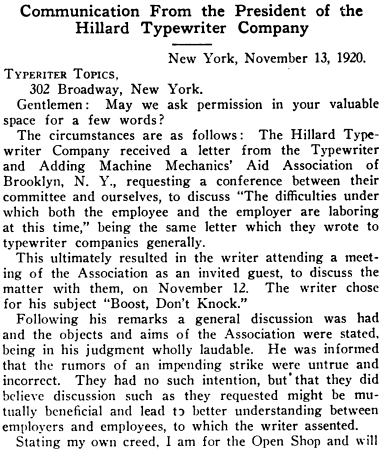 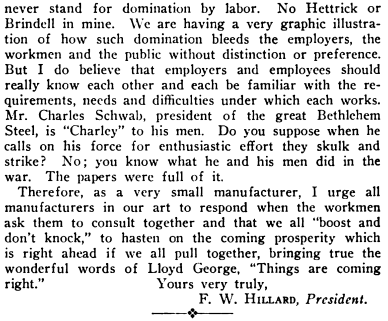 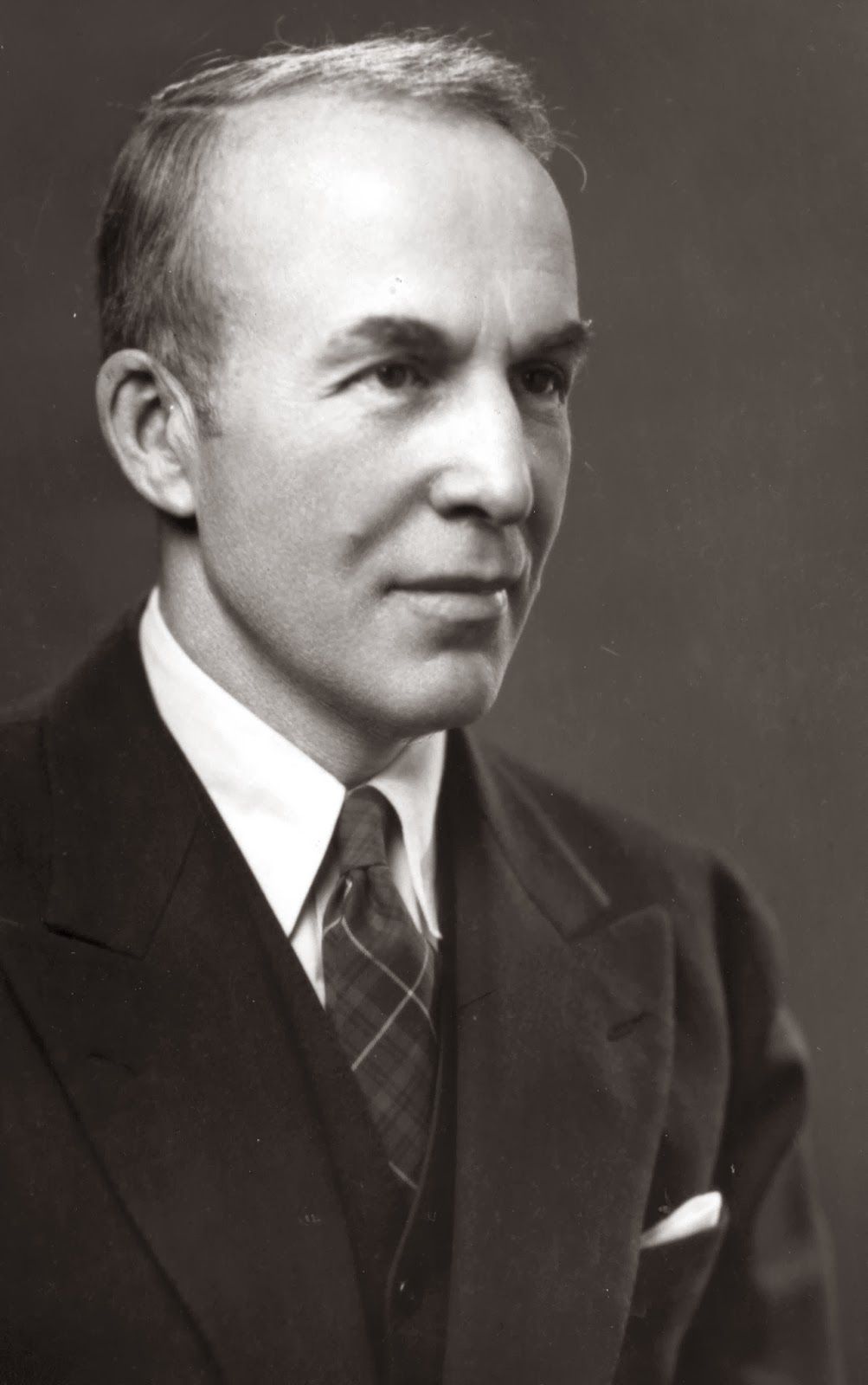 *Hillard's nephew, Archibald MacLeish (above, 1892-1982) was born in Glencoe, Illinois. His mother, Martha "Patty" MacLeish (1856-1947), Hillard's sister, was a Vassar garduate, college professor who served as president of Rockford College.
Posted by Robert Messenger at 18:48

I sure would like one of those on my Underwood. The only thing I do not like about my office size Underwood is the time it takes to change the ribbon because of the way Underwood hides it.

I guess I called the little lever I found on mine the correct name too. I see on the drawing it is called the margin release.

I wonder why Underwood used 2 of them. The one on the carriage and the button.