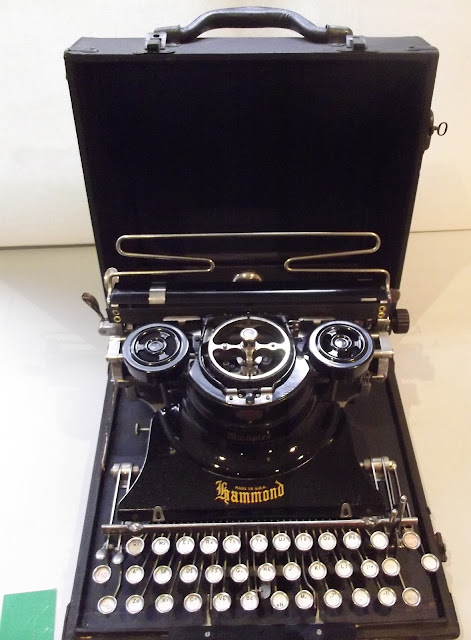 Typewriter collecting is just the bestest thing in the whole wide wide world!!!
The day started with me posting on the Olivetti Valentine, and deciding to take the green Valentine out of storage to feature on the post.
Straightaway my great mate Scott Kernaghan messaged from Brisbane: "And your green machine emerges from Aladdin's cave! It is Magnificent," wrote Scott.
Then my son Danny and I set about trying to pick a winner from the morning paper for this afternoon's Melbourne Cup - the greatest horse race in the world, bar none.
From seemingly nowhere Danny Boy plucked the name Green Moon. Never heard of it, I thought - but I then don't hear too many racehorse names anymore. But Green Moon ... has a nice ring to it.
Green Valentine. Scott's Green Machine message. Green Moon. Why not? I illogically reasoned.
So we went down to the TAB and I put $10 to win on Green Moon's broad nose.
No sooner had we got home than a delivery man arrived with the most fantastic Corona Streamliner - I think I might have at last found my Holy Typing Grail. It's an incredible typer. This thing REALLY rocks and rolls! I can hardly believe I've got such a brilliant writing machine.
After that I went to Bungendore and picked up a magnificent old Orel thrust-action typewriter, in beautiful working condition.
I came home and worked on the Orel for a while. Never heard of an Orel? Stay posted!
(And stay posted, too, for the Streamliner, my Holy Grail.)
Then the race started. I couldn't believe my eyes. From out of the lush green Flemington turf Green Moon burst to the front and bolted home, at 20-1. That's a $200 win for me, just quietly (and Danny won some, too).
Goodness, to see that horse later, in slow motion, powering to the line, it brought tears to my eyes. Magnificence in motion.
Could the day get any better?
Well, it most surely did!
I was looking around for a green typewriter to post on to mark this already unforgettable day when suddenly, out of the corner of my eye, I spotted a splash of green - and a new box.
Completely unbeknowns to me, while I was excitedly watching the horse race, another delivery man turned up and left a parcel at my front door.
It was wrapped in lots of GREEN tape.
I hurriedly unwrapped it and gently took out the case from the box and on top of it was a piece of GREEN tape holding a tiny key.
I found the lock on the side of the case, turned the key ...
I opened up the case ... and ...
W  O  W !!!
A Hammond Multiplex!!!
In immaculate condition!! 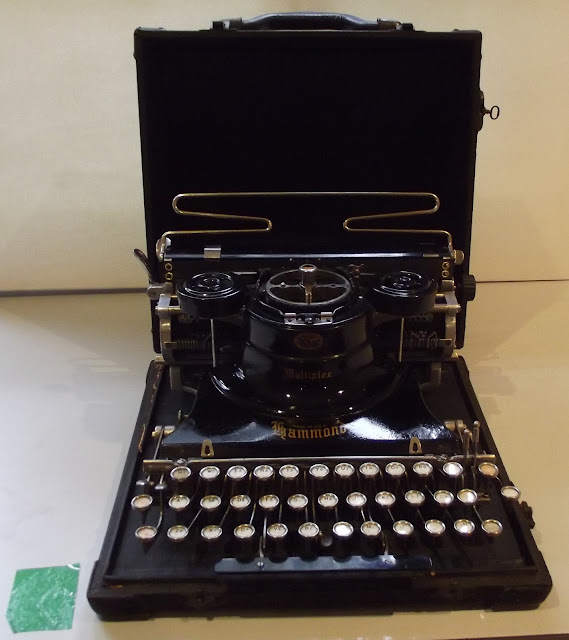 I was only writing about these a week or two ago, now I own one!
Gee, am I going to have some fun with this?!
As a result of watching the Melbourne Cup on TV, I learned there was a $100 million Lotto drawn tonight. (I'm pretty much out of touch  with the world these days.)
I'm now going straight down the road to get a ticket.
With this sort of luck ... Hey, anything could happen!
PS: Got the ticket. I'm still shaking with excitement! 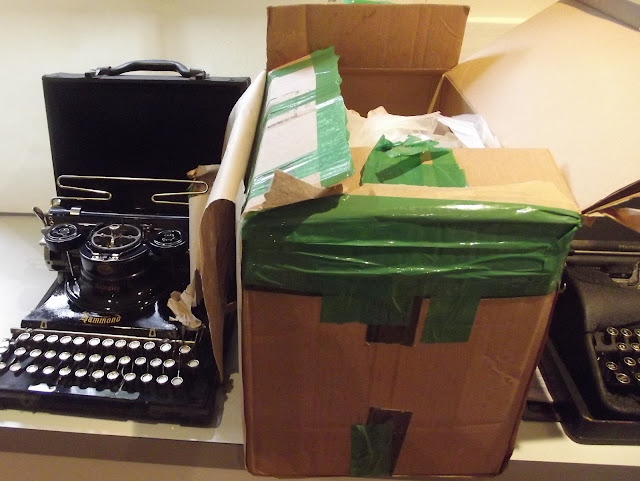 Posted by Robert Messenger at 16:28

Simply amazing! What an exhilarating post!!! Congratulations on all your "green" wins so far, and all the best with the lottery ticket!

That Hammond is just breathtaking - what a lovely shine it has, straight out of the box. Beautiful!

Congrats on an amazing day and good luck with the lotto! I'm really curious about the Corona Streamliner now.

Hi Adwoa: Thanks so much. Yes, that was the thing that struck me, it was like new, straight out of the box. The case wasn't all that new looking, but my goodness .. what was inside!
Hi Inkleaves. Just had another "play" with the Streamliner. First impressions weren't deceiving. It rocks and rolls and it types like it was Jerry Lee Lewis with a ribbon and keyboard. It may not be the flashest machine to look at, but by jingos it can type.

That's a fantastic day, a day that deep down we would all be a touch green with envy about(!)
And good luck with the lotto - if you win the 100 million that would really perfect the day, wouldn't it?

Do I see a Streamliner poking its head around the side of that box there? I believe I do! Whoooo.... This is a great day for you!

And how astonishingly beautiful is that Hammond. What an amazing machine you have there Robert!

A very amazing day! Congratulations on all of your new typewriters. That Hammond is stunning! I can't wait for your posts on the rest.

Good luck on the horses & Lottery. I hope you win.

Love to see a great day when it rains, it pours post. Can't wait to see the streamliner and feel free to take video of the Hammond.

We are an easily pleased bunch and I think you just added another Typewriter Day to the calendar. I can't remember if there's a Patron Saint, but Robert's Day has a ring to it. As if in some antipodean balancing act, my Mac G5 (OK, it isn't a typewriter but it IS my office and my tool kit ...and my main means of making a living) decided that today was a good day to die. Thankfully, they still make 'em!

Hope you win the lottery.