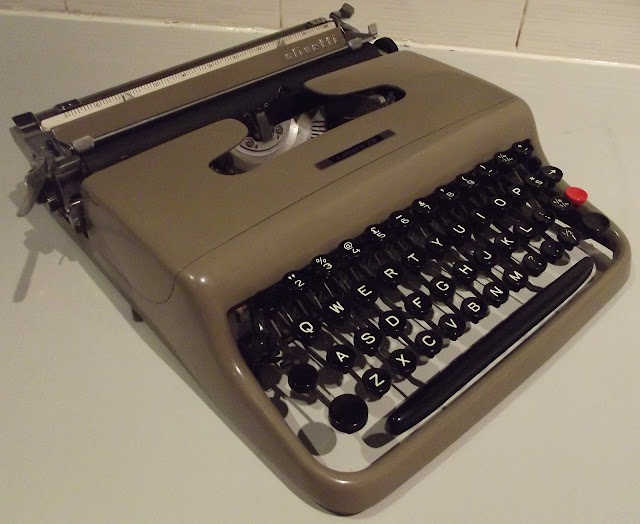 Having used one since 1965, I thought I was long, long past the stage at which anything on an Olivetti Lettera 22 Portable Typewriter could surprise me. But this one did this morning. Twice.
Fellow Canberran Ray Nickson had been mentioning his family's Lettera 22 for some time. But nothing he had said had prepared me for the surprises. Ray said the Lettera 22 had been used by the whole family, had had a lot of use over the years, and was showing the signs. I offered to have a look at it for him. So on a trip back to Adelaide, he picked it. This morning he brought it over. 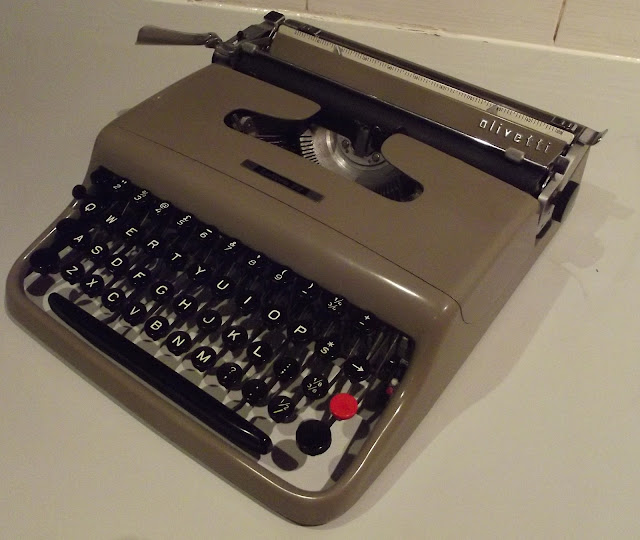 The case was the standard, very familiar fawn coloured zipper affair with the faux leather dark brown stripe down the middle. The zip, or the stitching which held it to the case, or both, had come apart. No surprises there.
Then I lifted the lid. Wow! Never seen one of these tartan dust covers before. Quite spectacular. The case did not have the standard tartan lining, instead this tartan dust cover, a much more stylish arrangement than the normal dust cover. Still, the machine was made in Glasgow. So, as attractive as the cover was, it wasn't all that surprising. 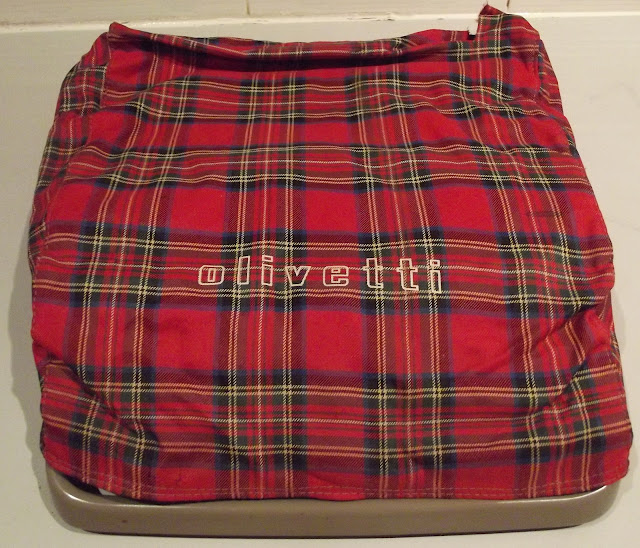 Then we lifted the dust cover ...
Well, well, well ... this I have NEVER seen before. 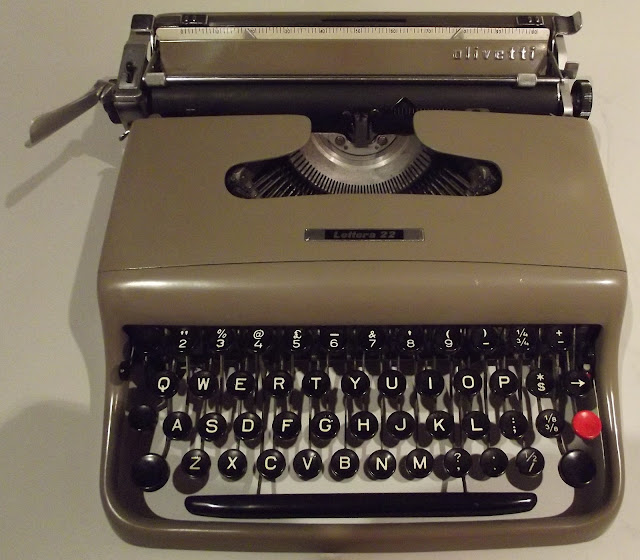 Have you spotted it yet? The difference? I did, straight away. The embossed silver brand name on the paper plate. The one that looks like the centred brand names on the ICO MP1 and the Studio 42 paper plates? 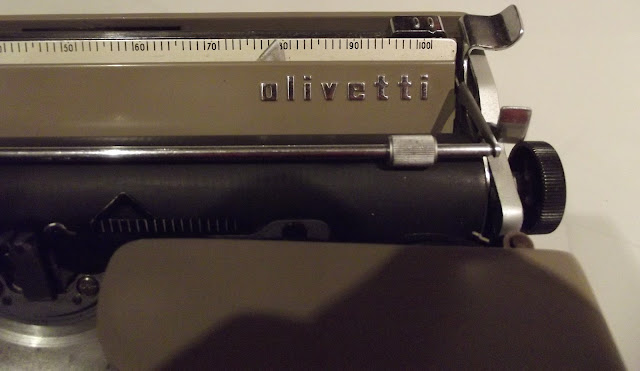 Yes, I can safely say this: I have been looking at Lettera 22s almost every day of my life for close to 47 years now, and I have never seen one like this. This is what I've only ever seen, until this morning:

It's obviously a very early model. The serial number is S623532, which means it pre-dates the 1954 start in the Typewriter Age Guide. According to the Typewriter Data Base, it could even be pre-1950. It would certainly seem likely that this was the style on the earliest Lettera 22s - and far, far more attractive than the common labelling, I might add. Anyone know more? 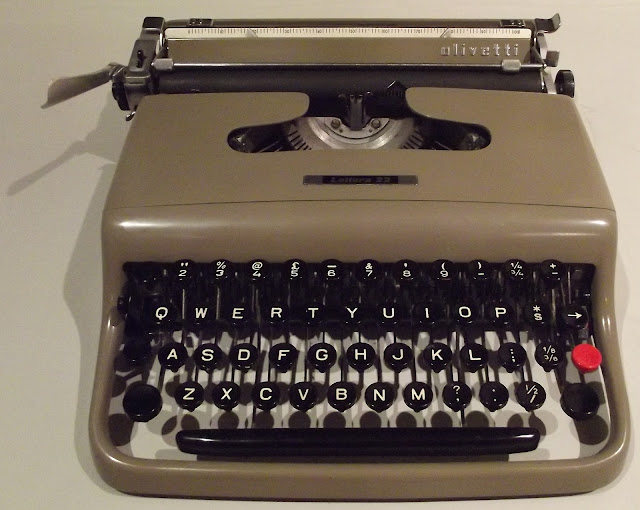 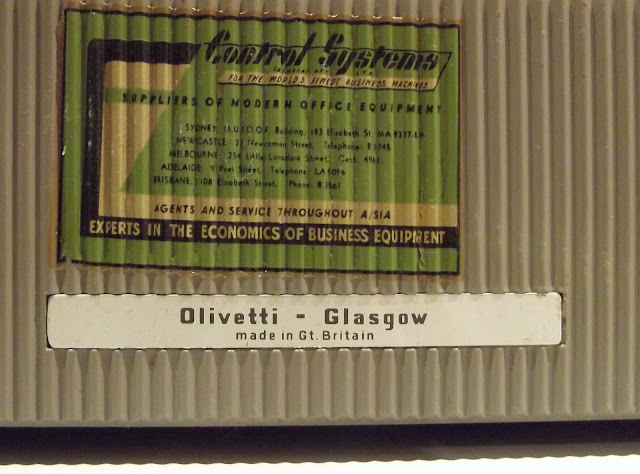 Posted by Robert Messenger at 23:17

At first glance I thought something odd about Olivetti on the paper table, but I am not too familiar with the Lettera 22 and passed it by.

I had to read your article to find out if the difference was in fact the olivetti.

I also never knew Olivetti had a factory in Scotland.

That embossed name looks especially nice. I also noticed that the key labelling seems larger than on usual Letteras - the letters are more bold and seem bigger.

I love the embossment!

Very atractive Olivetti logo. I've never seen one like that either.

Best to emboss - it will never fall off. Also, the most elegant way, according to my taste.

I certainly spotted that straight away. I've never seen one like that, ever! Very attractive.

As for the cover, that's also very interesting. And it just occurred to me that I could make such a thing, and get it printed in the same way. I have ideas! Wheels are turning...

Loving it! I really should get myself a L22 someday.

I, too, have never seen one like it. And I have been oogling Letteras of all kinds on the internet for some time now.
Are there any pictures, or promotional material, of the Lettera 22 from when it was first launched to be able to see if all the paper-tables of that time had the embossed "olivetti" on them, rather than the label?

Thank you Bill, Florian, Ray, Richard, Georg, Scott, Nat and Jasper for your comments. I am gathering a bit of info about this machine's history. I very much doubt it was originally sold in Australia, I suspect the sticker on the back is probably from a servicing.
Florian, I think you are right about the key labelling, I noticed that too.
Jasper, I will check old ads, I meant to do that in the first place.

Robert, an almost identical Lettera 22 just showed up on ricardo.ch: Link. It has the embossed name - but small key labels and was, according to the plate, made in Ivrea.

That is the coolest dealer sticker I have ever seen on a typewriter!

just acquired an early looking glasgow model - but am such a beginner i still haven't found the serial number.... where am i to find it?

thanks - found it with your help and a youtube vid: S715878 - where would that place it in the production run? it's a glasgow model

sorry about the repetition - clearly overexcited at my new toy

Thank You. Everything seems to work. Round keys. Appart from lack of original manual, the only thing mine is missing are the rubber washers for the four machine screws that attach the olive aluminium casing to the mechanism. might have fun trying to find a fair substitute. Suggestions?

well, i won'd go mad and try to track down original rubber parts... unless they are to be had: four new washers on their way

Since being bitten by the typewriter bug back in June '13 I acquired an Lettera 32 and quickly went after a'22, I was curious to learn more about these beauties and found that there where other typefaces available. These two had Elite typeface. Another L22 came up on eBay with an interesting difference, the decal on the front said it was a Scribe. The paperplate had the embossed Olivetti and the larger lettering on the keys, I won the auction and duly tried it out, it has a Pica typeface, tell me more! I dug up an old advert from a Country Life magazine dated 1951 with a full page about the Scribe and it informed me that the Scribe came with three typefaces, Elite, Pica and Bodoni. I missed a Bodoni Scribe on eBay but that's another story. The L22 was made in Glasgow, Scotland, I on the other hand I was made in Stewarton, 20 miles from Glasgow and yes, that definitely is another story! The Scribe was built at Ivrea , Italy. The Bodoni Scribe also had the larger lettering on the keys.

I have one of these. Sadly it is missing the center-front and rear badges, but it has that lovely embossed Olivetti logo.

Ours did not come with the spectacular dust cover, but we may just make one. :-)

Brian, I think I have spare badges, if you want them. If you do, let me know by email.

There's one for sale now: http://www.ebay.com/itm/VINTAGE-OLIVETTI-LETTERA-22-MANUAL-TYPEWRITTER-CASE-GLASGOW-GREAT-BRITAIN-/272005775176?hash=item3f54cebf48

I'm certain that the Olivetti Scribe model originally had the embossed OLIVETTI on the plate - the Scribe later became the Lettera 22. CJH Norfolk, England

Hello. I'm from Brazil and restoration typewriters and cash registers as a hobby on weekends. I had never seen one lettera with "olivetti" in relief. Most of what we have here were manufactured in Argentina or Mexico since the olivetti in Brazil only came into being after 1960, recently acquired a lettera 32 Mexican who is in bad shape. But within a month will be new. Very beautiful this typewriter.

I have serial number S622586 (so apparently less than a thousand units before yours), and it has the same embossed paper table. Unfortunately, it had been dropped and the case had acquired a pretty nasty break when it came to me - I bought it as a parts machine for the other Lettera 22 I already had. I'm debating whether to incorporate the paper table into my already-functioning L22, since I like the look so much, and one way or the other I will end up with one complete unit that's a mix of parts from two different L22s.

I just discovered one of my typewriters that has travelled with me from move to move, is this one. Serial number 911654, and it's 1950, produced in Ivera.

Was happy to find all the info on mine as it's very close to his collection:
Check out this link... looks like yours is older as Glasgow only produced to 1947?

They are beauties. Mine also has the leather brown striped case that he has. Gonna get it cleaned up, luckily it works well.

I appreciate that this is an old thread so not sure if this comment will get picked up. Over forty Lettera 22s have passed through my hands in the last two years, all but three Glasgow made. I wasn’t aware of the Typewriter Age Guide but from what I’ve seen from my own research I would support the assertion that Glasgow production started in 1954. Firstly, the spread of serial numbers (from 1954) and my discovery of a 1954 example which looks like a pre-production model, with small variations (no carriage lock, plain paper table - no indentation and no brand logo). My theory on the 22 above is that it’s an Italian one, refurbished in Glasgow and given a new body??