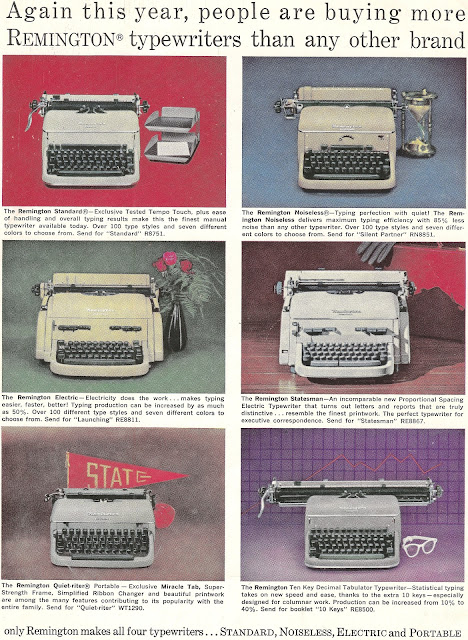 I was attracted to the item because of the large colour back page ad for Remington Rand typewriters. I just like putting as many different typewriter ads out there for the benefit of fellow Typospherians as I can.
But then I noticed the cover featured a US Navy ship named after my home city, Canberra. I hadn't previously known such a thing existed. It turns out to be an interesting story - Cuban missile crisis and all that. 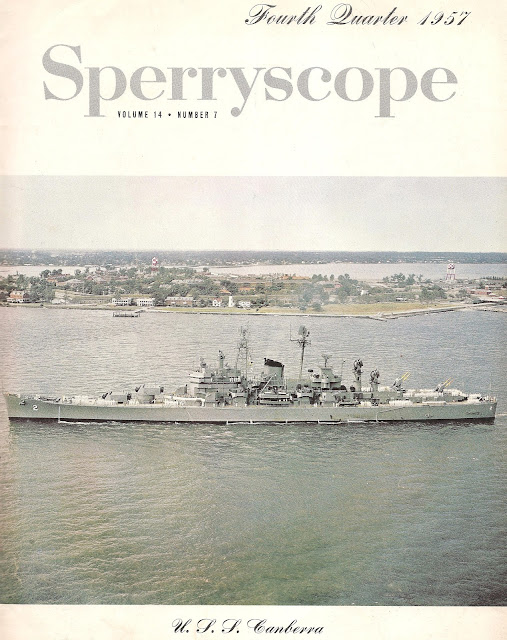 Anyway, it's a Sperry Rand Corporation journal from 1957.
And I got it posted to me - from France! Such are the wonders of this shrinking world.
Here's the story about the USS Canberra:


The ship was named for the Australian cruiser HMAS Canberra, was nicknamed "Can-Do Kangaroo", was launched in 1943  and finally decommissioned in 1970.
It was a Baltimore-class cruiser and later a Boston- class guided-missile cruiser. Originally to be named USS Pittsburgh, the ship was renamed Canberra before launch, after the HMAS Canberra had been sunk during the Battle of Savo Island. US President Franklin D. Roosevelt wanted to commemorate the Australian ship's loss by naming a US ship in her honour. It is the only USN warship named for a foreign warship or a foreign capital city. 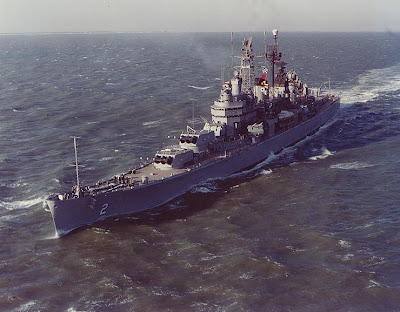 The ship served in the Pacific theatre of World War II. After the war, Canberra was selected for conversion into the second guided-missile carrying warship in the USN fleet. She took part in the Cuban missile crisis naval blockade in 1962, and was deployed to the Vietnam War five times between 1965-69, while home based in San Diego.
Despite US law preventing the possession of naval artifacts by other nations, a successful campaign enabled the ship's bell to be presented to Australian Prime Minister John Howard by US President George W. Bush in 2001, as commemoration for the 50 years of the ANZUS treaty. The 250-pound bell is on display in the US Gallery of the Australian National Maritime Museum in Sydney. 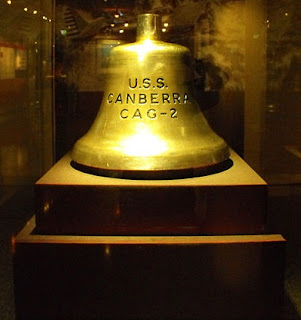 Posted by Robert Messenger at 22:02

The picture of the Remington Statesman in that 1957 ad is intriguing. I have never found this machine for sale or in anyone's collection; it must have been a complete failure as a rival to the IBM Executive.

Thanks Richard. The only one I think I've seen in this country is the Quiet-Riter, which, as you might recall, I once re-labelled a "Quiet-Writer". The Standard looks a bit familiar - is that the "Superman" machine?