On This Day in Typewriter History: The Bizarre Lasar 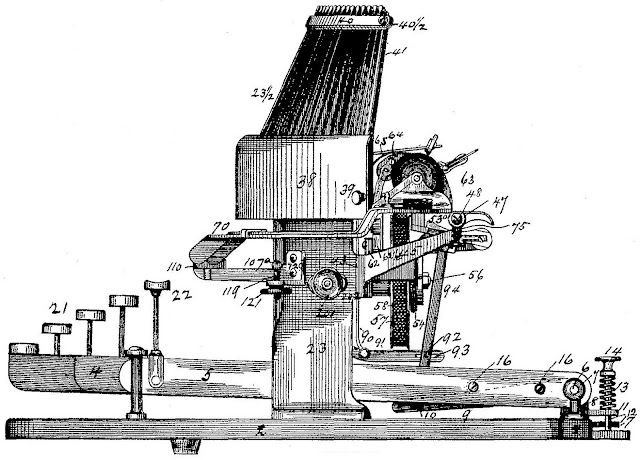 Here’s one for the Guinness Book of World Records: Who, with 17, holds the record for the greatest number of typewriter patents granted on just one day?
Answer: Godfrey Henry Lasar
Or should that be Gottfried Heinrich Lasar? Or Godefrey Lasar? Or Godfrey Lasare. Or Lazar?
Depends on where one looks and what one finds.
Believe it or believe it not, Godfrey Lasar’s large but tight-knit family took part in the 1880 United States census twice – giving different names and occupations.
But all at the same address; 908 Autumn Street, St Louis.
On June 3, 1880, they gave the census enumerator Charles Roth their Germanic names: Gottfried (modelmaker), Ernst etc.
On November 11 that same year, they gave census enumerator Alex Philippi their Anglicised names: Godfrey (now a machinist), Ernest etc, plus another daughter who had turned up, Nattie, but who was at school.
Twenty years earlier, when the family was living in Rose, Ohio, they told assistant marshal Finley Lappin their surname was Lasare. (There’s also a reference somewhere to the surname being Lazar, and to Godfrey’s name being Godefrey.) 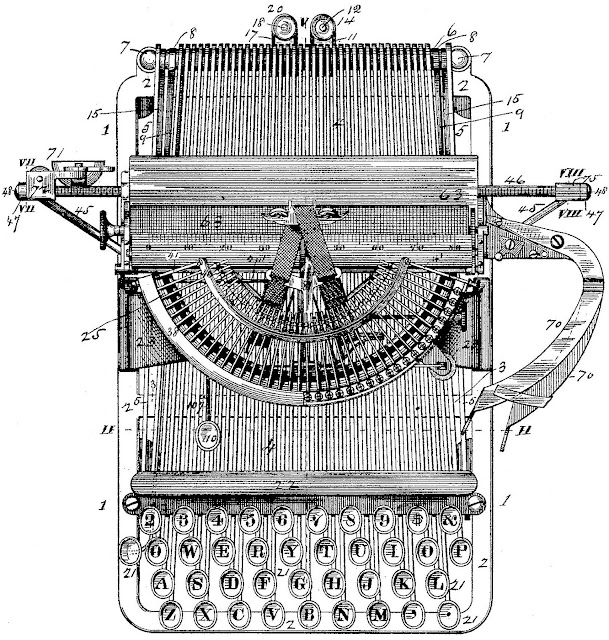 Lasar's final design (although the manufactured machine
apparently still showed some changes)
What we do know for sure is that Godfrey Henry Lasar was born in Canton, Ohio, on March 20, 1851. It says so on his death certificate. But, then, it also says there that his father was “Unknown”. In fact, his father was Hamburg-born Henry S.Lasar, an attorney, US commercial agent and consul and alleged friend of Ulysses S.Grant (Henry did serve for the Union Army in Missouri during the Civil War). 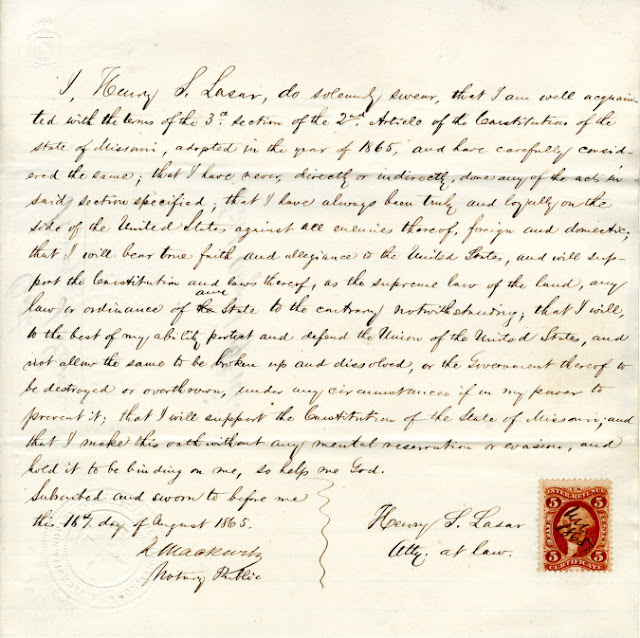 Henry S.Lasar's 1865 Missouri oath of loyalty
But so good a friend of people in high places was Henry Lasar, that under Rutherford B.Hayes’ presidency, he was sent as US commercial agent and consul to two of the furthest flung places on the globe: first in Lauthala in Fiji from 1879-80 and then to the other climatic extreme, Port Stanley in the Falklands for 12 miserable. Godforsaken years, 1881-93. Somebody must have really liked him in Washington.

While Henry Lasar was away from home, son Godfrey caught the inventing bug. On Godfrey’s death certificate, his ”usual occupation”, at the age of 89, was given as an “inventive engineer”.  He was far, far more inveterate than actually productively inventive.
For one thing, he wasn’t always original. While his attorney father was absent in the South Atlantic, keeping on eye on Antarctica, Godfrey gave up his steady work as a optician and started his patenting bent, with a tailor’s measure, a plug tobacco tagging machine and a barb-wire machine. Then he became fixated with typewriters, but immediately began to step on some toes.
Godfrey took out a patent in 1886 for a typewriter keyboard locking device. He finished up before a US Circuit Court of Appeals judge over it. 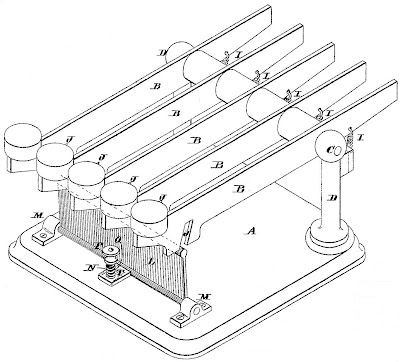 Godfrey was also in trouble with the state courts of appeals over a typewriter which had been designed in 1883 by a fellow St Louisan, George Washington Baldrige, one which employed two inking pads and looked suspiciously like Lasar’s first attempt in 1885. In the end Lasar had to assign his escapement patent to Baldrige, go back to the drawing board and adopt a ribbon mechanism.
Both of these cases were later used as precedents, in mid-1896 in an arm wrestle between Byron Alden Brooks and the Williams Typewriter Company (also involving the Knight Brothers), and in 1914 in a case involving the National Cash Register Company.
All very weird? Well not half as weird as the typewriter that Godfrey Henry Lasar, after no fewer than 22 patent applications over 2½ years, eventually arrived at. Those 22, by the way, included the case, the design for which Lasar was granted a patent on July 17, 1888. 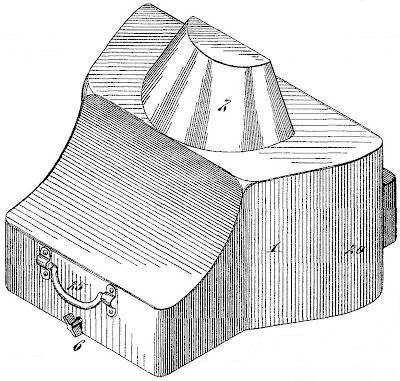 Lasar's typewriter case was many years later referenced by the great
Eliot Noyes in a Noyes design for an IBM typewriter case
Then 17 were issued on this one day (November 19) in 1889. They included almost every detail of the Lasar typewriter – hell’s bells, right down to one for the bell! 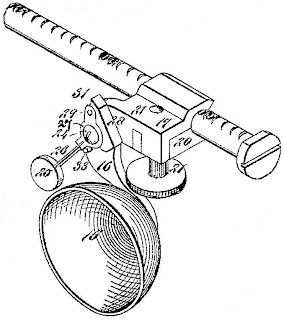 Two more patents followed over the next two years, making a grand total of 20 for the one machine. The US Patent Office and Lasar’s patent attorneys, the Knight Brothers, must have been having field days with this little lot.
There’s every reason to believe that Lasar was granted more patents for this one typewriter than there were Lasar typewriters made! Wouldn’t surprise me. 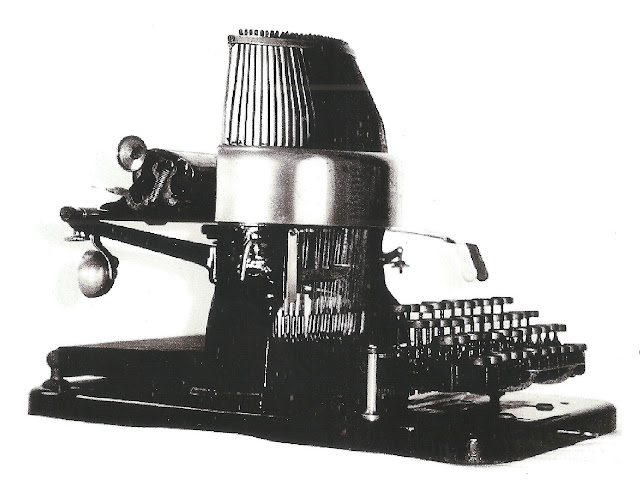 Tony Casillo's Lasar as it appeared in ETCetera
Indeed, as far as I’m aware, the only known owner of one is noted typewriter collector and historian Anthony Casillo – and his is No 21!
Tony wrote about his in the March 1996 edition of ETCetera (No 34). This, I believe, is the same Lasar which appears in Darryl Rehr’s 1997 book Antique Typewriters (below). 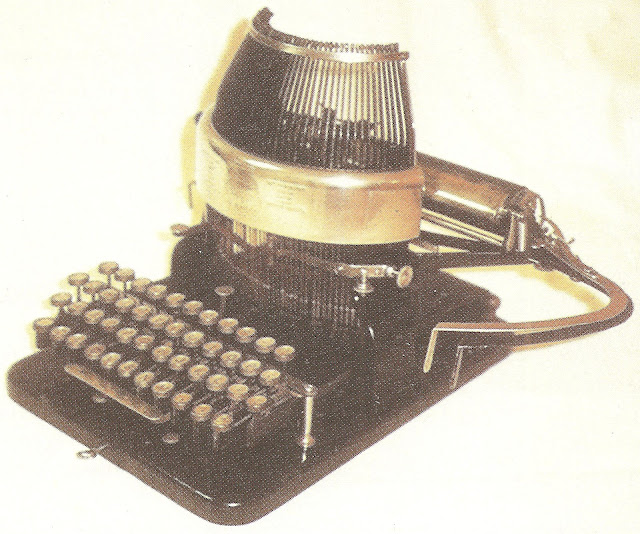 Michael Adler in his 1997 version of Antique Typewriters described Lasar’s machine as “large and heavy ... of downstroke design similiar to the Horton”. Adler said the Lasar was “reported to have been manufactured in considerable numbers around 1898 and 1900, although others report that only a few experimental examples were made”.
Lasar quickly gave up on typewriters in the early 1890s and devoted his attention to a band cutter and feeder and sash lock. He also went to work as a draughtsman for a patent attorney, possibly to pay off the Knight Brothers for his 17 patents on one day!
Lasar died in St Louis on April 1, 1940. 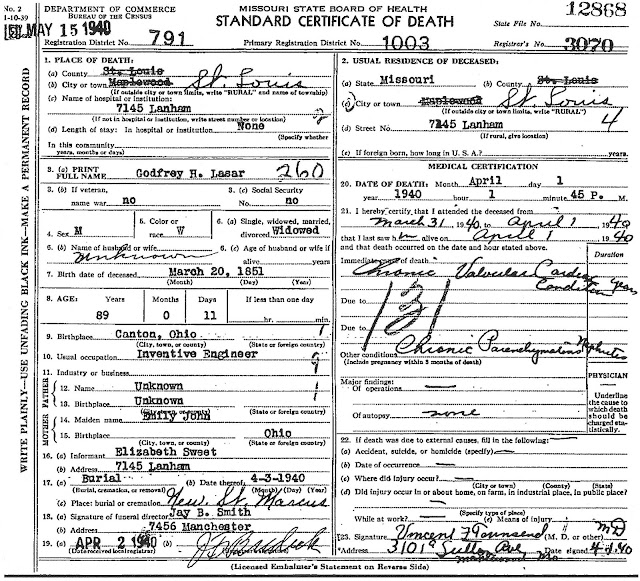 The Elizabeth (or "Lizzie") Sweet mentioned here as the informant of Lasar's death lived with and looked after the widowed Lasar for more than 40 years - first he and his two young daughters, Genevieve and Lovella, from 1900, and then Lasar alone after his daughters left home. 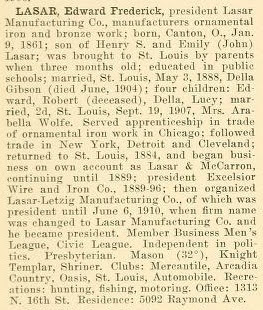 Fine research! I have had the pleasure of seeing the one and so far only Lasar in person when I visited Tony Casillo a little while back. I will point him to your blog.

I did not find the Lasar ugly -- the shape may be ungainly but it's a very nicely made machine.