On This Day in Typewriter History: Royal’s HH - 'The Greatest New Typewriter of All Time' 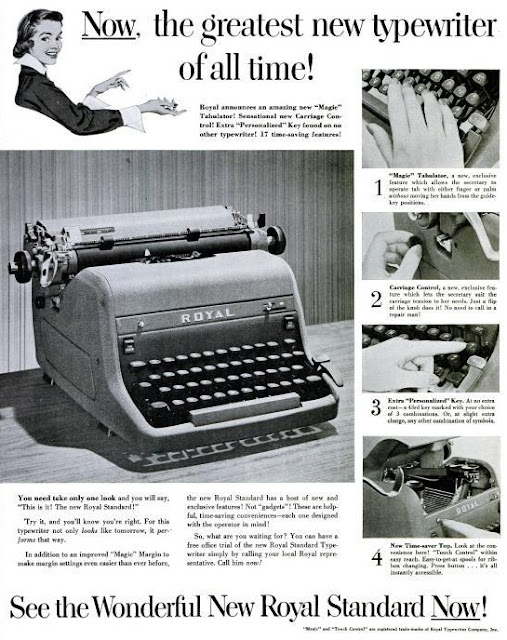 PART 167
The claim made by Royal about its HH line when it was introduced in 1952 was not just grammatically wild but extravagant to say the least. But I know of one Typospherian who might be inclined to vouch for it. Ryan Adney at Magic Margin has said, “The affinity I have for the Royal HH borders on lunacy. Thankfully, I only have the one, but given the option I would take another in one of the other five colours out there...” 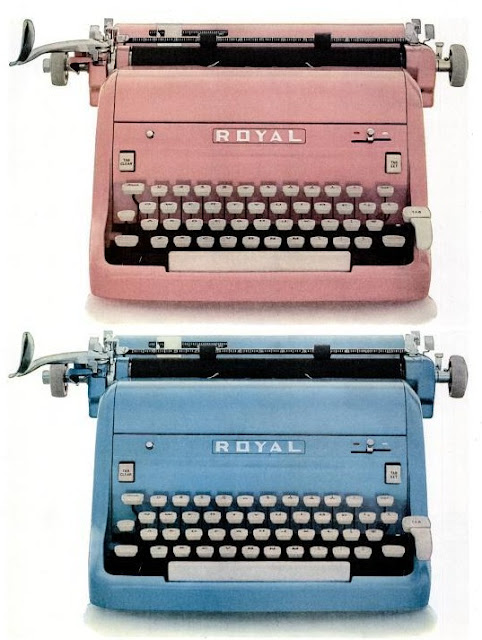 Incoming ETCetera editor Alan Seaver has also sung the praises of his HH. On his Machines of Loving Grace website, Alan wrote, “As an example of how well Royal built their typewriters, I found this covered with mildew and with its typebasket, key levers and inner workings inundated with dirt, leaves, bits of fur and feathers, dead insects, cobwebs and even a couple of acorns. All I did was blow out the junk, brush it off and wipe it down and it worked perfectly. Not a single drop of lubricant was needed.” 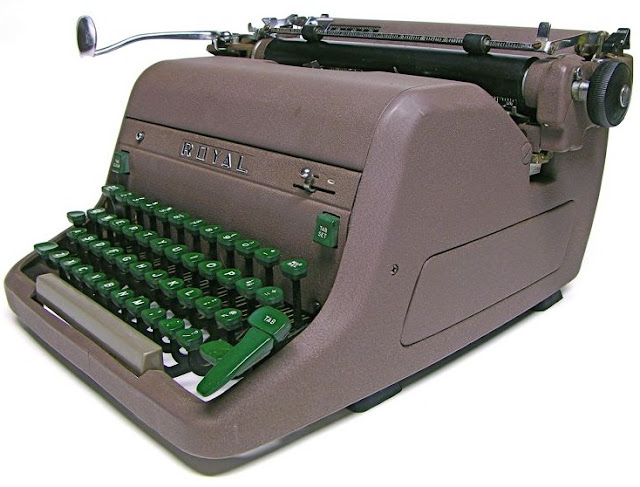 Alan Seaver Collection
The HH was introduced to the market at a time when, with mounting labour costs in the US, the major typewriter manufacturers were beginning a fight for their survival. As a separate entity, Underwood would not see the next decade. By the start of the 60s, Royal, Remington and Smith-Corona had started the process of moving much of their manufacturing off-shore. Yet in 1951-52, these companies remained fully committed to high-qualify design, engineering and materials – even if that pushed the price of the typewriter even higher than labour already had. 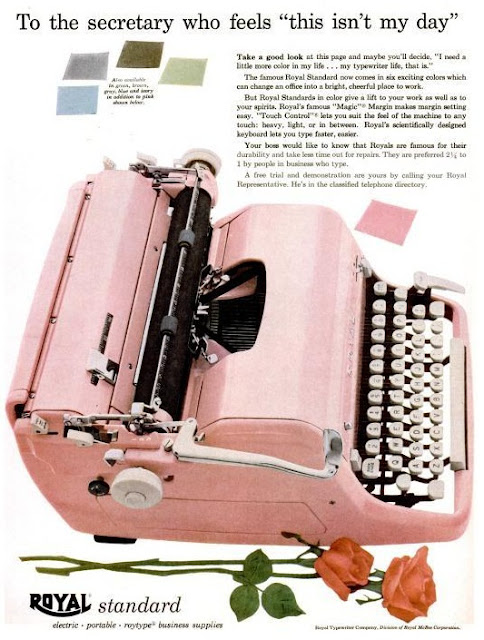 It was a gamble, really: would buyers pay rising prices simply because they remained confident in the quality of the product? The gamble didn’t come off, and something had to give. US typewriter manufacturing was the loser. 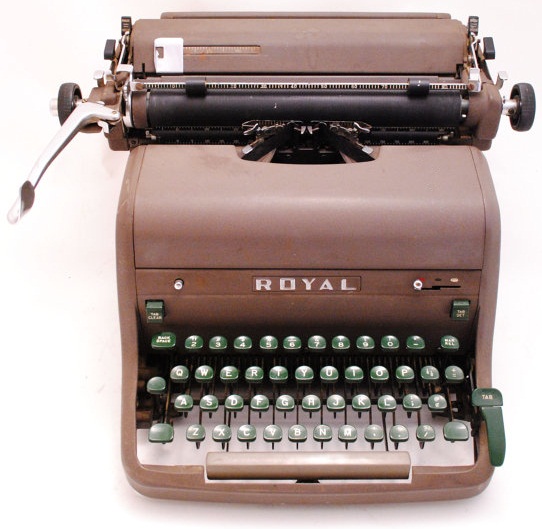 The two machines we will look at today, the Royal HH and the big Underwood electric, with the heavy promotion that accompanied their introductions to the market, clearly show that Royal and Underwood were acutely conscious of the challenges ahead. 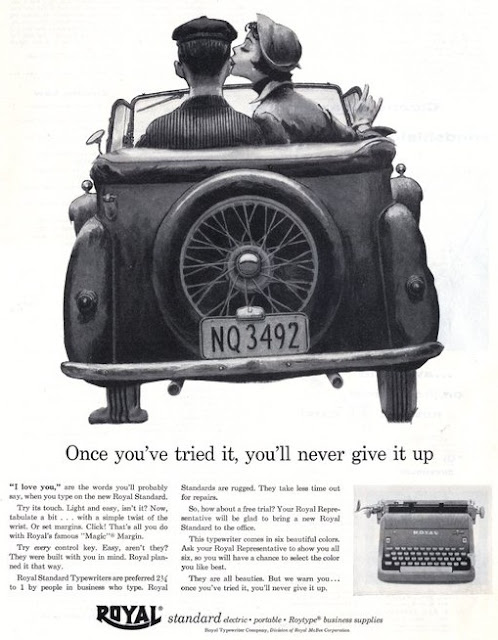 These new machines, along with the Smith-Coronas of the early to mid-50s, had to succeed for the sake of the US industry. 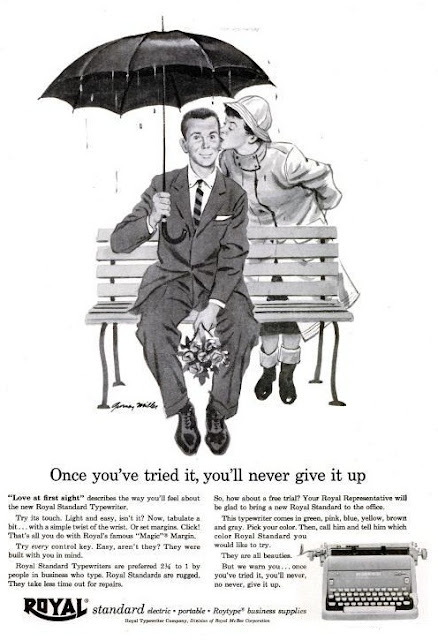 It was make or break time. As Alan Seaver added in his entry on the HH: “Typewriters were built to last.” And they did last. That meant two things: quality remained high and production costly; but, because the typewriters lasted, sales consequently failed to maintain the necessary profit levels. 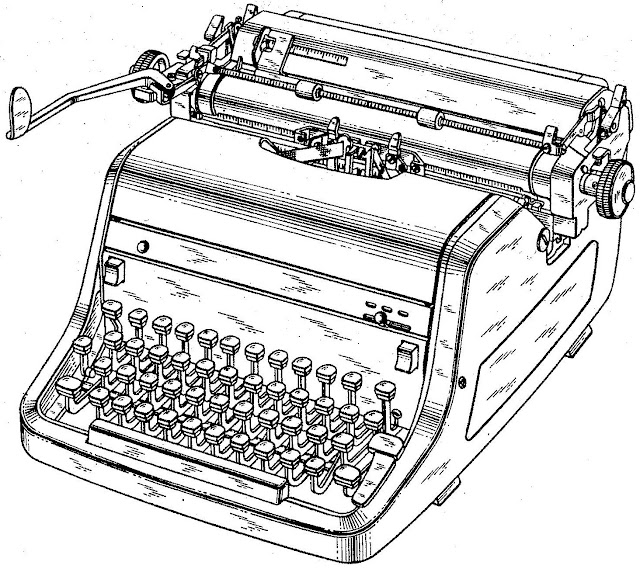 I can’t say the Royal HH was designed on this day in 1952 (actually, the 60th anniversary passed in late April), but with one mere degree of separation I can make the link. The HH design patent referenced one issued 16 months earlier, on this day (November 6) in 1951, for the Underwood electric. Georg Sommeregger Collection
But let’s start with the HH, which was in its entirety the work of Royal’s typewriter division superintendent of engineering, John Felix Kloski. Kloski’s role with Royal made him the head of the company’s research department at Hartford, Connecticut. He was working with the son of English-born former Royal factory manager Charles Belnap Cook (1876-), who I mentioned in my recent post on Edward James Manning. Cook Sr had succeeded Manning as general manager at Royal in 1911. 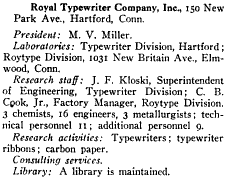 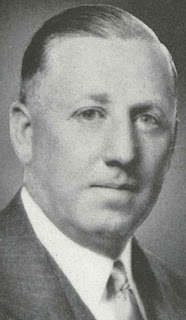 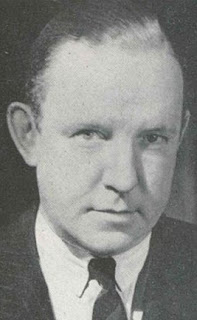 Fortune P.Ryan
President of the company at the time the HH was designed was Canadian-born Maxwell V. Miller, but Miller died in 1951 and was succeeded by one of Thomas Fortune Ryan’s sons, Fortune Peter Ryan.
Kloski also naturally referenced the 1945 Henry Dreyfuss re-design of the Royal Quiet De Luxe portable, which had a clear influence on the enlarged mask of the HH. 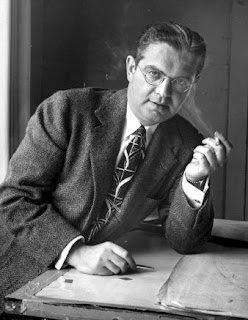 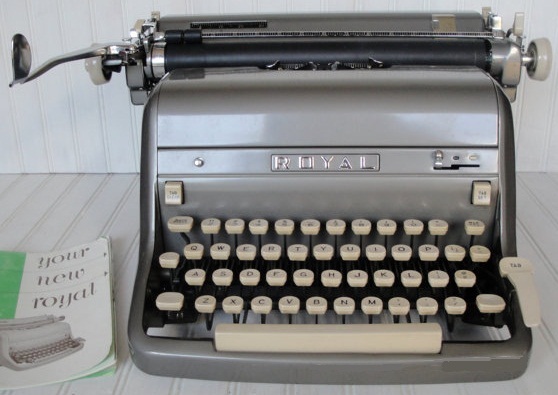 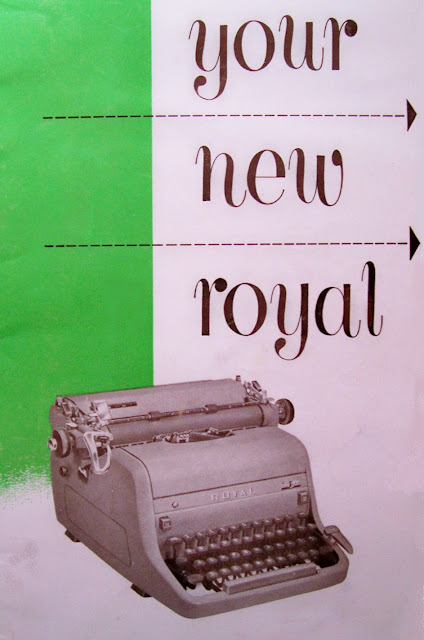 John Felix Kloski was born to Lithuanian parents in Hartford on February 8, 1902. But unlike many of his Hartford peers, he didn’t start work in the typewriter factory, instead doing his apprenticeship as a machinist in a cutlery factory. 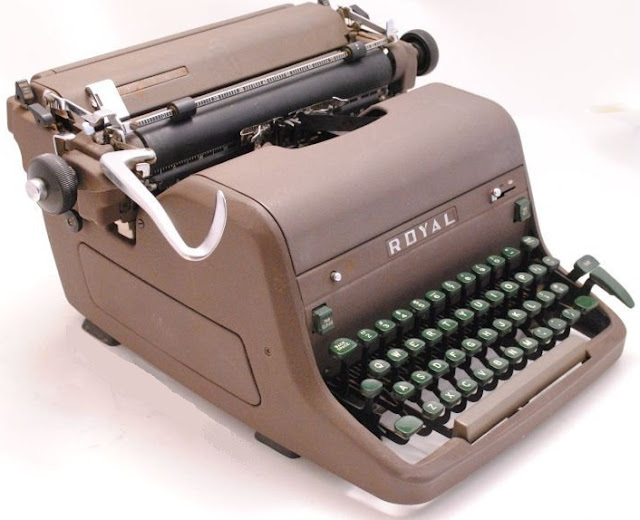 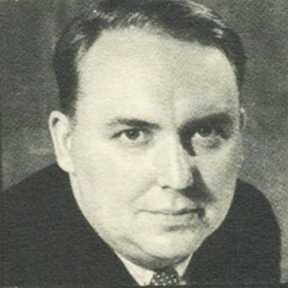 Lurelle Guild
The Underwood electric was designed by a much more famous artist and industrial designer, Lurelle Van Arsdale Guild (born Syracuse, August 19, 1898), But, then, Guild didn’t design a typewriter, but was commissioned by Underwood to produce a new look for an accounting machine. 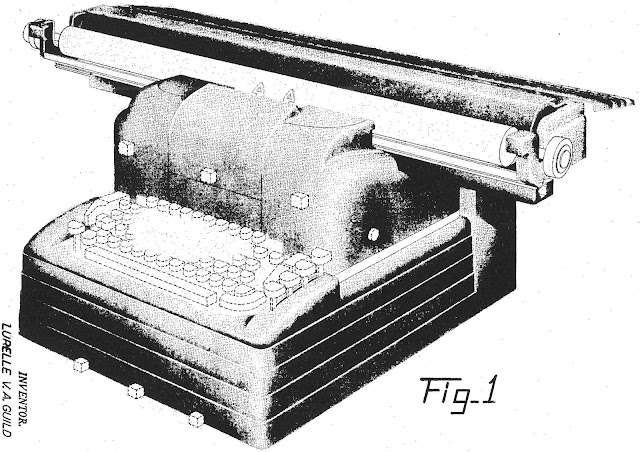 Underwood decided against producing a new accounting machine and instead used Guild’s design for a heavily advertised Underwood electric typewriter. Underwood continued to make these massive machines even after it was taken over by Olivetti in 1959, and the machine was subsequently marketed as an Underwood-Olivetti. 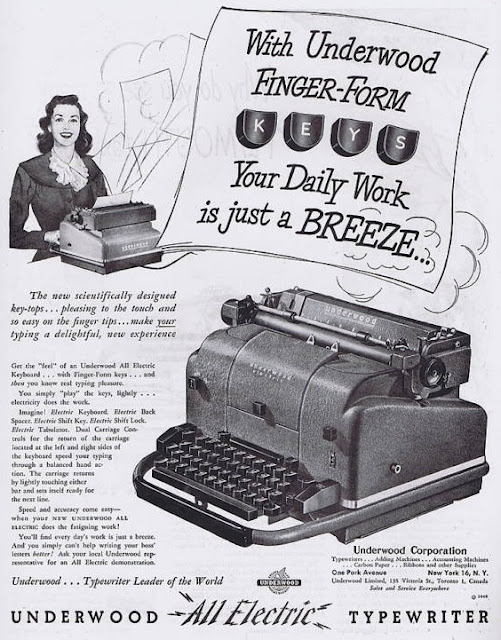 Guild was educated at  Syracuse University and began working on magazine covers but soon made a successful switch to industrial design. His most noted design is the dramatic Art Deco style of the 1937 Model 30 tank-type vacuum cleaner for Electrolux.

Guild also designed many aluminium household items, particularly a Kensington Ware range produced by Alcoa from 1934. Guild is particularly known for his long relationship with Alcoa. 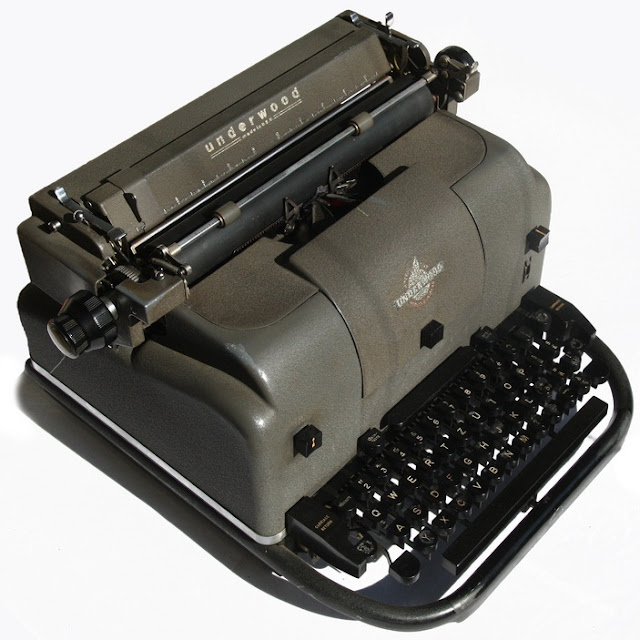 Guild was also a capable interior designer. He designed the Kensington showroom in the Rockefeller Centre in New York City and the permanent museum at Alcoa's New York offices. 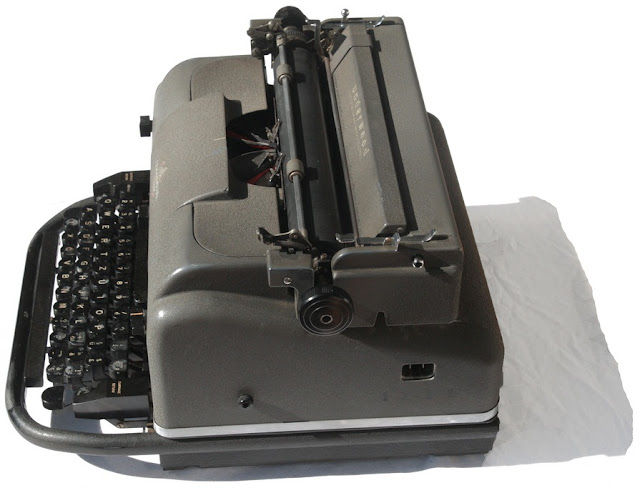 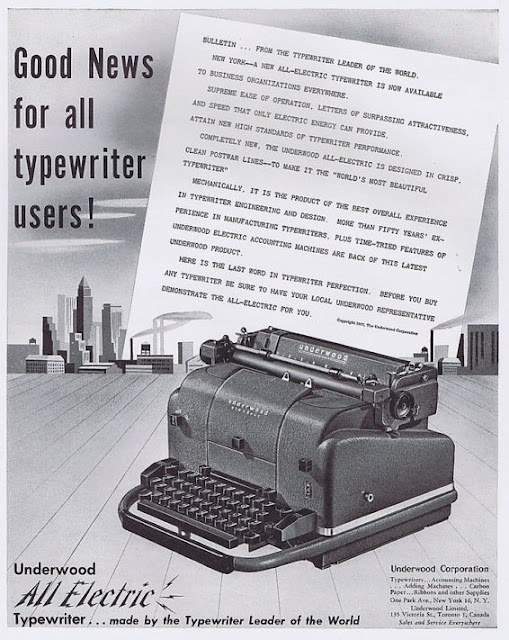 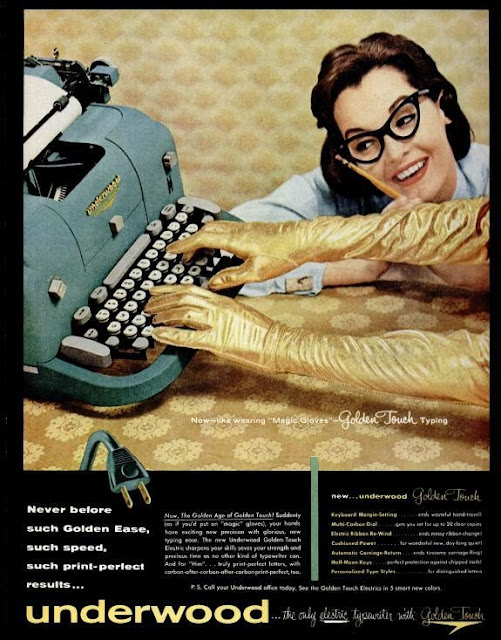 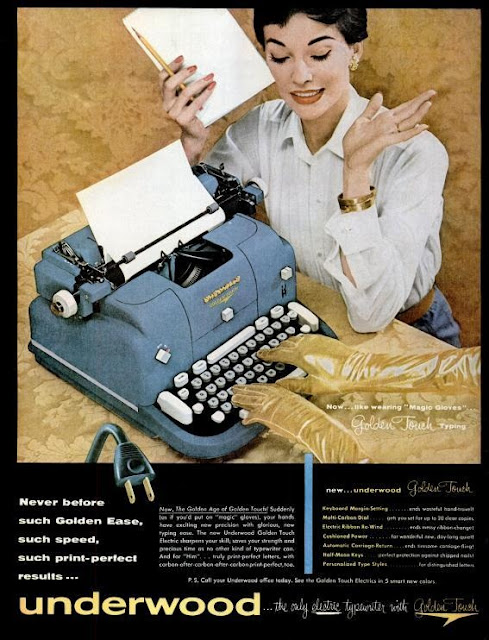 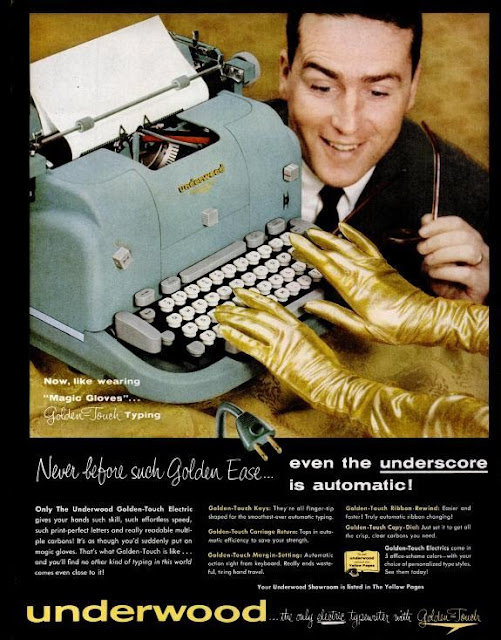 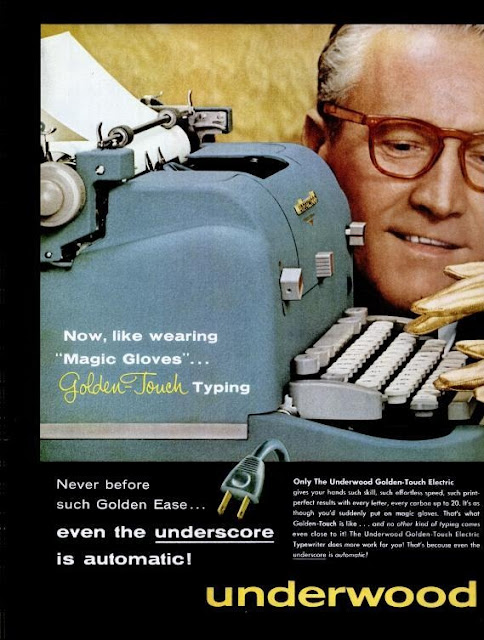 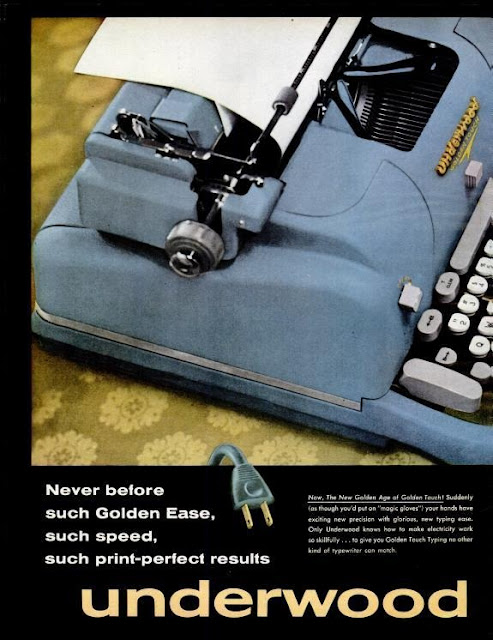 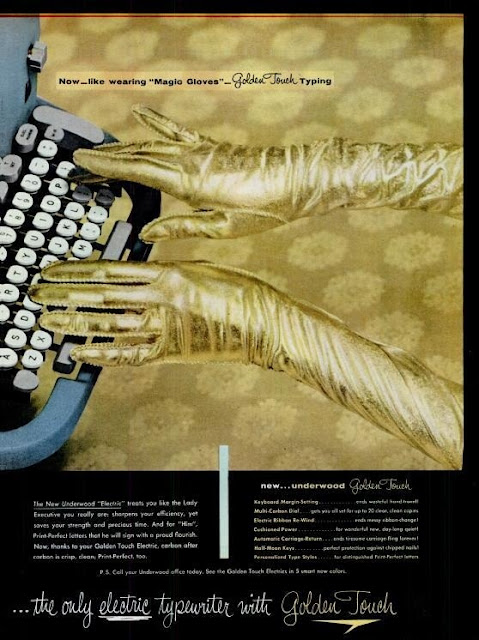 Posted by Robert Messenger at 07:56

Those Royal HHs were certainly durable works of art. This model has been on my "wish list" for a long time.

I've got a HH stored in my shed at the moment, that is on my project list. I love the look of it, but it is going to take some serious work. But hey... they are quite charming.

I ran across a very clean example (brown with green keys) in the Kansas City event antique zone. Unfortunately, by the time the price had come down someone had made off with one of the shift keys. Mean people suck.

We bought our house, built in 1954, two years ago. It was a single-owner house, and the daughter of the original owners wanted to leave some things in the basement. One of those things was a large metal desk, and there's a Royal HH in it! A friend of mine needed to use a typewriter for some tax documents this evening, so she used it. And it worked great!

I picked up a Royal HH for $15 on Craigslist . I felt bad that the young woman had posted it at such a low price, but she was happy to unload it, and I was thrilled to get it! My 12-yr-old son, with mild ADHD, has been using it to complete all kinds of school "worksheets" - his teachers are delighted to see his work come in typed - kind of nostalgic, and the actual quality of his composition is far better when he types than when he uses a computer OR writes longhand. Somehow I think the clickety-clack and the return carriage lever keep his hands busier so that his mind can work better!

The original hose on the Electrolux was (according to my murky memory) a cloth-covered, dark gray with bias plaid threads in light gray and the red of the nameplate background. Beautiful.

I have a 1952 Royal typewriter from my old sixth grade center that was torn down only recently. For some reason, I was in love with that machine when I attended school there @ 12 years of age. I've been a typewriter hobbyist for 34 years, and have serviced quite a few HH Royals. This one was (and is) special. I got it in trade when a school board member brought it to me as part of a group of typewriters he wanted fixed. I asked him if I could fix the rest of the machines and use the HH Royal as payment. He agreed, and that's how I got my special machine. As I said earlier, the school building was torn down (I copped a few bricks as souvenirs from the site), so I now have a survivor from where I attended sixth grade.

I just snagged an HH from eBay. Perfect condition for $25. I was shocked at how well it held up. All it needed was was a good cleaning and new ribbon. It's been a blast to write on :-)

Hello - I am a college student that truly loves typewriters. I have slowly been learning about them for some time and have a Smith Corona "Standard" which works wonderfully though it has some damage. Recently I had the bright idea to email one of the monks on my campus about any typewriters bubbling around in the monastery. There were about a dozen!!! I had hoped to grab a Royal of some type. Two that I saw there that really caught my eye were a Royal HH and a Royal KMM or KHM. That style anyway. I'm torn!!! Any suggestions???

They both seem to be in fair working order. The HH has what seem to be scratches in the paint along the top while the KMM was a just a bit dusty. The KMM had very cloudy keys which I didn't know if it was dust or damage. The next step I can think of personally is to ask to see them again before I choose and type on each one for a while to see if they both do truly work and if I like how one feels more than the other. HELP!!!

My dad is a retired schoolteacher, and had an HH that he used from his time in college in the late '50s/early '60s, all the way through to the '80s. He always kept it in tip-top shape, dropping it by his local office-machine shop for a tune-up periodically. I still remember falling asleep listening to him bang away on it, typing up assignments for his students. So this model holds a special significance for me. For whatever reason, it didn't make its way into my hands when he retired, and he doesn't quite know what happened to it - it seems to have been donated or sold at some point. So I resolved to find one to rehab and restore, and finally wound up scoring a 15-inch model that appears complete and without major issues - this will be my project for the upcoming spring, as soon as I finish the KMG I've been working on. Thanks for the retrospective, and some great advertising images - but the bittersweetness regarding American typewriter manufacturing is noted. Economics killed Royal and Underwood well before the computer had a chance to.