On This Day in Typewriter History: The Cahill Brothers, Electric Typewriters and Monster Music Machines 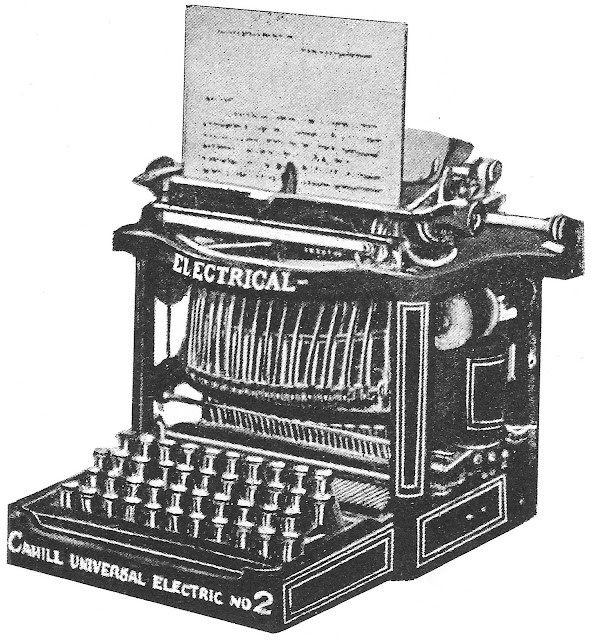 When typewriter historians hear the name Cahill, they immediately associate it with the groundbreaking turn-of-the-century electric typewriter developed by Thaddeus Cahill, based on a Remington 2. Some might also remember that Thaddeus Cahill built the world’s first electromechanical musical instrument, the amazing Telharmonium, a house-sized music producing and transmitting machine. It was the first iPod, except about a million times bigger! 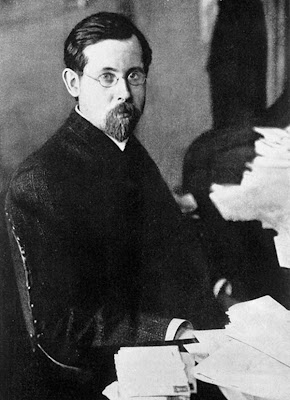 Thaddeus Cahill
The Telharmonium was planned to broadcast live music into hotels, restaurants, theatres and houses down a telephone line. It started out weighing seven tons and grew to 200 tons, with a price tag of $200,000. Only three were ever built. Not many more (about 40. apparently) of Thaddeus’s electric typewriter were made.
But Thaddeus was not the only inventor in this family, nor the only typewriter inventor. His middle brother, George Frederick Cahill, invented floodlighting for baseball matches in 1904, as well as an escalator. At the Cahill Brothers plant at 519 West 45th Street, New York, George’s “glareless duplex floodlight projectors” were built to be used at Lewisohn Stadium, Yankee Stadium, the Polo Grounds and Madison Square Garden, as well as at Forbes Field in Pittsburgh, Griffith Stadium, Washington, Wembley Stadium, London, and at the Annapolis, West Point, Notre Dame, Dartmouth, Columbia athletic fields. 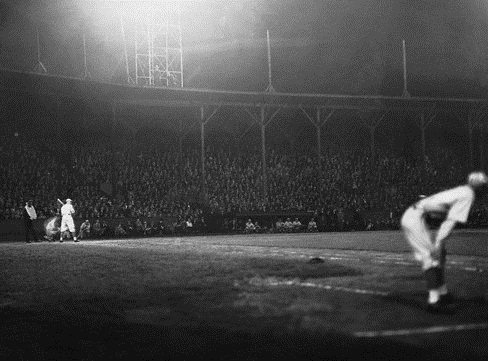 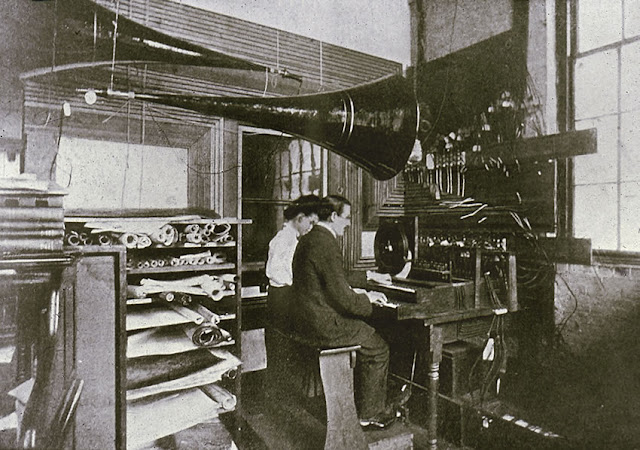 In 1938 Arthur applied for a typewriter patent. His specifications, somewhat amusingly, read in part like a conversation Arthur might have imagined himself having with the patent office examiner. 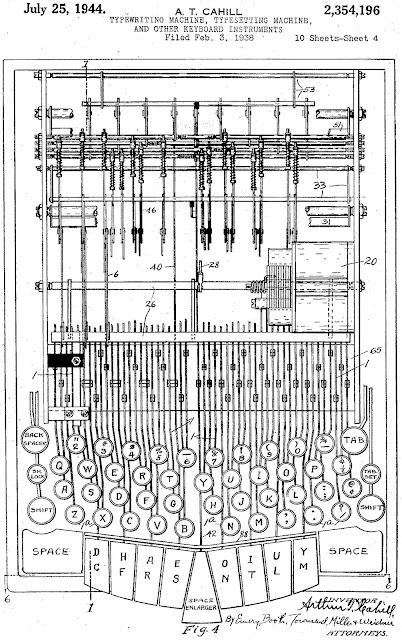 Even more amusingly, Arthur points back to a typewriter patent Thaddeus had applied for on this day (November 4) in 1899 – but which for inexplicable reasons was not granted until almost 17 years later, in 1916. Given a patent lasts for 14 years, this one would have expired before it was even issued!
Arthur wrote in his 1938 application: “The actions of the key reeds, key reed extensions, jacks, bell crank levers, levers, push pieces,  pendants, levers, pull-down wires, motor magnet, motor frame, knock-out frame, space actuating push rod etc are similar to those shown in the patent of my late brother, Dr Thaddeus Cahill, No 1,197,103, filed November 4, 1899, but not issued until September 5, 1916, and which we used in our electrical typewriters with such eminent success, and which are capable of almost unlimited speed. They are very simple, inexpensive, direct, positive, and quiet in action. They involve a minimum of simple parts and cannot easily be improved upon. In fact, none of the electrical machines put upon the market since that time approach them in the above characteristics.” 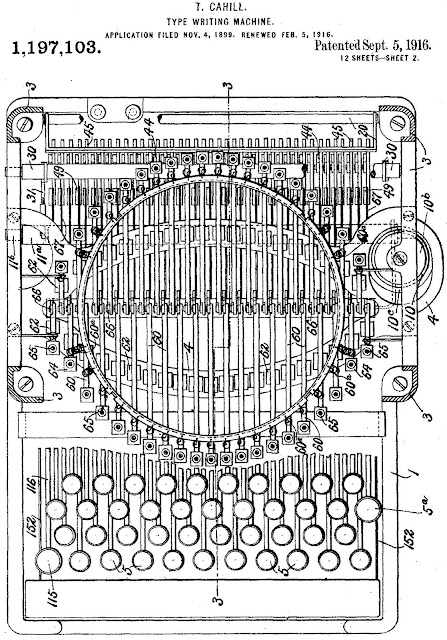 Maybe Thaddeus’s 1899 patent got lost among all the others he applied for between 1894-1902, 14 altogether, two of them for typewriter-typesetting machines.
And these were on top of a series of music-related patent applications, particularly for the Telharmonium. 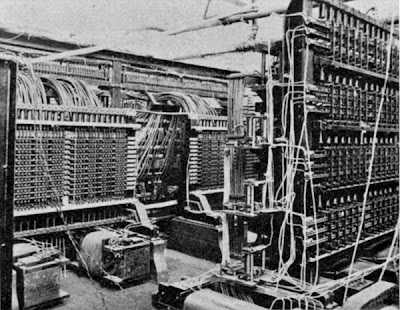 Thaddeus Cahill, who was born at Mount Zion, Iowa, on June 18, 1867, died of a heart attack in New York on April 12, 1934, aged 66. Arthur Cahill was born at Keosauqua, Iowa, on February 15, 1872, and died on January 24, 1962, aged 89.
Thaddeus Cahill attended Oberlin High School and Oberlin Academy and graduated as a lawyer from George Washington in Washington.
After brief experience at the bar he devoted himself to scientific research, mostly in connection with various new applications of electricity. 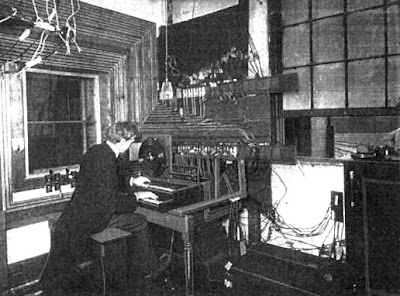 His Telharmonium produced music electrically by means of alternators or dynamos transmitting vibrations from a central station to receiving telephones.
The keyboard was similar to that of an organ; the keys operated switches so as to bring the several alternators into action on the lines or mains as required. The notes produced were of a remarkable purity, being surpassed only by that of a good string. The performer had absolute control over the notes, both as to expression and timbre; he could produce at will the note of practically any instrument, and even notes of an entirely new quality. Since any number of receivers could be connected to a single keyboard, it was possible for a single performer to be heard in practically any number of places at one time. 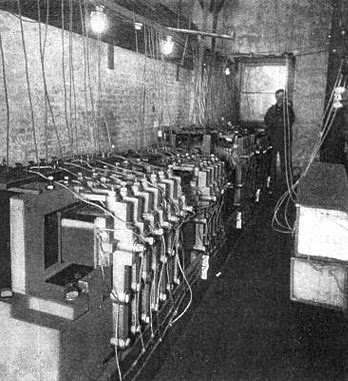 In 1902 Thaddeus moved his laboratory from Washington to the Cabot Street Mill, Holyoke, Massachusetts, and in 1911 established it in New York, where he was granted a franchise to put wires in the streets. The New York Cahill Telharmonic Company plant was built at 535 West 56th Street and, in 1912, musicians playing there on electrical keyboards were heard by audiences in Carnegie Hall, elsewhere in New York, and in Boston, Springfield, Baltimore, Washington, and other cities. However, the Wurlitzer organ overtook the Telharmonium, as did wireless transmissions. The New York Cahill Telharmonic Company was declared bankrupt in December 1914. 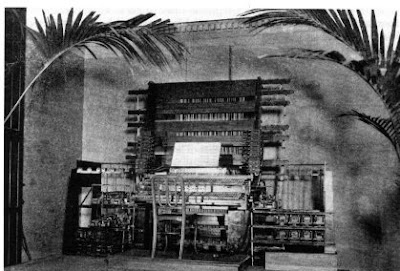 In 1951 Arthur circulated a letter appealing for someone to give a home to the last remaining Telharmonium, the first one built, a 14,000lb monster Arthur had kept in storage at his own expense for almost 50 years. Arthur wanted "a permanent and a public home for this priceless monument to man's genius". There were no takers. Arthur sold it for scrap. 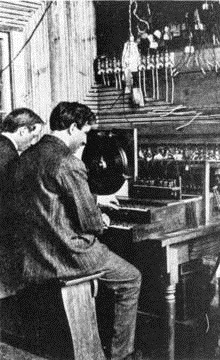 The story of the Cahill family's last years is told in the epilogue to Reynold Weidenaar's excellent 1995 book, Magic Music from the Telharmonium: 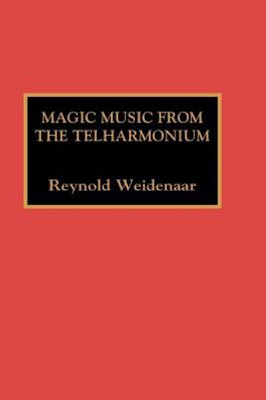 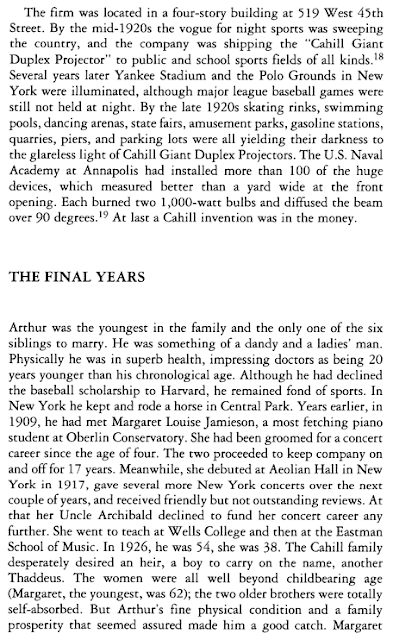 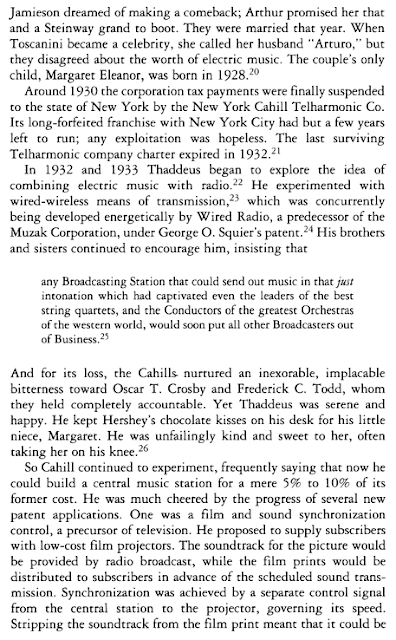 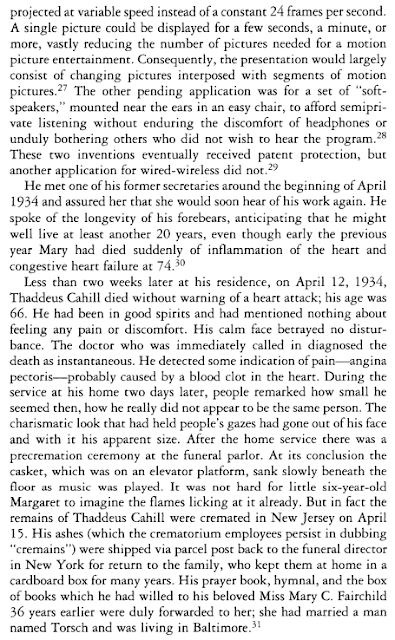 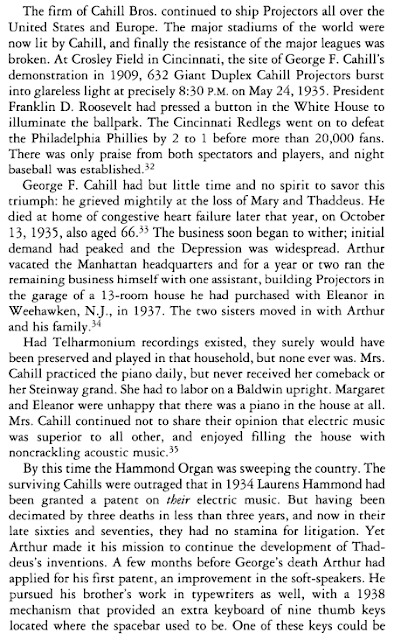 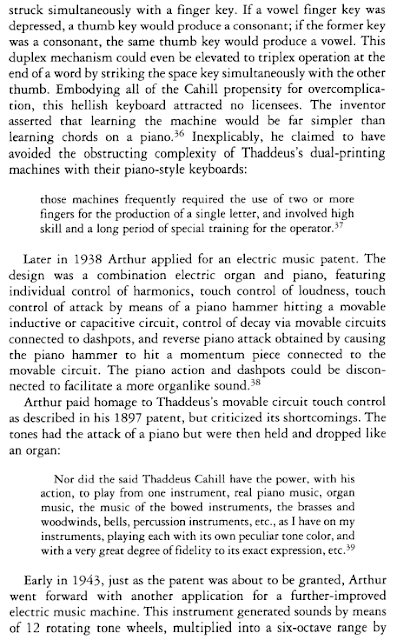 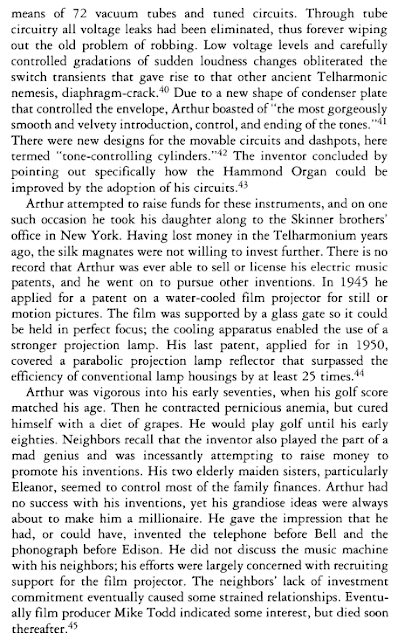 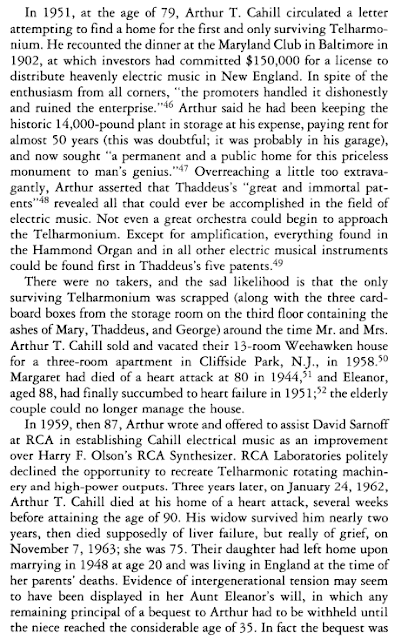 Posted by Robert Messenger at 09:05

That Telharmonium is an awesome, phantasmagoric thing.

Anyone interested in the Cahill typewriter should see the major story about it in the December 2012 issue of ETCetera.