On This Day in Typewriter History: Trying to Unravel the Victor Mystery 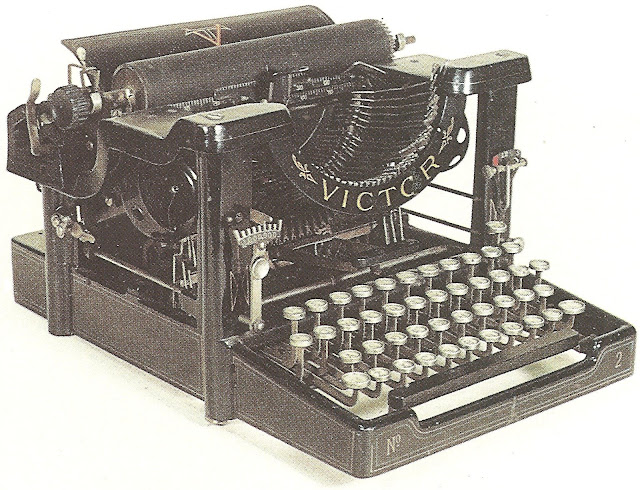 Michael Adler in his 1997 Antique Typewriters didn’t attempt to “go there”. He dismissed the Victor Standard in 10 pithy lines (labelling it the #2, with the 19th century typewheel index Victor as #1).
(There is, by the way, a connection between the Victor index and the Victor Standard: the Victor index was made by the Tilton Manufacturing Company in Boston, which also made the Franklin until the Franklin was taken over by Victor in New York).
Adler grasped, perhaps, that trying to explain something of the Victor Standard’s history would be anything but plain sailing, so for him they would remain uncharted waters. At least he didn’t give it the string of “Zzzzzzzz” he bestowed upon a third Victor, from the Victor Adding Machine Corporation (no mention of the Max Garbell portable here, nor the Venus). 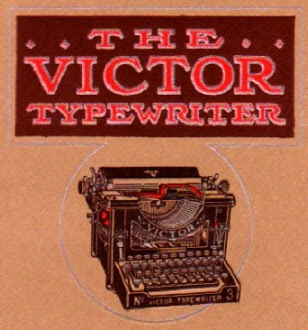 Peter Weil Collection
But Paul Lippman in his 1992 American Typewriters was wide awake to the possibilities presented by the Victor Standard, and had left some clear marker buoys. The Victor Standard, he wrote, “was developed by J.A.Hagerstrom, George W. Campbell and William H. Hulse, with the first patent issued in 1907”.
This isn’t precisely what A Condensed History of the Writing Machine (1923) said. Bearing in mind entries in A Condensed History were, in, the main, contributed by the manufacturers themselves, what was published is worth considering. “The United States patents of greatest importance covering features of the Victor Standard typewriter began with one issued in August 1907, and there has been a continual succession of patents granted every year up to 1923.”
“J.A.Hagerstrom was the principal inventor and engineer in connection with the development of the Victor, being assisted through the years by George W.Campbell and others. The broad base, pivot-bearing typebar, which is an outstanding chief feature of the Victor, is an invention credited to William H. Hulse, who came from Montreal, Canada, and who was for a period several years ago actively connect with the Victor company.”
The big question all this leaves us asking is this: To whom was the all-important Victor patent of August 1907 issued? To Hagerstrom? Campbell? Hulse? Or, as Will Davis teases us on his webpage devoted to the Victor Standard, someone else entirely? 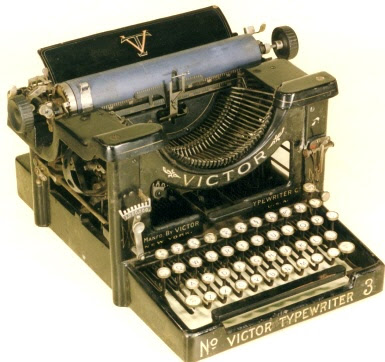 Collection of the late Tilman Elster
If we could find this mystery patent, it might offer the key to unlock the enduring puzzle of the Victor.
Trouble is, there were 18 typewriter patents issued in the month of August in 1907, and not one of them was assigned to Victor (or the International Text Book Company for that matter; more on that later). And none to any of the candidates listed above, nor to the two names Will has taunted us with: Frank J. Tanner and Iwan E. Jones.

Peter Weil Collection
Now Will Davis is gamer than the average sailor and he has launched himself right into these murky waters. If anyone is capable of reading into the patents and the advertising material and revealing the Victor’s secret, it is he. Yet even Will admits it’s “tricky to properly interpret [the information] without the inclusion of assumption”.
And I have to agree that sorting out the connection between the International Text Book Company-International Correspondence School and the Victor Typewriter Company seems impossible.
There is no doubt that Tanner and Jones, along with Edwin Griffin and Henry M. Hamilton, were applying for typewriter patents, assigned to the ITBC, from 1907 right through to 1913 – six all told. And the ITBC-ICS was in Scranton, Pennsylvania, where Victor finished up. But while the typewriter Tanner et al were working on looks similar to the Victor, is it in fact the same machine?
And given Victor already had Hagerstrom, Campbell and Hulse applying for patents on its behalf – 13 altogether, between 1904 and 1920 – does it seem likely that one largely conventional typewriter would have, devoted to it, seven designers and 19 patents?
Well, as A Condensed History said, there was a steady stream of patents, every year from 1907 to 1923. Possible, I suppose. 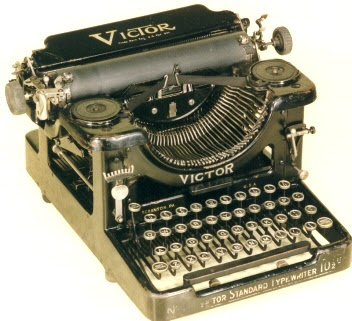 Collection of the late Tilman Elster
Will Davis says that in this case we need to make assumptions. My assumption is that the ITBC-ICS was planning to produce a typewriter. When it took over Victor, it found it could ditch those plans (and the patents of Tanner et al) and go with the existing Victor – albeit a Victor (the No 10) with significant changes made by Hagerstrom and Hulse, not by Tanner et al. By the way, don’t get confused by the figure 10½, which appears on the right front of the Victor 10. This relates to the width of the carriage in inches, it is not a model name. Many, however, have called this model the 10½, which is incorrect.
There was a very obvious flurry of new designs, covering virtually every single component of the typewriter, from Hagerstrom between 1917 and 1919, My assumption here is that the ITBC wanted to market a complete revamp of the Victor, and Hagerstrom provided – coming up with the Victor No 10, which reached the market in November 1919. 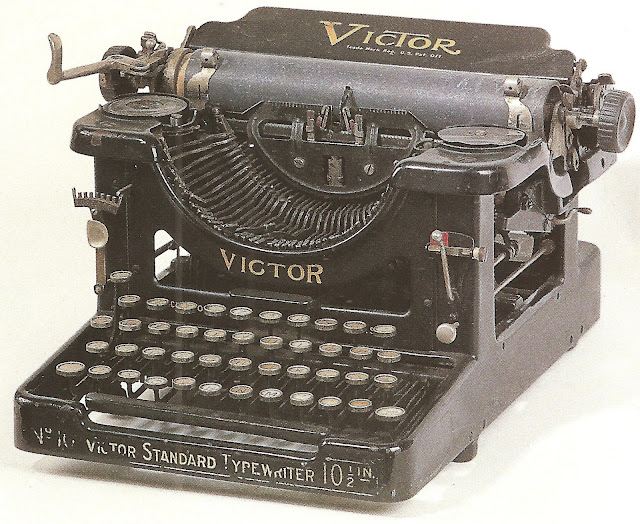 Thomas A.Russo Collection
A Condensed History only adds to all this confusion by saying the Victor “was first developed in Boston”, which rules out Hagerstrom, Campbell and Hulse. Perhaps it is simply a veiled reference to Wellington Kidder Parker’s Franklin? After all, Victor took over the Franklin factory.
On the subject of veiled references, does A Condensed History’s use of the words, “ownership of the Victor enterprise passed into the possession of the ITBC” suggest the ITBC already had a stake in Victor? “Shortly after … a $2,625,000 corporation was formed to buy outright from them [the ITBC?] the entire assets of the Victor and operate as the Victor Typewriter Manufacturing Company. This did not materialise and the factory was moved in 1917 to Scranton, Pa, the home of the ITBC in operation of their famous ICS.”
Perhaps ownership of the Victor company passed to the ITBC in late 1915. On December 1 of that year, the company appears to have restructured under the presidency of Mayne R.Denman. However, A Condensed History obscures the matter further by stating, “[Denman] has continued to occupy that post through the former [ITBC?] and present ownership, now separate from ICS interests.” It would seem Victor left ITBC-ICS in February 1921. From 1917, and the move to ITBC’s home in Scranton, Victor, under Denman’s ongoing leadership, had concentrated on the overseas market, being sold in Germany at the Diktator. 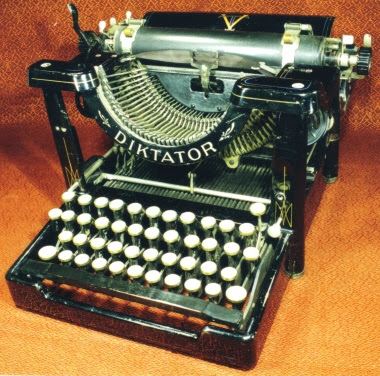 Thomas Fuertig Collection
In 1925 Victor’s name and goodwill were sold to the Victor Adding Machine Company, which planned to relaunch Max Garbell’s portable as the Victor portable. The Victor Standard, meanwhile, went the way of so many other standards: to Harry Annell Smith.
Maynard Raymond Denman was born in New York on April 16, 1867. He was educated at Greensburg High School, Pennsylvania. and Dugg's College, Pittsburg, after which he became city editor of The Press in at Greensburg. After some years as a travelling salesman he joined the Smith Premier Typewriter Company. He died in Los Angeles on September 14, 1954, aged 87. 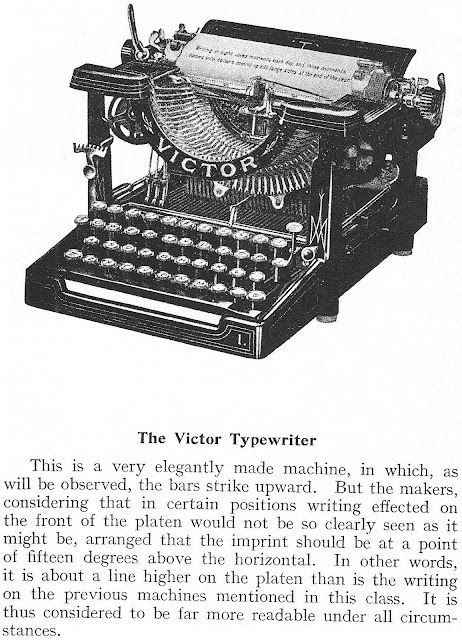 Mares (1909)
It was in 1917 that the Victor No 10 began to take shape with the plethora of patents from Hagerstrom.
But Hagerstrom began assigning typewriter designs to Victor 10 years earlier. One of his typewriters was assigned to Victor on this day (November 2) in 1909.
John Anders Hagerstrom was born in Sweden on March 4, 1872, immigrated to the US, arriving on March 15, 1894, and was naturalised on February 6, 1905, at a time when he was working in New York as a toolmaker. He also patented his first typewriter design that same year.
I think I will base my assumptions on comments made by Paul Lippman in American Typewriters, even though he calls the model the 10½. Paul made the point that the Victor Standard has two outstanding mechanical distinctions: its typebars and its ribbon path. 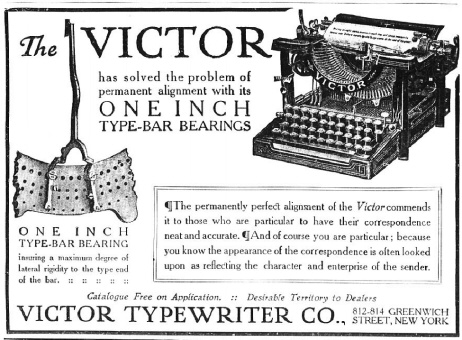 Peter Weil Collection
We can fairly and squarely put both of these distinctions down to Hulse and Hagerstrom, without fear of contradiction. That is, we can say with absolute certainty that these were not to work of Tanner, Jones or any other designer associated with the ITBC-ICS.
The patents for these distinctions are there for all to see. Not alone did Hagerstrom design the original ribbon path (in 1907), but also the later more conventional straight path (in 1919). Hagerstrom came up with a ribbon vibrator which automatically adjusted itself to varying thicknesses of paper on the platen, in order to avoid ink smears on the paper or platen. 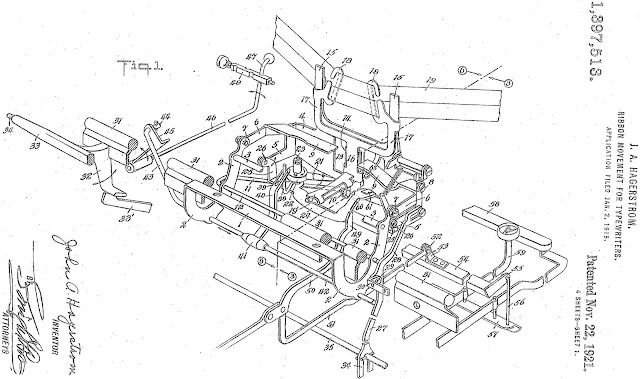 Hagerstrom's original typebar system was patented in 1906. In simple terms, the typebars had a forked end and double mounting. The "one-inch" bearing was promoted as ensuring Victor's typebars couldn’t go out of alignment, 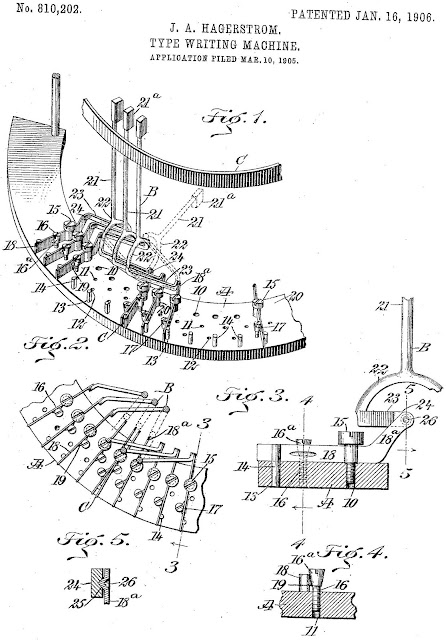 A Condensed History of the Writing Machine was unconvinced Hulse had come up with this idea, and wrote, "A typebar with two legs and its bearings an inch apart, whoever created it, stands out prominently as identifying part of the Victor's construction."
William Hervey Hulse was born into a family of turners and fitters in South Durham, New York, on June 13, 1869. At the tender age of 22 he applied for his first patent for a typewriter, jointly with his older brother James Vernon Hulse Jr. James had applied for a typewriter patent two years earlier, in 1891, when he was 24. William applied for his first “solo” typewriter patent in 1898, aged 27.
William furthered his typewriter industry career by working for Williams Manufacturing Company in Montreal, where Kidder's Empire was being made. He returned to the US some time after 1904 to start working for Victor.
In the 1920 US census, William Hulse described himself as a typewriter inspector and James Hulse as a typewriter manufacturer – but whether it was for Victor is unknown. 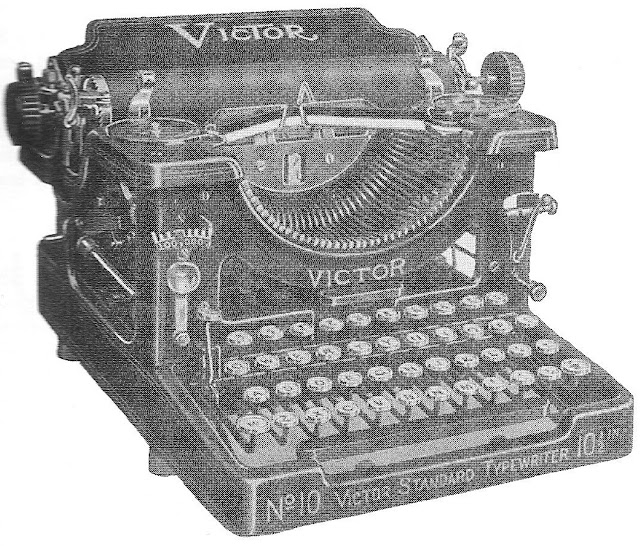 Immediately after Victor left the umbrella of ITBC-ICS in February 1921, William Hulse and George William Campbell switched allegiance to Underwood. Campbell continued designing for Underwood until the mid-1920s, but Hulse died suddenly on June 25, 1921, aged just 53.
For such an unexceptional typewriter, the Victor had an extraordinarily involved history. It has taken me five days just to write this much about it, putting me five days behind schedule in the "On This Day in Typewriter History" series. No wonder Michael Adler steered his boat well clear of it!

Very interesting to see some of the backgrounds of folks I'd named in my research but really never knew anything about!

We do have a Victor No. 2, No. 3 and No. 10 here and eventually we will get around to the point by point comparison we've promised. It's really clear that the No. 10 is directly derived from the earlier models but 'rationalized,' or should I say 'conventionalized' with a more modern (ignoring Remington, of course) mounting of the ribbon spools and the abandonment of the slight overstrike position of print found on the previous models.

I did a typing test of the Victor No. 10 some time back, and the results of that were rather interesting: http://davistypewriters.blogspot.com/2011/01/victor-no-10-quick-look.html

Thank you Will, your comments and additional observations are always greatly appreciated. Do you think it mildly amusing that we can spend so much time mulling over such a typewriter, or is it just part of the rich tapestry of typewriter fascination?

This is now ***the*** standard reference on the Victor. Great job untangling so much of the mess and myths.

Hi. I have acquired some vintage ephemera which includes a Victor typewriter model 3 instruction booklet. If you would be interested in this, please contact me. Great research. Cheers.