On This Day in Typewriter History: Milwaukee Museum Chatter about the World’s Greatest Typewriter Collector 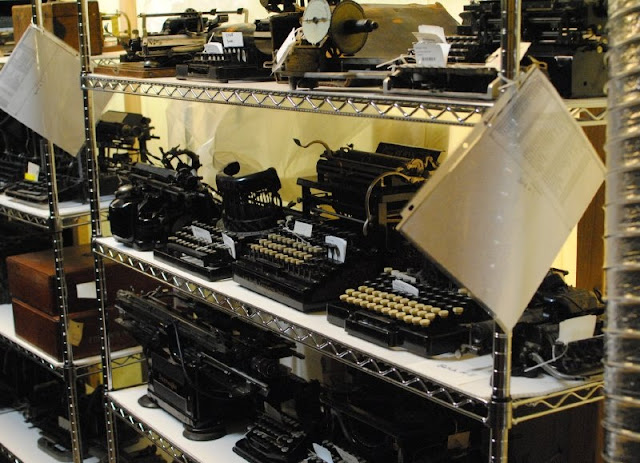 All images from the Milwaukee Public Museum's Dietz Collection
This is going to have to be a quick post, because in a little more than five hours Christine Del Re will be giving her talk on typewriters in the Gromme Theatre of the Milwaukee Public Museum. Christine’s presentation starts at 10am Wisconsin time this morning (November 15) and here am I still stuck in Canberra, a mere 17 hours ahead of Milwaukee!

Christine’s talk is called “Typewriter Chatter!” and is part of the MPM’s “Chat With a Museum Expert” series.

The MPM says, “The evolution of the typewriter is part of the ongoing history of a human need to communicate. Join Museum conservationist Christine Del Re and discover the golden age of the typewriter and its familiar sound through the Museum’s award-winning typewriter collection, a behind-the-scenes tour and live chat.” 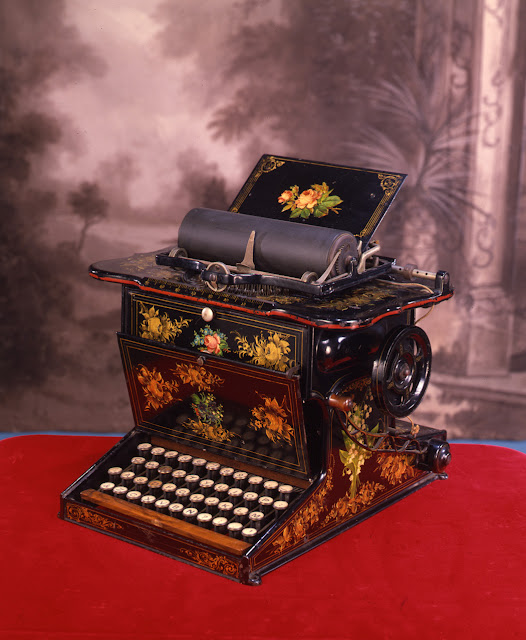 Apparently the museum has 876 priceless old typewriters, in the main from the Carl Praetorius Dietz Collection.
In 2009 the museum received a $250,000 federal grant to restore the collection. The restoration job, which involves cleaning and "stabilising" the collection, will be completed next year. 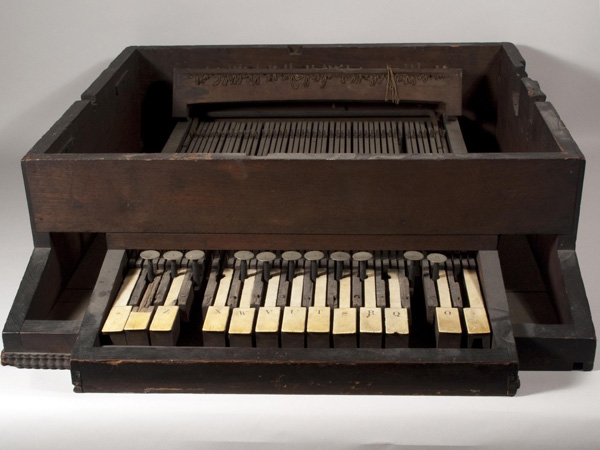 Sholes prototype
Dietz, a one-time stage juggler and song writer, was a Milwaukee alderman and MPM president whose interest in collecting old typewriters stemmed from the fact that Christopher Latham Sholes had invented the typewriter in Milwaukee.
Dietz began collecting in 1934 and during the next 20 years donated more than 400 typewriters to the museum. 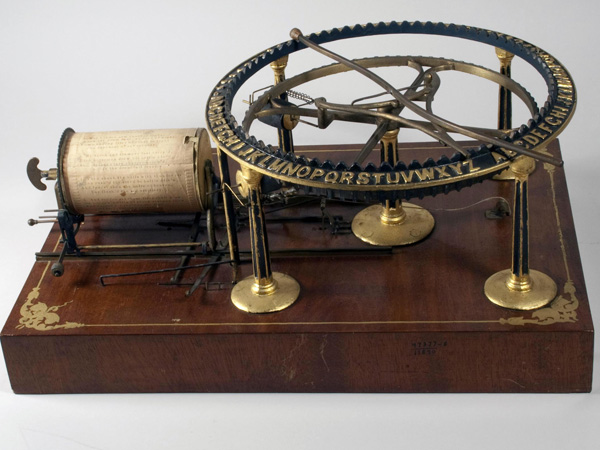 The oldest machine in the collection is the Jones mechanical typographer (above) from 1853. Others include some of the rarest typewriters in existence. Notable is an ornate gold-plated machine with mother-of-pearl keys that Edward VII presented to Queen Alexandra after their wedding. 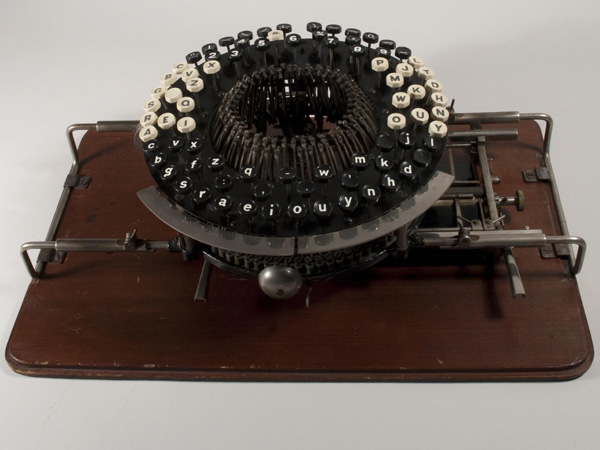 Crary
Dietz started his collection with a typewriter which was the same model as the one he had used as a boy, and it gave him an idea: "[I] recollected that Milwaukee is the birthplace of the modern typewriter, and it occurred to me that someone ought to make a collection for the museum. Then I decided to do it myself … in the belief that 10 or 15 machines would cover the field. I didn't know what I was getting myself into."
Carl Praetorius Dietz was born in Newark on September 19, 1875, the son of German-born parents, Baptist minister the Reverend Henry Louis Dietz and his wife Johannetta Praetorius Dietz. 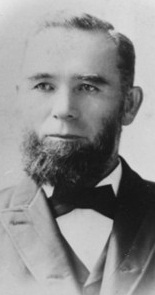 The Reverend Henry L.Dietz
Mrs Dietz died on August 1, 1907, and the Reverend Dietz died in Oakland, California, where he was living with his daughter Lillie, on January 5, 1918, 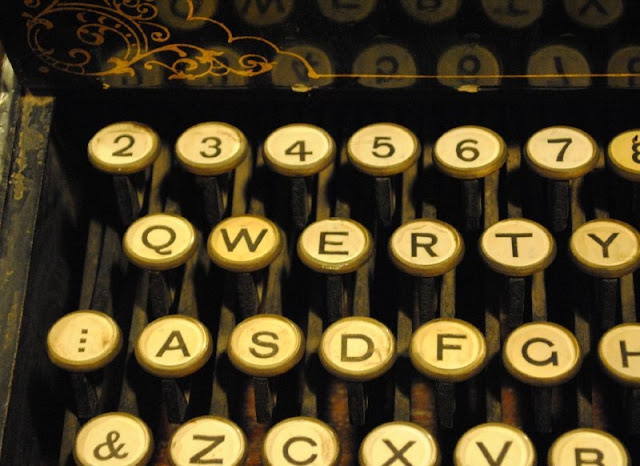 Carl Dietz attended Milwaukee public schools, a boys high school in San Francisco (where he was father was United States Conference of German Baptist Ministers general missionary) and studied at the German-American Academy at Rochester, New York.
Dietz then worked in law work for three years in San Francisco before returning to Milwaukee. For a time he was connected with mercantile agency work in Chicago and Milwaukee.

In 1904 Dietz was called to public office as justice of the peace of Wisconsin’s ninth judicial district and was re-elected for three terms. He was also acting judge of the district court, becoming the first socialist to occupy the bench in a court of record in the United States. 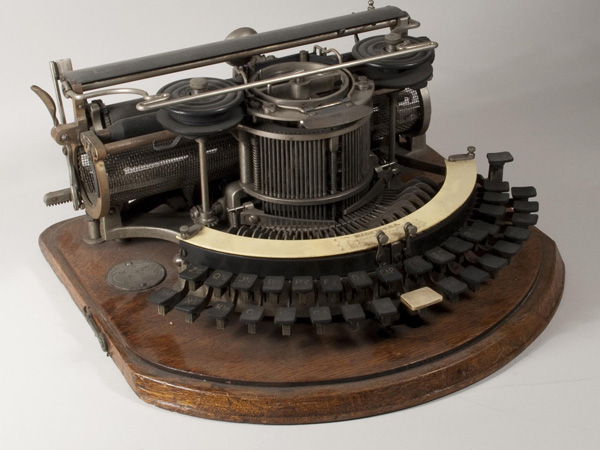 In 1910 Dietz was elected Milwaukee city comptroller for two years. In 1912 he entered the insurance business. He was elected an alderman of the tenth ward in 1918 and continued as an alderman until 1948. Dietz was responsible for the first scientific budget for Milwaukee. He served as MPM president from 1938 to 1953.
Dietz died in Milwaukee on October 29, 1957, aged 82, leaving behind him the world's greatest treasure trove of typewriters.
But it wasn't just collecting typewriters that interested him - Dietz also researched the early history of the typewriter in Milwaukee, and collected old bicycles:

Posted by Robert Messenger at 22:36

I heard about the Milwaukee Museum, but never knew much about it. Thank you Robert for the fine history of the Museum & Mr. Dietz.