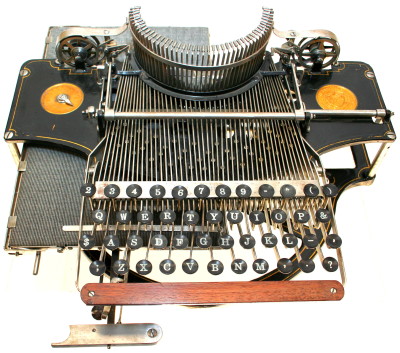 If Arthur Wise Cash could have made from his Typograph typewriter in the early 1890s the sort of money it would turn out to fetch 120 years later, there’d be a lot more of them around today. But it’s precisely because the Typograph is now so scarce that Branford House Antiques in Vermont was able to sell one, in mint condition (see above), at auction in March for $25,000. 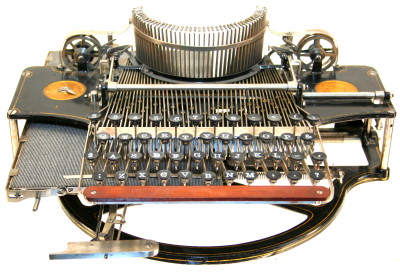 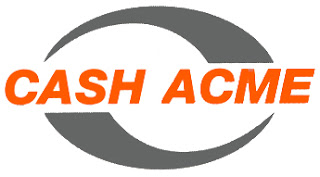 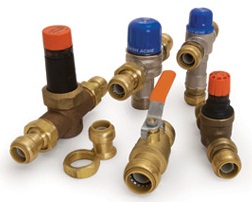 Many other Cash inventions are much more readily available – including in Australia and New Zealand, Canada, South America, Britain and elsewhere in Europe. And a lot more cheaply, too! Well, after a fashion, that is. Cash Acme of Seventh Avenue, Cullman, Alabama, operates today as a continuation of the same organisation, the A.W.Cash Valve Manufacturing Company, that Arthur Wise Cash founded in Decatur, Illinois, in 1919. 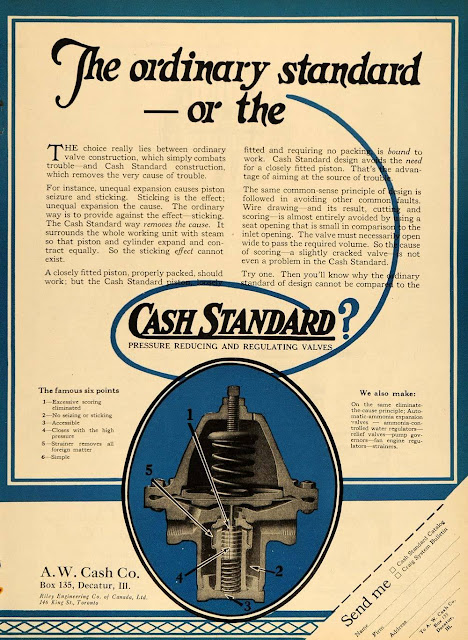 In 1927 Cash sold the company to the Madden family, who owned it until 1991, when it was taken over by IMI. It moved to Cullman in 1997 and was acquired in 2002 by the Reliance Worldwide Corporation. 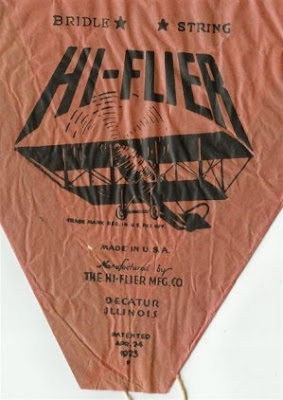 It is also possible nowadays to buy and fly replica Hi-Flier kites. Cash designed these, too, and sold the rights to a fellow Decatur businessman, Harvey A. Sellers, in 1922.
But during his long lifetime, Cash himself was certainly no high-flier. He was born on June 8, 1859, the 11th of 12 children, on a farm outside Port Royal, Caroline County, Virginia. When just four, he lost both his parents – his father Oscar died on August 6, 1863, after being thrown from a sulky by a runaway horse, and his mother Mary succumbed to typhoid fever four months later. One brother died in the Civil War, a sister in childbirth, aged just 17, a brother and sister from typhoid fever and another sister died from burns received as a toddler. 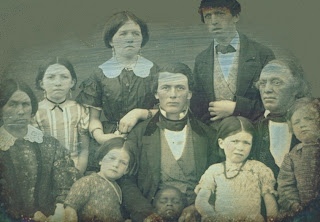 Cash Family, 1858, the year before Arthur was born
On April 26, 1865, 12 days after the assassination of Abraham Lincoln, John Wilkes Booth was cornered and killed in a tobacco barn at Richard Garrett’s farm, the property next to the Cash homestead. 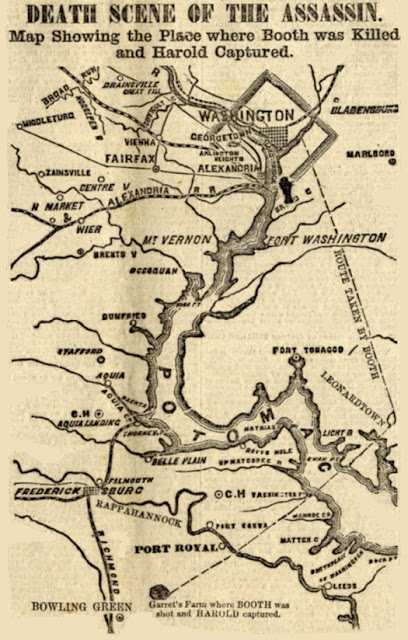 That event may remain Port Royal’s greatest claim to fame, yet Arthur Cash himself once pointed out, “Port Royal was given consideration for the capital of the United States.” And surely Cash did enough in his life to deserve a town marker of some sort. 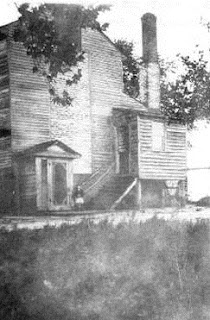 The Garrett homestead, next door
Cash received a little formal education, in Macon, yet began his inventing career in a suitably ambitious way, just after his 23rd birthday, in 1882, with a “check-rower for corn-planters”, a design half-assigned to his one younger brother, Oscar. The following year he patented a paper-bag and twine holder. 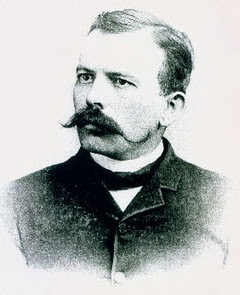 The rather earnest looking young Mr Cash
Cash and his Typograph were the subjects of a very well-researched and well-written lead article by Ed Neuert in the June 2010 issue of ETCetera (No 90), so I will just touch more briefly on the subject today. 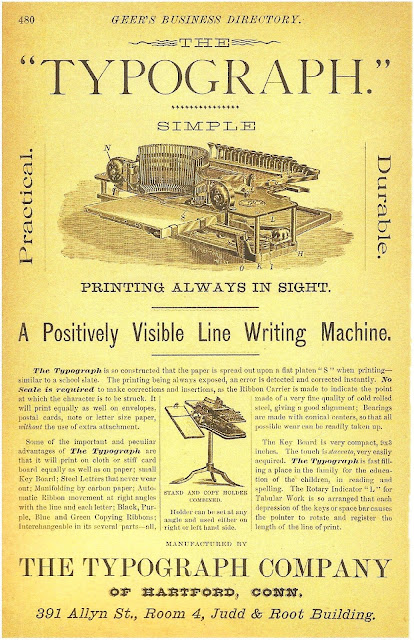 Ed says the Typograph was an early example of a typewriter anticipating the solid semi-circular segment. 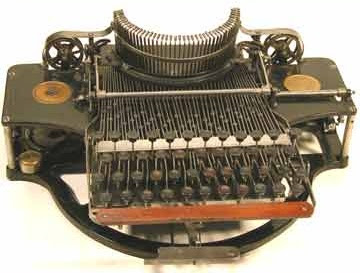 Exactly one month before his 25th birthday, in May 1884, Cash applied for his first typewriter patent. This was later assigned to the Typograph company, and not issued until 1890, about the time the Typograph went into limited production. 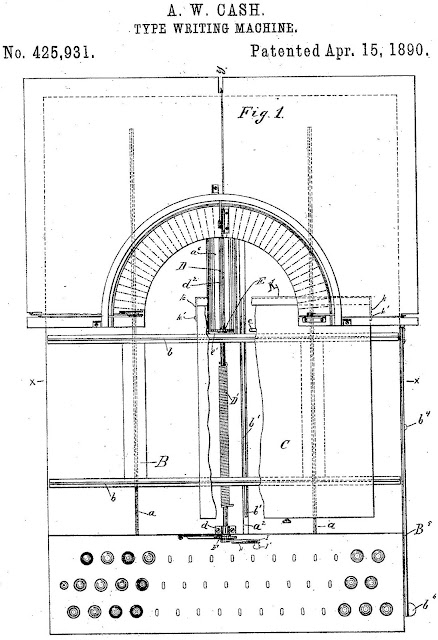 Cash moved from Decatur to Hartford, Connecticut, to continue work on the design and presumably establish the Typograph company to produce his machine. He applied for two more patents in 1886. On this day (November 1) in 1887, he was granted two further patents, in both the US and Britain, for the final version, this time each being assigned directly to the Typograph company. 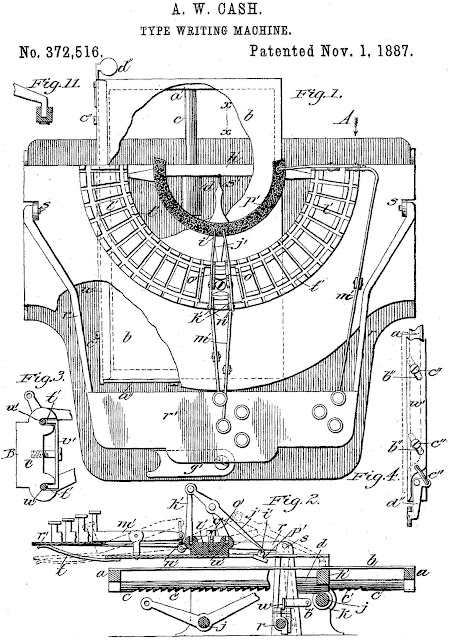 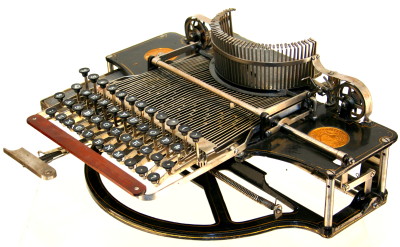 One of the designs from this period languished unissued for 16 years, until 1902, when it was assigned to the Elliott & Hatch Book Typewriting Company of New York, presumably because Cash’s Typograph was so similar to what that year would emerge as the Elliott book typewriter. 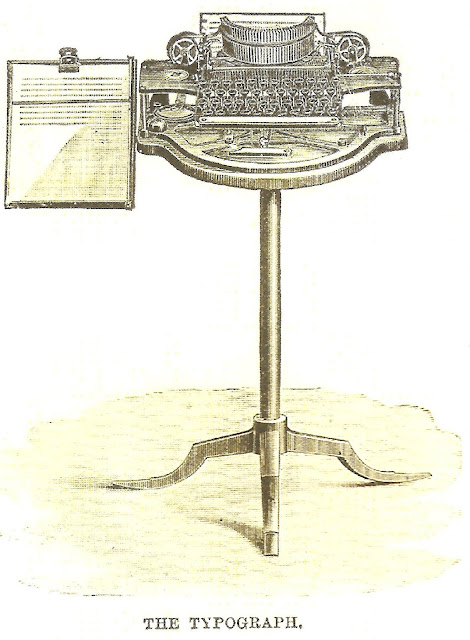 As Paul Robert points out at the Virtual Typewriter Museum, the Typograph’s “most striking feature is the fact that the paper is placed on a full-sized paper table and lies flat, as the type strikes down.” Paul estimated that just three remain in existence.
Paul explains: “The ribbon spools of the Typograph are placed to the left and right of the vertically placed typebars. The entire typing mechanism is placed on top of the machine. The open space between the base and the mechanism holds the letter-sized paper table with enough room for it to move in all directions on rolls.” 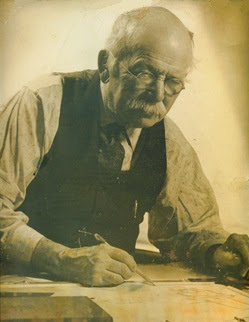 Arthur Cash hard at work designing
Ed Neuert revealed in his ETCetera article that Cash did not work on the Typograph alone, but from 1888-81 had input from George H.Woods, superintendent at the Typograph factory,  and Jerome B. Secor, later superintendent of the William typewriter factory in Derby, Connecticut, and creator of the Secor typewriter. 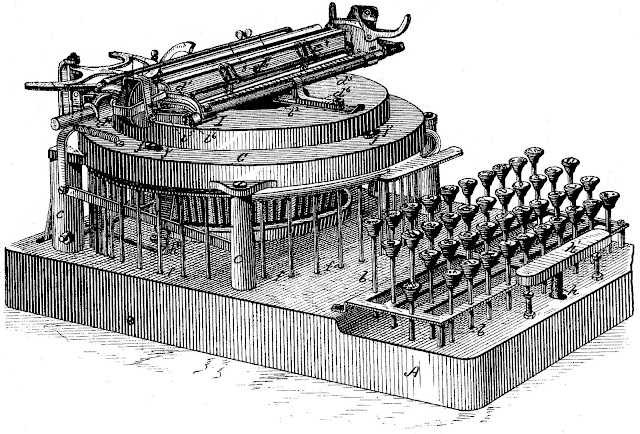 Ed also drew attention to an extremely interesting but unmanufactured Cash typewriter design, assigned to the Typograph company, for an understrike typewriter - Ed called it a "low-rider Yost". Its ribbon assembly travelled along on its carriage.
In 1887 Cash, now married (to Nellie Barnett), moved to Bridgeport, Connecticut. While he continued to work on perfecting the Typograph, applying for two more patents, he also started to extend his designing to a vast array of other items: a horse tail band, cuff holders for an assignee in Louisville, and sock holders (garters) and shoe stretchers for wealthy Bridgeport businessman and property owner Frank Armstrong. 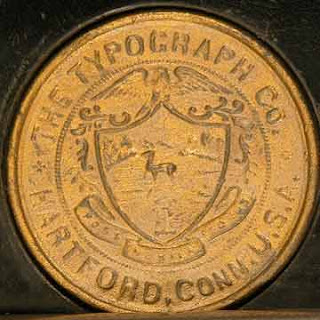 Cash began working for Armstrong in 1890, venturing into a whole new area of invention: die and tap cutting machines, nipple-chucks and a pipe-vice. But Armstrong died in 1893, forcing Cash to look for other opportunities.
The work in Bridgeport led to Cash being issued with the toughest challenge of his career: designing valves for early US Navy submarines. It was family legend that Cash’s interest in pressure-reducing valves began when, as a youngster in New York, he was employed by a streetcar company which planned to operate cars with compressed air. The air compressed under high pressure in tanks had to be reduced before it could be supplied as power. 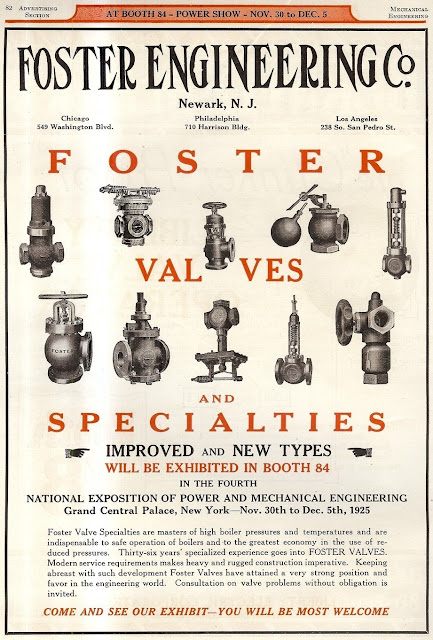 In 1893 Cash moved to Newark, New Jersey, to join the Foster Engineering Company, which had a sub-contract to work on the submarines. Cash designed a wide variety of pressure valves. With the unforgiving ocean as his testing “ground”, his valves needed to meet unprecedented levels of performance, reliability and dependability.
Cash worked for Foster until the late 1890s, briefly spending time in Worchester, Massachusetts, with the Compressed Air Power Company. In 1900 he set up business as an independent design engineer in Newark, continuing his work on valves. As well, he designed a wrapping and labelling machine, a hat packing machine, a power hacksaw and a clutch.

In 1913 Cash returned to Decatur to work for the H.Mueller Manufacturing Company, designing water pressure reducing valves and adding air and steam valves to the company's line. He founded his own company, A.W.Cash (Cashco Inc) in 1915, selling it to the Riley Stoker Corporation in 1934. Cashco also still exists, based in Ellsworth, Kansas.

For a man who had developed pressure valves for submarines and a unique typewriter, Cash spend five years, until 1921, on a most mundane project: a fly swat for the United States Wire Mat Company of Decatur. But with the establishment of the A.W.Cash Valve Manufacturing Company in 1919, he returned to the work for which he is now most famous. 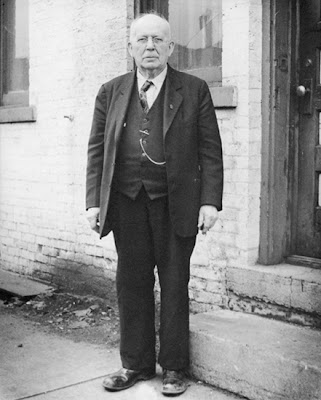 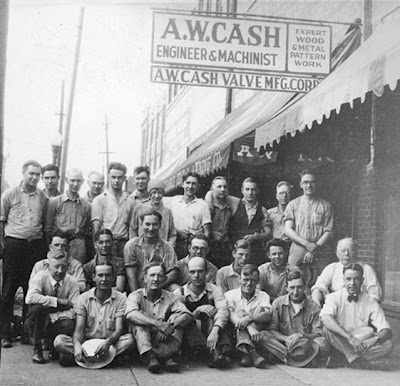 Cash died in Decatur on May 19, 1943. aged 83. At the time, he was the oldest living member of the American Society of Mechanical Engineering.
Cash Family images and information:
Julie Anne McMillian
Posted by Robert Messenger at 15:09

What an amazing looking machine! I has 'inventor' written all over it. It seems so raw and mechanical, that I find it charming. Thanks for this, I'd never heard of such a machine before.

Bob, this is such a great article! And thanks for giving me credit for the pictures. There is information in your article about Arthur that I have never read before, so thank you so much for that. Where did you get your information about this: "began his inventing career in a suitably ambitious way, just after his 23rd birthday, in 1882, with a “check-rower for corn-planters”, a design half-assigned to his one younger brother, Oscar. The following year he patented a paper-bag and twine holder." I know almost nothing about his younger brother Oscar and never knew that they ever collaborated on anything. Would love to know more. - Julie (McMillian)

Arthur Wise Cash was my great granduncle, the brother of my great maternal grandmother, Harriet Smith (Cash) Atteberry. Thank you for writing this article and putting "flesh" on this remarkable man.