On This Day in Typewriter History: Mark Twain Gets Ornery About Typewriters 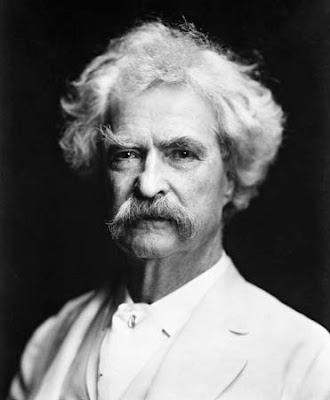 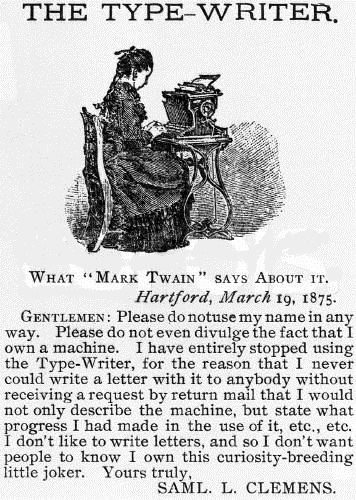 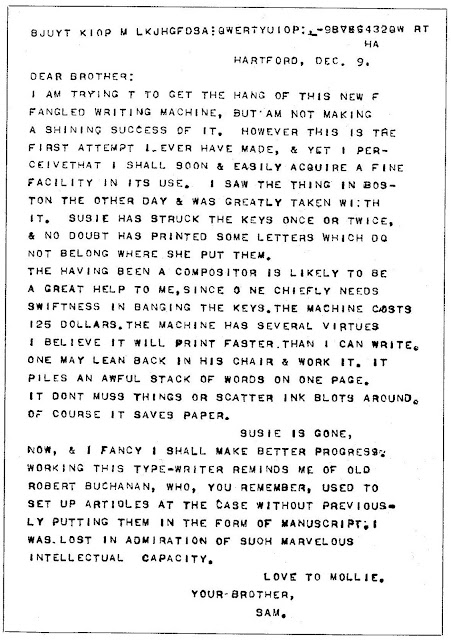 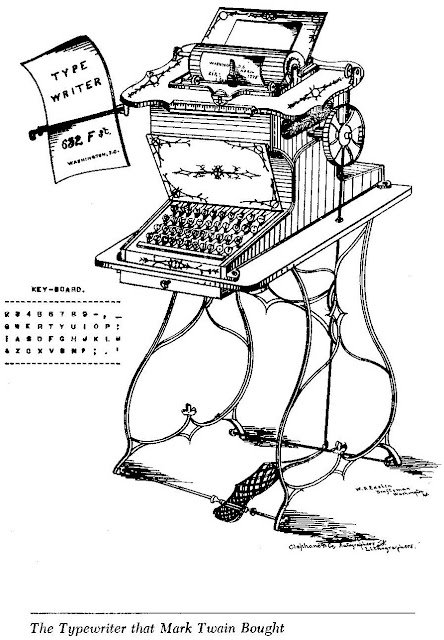 According to Bruce Bliven Jr's The Wonderful Writing Machine (1954)
On this day (November 5) in 1875, William Dean Howells wrote to Mark Twain:
The type-writer came Wednesday night [November 3], and is already beginning to have its effect on me. Of course it doesn't work: if I can persuade some of the letters to get up against the ribbon they won't get down again without digital assistance. The treadle refuses to have any part or parcel in the performance; and I don't know how to get the roller to turn with the paper. Nevertheless I have begun several letters to My d ar lemans, as it prefers to spell your respected name, and I don't despair yet of sending you something in its beautiful handwriting - after I've had a man out from the agent's to put it in order. It's fascinating in the meantime, and it wastes my time like an old friend. 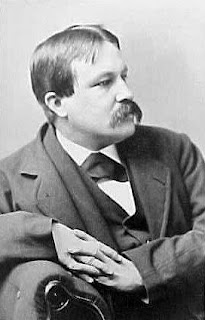 Howells
Howells (1837–1920) was an American realist author and literary critic. Nicknamed "The Dean of American Letters", he was particularly known for his tenure as editor of the Atlantic Monthly as well as his own prolific writings, including the Christmas story "Christmas Every Day" and the novel The Rise of Silas Lapham.
On the same day Howells wrote to Twain, Twain wrote (in part) to Elisha Bliss Jr, father of Frank Bliss, about the same said Sholes & Glidden typewriter Twain had bought in late 1874:

Friend Bliss:
Frank [Bliss] said he would send the infernal Type-Writer to Howells. I hope he won’t forget to afflict Howells with it.
Yrs
Clemens. 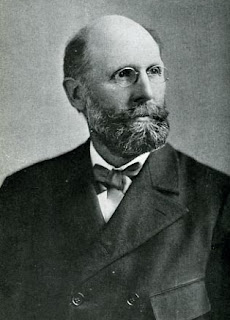 Francis Edward "Frank" Bliss (1843-1915) of the American Publishing Company arranged and published 23 volumes of the uniform edition of Twain's works.
Howells had received the typewriter from Frank Bliss about 4 ½ months after Twain had offered it, and almost a year after Twain had purchased it. Twain shortened this time frame in his later account of the machine’s peregrinations:
“That early Boston machine [Twain bought it in Boston] was full of caprices, full of defects - devilish ones. It had as many immoralities as the machine of to-day has virtues. After a month or two I found that it was degrading my character, so I thought I would give it to Howells. He was reluctant, for he was suspicious of novelties and unfriendly towards them, and he remains so to this day. But I persuaded him. He had great confidence in me, and I got him to believe things about the machine that I did not believe myself. He took it home to Boston, and my morals began to improve, but his have never recovered.
“He kept it three months, and then returned it to me. I gave it away twice after that, but it wouldn’t stay; it came back. Then I gave it to our coachman, Patrick McAleer, who was very grateful, because he did not know the animal, and thought I was trying to make him wiser and better. As soon as he got wiser and better he traded it to a heretic for a side-saddle which he could not use, and there my knowledge of its history ends.” 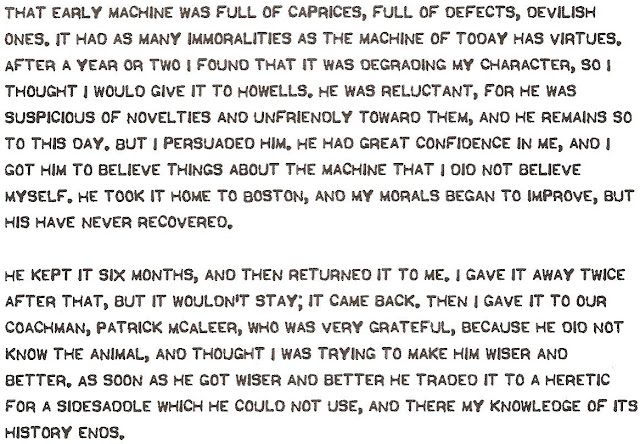 Typed using Richard Polt's Sholes & Glidden font
Here Bruce Bliven Jr entertainingly (as always) tells the story of how Twain came to buy the Sholes & Glidden. This is an except from Bliven’s 1954 book The Wonderful Writing Machine, commissioned by the Royal Typewriter Company to mark its 50th anniversary. Petroleum V.Nasby is, by the way, David Ross Locke (1833-1888). 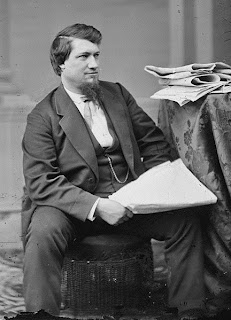 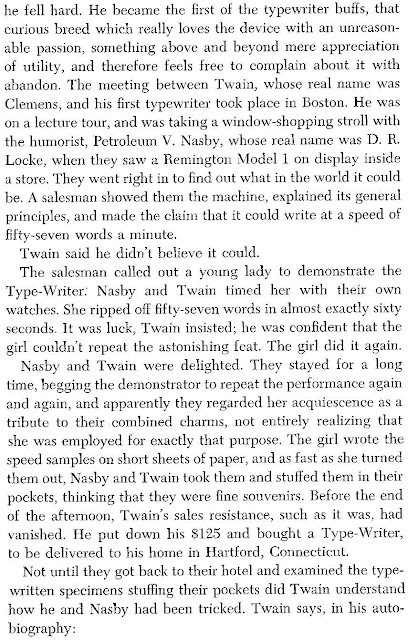 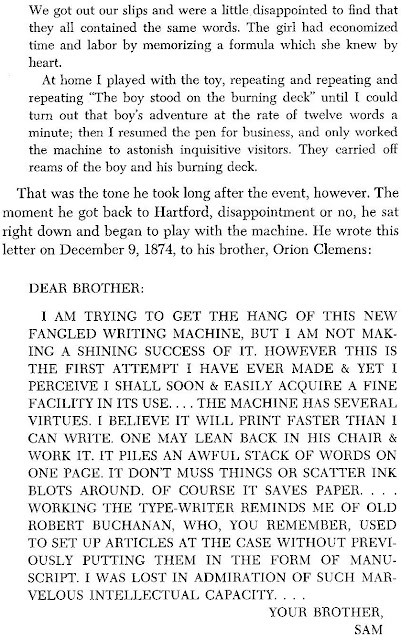 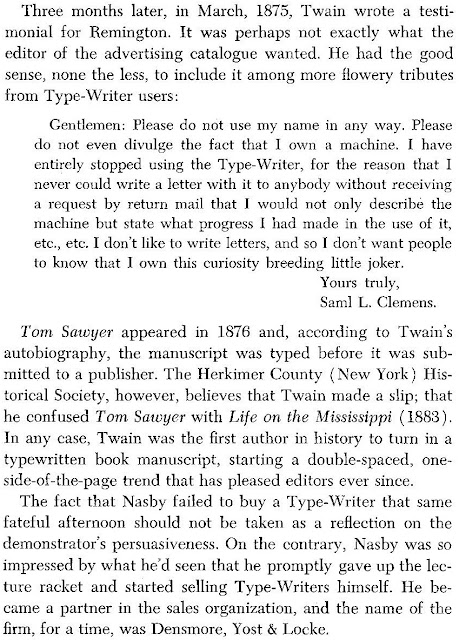 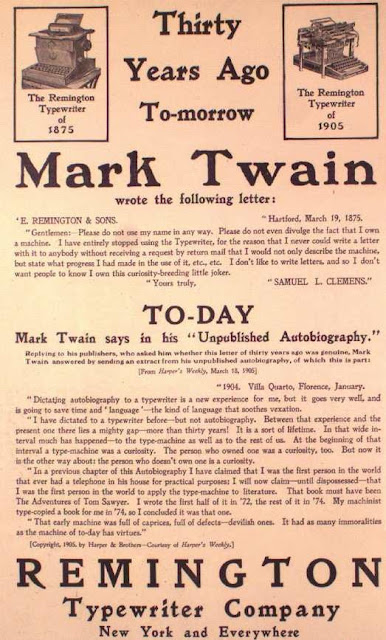 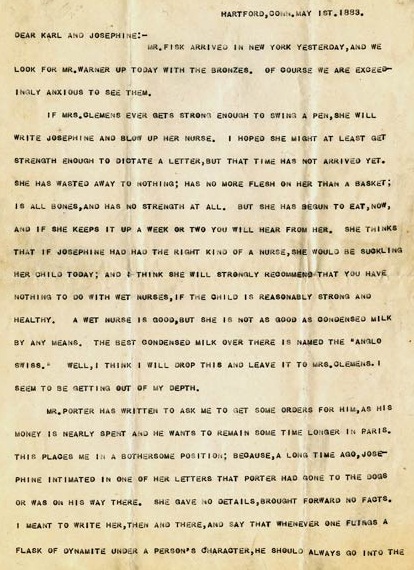 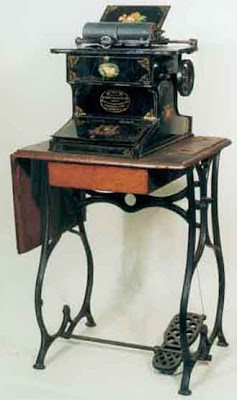 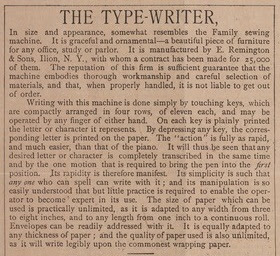 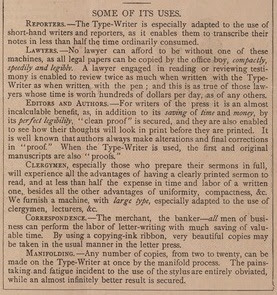 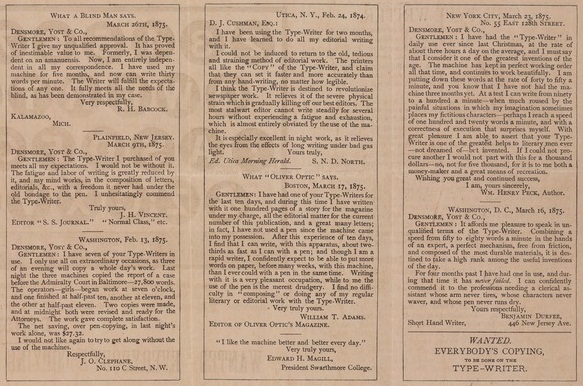 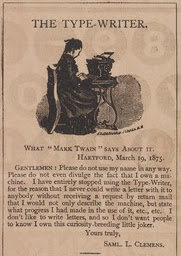 Posted by Robert Messenger at 10:52

The man could turn a phrase. "Curiosity-breeding little joker"
HA!

Quite interesting article. How was a pedal used on a typewriter?

Good question, Bill. I imagine to turn the platen? It seems to be attached to it?
Hi Peter. Yes, MT has some memorable lines all right. I found the anecdote about the guy setting type without copy to work from quite fascinating.