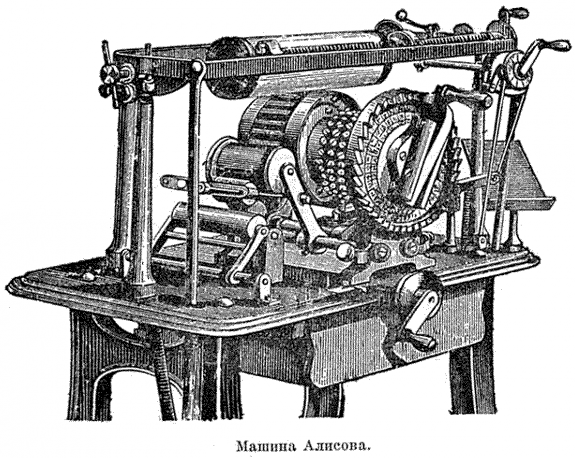 Two typewriters were described in a report on the 1876 Philadelphia Centennial Exhibition submitted to the British Education Department by one-time London Lord Mayor Sir Sydney Hedley Waterlow (1822-1906), a British Government executive commissioner at the exhibition. 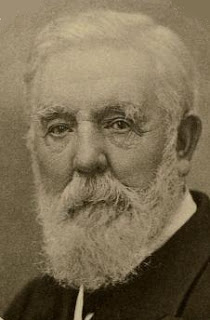 Sir Sydney Waterlow
The one typewriter which impressed Sir Sydney most was invented by a Russian, Mikhail Ivanovich Alisov, of St Petersburg. Those typewriter histories which do mention Alisov use the Anglicised version Michael Alissoff, the name which appears on a US typewriter patent issued on this day (November 9) in 1875 (it had been gazetted in England on October 14, 1874).

Alisov’s typewriter was shown by the Practical Technological Institute of St Petersburg in the Machinery Hall at the Philadelphia exhibition, in a section devoted to Russian machinery. 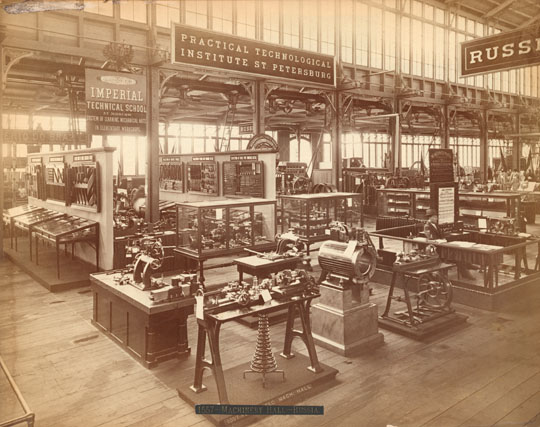 Sir Sydney, a “captain of [the printing] industry”,  was assigned to the Paper, Stationery, Printing and Book-making section of the exhibition, where he was one of seven judges, along with James M. Willcox, president of Glenn Mills, Philadelphia,  H. T. Brian, secretary of the Government Printing Office,  Washington; C. O. Chapin, Springfield, Massachusetts; William Faxon, Hartford, Connecticut; Edward Conley, Cincinnati, Ohio; and G. W. Seitz, from Switzerland.
Whether the two machines described by Sir Sydney were the only two typewriters on exhibition in Philadelphia remains uncertain. Waterlow, for example, makes no mention of John Jonathan Pratt’s Pterotype. 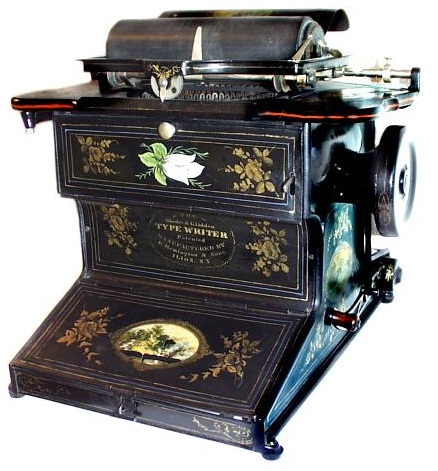 Nor does Waterlow refer by name to the Sholes & Glidden, which had gone into production at E.Remington & Sons in Ilion, New York, in 1874. But the second typewriter to which Waterlow refers was exhibited by “Bain (John W. Bain, 532 Walnut Street, Philadelphia)”. Bain was an agent for Locke, Yost & Bates, “formerly of 168 Elm Street, Cincinnati, now removed to Walnut Street, Philadelphia”.
Since this was the firm of David Ross Locke ("Petroleum V.Nasby"), George Washington Newton Yost and James H.Bates (later a hugely successful advertising agent in New York), the machine had “keys like a piano” and was being offered at $125, we can safely assume the "Bain typewriter" was the Sholes & Glidden.

However, Waterlow was unimpressed by it. It was, Waterlow wrote, “of the same pattern as those now very much in use in this country”.
What caught Waterlow’s eye was “one sent from Russia and never previously exhibited (Michael Alissoff, St Petersburg); this Russian machine was beautifully constructed, and although somewhat complicated possessed many writing machine advantages over the other one [the Sholes & Glidden], having nearly four times as many characters on the cylinder [240], and the work when finished being much more clear and elegant in its appearance, in fact much more like ordinary printing”. 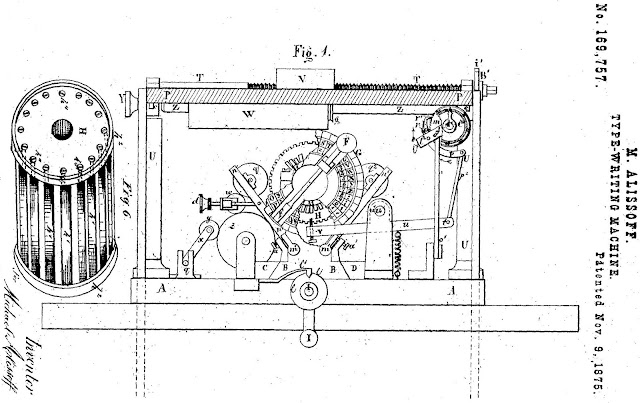 In its page on the Centennial Exhibition, the Early Office Museum has a quote about “The Mechanical Printer: M. Alissoff, a Russian inventor, exhibited an admirable type-writer, which excels all contrivances of its kind, in the variety of characters that can be used and in the neatness of the impression, and the mechanical adjustment, but does not admit of the rapidity of the American machines exhibited.” The museum suggests the Pratt's Pterotype and the Hansen Writing Ball may also have been shown in Philadelphia. 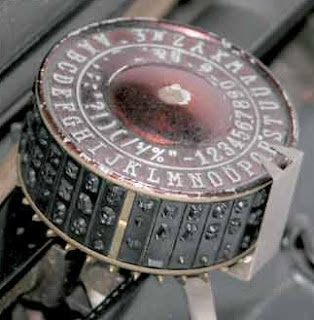 The museum also quotes from Michael Adler’s Antique Typewriters, one of the very few typewriter histories to mention the Alisov typewriter. Adler wrote, “A Russian inventor by this name designed and built a typewheel machine, patented in France in 1872 and in England two years later. An example was exhibited at the Philadelphia Exhibition in 1876, where it competed with the recently introduced Sholes and Glidden model made by Remington. It won this particular competition, receiving eloquent commendation in the official reports for the beauty of its construction and design, while the American machine, which was crude by comparison, was not even mentioned [Adler must here be referring to Waterlow’s report, but doesn’t say so].

Waterlow's report
“History can make judges look foolish and one can only assume that they were swayed by the superior quality of the construction, since the details of the design were somewhat clumsy and anachronistic. The letters of the alphabet, upper and lower case, were displayed on a circular index and selected by means of a handle attached to a typewheel. 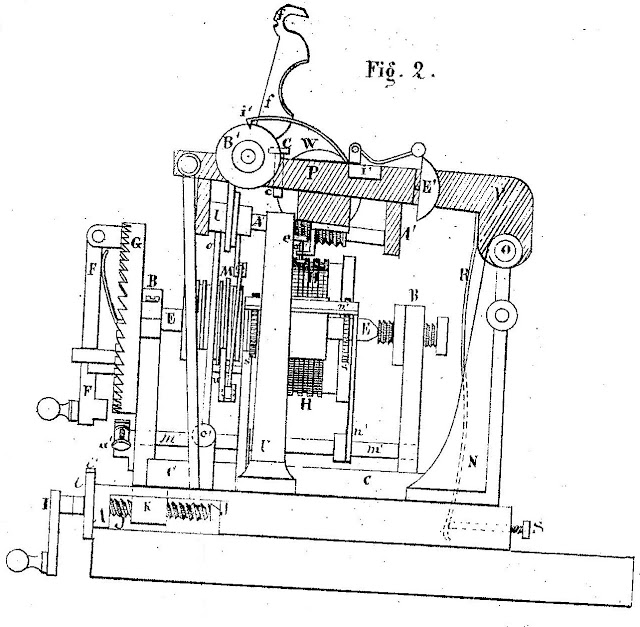 Alisov's patent
“Several alphabets, each on its own typewheel, could be mounted concentrically and the appropriate one selected by turning a handle attached to a worm at the bottom of the machine. Paper was fed around a cylindrical platen and lowered on to the type by means of a handle, inking by roller.”

Mikhail Ivanovich Alisov was born into “impoverished nobility” on May 30, 1830, in the village of Pankovo, outside Kursk, close to the Ukrainian border in south-west Russia. He studied physics and mathematics at the Kursk faculty of Kharkov University (now in the Ukraine).
Alisov called his simple yet ingenious machine the “Skoropechatnikom” – it simultaneously wrote and composed type. Alisov wrote that he had in mind replacing “the hard and thankless task of a copyist”. His machine was first shown in the 1873 Vienna World's Fair.

London Gazette, 1874
A Russian patent, No 1836, was issued on October 15, 1876, and the next year Alisov was able to raise the funds to manufacture his machine. But as it was officially designated a printing machine, he soon ran into problems under Russian censorship laws, framed to prevent revolutionaries easy access to publishing methods. Nonetheless, Alisov exhibited his typewriter at another World’s Fair, this time in Paris in 1878.

Alisov's coping pad
In order to avoid the censorship problem, Alisov turned his attention to a cheap but effective polygraph, a “coping pad” which he patented in Russia (No 2207) on July 2, 1879, and in the US the following year, assigned to English engineer Charles George Kleberg. (It is alleged by some Russian historians that Vincenz Kwaysser and Rudolf Husak, of Semil in Bohemia, Austria, “misappropriated” Alisov’s invention and patented it as “dry copying” in the US, assigned to a Charles Henry Green of London, in 1880.)
Alisov also patented in the US (in 1876) a process for preparing surfaces for printing music. It was gazetted in England on February 12, 1877. This was also exhibited in Philadelphia.
Alisov died in Yalta in Crimea in 1898, aged 68.
Posted by Robert Messenger at 13:10

I've been curious about this machine for a long time. Thanks!

What is that typewheel you show in a photo?

Hi Richard. Thanks. I should have known you'd ask about the typewheel. I was relying on Russian translations of text and captions, which aren't good, as you can imagine. The impression I got was that this from the Alisov machine, and allowed myself to think the gearing was similar. But it does look too small.

I actually have Kwaysser and Husak’s pantented dry copying tablet from 1880! I believe it’s a patent model? I’m not exactly sure. I’ve been trying to understand the history of this specific tablet for 5 days now lol