On This Day in Typewriter History: Restructuring the Oliver

PART 161
On this day (October 30) in 1906, two English-born mechanical engineers working in Woodstock, Illinois, for the Oliver Typewriter Company - Harry Cross and George James Griffiths - were issued with a patent for a complete restructuring of the Oliver. 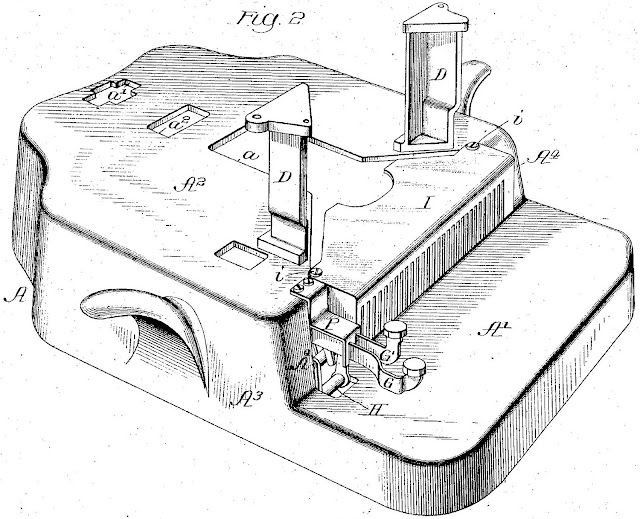 The Cross-Griffiths patent pays particular attention to the construction of the base-plate "and means for supporting or sustaining the several main operative parts of the machine on said base-plate".
It would seem to me, using as a guide Jett Morton's very thorough book The Oliver Typewriter Co: Machines and History (2011), that this redesign was for the Oliver No 5. Jett points out, "The major difference between the previous models and the No 5 is that the No 5 has a wider base and an enclosed cover."
It would also seem that this was the first major overhaul of the Oliver since Thomas Oliver's own redesign of March 1, 1898, to which Cross and Griffiths directly referred in their patent application specifications.
In turn, I would say Oliver's 1898 patent was the culmination of a series of  improvements made by the machine's original inventor, from 1894-95, leading to the Oliver No 2. The Oliver Typewriter Company had been established in 1895, with headquarters in Chicago, and the manufacturing of Olivers had moved to Woodstock in 1896.
Comparisons between Oliver's 1898 patent and the 1906 Cross-Griffiths patent can be seen below. 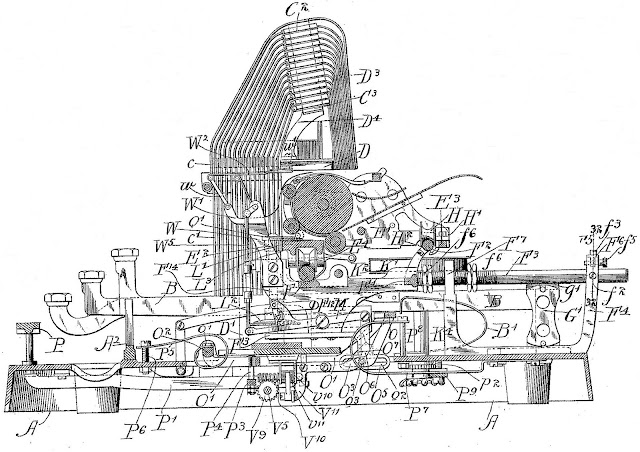 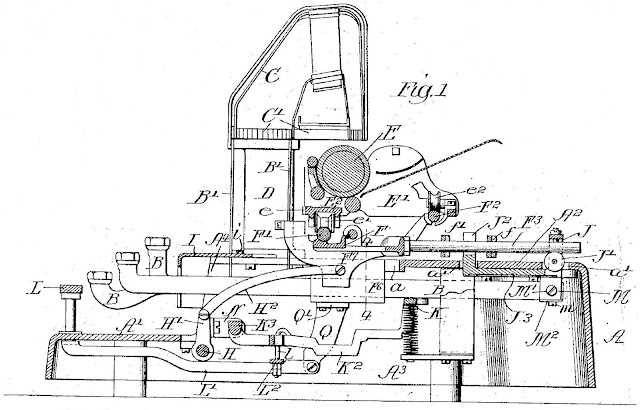 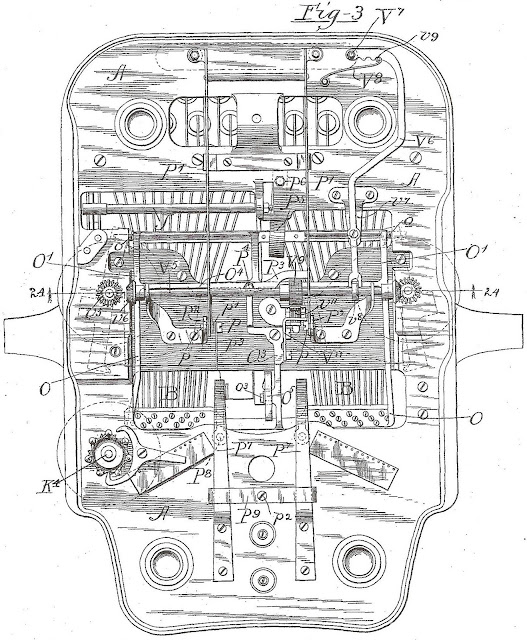 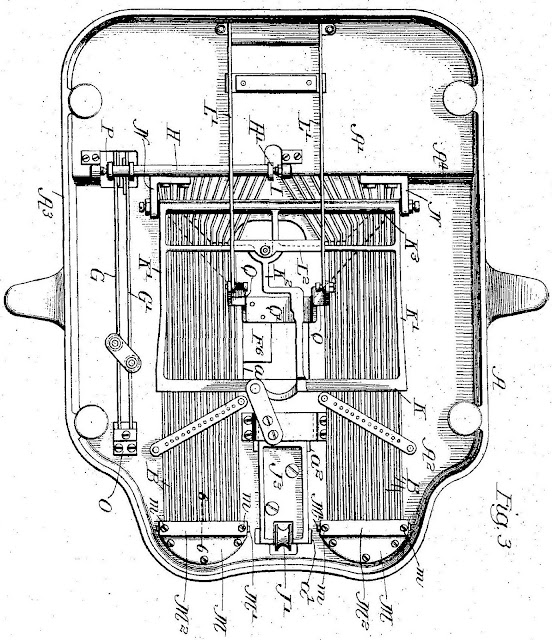 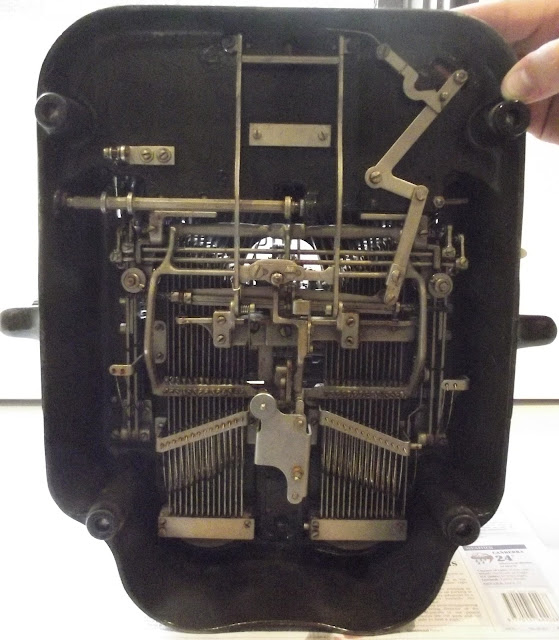 Underneath an Oliver No 5
It's interesting to note that when Oliver, based in Chicago, applied for his 1898 patent, on August 28, 1897, he assigned one-fourth of it to Frederick Augustus Eastman, a Woodstock machinist, possibly to offset the cost of Eastman's work on it. The Oliver No 2 was the first of the line made in Woodstock.
Harry Cross, who migrated to the US in 1885, and George Griffiths had arrived in Woodstock to work on typewriters in the mid-1890s, Griffiths moving from Chicago. Griffiths had been naturalised on January 18, 1893, and Cross was on August 24, 1896.
Cross was born in Birmingham, England, on February 23, 1863, and died in Woodstock on January 30, 1940, aged 78. Griffiths was born in London, England, on December 1, 1864, and died in Harvey, Illinois, on June 11, 1924, aged 59.
Two others heavily involved in the overhaul of the Oliver were draughtsman Theron Lucius Knapp (born Iowa, September 10, 1873; died Los Angeles, January 16, 1961, aged 87) and Clayton Christian Harting (born Illinois, December 8, 1873; died Woodstock, August 21, 1918, aged 44).  Harting had succeeded Cross as foreman of the Oliver works before dying at a young age. Cross went to to simply describe himself as an "inventor - typewriter factory". 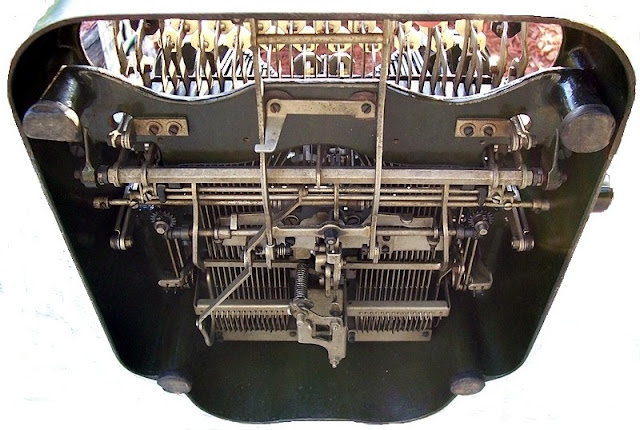 Underneath an Oliver No 9 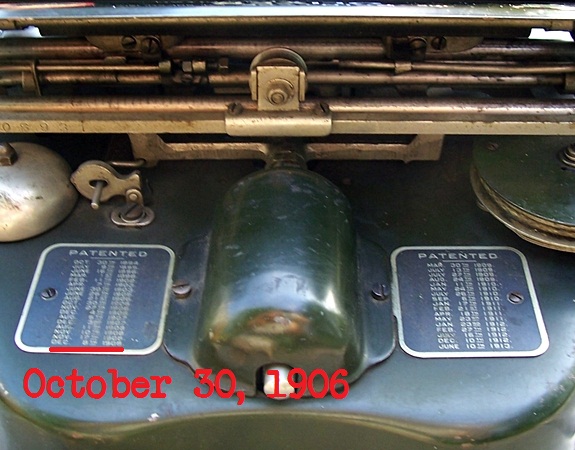 Posted by Robert Messenger at 13:53

Robert! You can't imagine my delight at finding your new article dedicated to the world's best portable three bank type writer! I'm amazed at how you can dig up this information. But I just remembered you are a journalist, so you've mastered the techniques!!

Another one of your great posts Robert. I do not know how I missed it when you posted it. Found it looking for information on my recently acquired Olivers, a No. 5 and a No. 9.