Typewriting in Hebrew: So Easy a Bambino Can Do It 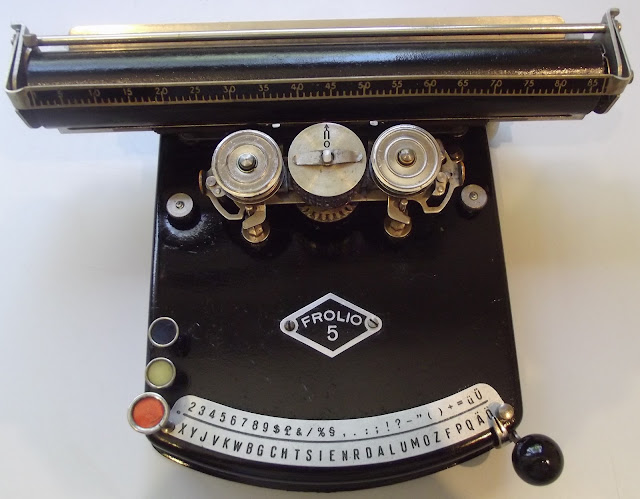 My, how things move quickly in the Typosphere. An innocuous post, a kindly pointer to an intriguing story, and there, lo and behold, a blast from the distant past, all in quick turn. 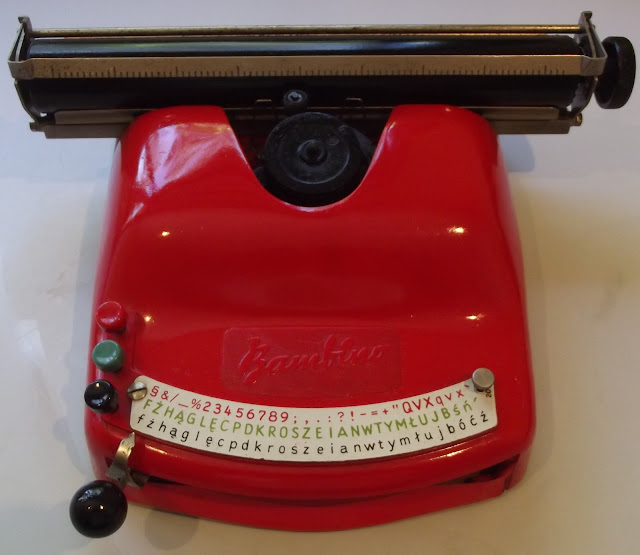 To begin at the beginning: I made a short post last night on new additions to the shelf, thinking it was fairly inconsequential. But my mention in it of the Frolio 5, in relation to the Bambino which had arrived from Israel, led Richard Polt to a comment which pointed me in the direction of a rather strange little story that had appeared last month in the Tel Aviv newspaper Haaretz. 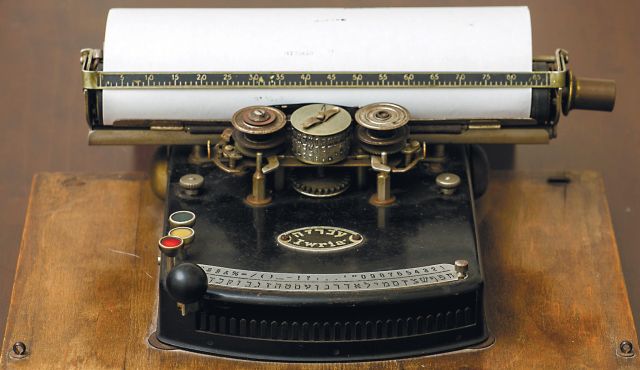 But first let me explain about the Bambino. It was made by Optima in Erfurt in 1954, based squarely (if not fairly) on a then 30-year-old German patent for what we most commonly know as the Frolio 5. It is, in truth, little more than a Bakelite toy, a mere plaything.
When I read the Haaretz article, my first thought was: “Oh, oh, it’s the Mumbai ‘Last Typewriter in the World’ furphy all over again." Except this one was suggesting a first typewriter – that is, a first to type in Hebrew. The machine is called an Ivriya, but it’s actually a Frolio 5. And it is most certainly not the first to type in Hebrew.

George Blickensderfer's keytop design
for the 1907 Blickensderfer Oriental
As this Tel Aviv story was published three weeks ago, I am probably (as usual lately) way behind on it. But as Richard suggested I would, I nonetheless found the piece somewhat amusing, as I do know a bit about the history of the Frolio 5. 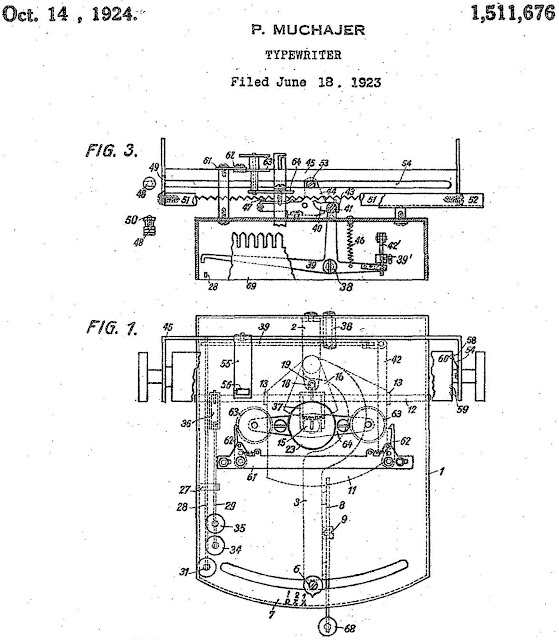 The Gundka Frolio 5 was made by Gundka (Greppert & Chalice) Werk GmbH in Brandenburg Havel. It was designed in 1923 by one of Germany’s leading typewriter inventors, Paul Muchajer, of Charlottenburg, Berlin, who assigned half of his US patent rights to Gundka. 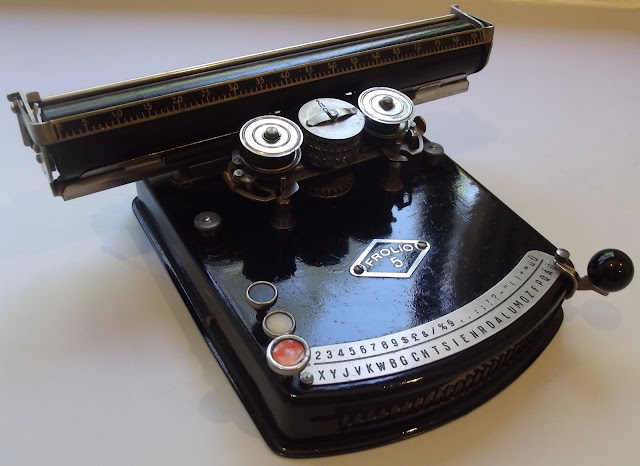 Nowhere in Muchajer’s patent specifications is the Frolio’s ability to type in Hebrew, or any other language, mentioned.
Nevertheless, as with any typewheel, typesleeve or typeshuttle typewriter, the ability to type in Hebrew would have been an absolute gimme – provided the movement of the carriage was reversed.  Indeed, it would have been much easier on a small index typewriter such as the Frolio, since the plate with Hebrew characters could be simply screwed into place and an appropriate typewheel attached to make a Hebrew language model. 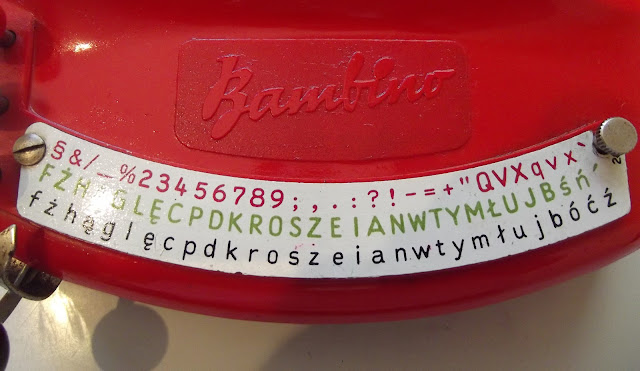 But keyboard typewriter makers were alert to the need for Hebrew language machines way before Muchajer designed the Frolio. In 1914, Burnham Coos Stickney suggested Underwood link two typewriters together, each with different language keyboards and typeslugs but sharing one carriage moving in different directions. That seemed a bit elaborate, and Elbert Stearns Dodge in 1921 simply reversed the direction of the Remington carriage to enable typing in Hebrew. 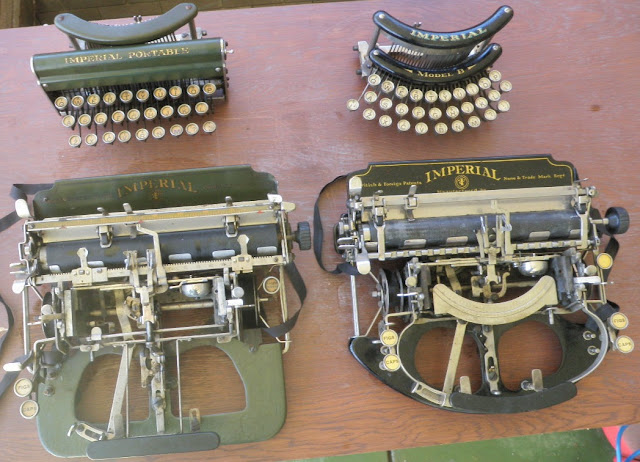 A much better idea, however, came from across the Atlantic, from an American in Leicester, England: Hidalgo Moya. The man behind Imperial, Moya had earlier preferred typesleeves, but in 1908 came up with a design in which the keyboard and typebasket could be easily removed as one integrated unit, to be replaced for different languages. For Hebrew, all that left was to switch the carriage movement - easily done, by moving the mainspring from the left to the right. Moya wrote:
"The upper frame carrying the key lever and typebar system may be entirely detachable from the rest of the machine so that type sets for different languages may be substituted on the same machine together with a keyboard suitable for the language.”
A year ahead of Moya on this last count was George Canfield Blickensderfer, who in 1907 designed the Blickensderfer Oriental, on which the carriage could move in both directions. Since Blicks had no drawbands, this was a relatively easy task for George C. 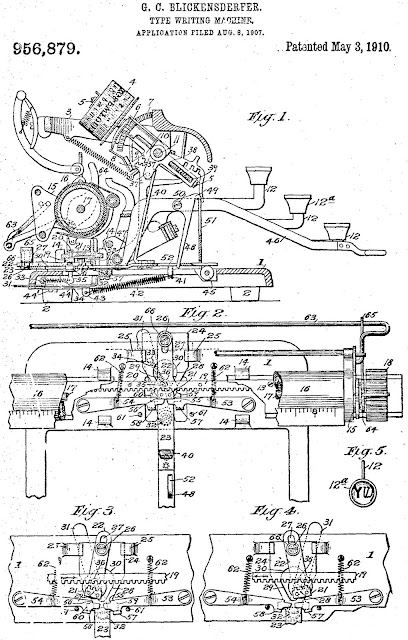 Blickensderfer wrote,
“Typewriting machines. as most usually constructed, are arranged to print the characters from left to right. In certain languages, however, such, for instance, as Hebrew. the characters must be printed from right to left, and typewriting machines for the printing of these languages must, therefore, either be specially constructed, so that the step-by-step feed may be the reverse of that usually employed, or must be so constructed that the carriage may be operated to feed in either direction.
“The present invention has for its object to produce an improved typewriting machine, in which the step-by-step feed of the carriage may be effected either from left to right or right in left, as desired, so that it may be adapted for printing in languages the character of which are written in opposite directions.” 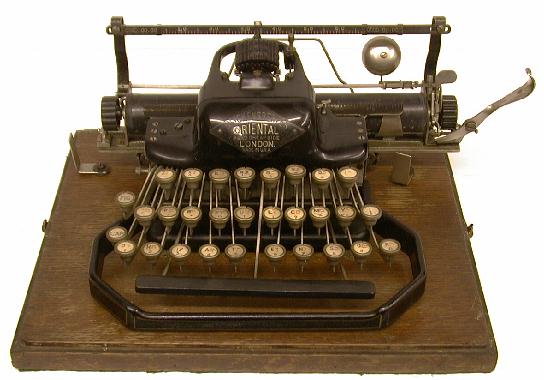 In 1911, an English engineer, Richard Ambrose Spurgin, came up with a similar mechanism, but this time using a drawband, for the Hammond. Spurgin (born Tottenham, London, 1874), wrote:
“The Hammond typewriter by reason of the detachable shuttle renders its use applicable to many different users, and especially to different languages, since a Hammond typewriter may be used in different languages which employ different types by the mere substitution of a shuttle having type thereon adapted to the use of the particular language. In the use of the Hebrew and those languages that require the operation of the machine in a manner reverse to that of our language, great difficulty has been occasioned in adapting a typewriter used for, let us say, the English language to its use for, let us say, the Hebrew. The object of this invention is to provide a reversible carriage for a Hammond typewriter by the application of which to the Hammond typewriter the machine may be used equally well for the English language as for the Hebrew, and whereby it may be operated in the reverse direction to which it was first operated.” 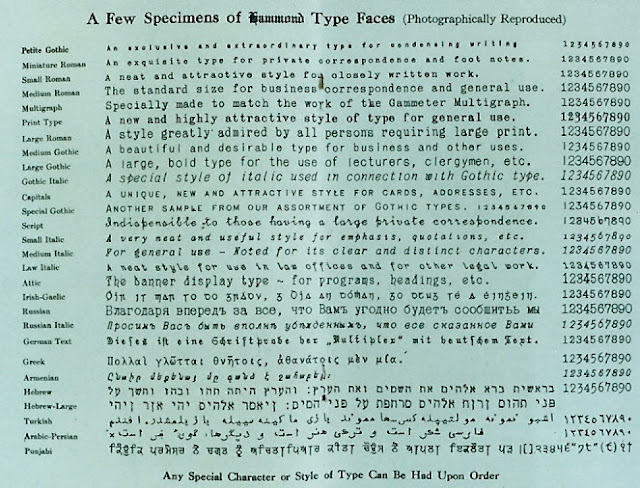 Hammond, from its earliest days in the 1880s, and Blickensderfer, from 1893, had both been aware of the possibilities presented by their use of typeshuttles and typewheels, and had offered a wide variety of fonts and languages, including Hebrew. 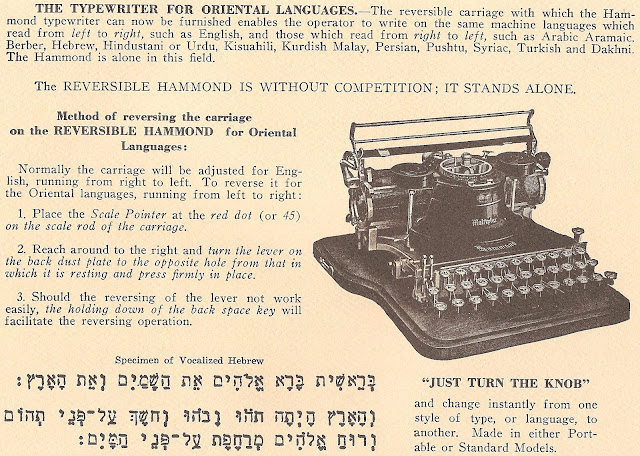 But possibly the first typewriter inventor to give this need some thought was another Englishman, Frederick Nesfield Cookson, of Wolverhampton, who in 1885 designed what Michael Adler described as “a most attractive type plunger machine”. All of which means Hebrew language typewriters were thought of at least 40 years before the Frolio, or the Ivriya for that matter, came along in 1924. 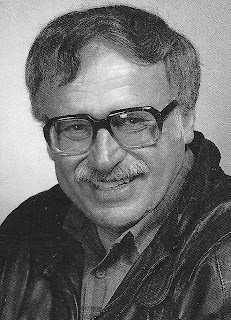 Speaking of Mr Adler, the famous typewriter historian is alive, well (presumably) and kicking! Can you believe it, but one of two comments on the Haaretz story came from Adler himself? I wasn’t even sure he was still alive, but clearly he is – somewhere – and still taking an interest in typewriter “news”. 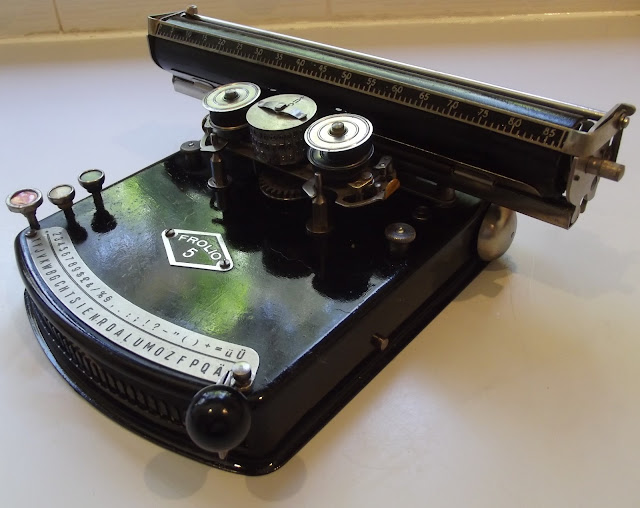 Adler’s comment: “Origins of the Ivriya are not at all unclear. The machine is a Hebrew version of a popular German machine manufactured by Gundka-Werk GmbH from 1924 which was called GUNDKA, marketed later under a multitude of names worldwide (G&K, Write Easy, Frolio, etc, etc.) See either of my books The Writing Machine or Typewriters from Creed to QWERTY.”
Of course, much later, Hebrew language specific typewriters were made. such as this Hermes 2000. Please note the direction of the carriage.
Here is a scan from my Hebrew keyboard Hermes 2000 - one of these days I'll get around to putting it all back together again! 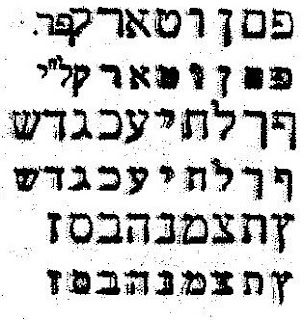 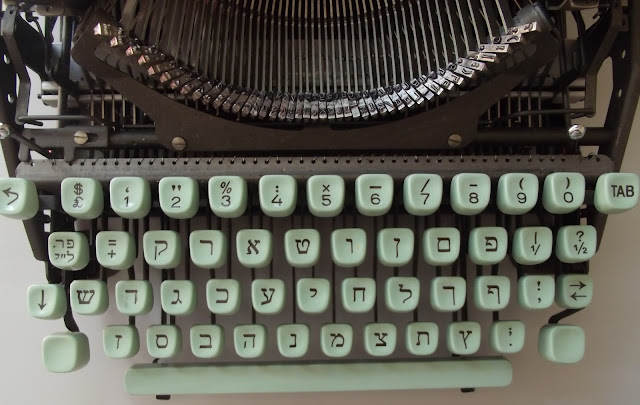 Posted by Robert Messenger at 20:47

Great job, Robert. Leave it to you to shed a lot of historical light on the Ivriya and its predecessors!

Wow! You sure have a great post here. Thanks for the great history lesson.

I found that Hebrew Hermes of yours fascinating when I saw it. Sounds like you have more interesting machines still!

I am immensely happy to hear that Mr. Adler is somewhere out there. Hopefully he gets in touch with the typosphere.

Thanks for the excellent post, of course. Your Bambino seems to be Polish?

Thank you Richard, Bill, Scott and Georg for your very kind words. Yes, I agree Georg, it would be good to be able to flush Mr Adler out from wherever he is, and into the Typosphere! But I don't fancy our chances after all this time.
Thanks especially for the tip-off about the Bambino's keyboard. I couldn't work it out. I kept trying to type "l" as in "Hullo" and kept getting a "p"?