On This Day in Typewriter History: Single Type Elements Galore

Single type element typewriters were all the rage on this day (November 20) in 1888. The only three typewriter patents issued on that day all related to such machines.

Franz X.Wagner
One was the work of a man who would later make the typewheel and typeshuttle virtually obsolete: Franz Xaver Wagner, who in 1893 mastered fully visible typing. The single element survived, of course, most notably in the Hammond and its successor, the Vari-Typer, as well as the Blickensderfer. But the advent of the Wagner-Underwood frontstrike mechanism made the use of single type elements to achieve the goal of visible typing much less of an imperative. Remington eventually followed Underwood’s lead and these two brands came to dominate the market. 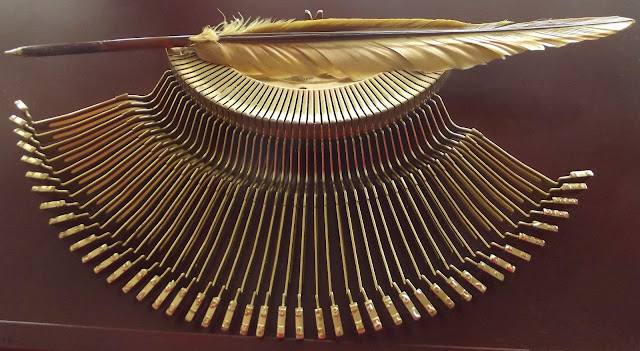 For a whole range of reasons – among them visible writing, making much more compact machines without typebars, easy adaptability for different fonts and languages and avoiding patent infringements – single type element typewriters appealed greatly to typewriter inventors in the 1880s and 90s. 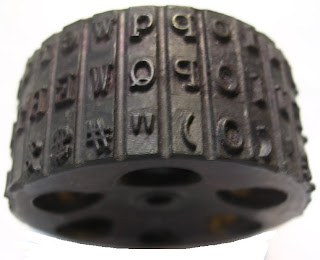 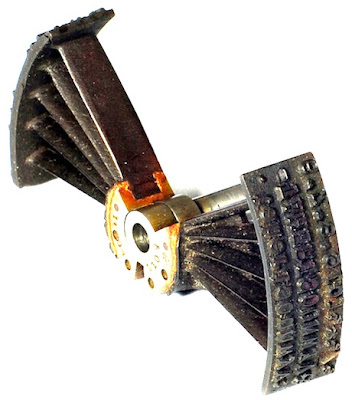 But with the demise of the Blick, and Hammond’s struggle to compete, the single type element almost became antiquated. Hence all the fuss, and the false claims of a “revolution”, when in 1961 IBM reinvented the (type) wheel and reintroduced a single element: the golfball. 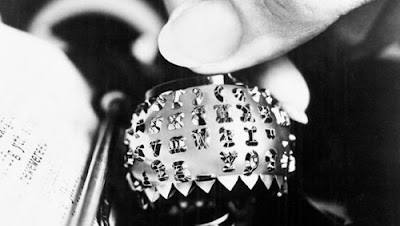 Interestingly enough, when Horace Smart “Bud” Beattie (1909-1993) applied for a patent in 1948 for the “high speed printing mechanism” which would grow into the golfball, in the first instance he referenced another single type element patent, one issued on this day in 1888 (so much for the “revolution”).

A 'flying walnut'?
If I use the analogy that an 1888 design was like a walnut squirrelled away, to lay dormant for 60 years, I do so for a reason: IBM’s first name for the golfball was the rather more appealing “flying walnut”.

'Bud' Beattie
But Beattie, John E.Hickerson and the IBM team developing the golfball at Kenyon House in Poughkeepsie in the early 1950s also referred to the typehead as the “mushroom printer”, with good reason.  It looked exactly like a mushroom when it was first designed in 1888, and was identical when Beattie brought it back to life in 1948. Even IBM later acknowledged it was an “umbrella-shaped development model …” 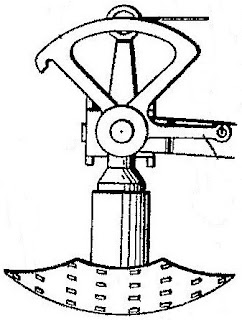 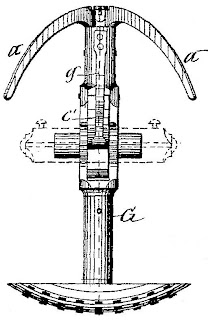 Perry's 1888 'mushroom' device
The inventor of this convex “mushroom” or “umbrella” single type element was Charles Hire Perry, who was born in Woodstock, Vermont, on June 25, 1844. This entry on Dr Perry in a book about the Democrats of New York State tells much of his remarkable if little known life story: 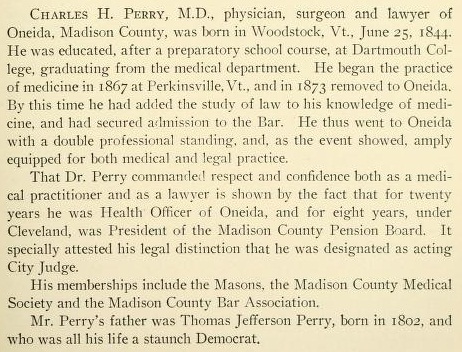 Perry attended the Green Mountain Liberal Institute (nowadays the Green Mountain Perkins Academy) in Woodstock. He graduated from Dartmouth Medical School in Hanover in 1867, the year he began practising.
Apparently his preferred medicine was allopath: Allopathic medicine is now an expression commonly used by homeopaths and proponents of other forms of alternative medicine to refer to mainstream medical use of pharmacologically active agents or physical interventions to treat or suppress symptoms or pathophysiologic processes of diseases or conditions. 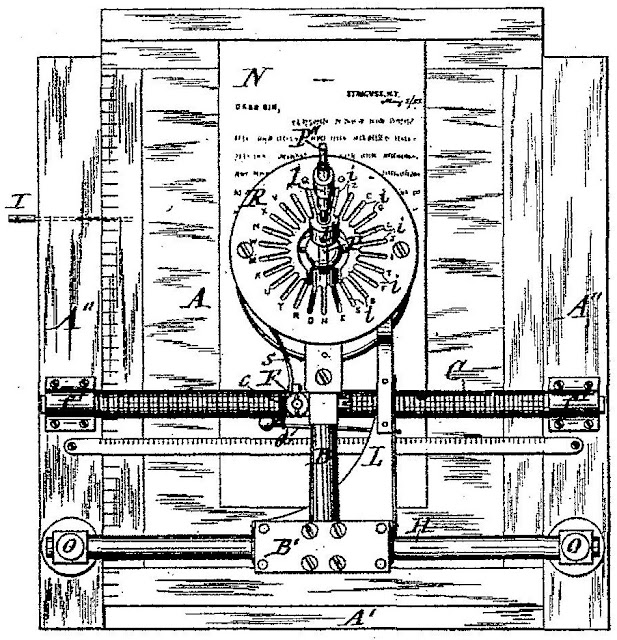 Perry's 1888 typewriter, above and below 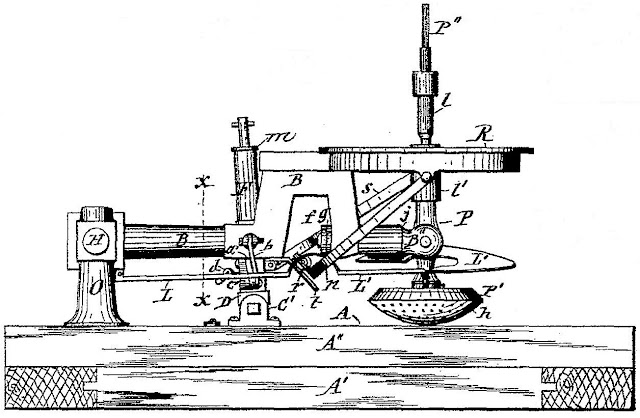 Perry took out two typewriter patents, in 1888 and 1890, as well as one in 1889 for the manufacture of type plates. The second typewriter patent, an extension of the first, showed a machine that was almost like a writing ball. 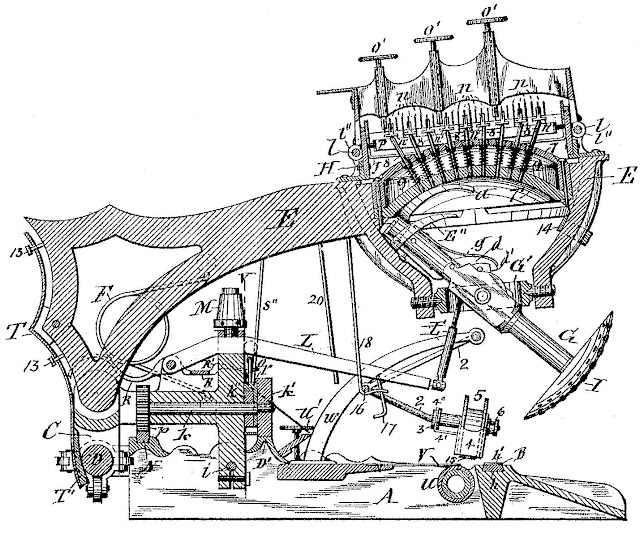 Perry's 1890 improved typewriter
This, and the type plates patent, were assigned to Thomas Redfield Proctor (1844-1920), a wealthy Utica, New York, hotelier, banker and businessman who backed some of Perry’s enterprises. Born in Proctorsville, Vermont, Proctor was one of the New York commissioners for the World's Fair at Paris in 1900. He has been described as “perhaps Utica’s greater benefactor”. 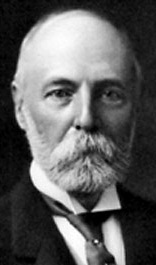 Thomas R.Proctor
Given Perry and his father, Thomas Jefferson Perry, were staunch Democrats, it is interesting that his backer was a noted Republican (Proctor was a delegate to the Republican Party’s national conventions of 1908, 1916 and 1920). Obviously political ideology didn’t enter into it when typewriters were on the agenda. 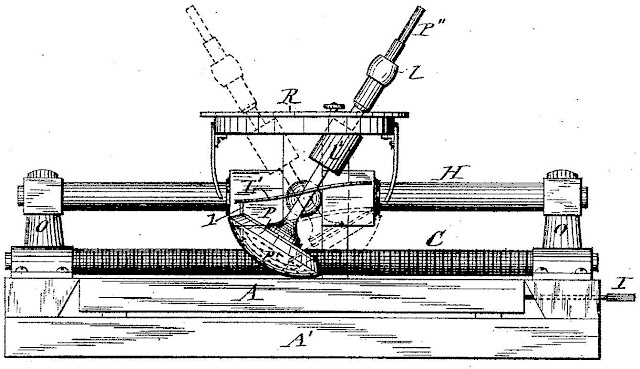 Proctor gave the land for the Utica Public Library and gave the library a collection of letters written by all of the Presidents of the United States and a bronze tablet containing Lincoln's Gettysburg address.
Perry died in Oneida on December 16, 1921, aged 77. 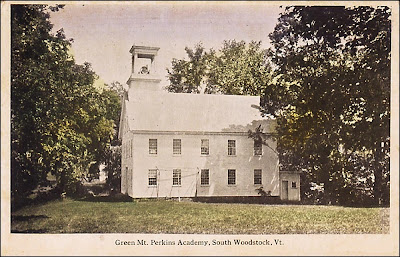 One of the small delights of this sort of research work is getting in touch with somebody who seems to care. I was able to contact the president of the board of trustees of Perry’s first school, Green Mountain, who was excited to hear about the deeds of one of the school's earliest pupils. 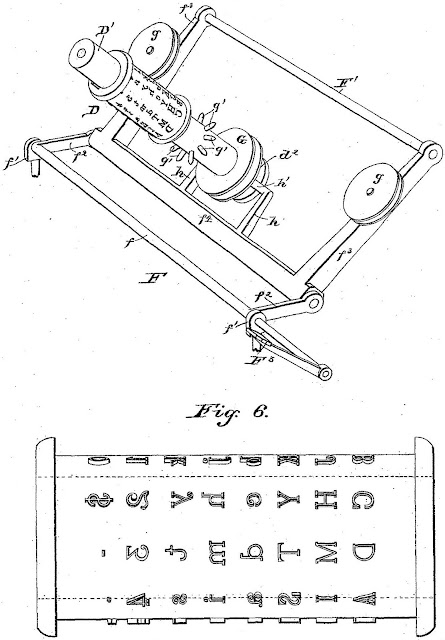 The second single type element typewriter patent we are looking at today was issued to James William Chrysty, of Pataskala, Ohio. Chrysty was born in Liberty, quite close to where Richard Polt now lives in Cincinnati, Ohio, on November 29, 1851. After working on his father’s farm, Chrysty became a school teacher in Hamilton, Ohio. He died in Houston, Texas, where his son was a builder, on February 7, 1898, aged just 46. Not surprisingly, his surname was often misspelt Christie or Christy. 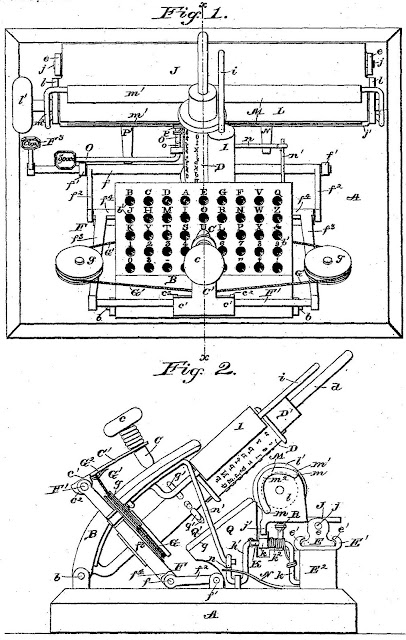 Chrysty’s index machine looks to have elements of the earlier Hall (character pad and indicator-plunger) but uses a typesleeve and looks quite compact. I think it would have been a very nice little typewriter, if it had ever been made.
Finally, back to Wagner, whose 1888 design also appears to be compact, and to incorporate a typeshuttle or large typewheel.

Wagner seemed quite determined at this stage of his career to build a single type element machine, and is here returning to an earlier idea, expanding on it.
This was Wagner’s fifth typewriter patent. He had earlier worked for George Washington Newton Yōst and the Type-Writer Company, employing a (in this case unacceptable) typeshuttle for the Caligraph, and hung on to the single type element idea for an 1883 patent assigned to a group of gentleman called William F.Miller, Louis C.Fuller and Edward P.Hamilton. It was for a machine that looked like the Hamilton Automatic of a much later period, except of course the Hamilton is an understroke typebar machine.

But by the time Wagner designed the National for Henry Harmon Unz and Stephen Terhune Smith Sr, in 1885, it seemed he had been won over to typebars, leaving the next stage of the single type element, keyboard typewriter advance to George Canfield Blickensderfer. Wagner continued along the typebar path while working for Amos and Emmett Densmore, yet this 1888 evidence suggests he was still loathe to put aside a single type element typewriter.

Posted by Robert Messenger at 10:02

This is very interesting stuff.

The Perry contraptions remind me of the Lambert a bit.

Thank you Richard, very kind. The story goes that Beattie got the idea which led to the golfball from screwing in a light bulb (which obviously lit up in his thought balloon). If it is true, he must have quickly found in patent searches that someone had already been there, done that, 60 years earlier.