Following the form with typewriter sales on Australian eBay is as perplexing as trying to pick a winner in the Spring Racing Carnival in Melbourne. We've had the usual round of fun and games, with a few "What the ...!" deals mixed in with some really healthy prices. 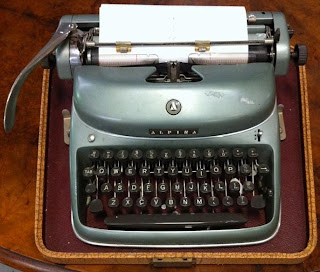 The bad news is that Norbert Schwarz and Will Davis's Alpina (or is it an Apina?) is still sitting on $55 without a single bidder so far, and less than four days to go. At $55, an Alpina, whether made by Norbert and Will or not, is exceptionally good value. I may even bid on it myself, if it stays at that price. Imagine owning a typewriter that was crafted by the hands of Will Davis?
What no typewriter maker or seller has previously thought of is a "typewriter-and-lamp set". Yes, folks, that's what's an offer on Australian eBay right now. 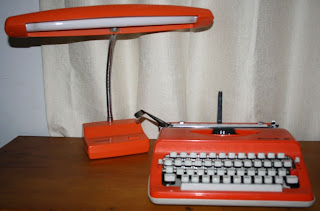 The typewriter is a Chevron and the lamp is by Hanimex, but so what? They're both Japanese, both re-branded for the Australian market, both made of plastic, and both bright orange ... They match! So far there are no takers at $50. The catch here may be that postage is $60, since the items have to be send separately. 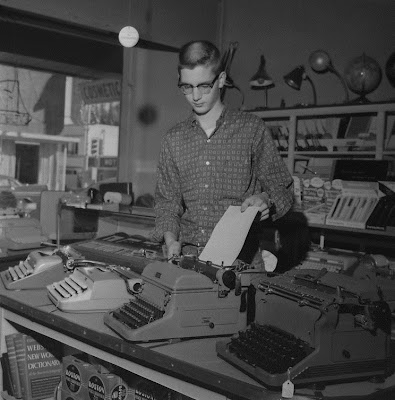 When this dual item popped up on eBay, it sort of explained another eBay typewriter-related listing I'd been watching - a press image of a Buddy Holly lookalike in a store in south-east Kansas in 1960 (by which time, of course, the music had died and young Buddy had left us). Take a close look: there are the lamps up back to match the Royal Futura, Smith-Corona and Royal and Underwood standards on the counter. Presumably the colours tie in, but it's hard to tell in black-and-white. 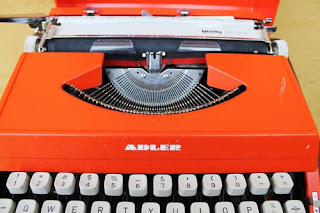 Orange remains huge in Australia: This Nakajima, labelled an Adler, was so "funky" it fetched $104.50. You read that right: $104.50 for a Nakajima! Will wonders never cease?
I've said it before and I'm certain I will be forced to say it again - one has to hand it to those o-so-funky people in South Australia. This time they've managed to convince someone that a "funky atomic" Robotron is worth $134.50. In the case of a Robotron typewriter, "atomic" is probably closer to the truth than usual. But this was a plastic Erika Daro with a Hungarian keyboard, which attracted a remarkable 18 bids. 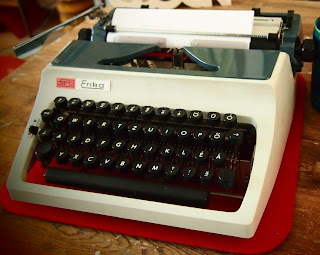 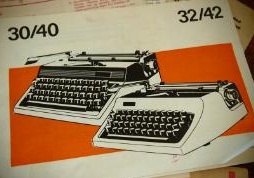 Meanwhile, another Robotron, this time labelled a Pinnock and not listed as "funky" or "atomic", got just one bid and sold for $19.99. Go figure. I can't. In fact, if I had to hand over some of my own hard-earned for a Robotron, I think I'd prefer the Pinnock. 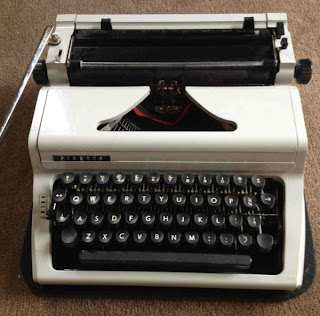 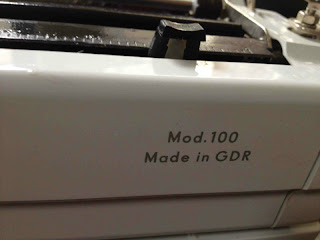 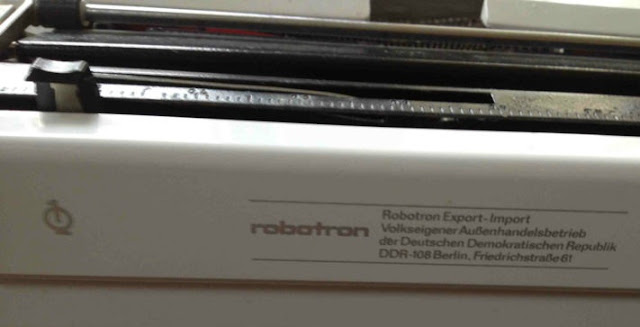 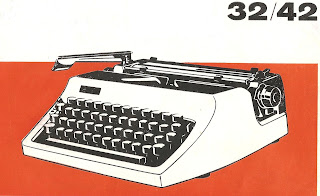 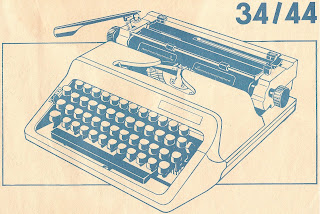 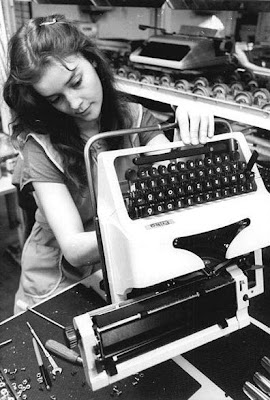 Pinnock was one of the brand names used by Currie Furniture Manufacturing (CFM) for the distribution of Japanese and East European typewriters in Australia. The other was Craftamatic. Pinnock or Craftamatic could mean anything on a typewriter in this country: Nakajima, Silver-Seiko, Antares, Robotron - here are just a few samples, all labelled as the Craftamatic Mark I: 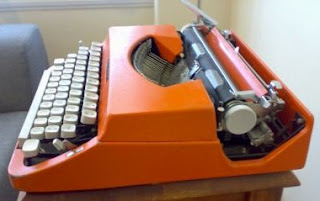 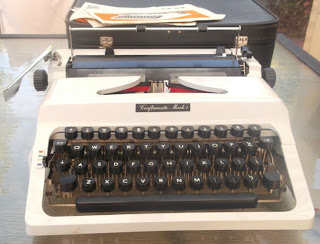 This last Craftamatic, yet another Robotron (note the familiar manual in the background),  has so far attracted only one bid at $25, which again seems value for money - $25 yes, $134? Umm ...
Will Davis commented after my post this week about the Norbert-Will Alpina listing that an eBay seller in the US had "plucked the content from my Davis Typewriter Works post on the Monarch right off the page and stuck it in the auction". I've had a similar experience with this orange Olympia Monica. 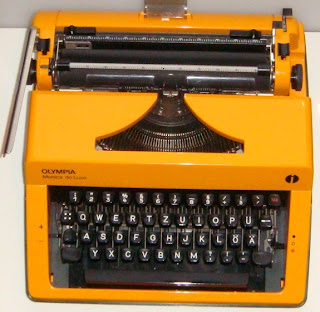 The seller, a local, has used my post on typewriters for the exhibition, which included an
Olympia Werke-made Monica designed by Anton Demmel, to try to sell (for $199.99!) a plastic one not designed by Demmel and made in China.
The seller uses my quote to claim, "The Monica is based on the Olympia SM5 (Olympias made at the company’s new West German factory between 1951-66 are consistently ranked among the finest typing machines made at any time, anywhere)." But the machine this person is selling was made in 1996, belongs to the Chinese Rover family, and is most decidedly NOT among the finest typing machines ever.
See here some closely related typewriters - given they have so many names, they are literally no-name machines: 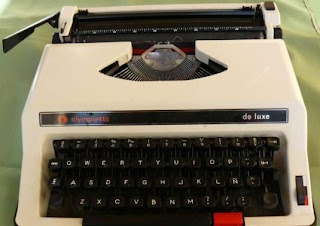 Speaking of which, I spotted this Rapide come up for sale, I think in the US. It is surely an IMC Engadine, which belongs to the same Chinese family. 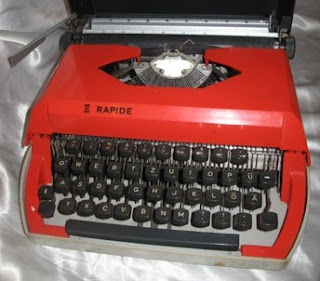 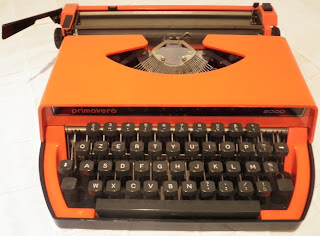 My IMC, bought out of sheer curiosity
Yet another member of this family is a machine which I own as both an Antares and an Underwood. Here it is, as recently offered on Australian eBay, as - yes, you guessed it - a Craftamatic Mark I!: 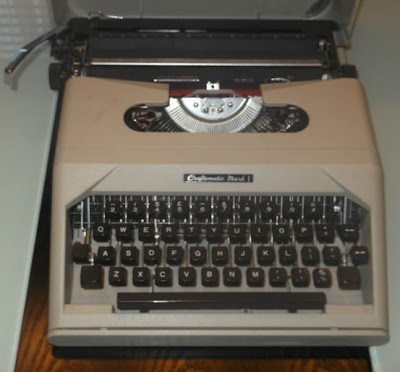 What I would call a real Monica-style Olympia sold for a worthy $110 after 22 bids. 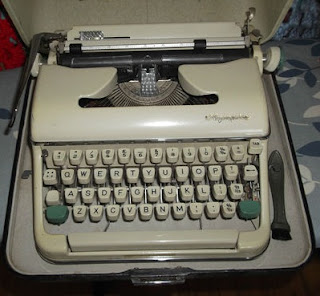 Bidding patterns leave me bemused. Derrick Brown listed a Blick 7 with a starting price of $80. It was a seven-day listing, yet within 12 1/2 hours the price had soared to $200. Then over the next week it rose by only another $56. I don't get it. 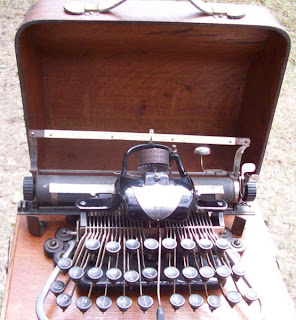 Derrick sold a really gorgeous Monarch 5 for $425 and earlier the same model, in its more common form as a Remington 5, for $275. 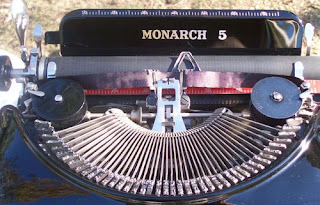 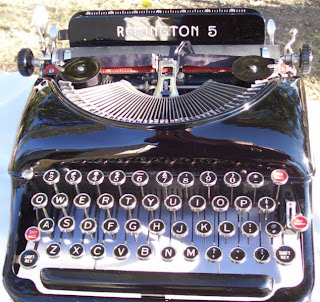 The Blick listing was quite mystifying, as the machine was dated to the 1920s (none of this style of Blick was made after 1919) and the claim was made that QWERTY came after the "scientific" keyboard configuration. "There was a lot of conjecture which style was the better and the QWERTY design won out." It was sold as a static display because the inking unit was apparently dry beyond rejuvenation, which is a problem I have never encountered with a Blick. 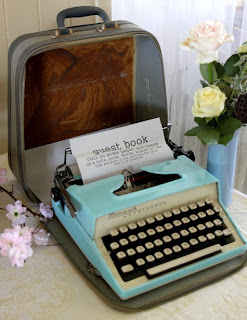 A much later Remington Monarch sold for as much as $107.50, although the seller freely admitted it had been "used as a guest book at my vintage wedding ... Had a fresh paint job prior to wedding." Nice job, too - such a soothing colour. No doubt matched the bridesmaid's dress. We're into colour "sets" down here. 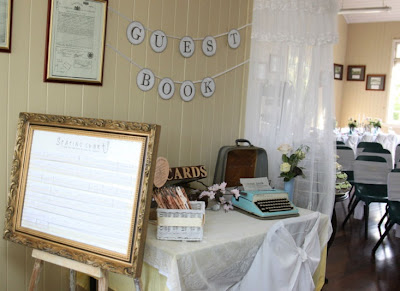 The seller also sold her wedding guest book sign, but this only got two bids and went for $1.25.
This plastic Adler Tippa 100 sold for $46. See below it an earlier Adler Tessy, similar to the German-made Triumph-Adler Tippa, which came up for sale in the US. Nakajima also labelled one of its millions of machines an Adler Tessy - I believe Jett Morton owned one in white: 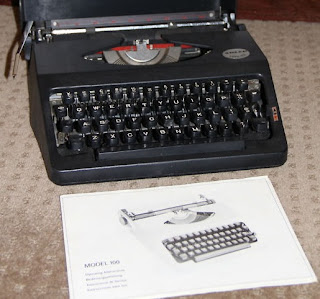 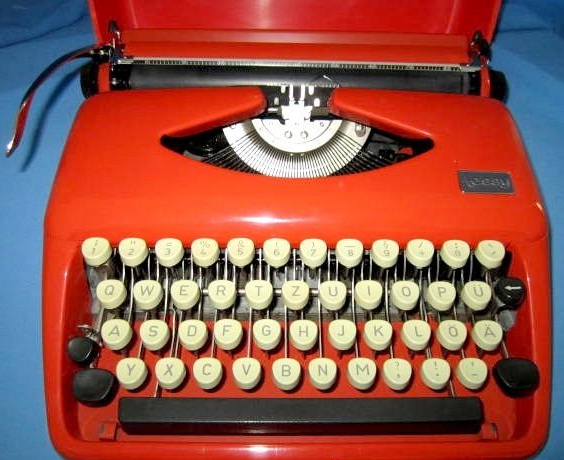 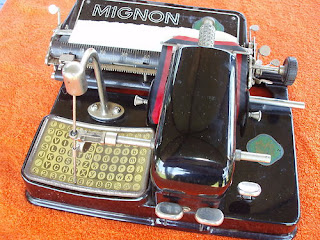 This Mignon, identical to the one I own (including, ridiculously, the red-and-black ribbon), disappeared quickly at $400. I think mine is still in the house - I better go check! After all, Alan Seaver once had an Optima P1 sold by a Melbourne dealer (to me) while it was still in his house in the US. And this is, when all is said and done, Australian eBay. Stranger things have happened ...

Posted by Robert Messenger at 00:38

I'm still reeling from my good luck in finding not one but two Hermes 3000s in near mint condition for £26 the pair - with a potential Imperial 66 standard thrown in if we can work out logistics. None were listed as funky or atomic, or even retro. Still, I was trying to impress upon Bowker Junior that you only knew how much something was really worth once someone has paid for it. He'd found an old set of Brooke Bond Tea collector cards - a full set of 1968's Hostory of The Motor Car - value, around £2.50. Poor lad.

Thanks for the insights on the typewriter market down under! I think the swiss market is much less "productive" - there are typewriters showing up and vanishing, but almost none are bought, so the bidding races are missed out.

Hi Robert! I stumbled onto your blog whilst researching the mysterious Pinnock sewing machine. I adore the orange typewriter and lamp set - they're retro and they're orange, two of my favourite things!!
Also really appreciate the photos in the previous post, although I will admit to paying more attention to the ladies' frocks than the machines they are using ;-)

Nice collection, as usual. That Erika has Hungarian keyboard, btw. :)

I have recently inherited a olympia Monica travel typewriter in its original case with complete manuals in German and English. Just wondering its worth and where I should sell it as we have no need for it. Thanks Beck

Hi Beck. I can't evaluate it without seeing it, an even then it's impossible to say what it might fetch on, say, eBay, which is probably the best place to sell it. Are you in Australia?

Yes I'm in Melbourne! I just didn't want to sell it without an idea of what it's worth. I could email photos of it. Thank you for replying :)

Most eBay sellers are in the same position, of not knowing exactly what they will get for their typewriters. All you can do is list it at a sensible starting price and find out. If it's Wilhelmshaven-built and in very good working condition, by rights it should fetch $100 or more, but who knows ...?

Thank you for your help!