This story appeared in the magazine supplement of The New York Times on Sunday, April 27, 1902. One can only presume it is true. It was written long before the days of politically correct journalism and should be read in that context. No offence is meant by republishing it here, 110 1/2  years later. I am posting it because I find it highly amusing, that's all. 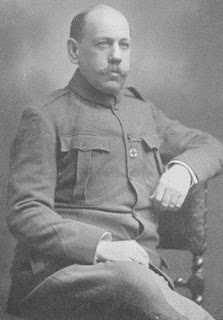 Julian Ralph (born Newark, May 27, 1853; died New York City January 20, 1903) was an American war correspondent. He worked for the New York Sun and was China correspondent for Harper's Weekly during the First Sino-Japanese War from 1894. 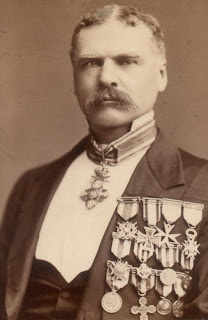 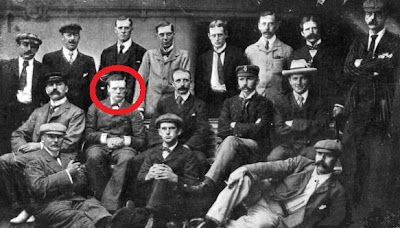 A daredevil typewriting war correspondent would fit the bill for Winston Churchill, but it wasn't him. Churchill is seen above (circled) in a group of correspondents who covered the Boer War. 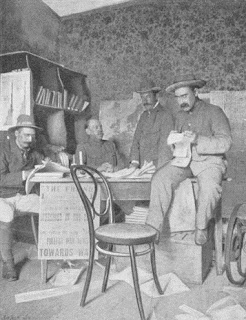 It is also unlikely to have been Rudyard Kipling, seen above right, since Kipling didn't like typewriters. He might have done if one had saved his life. Here's that story:

Posted by Robert Messenger at 21:23

I love it! I wish we knew what typewriter this was. Too early for the Standard Folding. A Blick perhaps?

Hi Richard. Yes, I too really wished, upon first reading this, that I knew what typewriter it was. I agree it's most like to be a Blick, which Lionel James used in an even earlier African campaign (Sudan). The reference to keeping it a-rattling certainly fits the bill for a Blick, which does rattle along quite loudly. Also the space-bar might protrude just enough to get picked off my a bullet. The whole does seem almost believeable.

That's a great story! War reporters haven't changed much have they?

We see it again - the pen is mightier than the sword!

Well said. I was amused that he said he couldn't even carry a toothpick!