On This Day in Typewriter History: The Perfect Typewriter 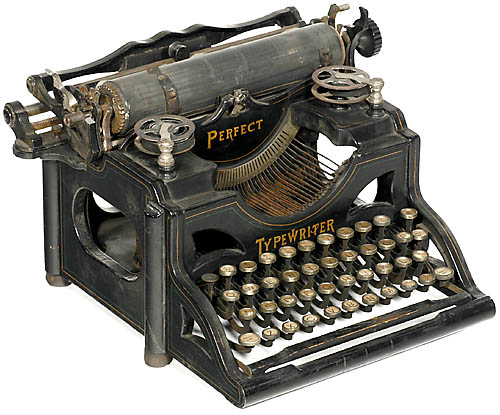 Here’s a trick typewriter trivia question: Who is the most prolific typewriter inventor of all-time?
Alexander Timothy Brown?
Edward Bernard Hess (probably most people’s favourite)?
Walter Jay Barron?
Burnham Coos Stickney?
Jacob Felbel?
John Carlisle McLaughlin?
Clio Brunella Yaw?
Byron Alden Brooks?
Franz Xaver Wagner?
Christopher Latham Sholes?
The answer is none of the above.
Although all those on this list of 10 would have been issued with between 50 and 90 typewriter patents each, they are easily outstripped by one Jesse Alexander.
Jesse who? Well may one ask. But the US Patent Office would unquestionably have known Mr Alexander exceedingly well – though it may not have been aware of the Alexander Typewriter Company.
During my regular typewriter patent searches, I kept coming across the name “Jesse Alexander” – so often I eventually became sufficiently interested to find out something about this mysterious typewriter inventor.
I first tried to keep a record of Alexander’s typewriter patents between 1901-1929, but lost count way past 100. The man’s output was quite astonishing.
Readers might not be so surprised to learn, however, that out of all that designing Alexander produced just one model of typewriter – the Perfect, said to be from 1904. (It may, in fact, be a little later than that).
Among all manner of typewriter components, from ribbon spools to typing actions, Alexander designed some very ornate and attractive frames for typewriters, notably between 1901-1915. One of those was used on the Perfect. It is the frame for which Alexander applied for a patent on this day (November 12) in 1904. 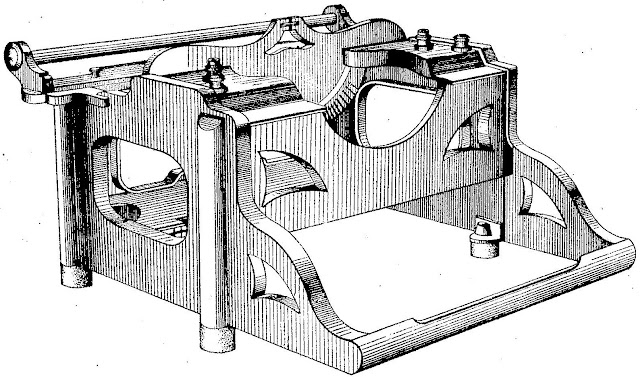 Please note the paper plate on the Perfect seen above is from a later (1911) patent. 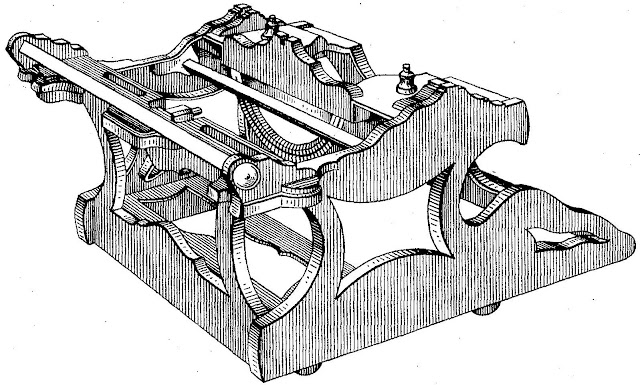 One of these Perfect typewriters was put up for auction by Uwe Breker in Cologne on May 16, 2009, and presumably sold. The reserve on it was $2310 and it was estimated to fetch a top price of a mere $5300. This for what has to be one of the rarest typewriters in the world. As Uwe pointed out, only three complete models were known to exist at the time of the auction. 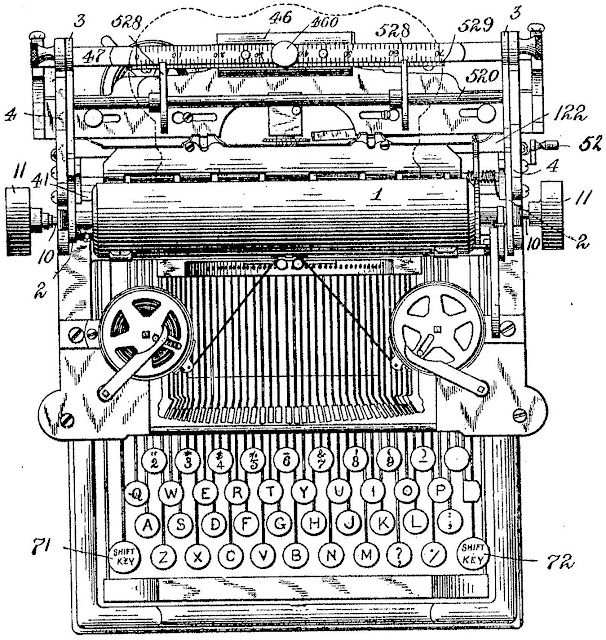 Alexander's design for the Perfect, 1902
One of only two typewriter histories to give this man Jesse Alexander even a passing mention is Michael Adler’s Antique Typewriters, which dates the Alexander typewriter to 1914 but has Alexander coming from Jackson County, Missouri. Alexander did live in Missouri, in Austin, as a child, but he was born in Kentucky and spent most of his life in Brooklyn.
The entry on the Alexander Typewriter Company in A Condensed History of the Writing Machine (1923) is far more intriguing. It places the company in Endicott, New York, in 1907 and says its history was “marked by troubles” and that Jesse Alexander had ran into constant court action over his designs.
A Condensed History says there were plans to move the company to Kansas City, which may be where Adler got the idea of Jackson County from. However, A Condensed History goes on to add that the Alexander company was resurrected as the United States Typewriter Company in East New York, Long Island, in January 1908. In 1914, “another or the former” Alexander company had a factory in Brooklyn, much closer to Jesse Alexander’s home. This ties in with Alexander’s census claims to be a typewriter manufacturer in 1905 and again in 1915, and to own his own manufacturing factory in 1920. 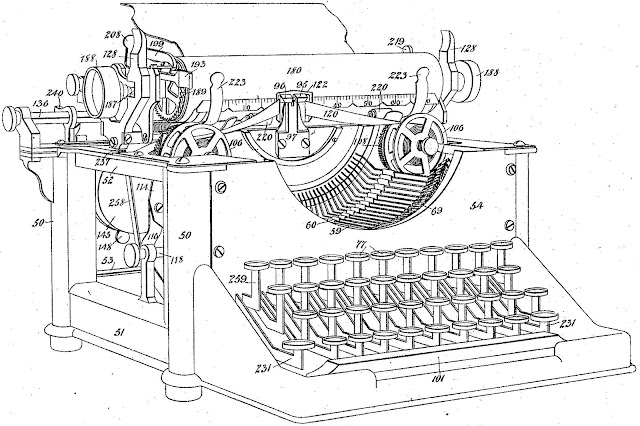 Alexander's first full typewriter, 1901
The vast majority of Alexander’s patents were partially assigned to individuals – ranging from a coremaker in a foundry (Herman Benke) to a circuit court lawyer (William Haldon K. Davey) to teachers and doctors (the Cronson brothers, Bernard and Reuben). In the last days of his designing in Brooklyn, Alexander assigned his patents to his sons Lee and Jesse Jr and daughters Kittie Jr and Tyve. Sometimes the shares were divided into 100 parts, with an assignee receiving 62.
In the early 1920s Alexander decamped west, sans family, and eventually settled in Los Angeles, were he died on August 16, 1929, aged 61.
Where A Condensed History is most intriguing is in suggesting that sometime after World War I, Alexander lived in England, working for a “famous British munitions works who proposed the manufacture of another Alexander invention, a four-bank, single shift lightweight typewriter”. See the drawing for just such a machine below – it’s a cut down version of the Perfect, one which was patented by Alexander in 1916. 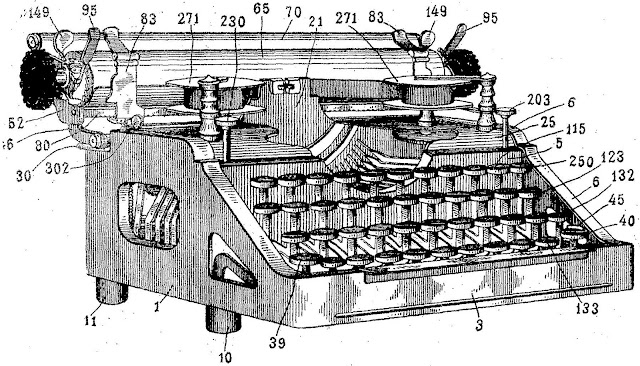 The truth is more mundane, at least for typewriter lovers. Alexander did go to England, in 1919, returning in March 1923, but he declared in his passport application that he was going there to make and sell artificial arms and legs, but not for import or export purposes.
In that application, Alexander swore he was the son of the late Jackson S. Alexander and had been born in Lexington, Kentucky, on October 22, 1868. Yet less than three years later, on his return to the US, he said he was born in Lexington on February 12, 1868.
Throughout his life, the details Jess Alexander gave census takers about his birth month and year, and the state he was born in, varied considerably. Methinks the man might have had something to hide. Or a very bad memory for dates and places. Perhaps his mind was too preoccupied with typewriter patents for him to worry about such minor details as place and date of birth.
Alexander was a telegraph operator who began his inventing in Chicago in 1894, mostly on bicycles and odometers and velocimeters. He had settled in Brooklyn by 1900 and soon after entered the typewriter business. By 1905 he was describing himself as a typewriter manufacturer, in 1910 as an inventor, in 1915 as a typewriter manufacturer again, and in 1920 as the owner of a manufacturing plant. His son Lee had also entered the business, as a typewriter mechanic. He had been a machinist in the US Navy in the last years of World War I, while younger son Jesse Jr had also started work as a machinist. Daughter Kittie Jr (Kate), too, worked with typewriters, as a stenographer.
Posted by Robert Messenger at 13:36

Gad. Robert, you continually amaze me with your research.

The Alexander (or Perfect) typewriter has intrigued me for some time -- it's one of those things I dream about finding in a shed. Thanks for the insight into its inventor; I had no idea that he was so prolific in ideas!

It certainly was a clever move to call the typewriter "perfect". A great argument for selling, who would refuse a "perfect typewriter"?
Reminds me of a student of mine, whose parents had baptised "Doctor". A clever move, which saved him many years of studies.