When Perseverance with Typewriters is a Good Companion 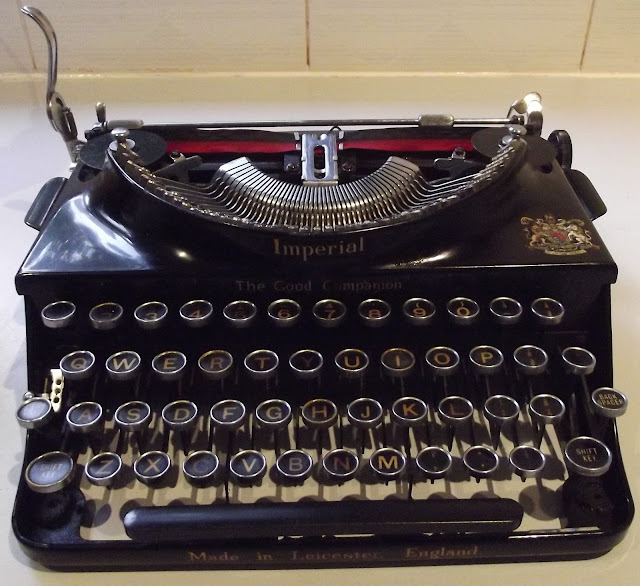 As Richard Polt observed not so long ago, there's little better than receiving a "new" old typewriter and in short time making it look schmick and getting it working well. What is marginally better is when one had begun to worry about receiving the typewriter at all.
Late this afternoon a 1938 Imperial Good Companion Model One (serial number BU926) arrived on my doorstep. I'd almost given up hope of ever seeing it. It seemed to take forever to get here. An Oliver portable had arrived earlier in the afternoon, having taken just a couple of days to fly in from England (Leicester, of all places: home of the Imperial). The Imperial had come from Sydney, less than 300km away.
I fully empathised with Richard over the run-around he got trying to track down an Adler Universal. This, too, was a difficult transaction. It was a "pick-up only" sale. No problem, I thought. About 95 per cent of the typewriters I've bought in the past year or so have been picked up by couriers and delivered to my front door within a day or two - three or four times faster yet at a fraction of the cost and the risk of damage of postage.
This, however, was the one instance in 100 such arrangements when things did not going so smoothly. The usual procedure is that I book and pay for the courier, and the courier emails me a PDF of the consignment note with barcode. I forward that to the seller, who simply has to print out the PDF and Cellotape the consignment note to the typewriter case - which doesn't go in a box, so the courier can see what it is and take due care of it.
In the case of this Imperial, however, I could sense problems from the moment the auction ended. "Idont have a printer" messaged the seller, in precisely that fashion (he obviously didn't have an apostrophe key, either). At this point I almost told him to relist it. What to do? I thought about it overnight, then decided to print out the consignment note myself and post it to the seller. All of which, of course, took time. Fifteen days after the sale, I received the typewriter. Yes, from less than 300km away! I could have driven there and back 30 times. 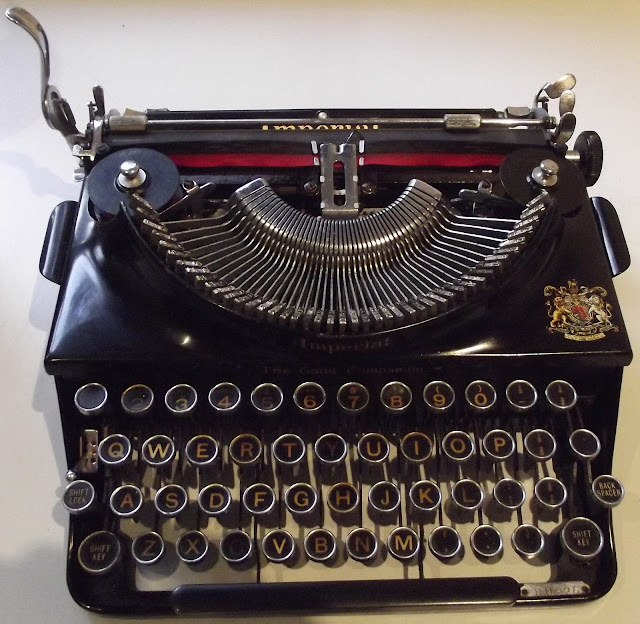 What was also different with this transaction was that first impressions did deceive. I opened the case, looked at the typewriter, and thought it was in excellent shape, that the wait for it had been well worth it. But the first movement of the carriage (always the first thing I do with a "new" old typewriter is test the carriage movement) proved otherwise. Something was causing a bump, and, believe it or not, with each bump the margin release key jumped up and down!
All the same, at first it seemed to type pretty well. But then the shift key started to play up, and not return to lower case. In fact, the carriage started to lock into the cap position. Oh, oh. Suddenly, I lost a previously good printing impression. Ah, the right ribbon spool looked wobbly. Worse still, it wasn't turning. And no wonder. It was jammed in tight - not even lifting the rightmost typebar would allow me to prise it off its capstan. 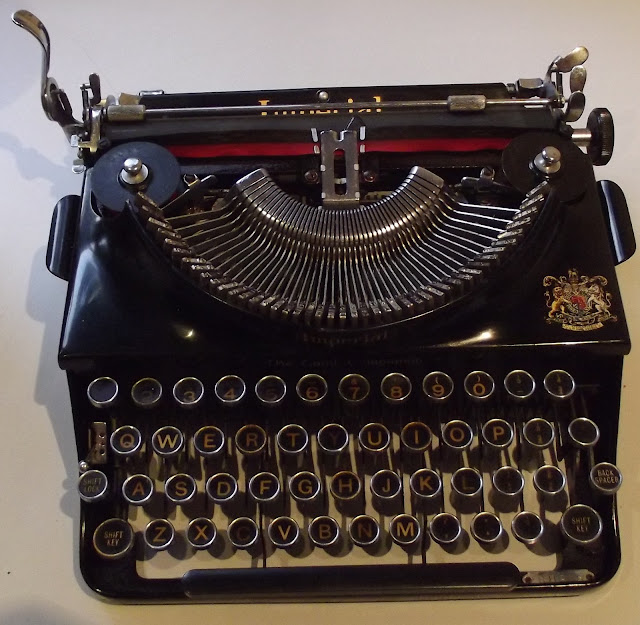 This is really weird, but I'd been there, done that only days before. Last Friday Jasper Lindell (of DHIATENSOR blog fame) came over to pick up his own Imperial Good Companion Model One.  The last thing I'd done before he arrived was to put the spools back on - with great difficulty! The right one just wouldn't slot into place smoothly.
Jasper's IGC is, I believe, a machine he inherited from his grandfather, and which Terry Cooksley, sans tools, had tried valiantly to bring back to life at the Typewriter Exhibition opening in July. Subsequently, Jasper and his father had worked on it and taken out the platen, but couldn't get it back together. So Jasper brought it to me to reassemble and to finally get it working. My son Danny and I managed to do that pretty successfully.
But after Jasper had got it home on Friday, he emailed me to say one of the typeslugs was not hitting the printing point properly. I'd forgotten to tell him that I'd had to adjust several typebars, and that there was still a serious problem with the right ribbon spool. The machine had, I surmised, at some time in its past received a hit, and things had been put out of kilter.
As if the typewriter Gods were making me pay for this oversight - of not telling Jasper the full truth about his IGC - here I was with exactly the same right ribbon spool problem with my latest IGC.
I quickly noticed that the whole right ribbon spool set-up was out of alignment; the gate was buckled in and pressing against the spool, for one thing, and the spool top was at a discernible angle. There was a moment when I was tempted to put this IGC to one side, into the "too hard basket", with a "I'll get back to it another day" label on it. 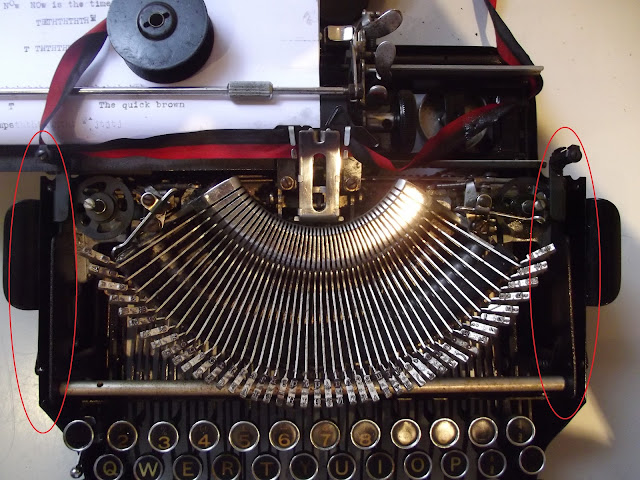 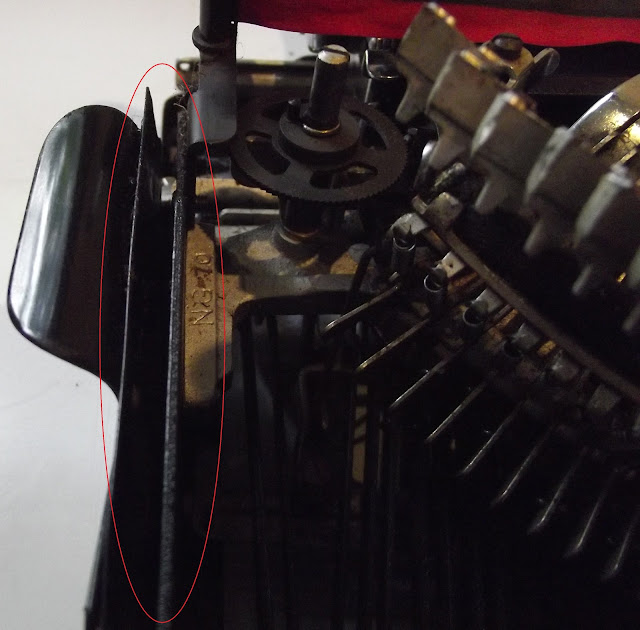 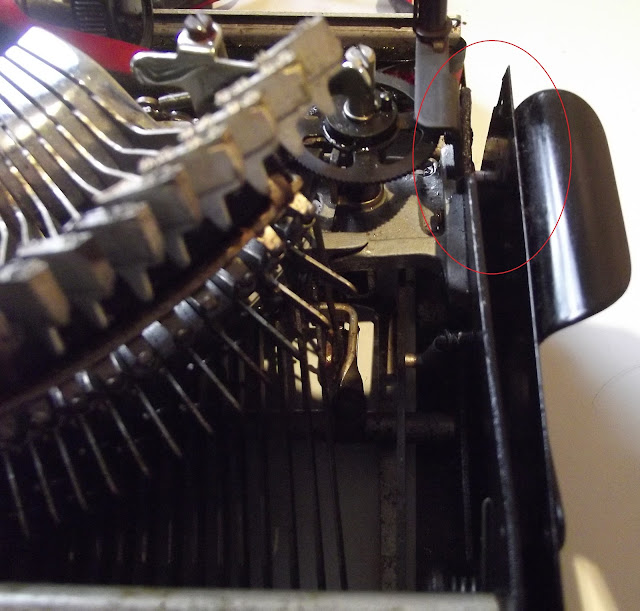 Bad, buckled side
No, I decided, I'll persist. So I took off the top section. The damage was glaring. The whole right side of the inner frame was quite evidently buckled inward, forcing the spool arrangement attached to it to be in the twisted position that was causing all the problems. 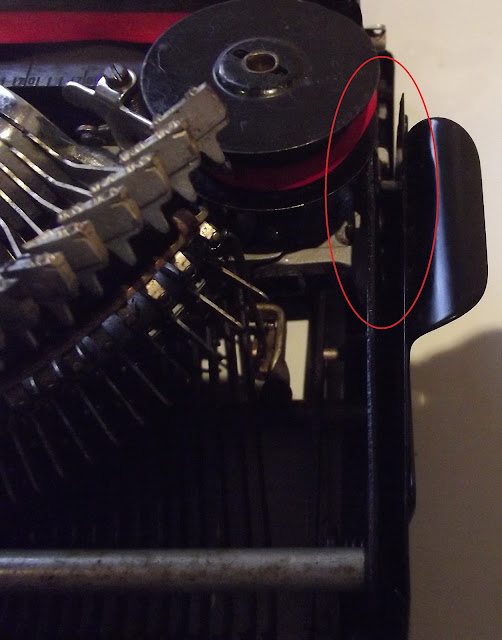 All straightened up ... everything fixed!
All the problems, indeed. I know it seems hard to believe, but after I'd gently manoeuvred the inner frame back into line and put the top back on, all the other problems - the carriage movement bumping, the shift lock sticking, the margin release key jumping - just disappeared. The Imperial worked fine. If only all typewriter problems could be fixed this easily. The buckled inner frame must been causing a whole range of problems. Again, as with Jasper's IGC, I figured my machine must have taken a decent hit at some stage - in exactly the same place, causing exactly the same set of problems. My guess is that the hit was taken on the edge of the IGC's right side handle, thus causing no obvious, outward sign of damage.
Ah, typewriters ... endlessly fascinating. 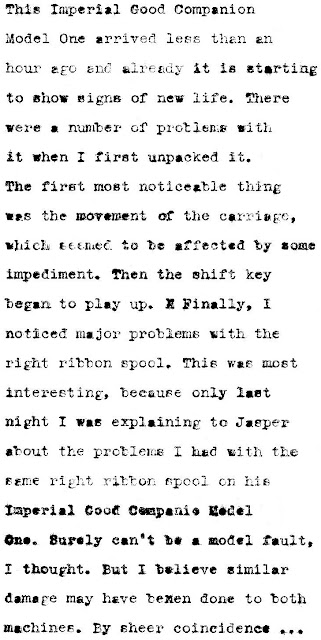 PS: This is the second IGC (the other was a more modern model) in a week with which I had problems with the case base. In each instance, it was apparent the typewriter had never been taken off the base. This meant that over many years the boots of the typewriter had disintegrated and become stuck to the base - not a good idea. I can understand people feeling it was OK to leave their portables attached to the base for most part, but occasionally taking it and cleaning underneath would have been a far better. Although there is a small gap between the bottom of the typewriter and the case base, an amazing amount of grime can get in and stay lodged under the machine, in its workings. Also, taking the typewriter off the base once in a while would avoid the rubber over time melting into the base.

Posted by Robert Messenger at 23:14

Great looking typewriter. It is amazing how things work out sometimes.

The IGC is on the top of my I-must-have list. Like Hyacinth Bucket, I really want one with the Royal warrant (see Keeping Up Appearances, “The Three-Piece Suite”, Series 2).

Great job fixing the spool problem. I love that so many problems with American typewriters (and obviously British) can be fixed by a little bend here and a little bend there. I believe it's called "forming" by the repair manuals. If your Hermes isn't working try bending the part back into compliance; you'll end up breaking something. Sometimes Swiss and German precision isn’t always the greatest thing.

It is a beautiful little machine and I'm glad you were able to get it back into working order!

A rewarding experience after all, isn't it?