On This Day in Typewriter History: Remembrance Day and Typewriters 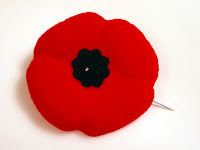 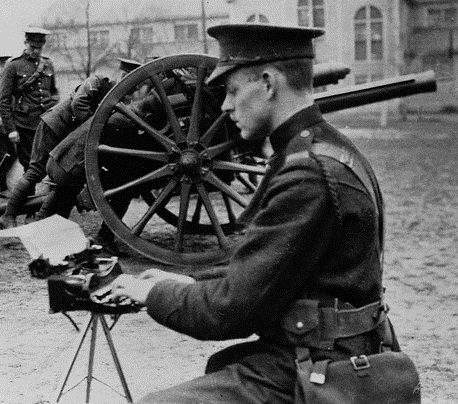 A Canadian soldier uses a Corona 3 portable typewriter
on its tripod during artillery drills in World War I
PART 172
An event such as Remembrance Day – observed each year with a minute’s silence at the 11th hour of the 11th day of the 11th month – affords those who pause to reflect on the human cost of war the chance to ponder many war-related things. Among them are rarely war correspondents or, for that matter, their tools of trade: typewriters.
Typewriters, however, played integral parts in most if not all theatres of 20th century wars, and the picture gallery below, a random selection, gives some indication of their many and varied uses in wartime – embracing both vital necessities such as communications during these periods of conflict and their aftermath: in rehabilitation and recovery.
But first Remembrance Day, also called Poppy Day and Armistice Day, and in the US Veteran’s Day. It is a memorial day in Australia, marking the anniversary of the World War I Armistice, which came into effect at 11am on November 11, 1918. The Armistice was signed in Compiègne, France, for the cessation of hostilities on the Western Front. The anniversary is observed in Britain, New Zealand, Canada, India, South Africa, France and Belgium. This year Germany’s national day of mourning, Volkstrauertag, also falls on this day, as does Israel’s Ramleh ceremony. In Poland it is Independence Day.
LEST WE FORGET?
HOW SOON WE FORGET! 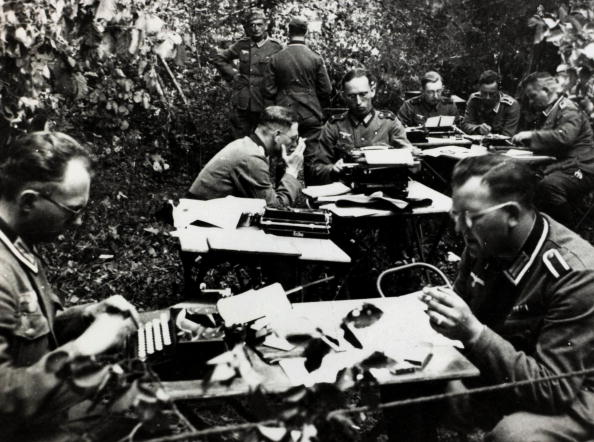 In June 1940, German officers were typing in the woods outside Compiègne in France, where the Armistice had been signed less than 22 years earlier. 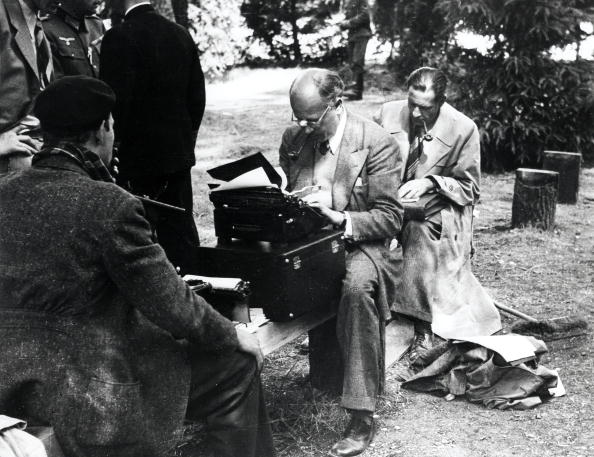 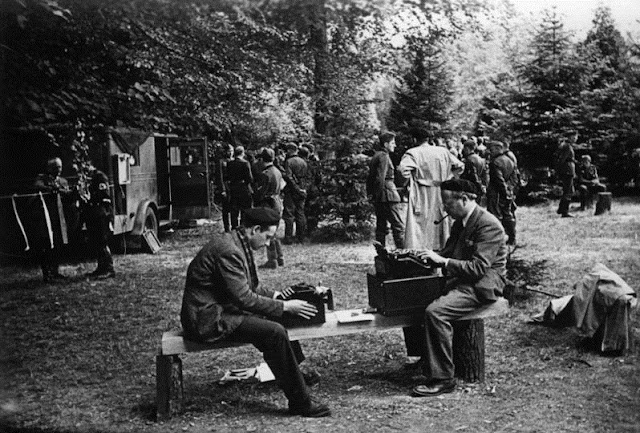 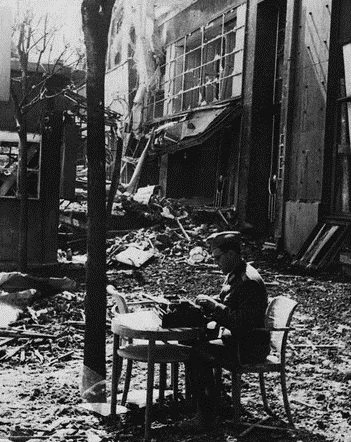 A soldier types a report amid the ruins of Belgrade in July 1941. 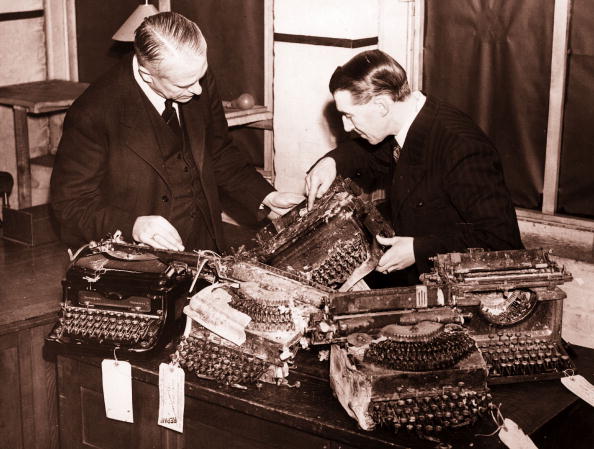 Typewriters were very much in demand in World War II, so even those seriously damaged in London’s bombings in January 1941 needed to be inspected for possible reconditioning, or parts. 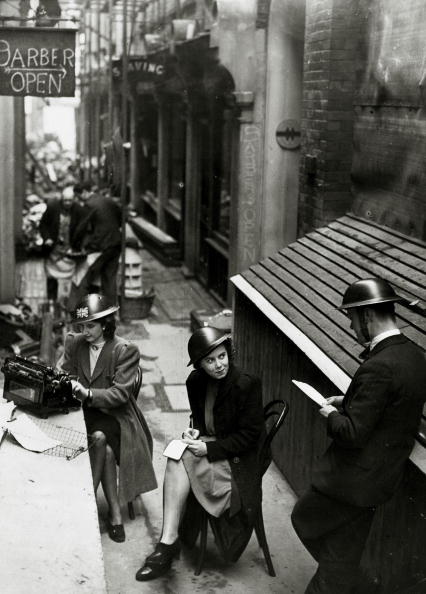 In 1940 British workers were forced out of their offices and into laneways because of bomb damage. 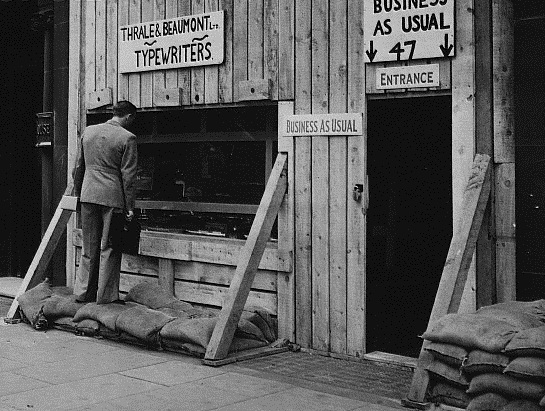 A shop window in Kingsway, London, is almost completely boarded during the bombing of London in 1942, but it is “business as usual” for typewriters.
HAVE TYPEWRITER, CAN SERVE 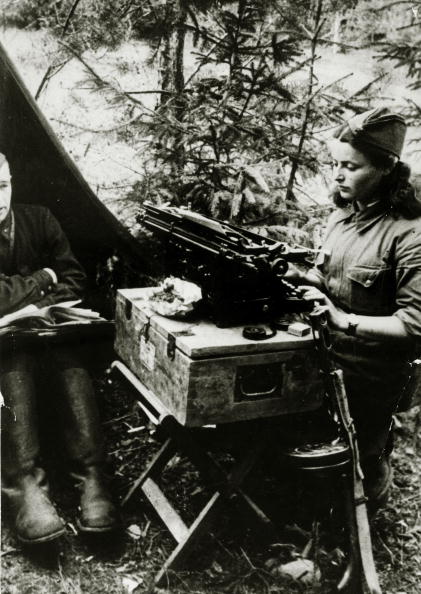 In 1941, a well-armed Russian Army typist works in a makeshift office on the northern front. A German soldier typing in the Ukraine in August 1941. 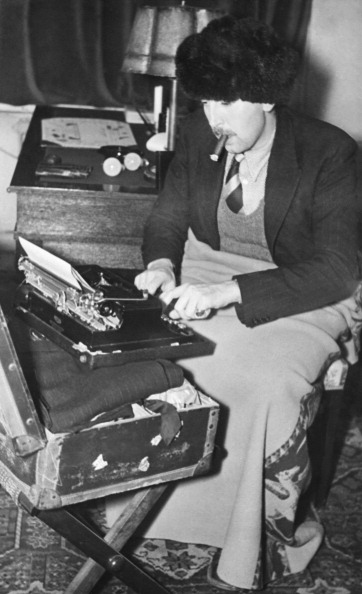 A war correspondent finds cold comfort working on the Soviet-Finnish front in January 1940. 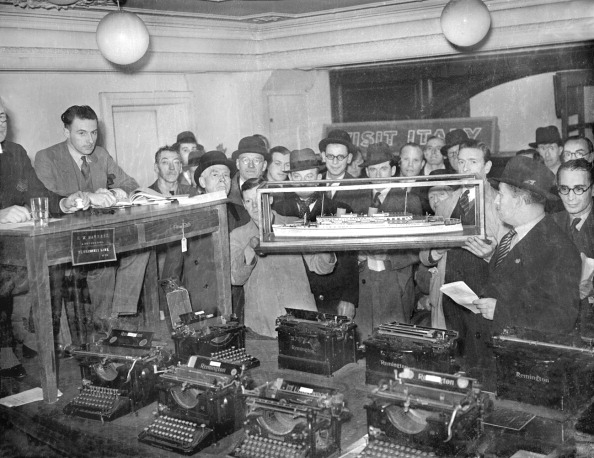 In March 1941, British authorities sold off the assets, including these typewriters, of the Italian tourism office in Regent Street, London. 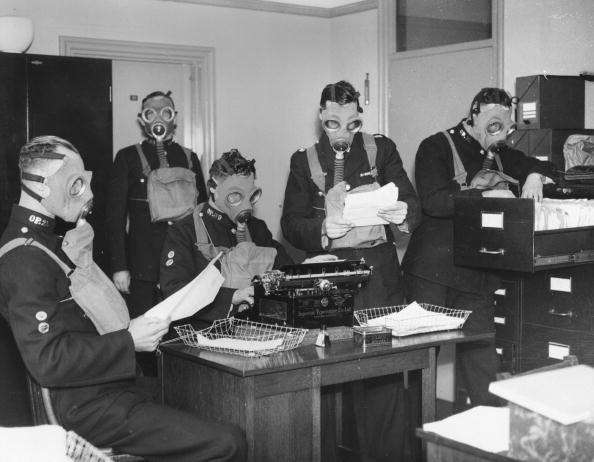 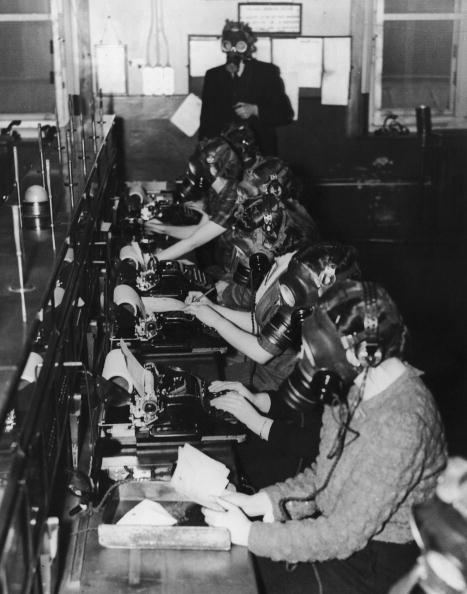 In 1940-41, gas masks were required for policemen at Oxford Central Police Station and teleprinter telephone operators in Scotland. 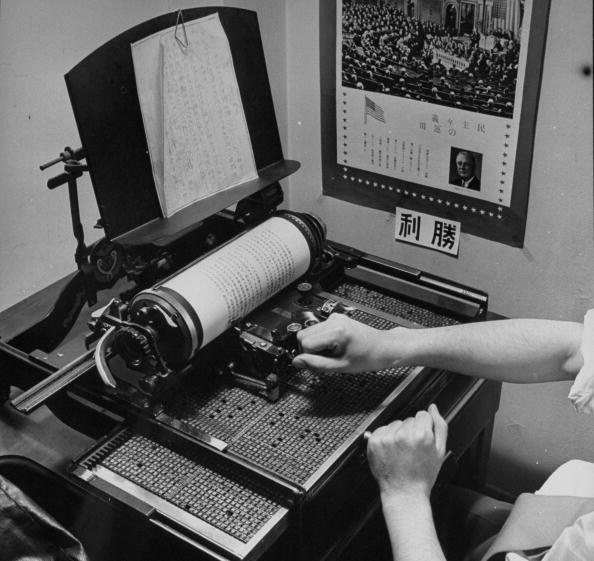 The US Office of War Information had the need to use a Japanese typewriter in February 1943. 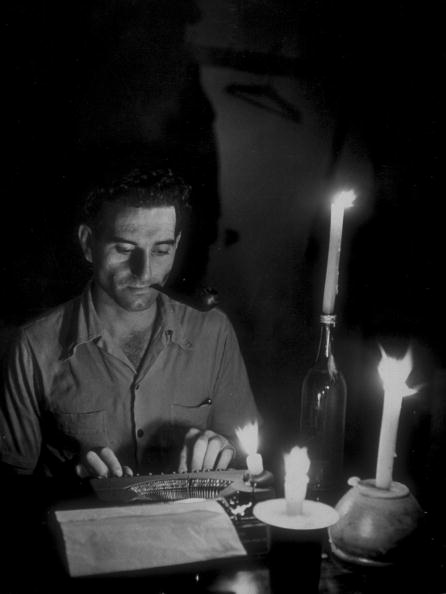 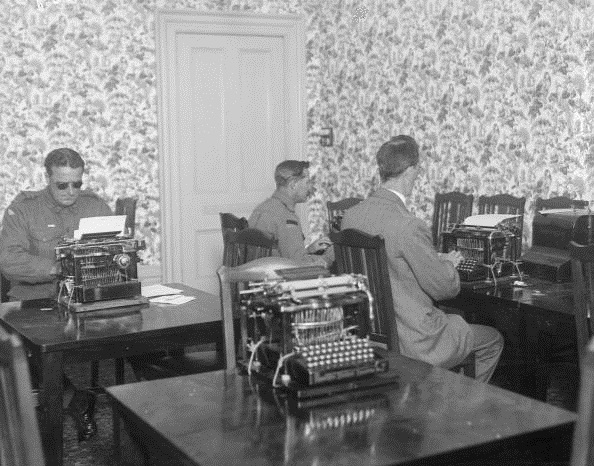 In August 1917, a group of soldiers who had lost their sight on the Western Front were taught to type at West House in Brighton, England. 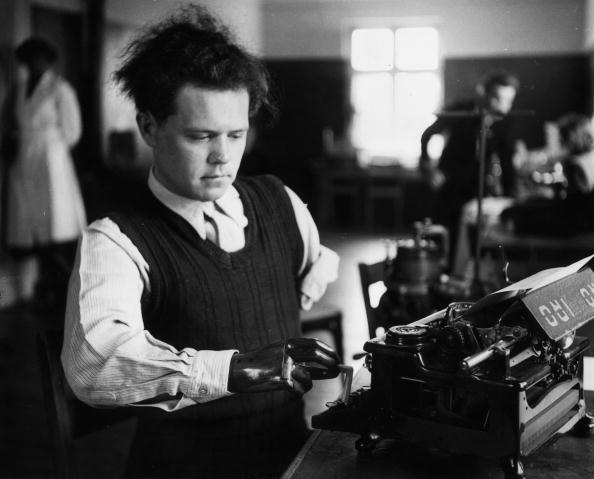 In May 1950 a man who had lost his left arm and his right hand in World War II learns to type at a rehabilitation camp in Eversburg in Germany. This will make him a better candidate for resettlement by the International Refugee Organisation. 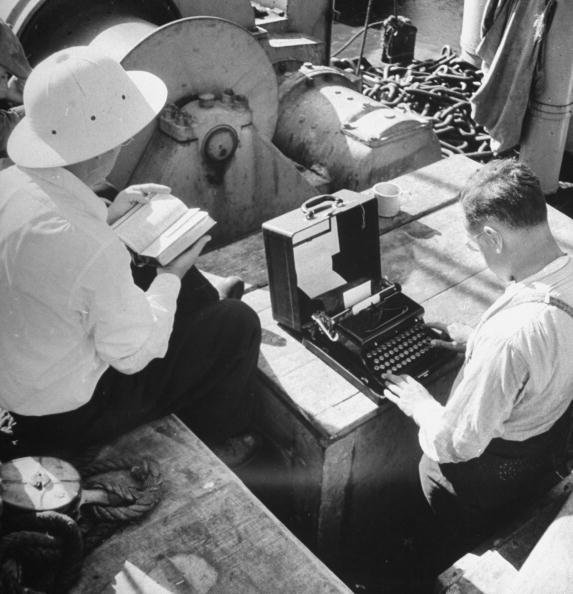 In 1941, a survivor of the SS Zam Zam uses a typewriter aboard the German prison ship Dresden. 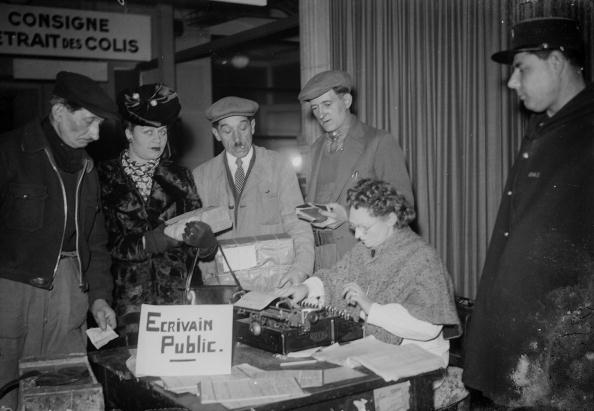 In 1943 a “public writer” types documents on the Rue Legrand in Paris. 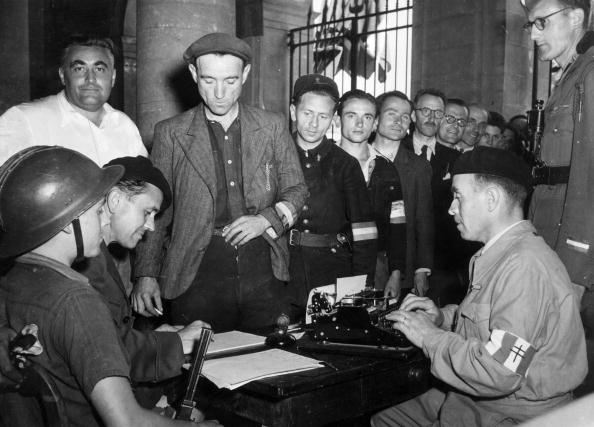 French patriots in Laval throng headquarters set up in the city hall to register as volunteers and members of the resistance after American forces liberated the ancient French town on August 6, 1944. 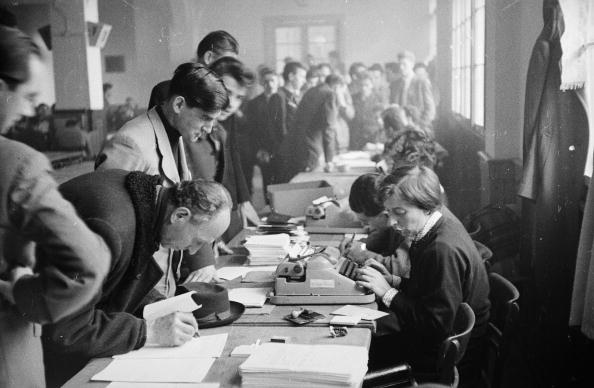 In 1947, refugees in post-war Vienna apply to leave war-devastated Europe. 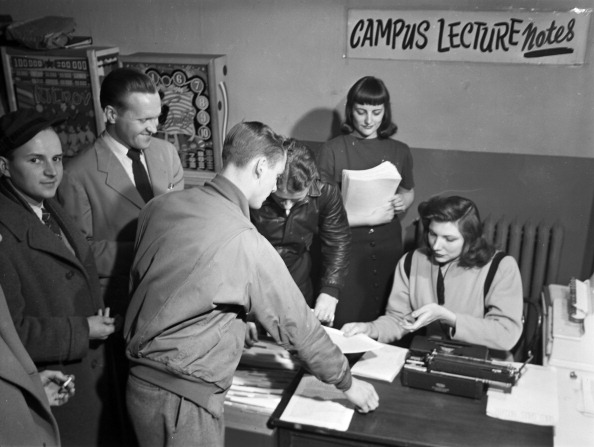 US veterans return from service to take courses at the University of Iowa and adjust to civilian life, Iowa City, April 1947. Romanian-born Nobel laureate, author Elie Wiesel, survived the Holocaust to write of his experiences. He is seen here in 1960, 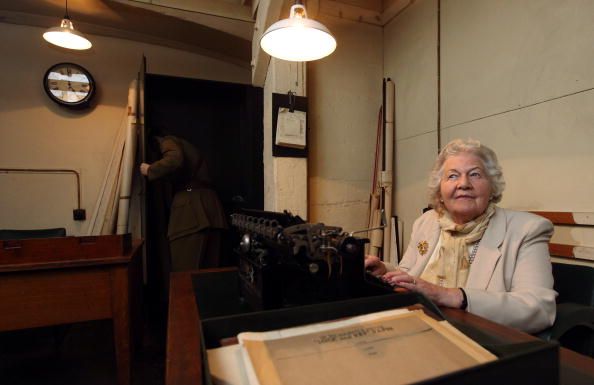 In August 2009, 70 years after the bunker was first used, shorthand-typist Myra Collyer returned to her typewriter in the British Cabinet's War Room bunker, where she worked during World War II.
Posted by Robert Messenger at 11:49

These are some amazing pictures.

How did an American reporter get permission from the Germans to report from behind their lines??

And the British ... unflappable.

KEEP CALM
AND TYPE ON

Thank you Georg and Richard.
Richard, re Shirer: Wikipedia says: "During much of the pre-war period, Shirer was based in Berlin and attended Hitler's speeches and several Nazi party rallies in Nuremberg. When war broke out on the Western Front in 1940, Shirer moved forward with the German troops, reporting first-hand on the German "Blitzkrieg." Shirer reported on the invasion of Denmark and Norway in April from Berlin and then on the invasion of the Netherlands, Luxembourg, Belgium, and France in May. As German armies closed in on Paris, he travelled to France with the German forces. Shirer reported the signing of the German armistice with France on June 22, 1940, to the American people before it had been announced by the Germans. His commentary from Compiègne was hailed as a masterpiece. On the day before the armistice was to be signed, Hitler ordered all foreign correspondents covering the German Army from Paris back to Berlin. It was Hitler's intention that the Armistice should be reported to the world by Nazi sources. Shirer avoided being returned to Berlin by leaving the press hotel early in the morning and hitching a ride to Compiègne with a German officer who despised Hitler. Once on site, Shirer followed proceedings inside the railway car, listening to the transmission relayed to Berlin through a German army communications truck. After the Armistice was signed, Shirer was allowed to transmit his own broadcast to Berlin, but only for recording and release after the Nazi version had been disseminated. Shirer spent five minutes before he went on calling CBS radio in New York, hoping the broadcast would get through. It did. When German engineers in Berlin heard Shirer calling New York, they assumed he was authorized to broadcast. Instead of sending his report to a recording machine as ordered, they put it on the shortwave transmitter. When CBS heard Shirer's call, he was put on live. For six hours Shirer's report was the only news the world had of the Armistice."
Re the Brits - yes, that photo in the police station is hilarious, even if it was staged.

PS Richard, there is another angle of that shot of Shirer, which I've now added.

So it seems Shirer was there with his typewriter, but not with permission from on top,. i.e. Hitler!

Love the pic of the Germans having a "type-in" in the woods!

Excellent work there Robert. These are some of the best photos I have seen.

Really nice post! Where did you get all these pictures?