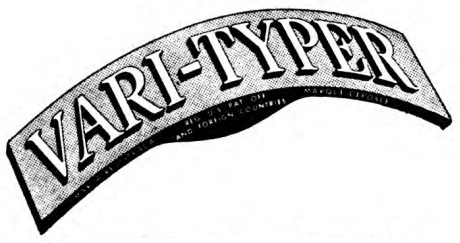 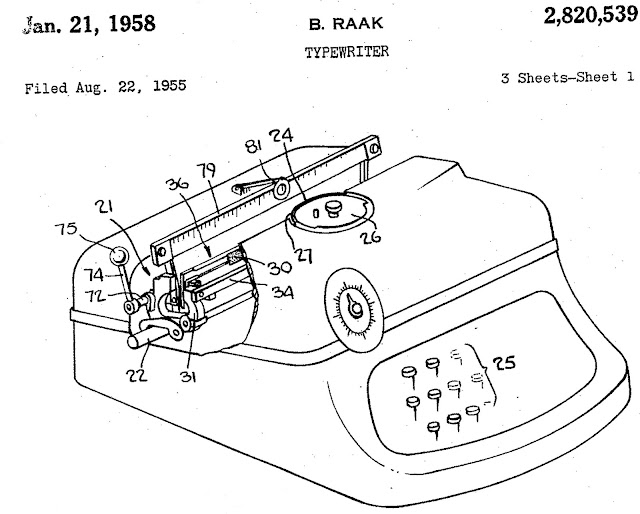 I’m bending the rules a bit here to take a look at this 1955 Bently Pratt Raak design for an upgraded Vari-Typer composing machine, but as one of these is coming up for sale on Australian eBay tomorrow, the opportunity is too good to miss. 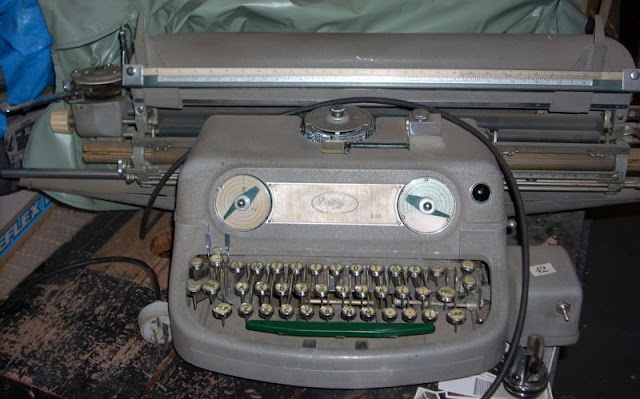 The Vari-Typer for sale
Under Raak’s re-design, the Vari-Typer developed a wide-eyed comical face with a big cheesy grin, and that’s no doubt what some lucky Australian eBayer should have on his or her face tomorrow evening. As the seller says, “You can roll an A3 sheet up inside this machine and make up an A3 newsletter.” It comes with carbon ribbons and typeshuttles. 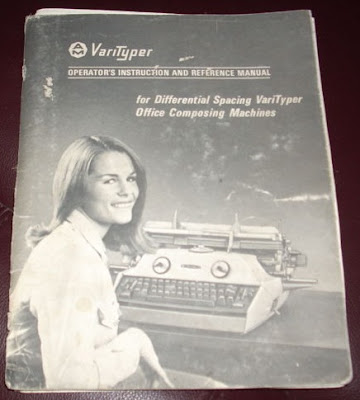 Although the starting price was $30 and there has only been one bid so far, I have to confess I baulked at the probable cost of shipping this monster from Victoria. Plus I have no room for it. But I’d love nothing better than to try out a Vari-Typer just such as this. 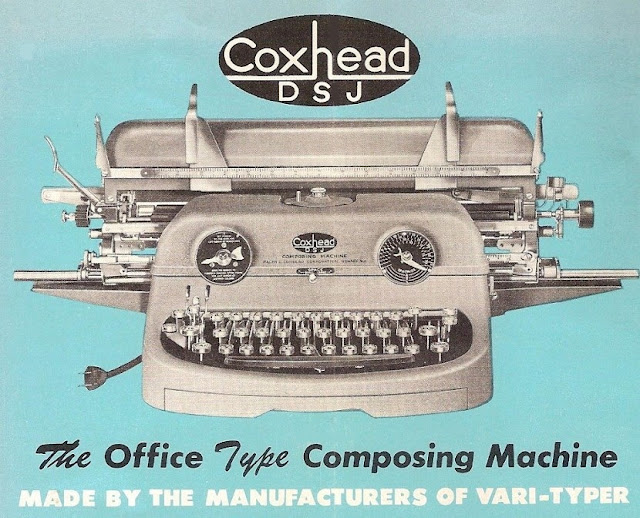 Early Office Museum
I know people who have used them for typesetting student union newspapers and the like, and they swear by the Vari-Typer. 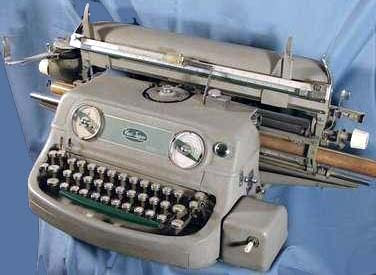 Early Office Museum
Raak, best known as a professor of typographical design at Syracuse University, and himself a type designer, was in an inventive mood in 1955. Apart from this new-look Vari-Typer, he also worked with Edward Harris Billet on this elaborate automatic camera apparatus for the Var-Typer Corporation of Newark. It was designed for making up printed copy, or photolithography, or photo composing if one prefers (a bit like photocopying). 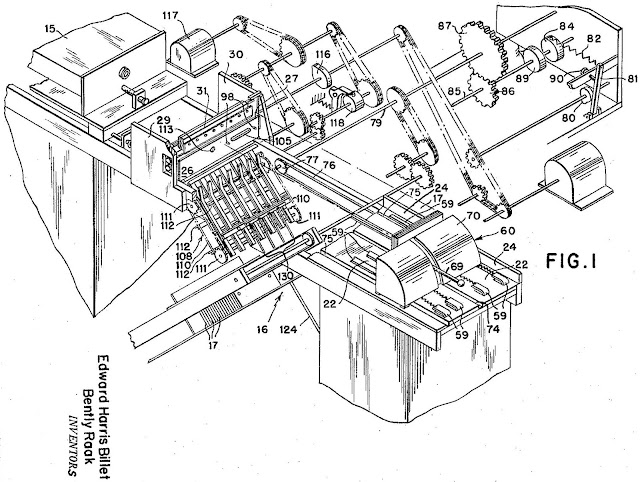 As for the revamped Vari-Typer, however, Raak was only too happy to acknowledge that the nuts and bolts of the machine were “old art” – possibly even dating back to James Bartlett Hammond and Edward James Manning in the 1880s. Raak, indeed, pointed out the printing mechanics of the Vari-Typer should be credited to Frank H. Trego in 1931 and to Charles H.Fuchs in November 1932 (close to being on this day of November 10). The patents of these two mechanical engineers were assigned to Oakland-born Ralph Cramer Coxhead, who resurrected the Vari-Typer during The Depression era. 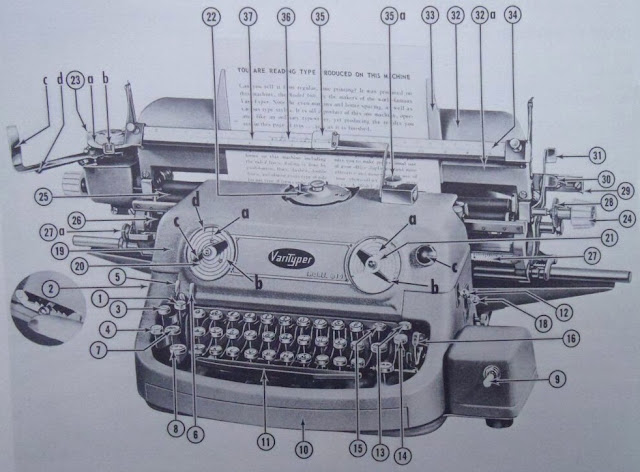 In giving a new face (and more) to the Vari-Typer, Raak created one of the last and most recognisable appearances of this marvellous typesetting typewriter. 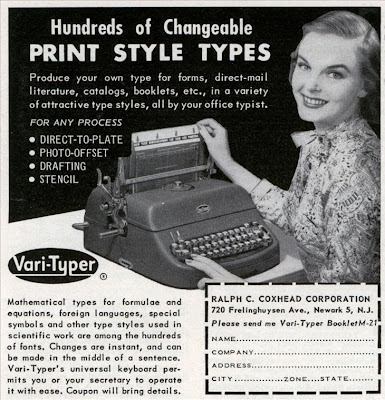 The previous, 1948 version of the Vari-Typer

Bently Pratt Raak was born in Paullina, Iowa, on September 24, 1904 ("next door to a printing plant"). He graduated from the South Dakota University with a degree in journalism, but instead of going into newspaper work he joined Coxhead in New York. Raak was chief type designer for Vari-Typer from 1937 until 1975, a remarkable 38 years. During that time, many of the typefaces with which Vari-Typer users are most familiar were Raak's creations.

In a 1975 interview, Raak said that the typeface popular at the time of the advent of the typewriter, including the Vari-Typer’s predecessor, the Hammond, was called “square serif”, and that the most successful typefaces he developed for Vari-Typer were “skinnier versions” of this. 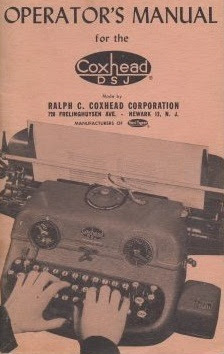 In March 1940 Raak also joined Syracuse University’s School of Journalism as an instructor in typography design. He had a close working relationship with the great Frederic William Goudy, coming to be regarded as Goudy’s protégé. 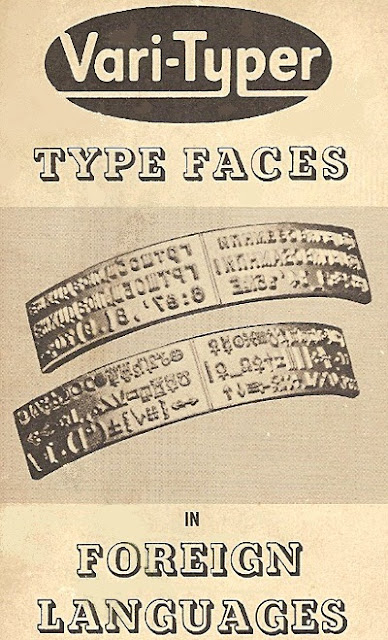 Raak wrote three books on typefaces, Typography, the Graphics of Communication (with a contribution from the Goudy Collection) in 1970,  The Development of Printing Types in 1967 and Vari-Typer Type Faces: A Guide to Better Typography (1965).
Raak died in Chatham, New Jersey, on September 1, 1978, three weeks before his 74th birthday. 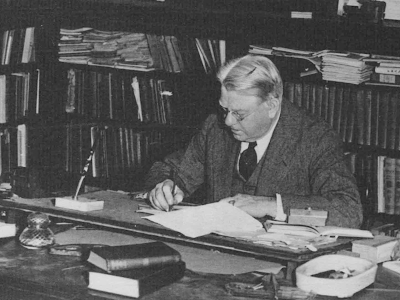 Goudy was born in Bloomington, Illinois, on March 8, 1865.  He became America's third most prolific type designer (behind Morris Fuller Benton and R. Hunter Middleton), with 90 faces actually cut and cast, and many more designs completed (122 in all). His most famous fonts were Copperplate Gothic (one of my favourites) and Goudy Old Style. 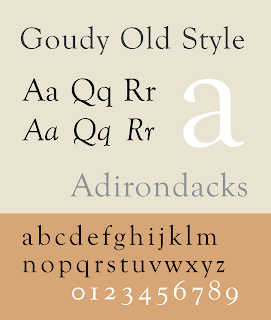 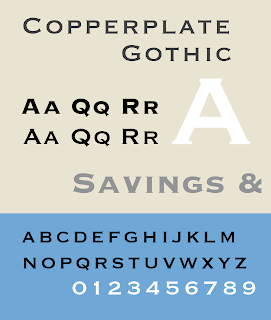 Early Office Museum
See my post on the history of the Vari-Typer here. 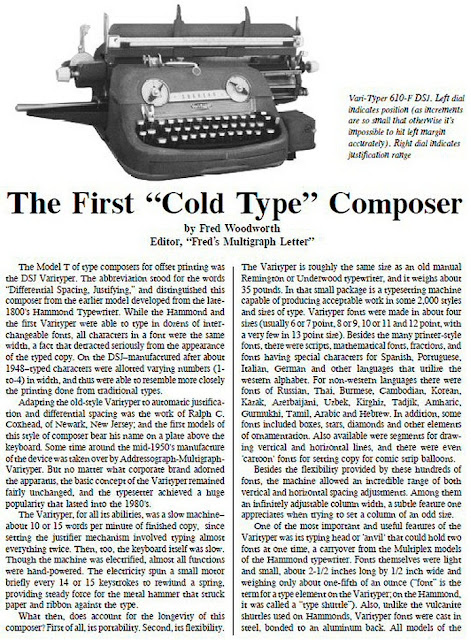 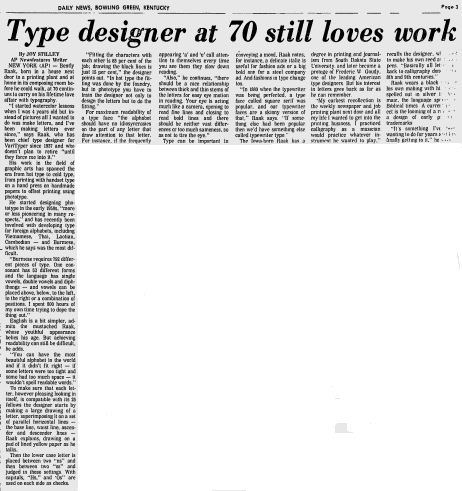 I couldn't use that. Those eyes...

There's a nice green Varityper DSJ on US eBay that has me dreaming. No, I can't handle such a monster either, but I am curious. (The DSJ stands for Differential Spacing - Justifying and I know it can do beautiful work.)

Rob, I've been eyeing that machine too! I've even had that moment of... "Now, how can I get that up here".

Whenever I read an article about VariTypers, I realize how much I want to have one. Unfortunately I haven't seen a single one yet in Hungary.

I taught and demonstrated V/Typer products during the sixties in Scotland. Your blog brought back many happy memories

And ten years later this post, like many on this blog, is found thanks to Google Search! I am fixing a VariTyper 610 F at the moment and it's wonderful to know the name and background of people involved with the creation of this technology.

One interesting aspect of this VariTyper model is that the case, as it is called in the service manual, or body of the machine, is mostly decorative (although various levers go through it). You can take the machine out of the case to access a "naked" machine for servicing. This is a fairly different design compared to the older Varityper models that had only a small front body panel attached to naked machine, following the design of the Hammond Multiplex.