On This Day in Typewriter History: Underwood and the Emperor’s New Old Clothes 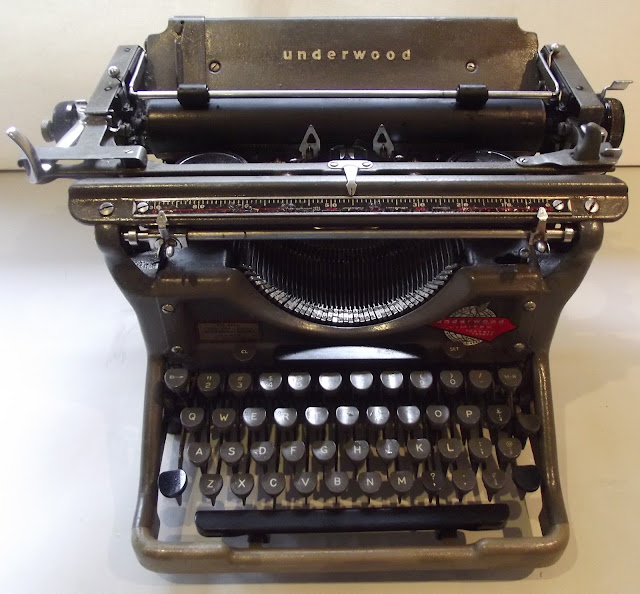 I am only too well aware there are all sorts of Underwood hybrids out there, but this is ridiculous. Positively weird. For all money it looks like a 1930s side-panelled Underwood No 6 or Standard Champion with a mid-1950s finish, decals and keytops. The serial number is 4578746 (is there a stroke and a 1 after that?), which ostensibly places it at about 1937, but that’s surely not possible with the changed Underwood logo and the keytops. 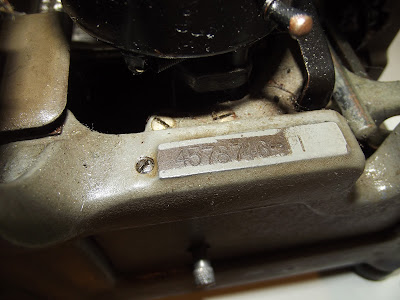 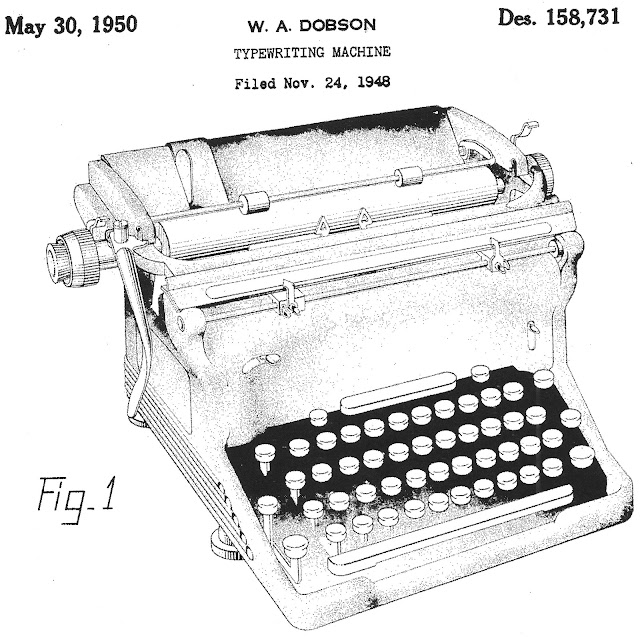 Willie Dobson's 1948 design for the Underwood Rhythm Touch
I set out yesterday to post on Willie Dobson’s 1948 makeover of the Underwood Standard. I went looking on the web to find examples and first-up came across Alan Seaver’s Underwood Rhythm Touch at Machines of Loving Grace. Alan notes, “I was surprised to find that this specimen dates to the early 1950s, because it looks much older.” 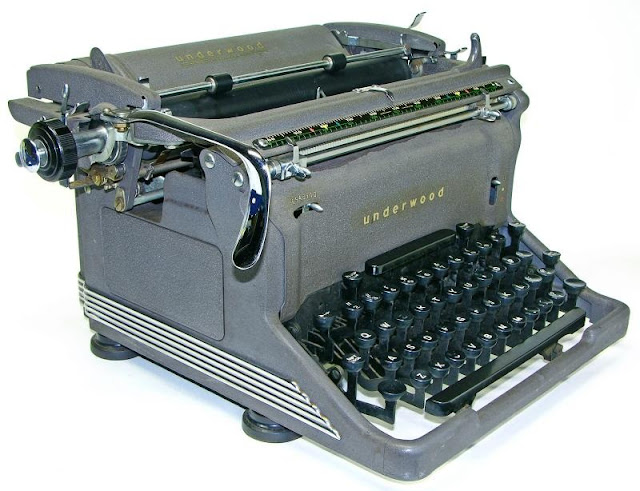 Underwood Rhythm Touch: Alan Seaver Collection.
Note the new-style decals and the lever.
I knew I only had one Underwood Standard approaching this in finish, but when I took it out to clean it up and take a closer look at it, I was astonished by the realisation it was a mix and match, stuck somewhere between the Dobson and Paul Braginetz design eras. It’s a crossbreed, representing both the old and the new of Underwood Standard designs. It has the 1950s finish and decals of an Underwood SX-100, but the frame and carriage return lever set-up of a 1930s Underwood 6. 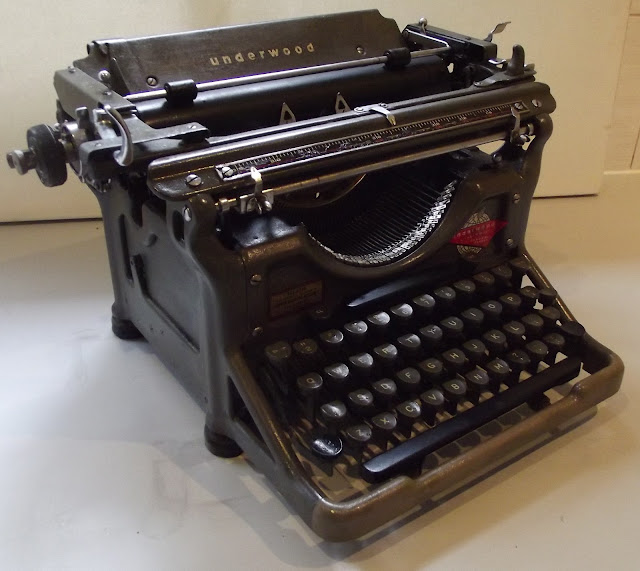 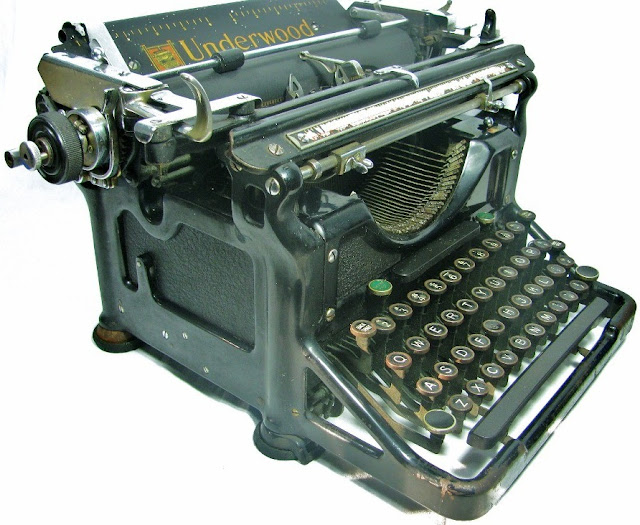 This Underwood No 6 or Standard Champion is identical
except for the decals and keytops (and a bit more chrome on top)
The fact that it was made in Toronto (and either originally sold and/or later serviced in St Catherines, Ontario) may offer some hints. Maybe.
I have to confess that I have no idea how or when I came by this machine. All I do know is that it has always strangely appealed to me – now perhaps I have a clue as to why. I always knew it was a good typer, which is one of the reasons why I was never inclined to off-load it. It was one of those typewriters that for years sat in storage with a “Will get to it one day” label on it. Then it came over here from storage and for some months again mildly called, “Deal with me.” So yesterday I finally did. 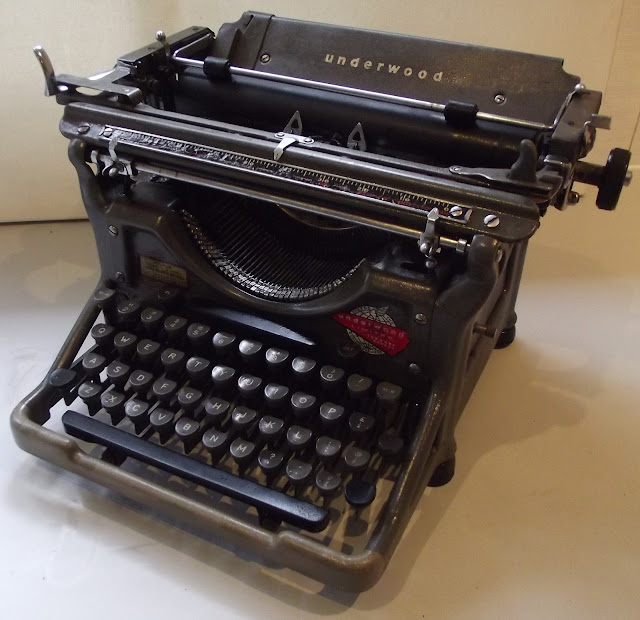 One of the things that gnawed away at me was the large chunk out of the middle of an otherwise striking front decal. I loved the decal, and hated the fact it was so badly damaged. That was one of the things I dealt with yesterday. With some careful planning, measuring, font matching, WordArt work, transfer printing and snipping, I was able to make the ugly hole in the decal just “go away”. I think it looks absolutely marvellous now. 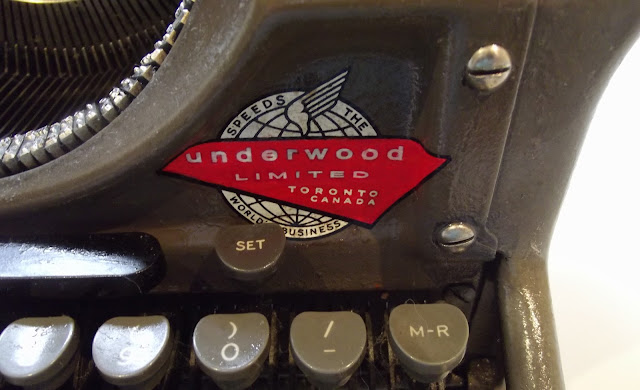 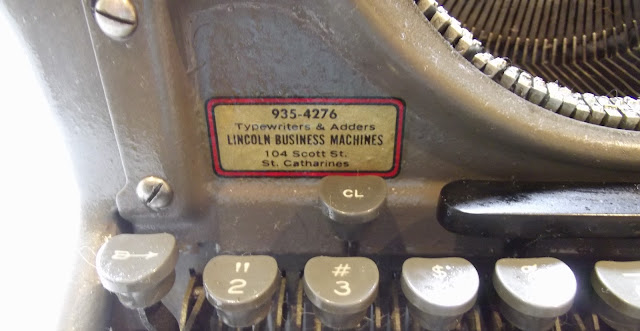 Basically, the history of the Underwood Standard’s frame design is that it didn’t change an awful lot from Franz Xaver Wagner’s 1892 Wagner through to the No 6 of 1932 onwards. That is, the carriage structure and the smiling gap beneath it, exposing the typebars, stayed pretty much the same for almost 40 years. 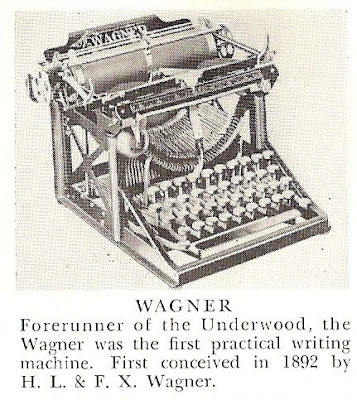 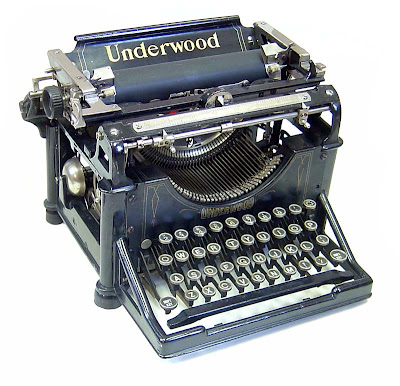 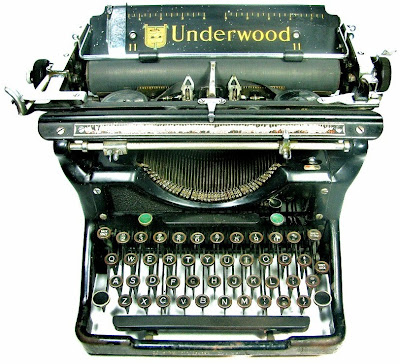 Underwood 6 Standard Champion
Putting aside the Noiseless of the early 1930s, which Remington made anyway, the smiling gap wasn’t closed off until the “Master Model” of 1939, as memorably seen in the giant model made for the New York World’s Fair of that year. This appears to have been followed by the Underwood S series. 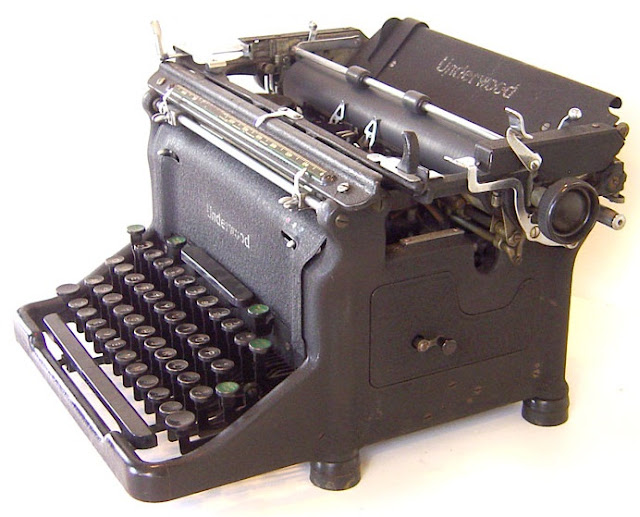 Richard Polt's Underwood S from 1943. It has the side panels but a different ribbon movement lever and the original Underwood decals.
Another significant change occurred in 1947, with the Rhythm Shift model, which marked the Underwood Standard’s conversion to basket shift, but which retained the original carriage return lever set-up. 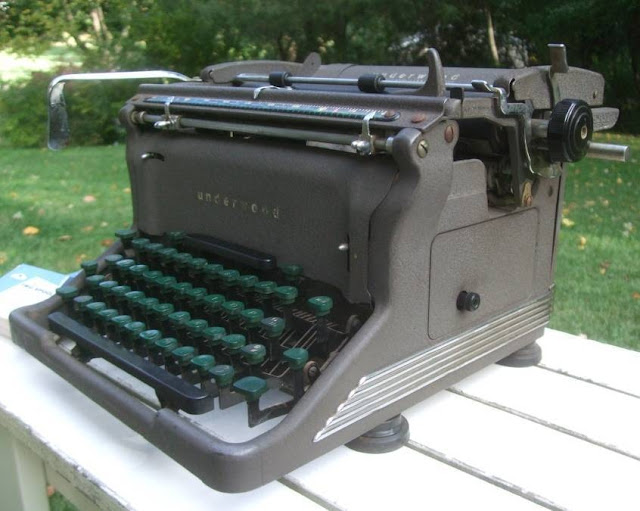 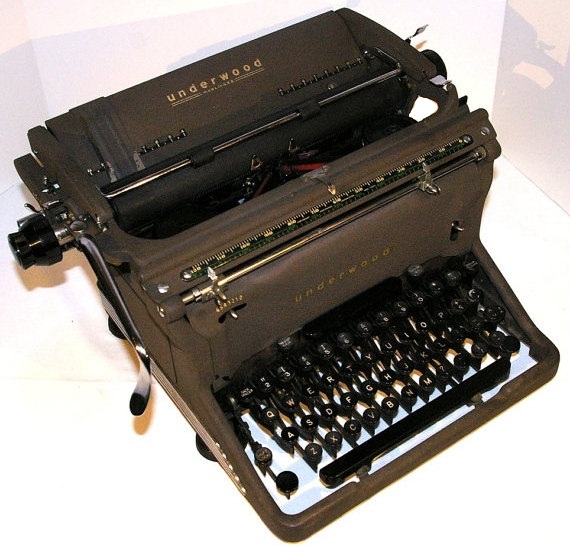 Then came Willie Dobson’s Rhythm Touch in 1948, which did away with the small carriage return lever which had served Underwood so well for more than half a century and introduced the long, drooping carriage lever.  This was succeeded by the Underwood SX-100; the Model 150 was introduced in 1955, followed by the Touchmaster two years later. 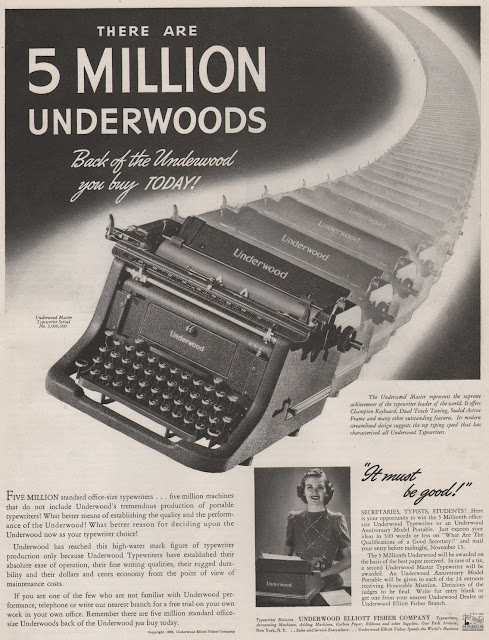 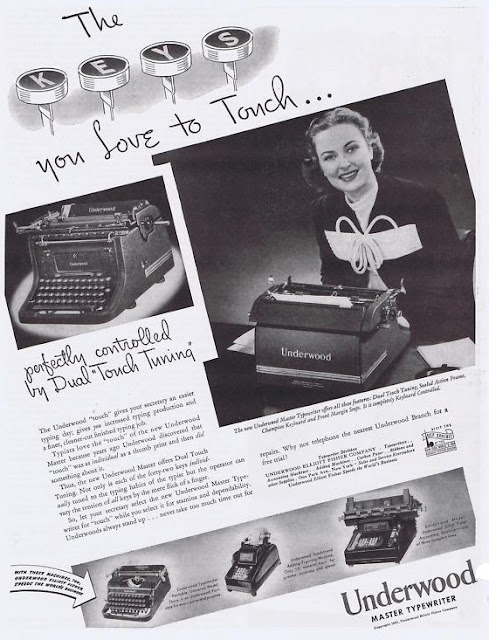 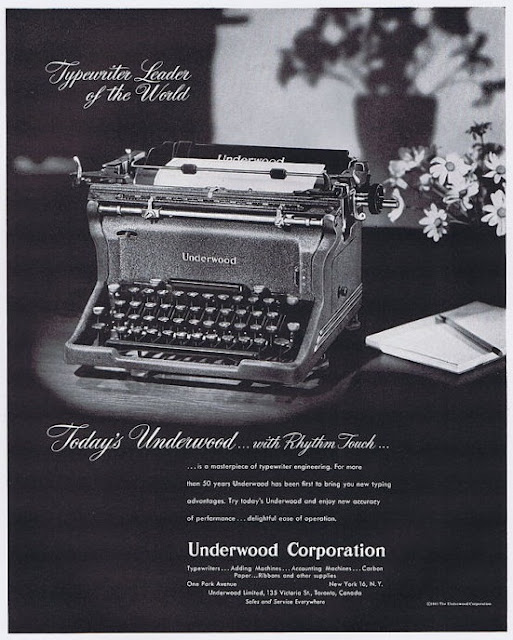 A patent application for Willie Dobson’s radical re-design for the Rhythm Touch was filed on this day (November 24) in 1948 and issued at the end of May 1950. Dobson’s only reference in the design was to Henry Dreyfuss’s re-design of the Royal Quiet DeLuxe portable in 1946. 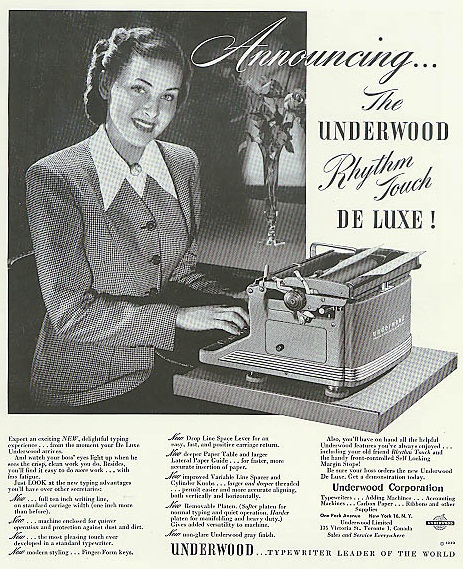 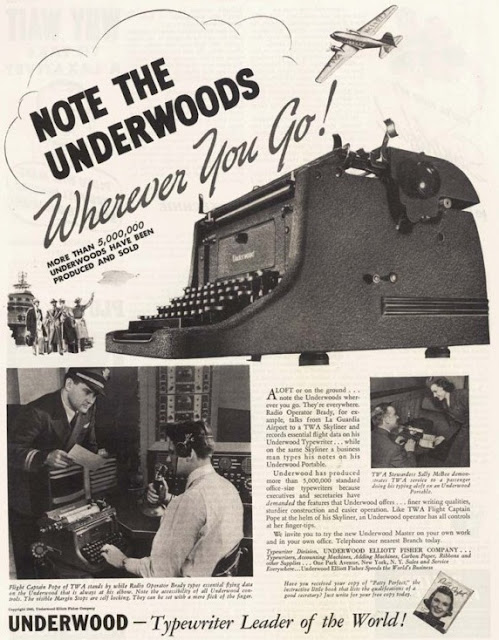 William Albert Dobson was Underwood’s chief design engineer for almost 30 years. Born in Tolland, Connecticut, in November 1870, he  started working in Hartford as a toolmaker, then as an automobile engineer. He went to work for Underwood as a toolmaker after World War I and quickly rose through the ranks to become Underwood's factory superintendent in the late 1920s. 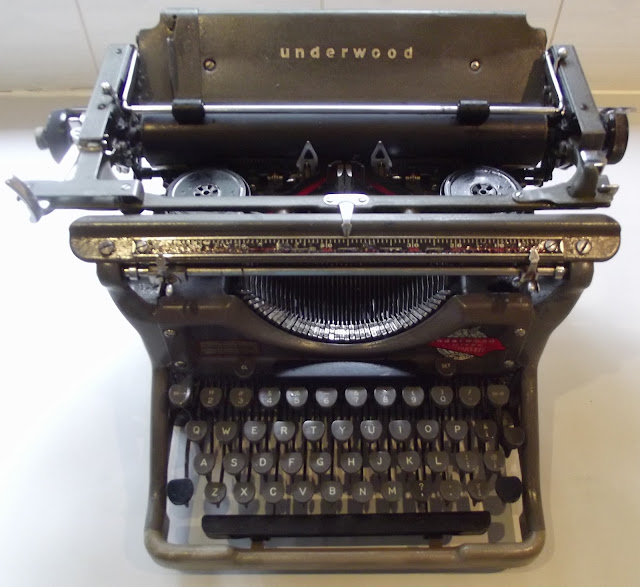 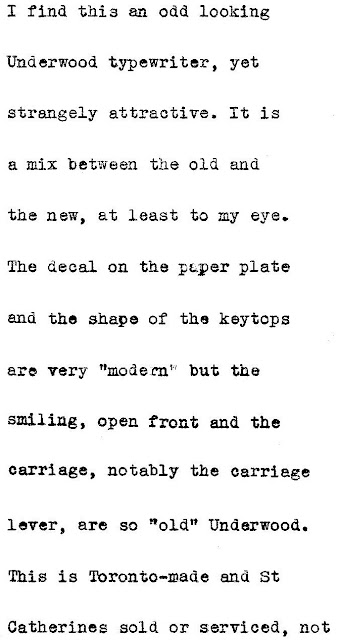 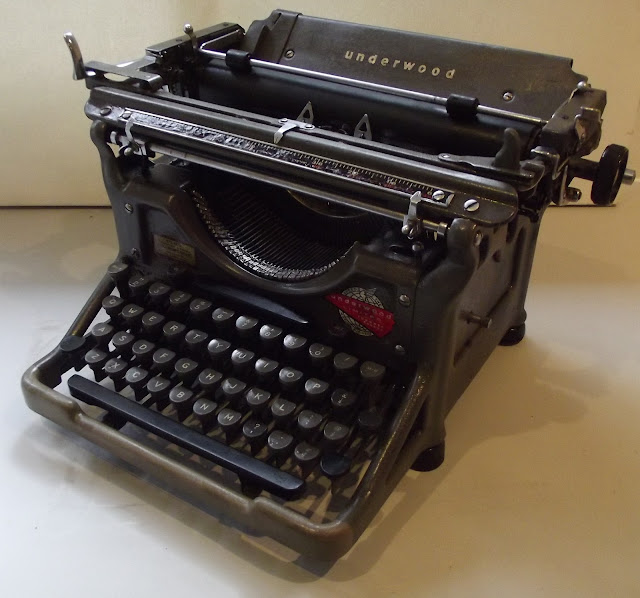 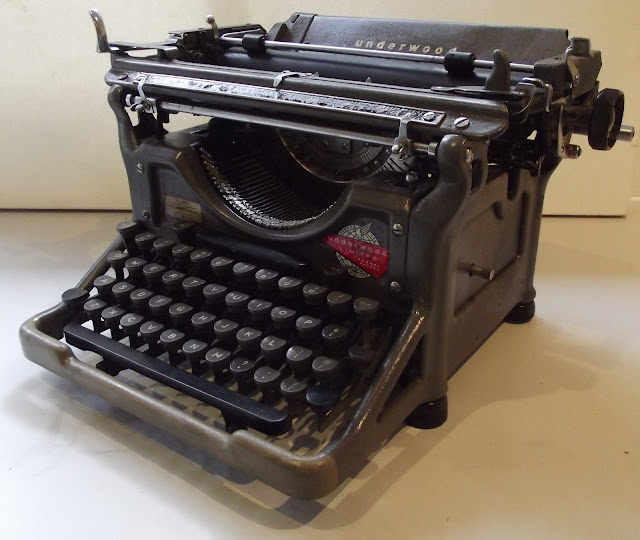 Posted by Robert Messenger at 09:30

Hello- In researching an old underwood I have pulled out of an old basement full of junk in the Washington DC area I found a very similar underwood. same labeling, open front, but keys with the metal circles around them. it has a 4,564,609 serial number - which is similar to yours and indicates a No. 6 built in 36-37. Mine doesn't have the made in toronto label and I can't find any production label - just a side badge for being property of the department of the Army. In looking at it - not being a typewriter afficianodo - I guessed it was made in the 30's or early 40's. I suspect it was used during WW2 in the Washington war buildup. Perhaps these look like hybrids because they were made for Govt. issue? Anyway, thanks for the posting. OH and after some clean up and oiling this thing types incredibly. My kids are having a ball with it. Love the old school technology!

How did I miss this post the day you posted it?

Great information Robert. I am searching for more information on my recently acquired Underwood Standard fro 1947.

It is the most fantastic typer in my collection. I've always preferred Underwood portables for their fine touch and fast action.

My recent addition is every bit as easy as an electric -- and without electic.

Glad to see an image online of the same model Underwood I have which you refer to as the Polk 1943. Mine is in the same condition, with the same slightly faded decals. I discovered the other evening whilst cleaning her that the front panel is removable exposing her "smiling gap." I have not seen another image of it anywhere online, but was able to date it among the 1945 "S" series at the Typewriter database website.Years ago I had another Underwood (which I used religiously) but it had bevel glass side panels. Have never seen another like it. Great site!

Glad to see an image online of the same model Underwood I have which you refer to as the Polk 1943. Mine is in the same condition, with the same slightly faded decals. I discovered the other evening whilst cleaning her that the front panel is removable exposing her "smiling gap." I have not seen another image of it anywhere online, but was able to date it among the 1945 "S" series at the Typewriter database website.Years ago I had another Underwood (which I used religiously) but it had bevel glass side panels. Have never seen another like it. Great site!

This typewriter looks to me like an Underwood Model 6 that got a makeover sometime in the early-to-mid 1950s or after, then put on the market as a rebuild. I've seen lots of older machines with anachronistically more modern decals on them. It's neat when I see an iteration of a typewriter from one time, yet decals and coloring that suggest another. I've even done that to a few typewriters myself. I recently bought a 1948 Remington KMC with lettering that suggested a Super Riter from the early 1950s. It was "continental elite," in that it was a pica-typewriter that had elite typebars installed. My guess was that a shop had cobbled together a typewriter from several parts machines to create a cheap set of keys for someone who needed a typewriter, yet didn't have the cash to buy a new one, or even a more recent original used "certified pre-owned" one. I tuned it up, and now I have a very handsome and a very smoothly operating typewriter, and my girlfriend espcially loves the print!

I just picked up what I believe is an Underwood 6 at a local consignment shop. It was $70 and, once I replaced the main carriage spring, works beautifully! I'm curious why it is so hard to find information on this model. I've seen user manuals and repair manuals for the 3, 4 and 5, but nothing for the 6. I know there are a lot of similarities among them, but the shift frame spring setup, for example, is completely different. And I believe the tabulator is as well (on my 6 you can set tab stops anywhere you want, which I don't think is the case on the earlier models).

I recently have gotten back into Underwoods! As a serious collector, we all have probably several early Underwoods.....and they are everywhere, and can be cheap.
But I recently have acquired several, war era, and beyond, SS and Rhythm Shift. and Rhythm Touch models. One was setting outside on a table of scrap metal, just rusting in the rain....and I had to save it! Well with lots of de-rust spray, and cleaning, it mostly works, and even looks pretty decent. It's given me a whole new perspective on these much forgotten beauties.....and I now have three of them.
I had read this posting, years ago, but it is wonderful to review it over and over, and it has a new importance for me, now. Thanks as always for your huge contribution to Our typewriter world!!

I am the granddaughter of Homer Cheun-Cheng LING, the engineer who developed the Underwood "Touchmaster" typewriter (1957). I recently came across extensive files of his research, photographs, original drawings, and other documents about his work with Underwood, along with several typewriters & boxes of typewriter components. I am in the process of digitizing and archiving his files to include in a biography I am writing about his life and accomplishments. If there is interest in the community of typewriter enthusiasts and historians, I will look into sharing as an open resource on the internet.

YES Ling Family Historian, yes please! That would be amazing!

My daughter has an Underwood given to get by my grandfather. The serial number begins with 479 to which I can find no matches. Any ideas?