A Cool Typewriter for a Hot Day

Like most of the rest of Australia, Canberra is in the midst of a heatwave, with temperatures in the high 30s Celsius (99 to 102 Fahrenheit) and low 40s (104 to 108). It's a good time to stay indoors, draw the curtains, turn up the air conditioning, and drag out some typewriters.
And what better typewriter to pick than the "cool" looking machine, belying its 40-year age, which is one of my latest acquisitions.
My own temperature rose alarmingly high one day last week when two typewriters arrived, one from England and the other from the US, and neither was working. The problem with the one from the US didn't take long to sort out. The carriage was jammed, and a close inspection revealed a large red cardigan button wedged into the escapement rack. Even after dislodging it, I could still hear a distinct rattle coming from within the workings, and decided to take the base off. That uncovered a large yellow thingamabob, plus a lot of dirt. Indeed, something seemed to be growing in the back right corner: 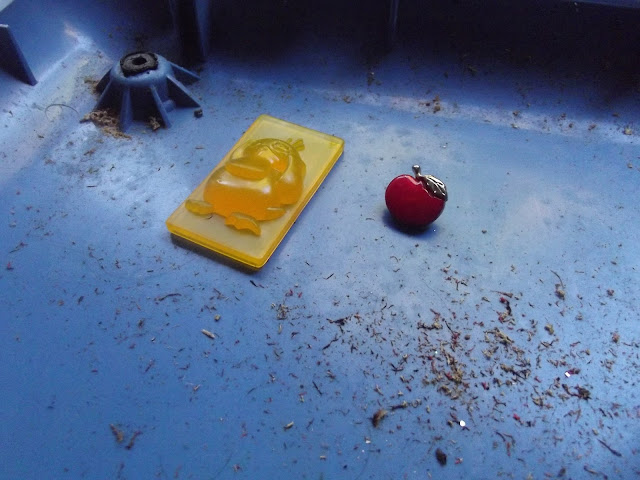 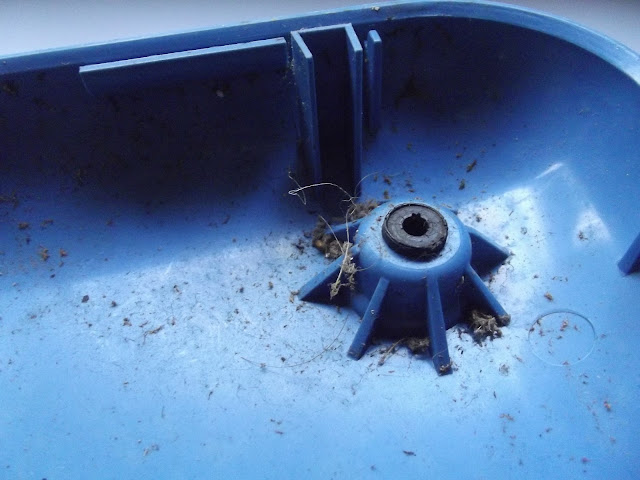 Have you been able to identify what typewriter this is yet? For me, the next interesting discovery was that, with the cover  off, I was able to instantly recognise the mechanics. 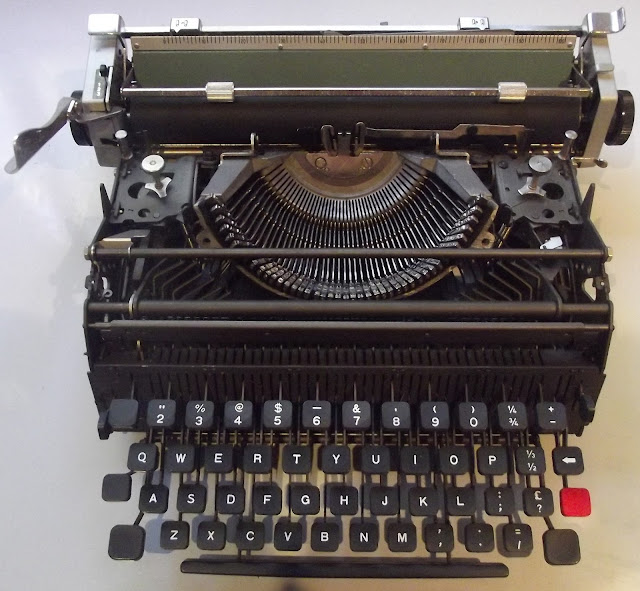 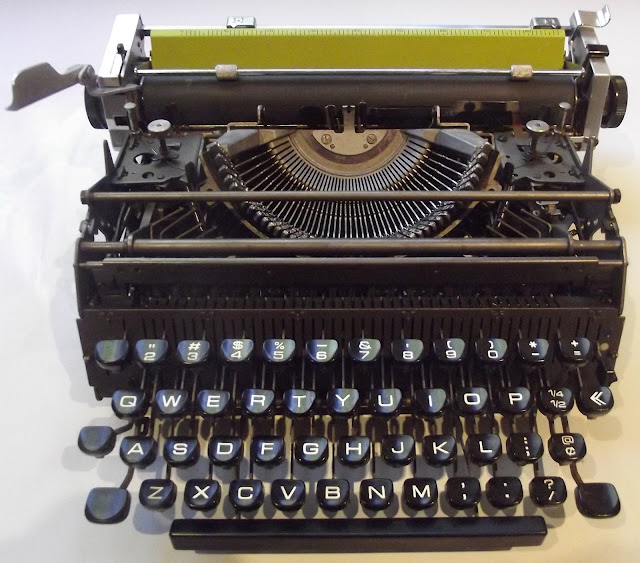 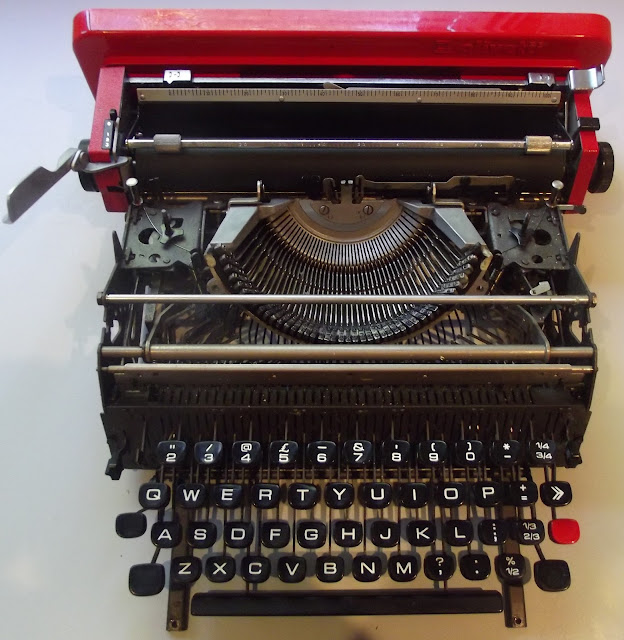 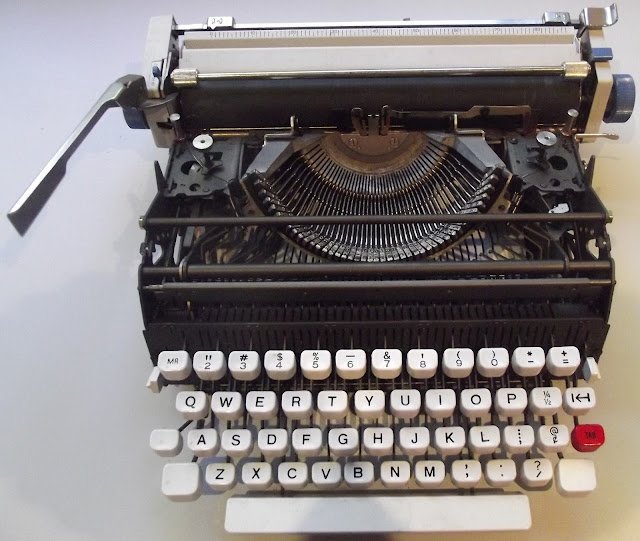 The 1973 machine which had the button and the thingamabob struck in its workings
One can see the mechanical design for each is practically identical. No wonder Peter Baker, last year, said of the fourth model that it "has that Olivetti feel" (Peter added that it was "butt-ugly").
If you are still trying the fathom what the fourth model is, the fact that it was launched in the United States through Zayre chain stores for Christmas 1973 probably won't help. It seems to have been widely assumed that this model came along much later - as much as 12 years later.
In 1973 it sold for as little as $39.99. These ads, which specify the typewriters were made by Olivetti (in Barcelona),  are from US newspapers from late November to mid-December that year: 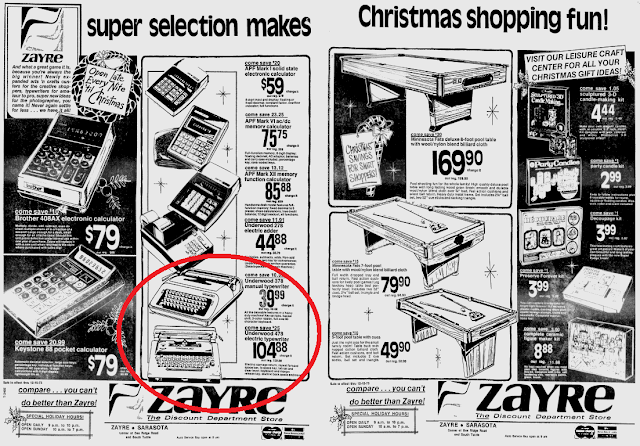 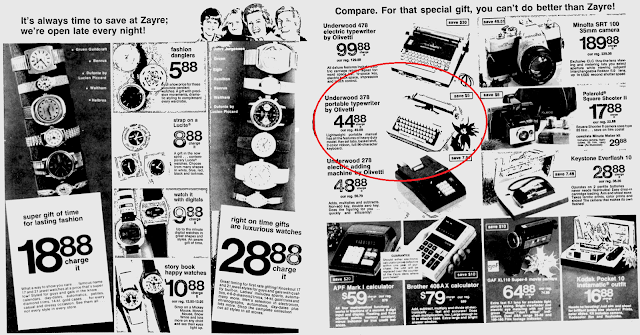 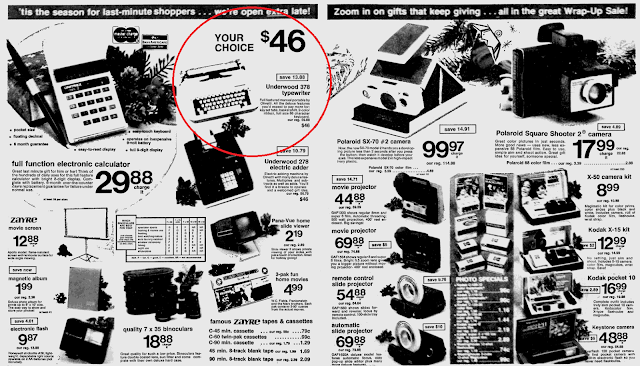 Yes, we're looking at the Underwood 378, also known as the Olivetti Lettera 92, the Privileg 350T (from the German mail order firm Meine Quelle) and the Achiever (from Sears). 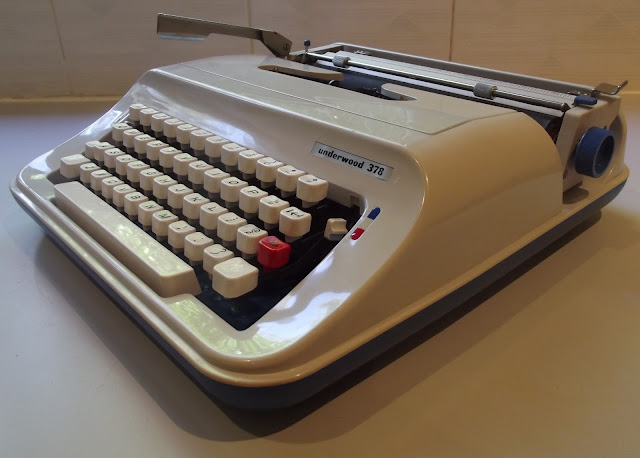 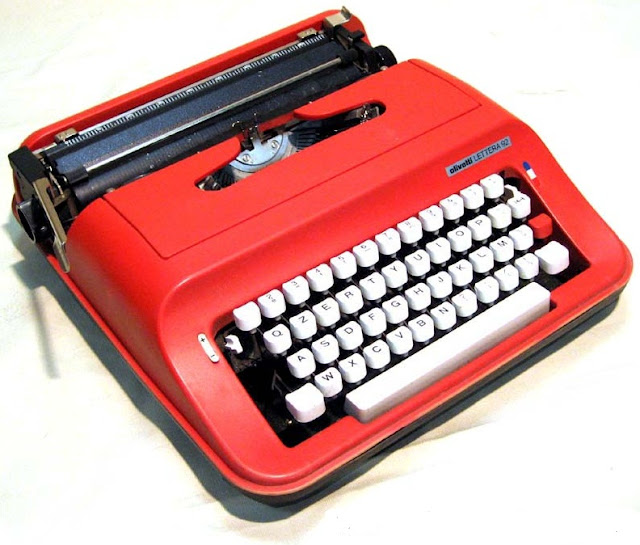 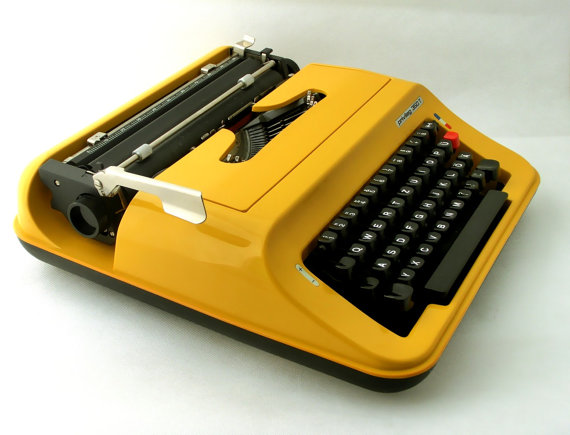 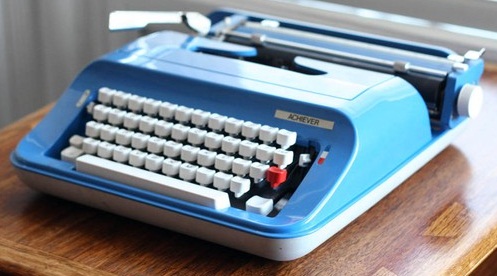 Another version is the Underwood 319, seen here from Alan Seaver's Collection at Machines of Loving Grace: 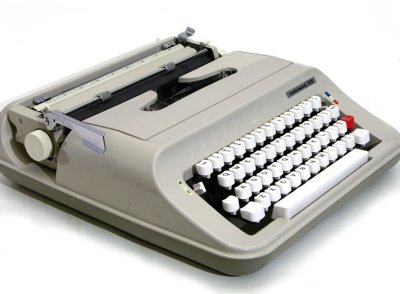 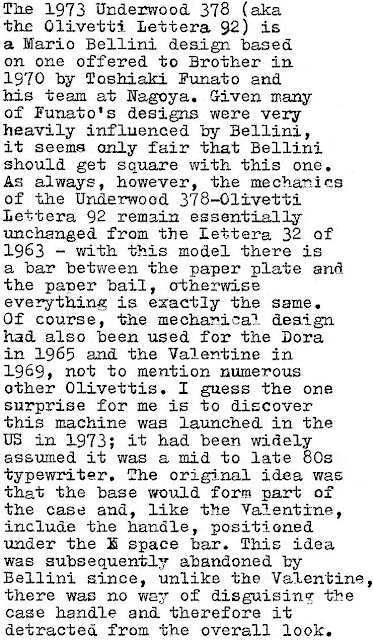 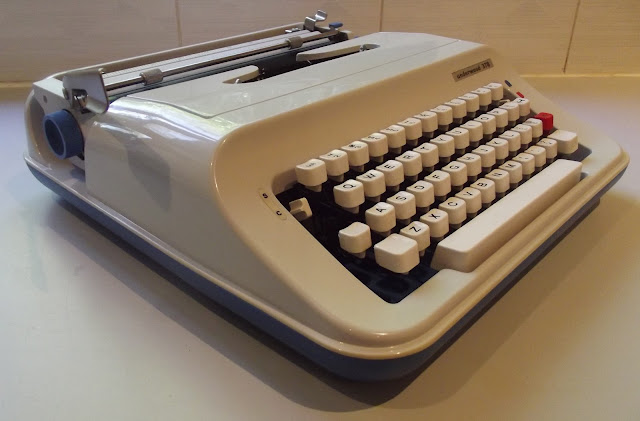 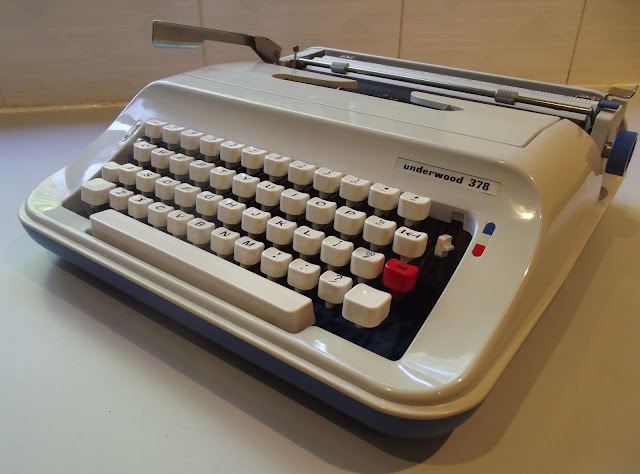 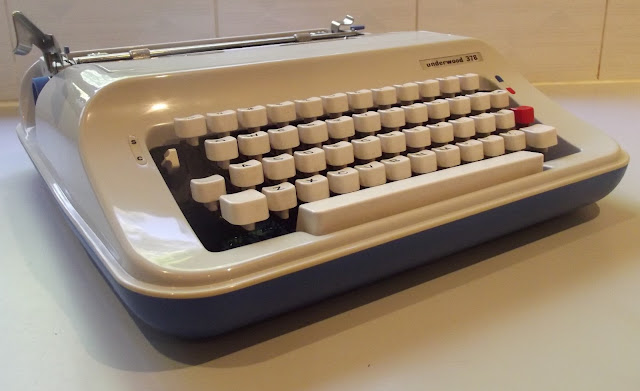 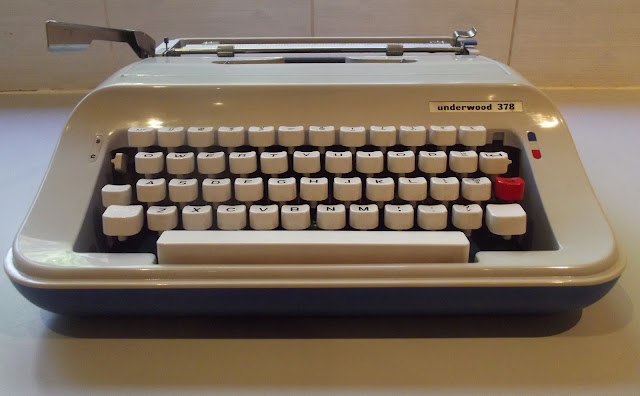 Posted by Robert Messenger at 11:45

Is it nice to type on?
It always amazes me that although mechanically very similar the Lettera 32, Valentine and Dora feel like totally different typewriters.

For a plastic typewriter, it's a good-looking object.

Keep cool, and spare a thought for those of us shivering in the midwestern US.

The yellow thing is a model of Psyduck, a Pokemon. Cool find within, I must say!

Thank you Jasper, Richard and Vikram - Vikram, so relieved, as I was worried you'd disappeared from the Typosphere!
Jasper, the difference lies in plastic v metal. The Underwood 378 types just like a Dora or Valentine. It's all about weight, distribution and balance.
Richard, not sure whether to sympathise over the weather. The heat zaps all energy. I think I'd be more productive in the cold. Maybe not?
As for the plastic 378, I did say back when I covered Underwood portables in a series that I would be tempted by this one, and for once the price was right (sensible). But you're right, it's all about looks, not feel.
Vikram, thanks for this info. Psyduck got headaches, right, and tried to stay calm. A lot like when this typewriter first arrived on a hot, frustrating day. But it was also called "downright silly", which may also say something about spending money on looks over feel. Then again, the platypus is one of my favourite creatures. Saw the Life of Pi last night, there there was no platypus in it (just as well!).

Stay cool and happy Olivetti typing. It gets unbearable here for most of the summer too. Been quite nice this winter though.

I like these plastic Olivettis, the Lettera 32 is one of my favorite machines, and these plastic ones like my buddy's Lettera 35 make great lightweight machines for carrying about and using in public. Since they are later models and less collectible they have a higher "expendability" and I would feel better about bringing them along to bars and such. I still need to find one someday for myself.