On This Day in Typewriter History: Smoke and Mirrors 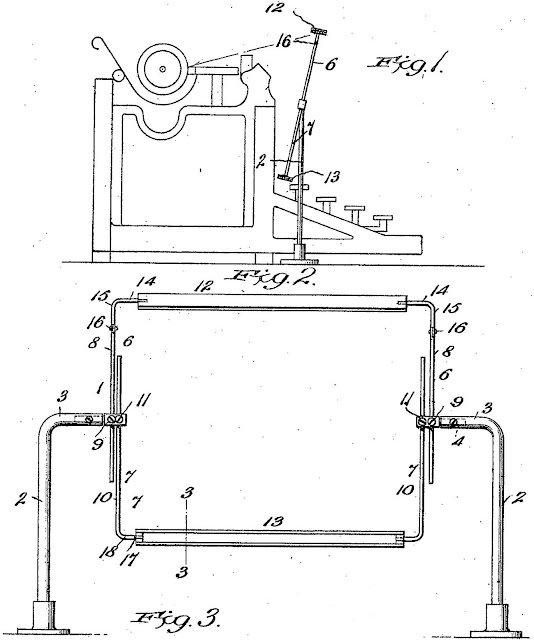 It doesn't seem terribly bright. And one has to wonder how much Herbert Loose Bright, an editorial lawyer with a law book company in New York, reflected on this idea, for which he applied for a patent on this day (January 4) in 1916. I'll let Herbie explain it himself:
"An object of the invention resides in the provision of means for minimising eye strain incident to the common necessity of shifting the eye from the keyboard to the platen or cylinder when the operator wishes to observe or verify the writing as it is placed upon the sheet. In view of this purpose of the invention, I have devised a system of mirrors correlated whereby the image of the writing or matter as it is placed upon the sheet may be exhibited prominently from the machine at a point in a common line of vision with the keyboard, and through certain peculiarities of construction it is found practical to cause the image of the writing to appear in a magnified or intensified state in order that it will be properly visible to the eye of the operator. Another object of the invention resides in the provision of an attachment of this character which will consist of a system of mirrors which are adapted to be individually adjusted whereby they may be made to properly accommodate themselves respectively to the platen or cylinder and the keyboard. Another object of the invention relates to a structure of this character which will include means whereby that mirror which is normally associated with the cylinder to receive reflections of the writing, may be conveniently adjusted away from the cylinder in order that the operator may freely manipulate the writing sheet as the occasion may demand."
Herbert Loose Bright was born in Berks County, Pennsylvania, on November 10, 1883. Later in life he went to work for naval architectural firm Gibbs & Cox.
Posted by Robert Messenger at 15:37