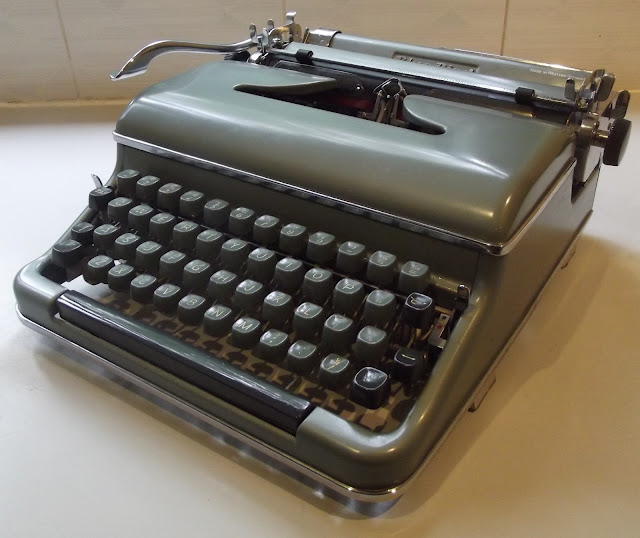 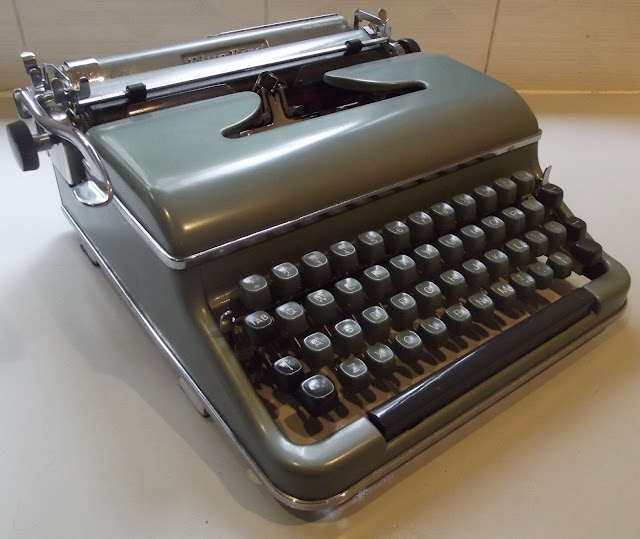 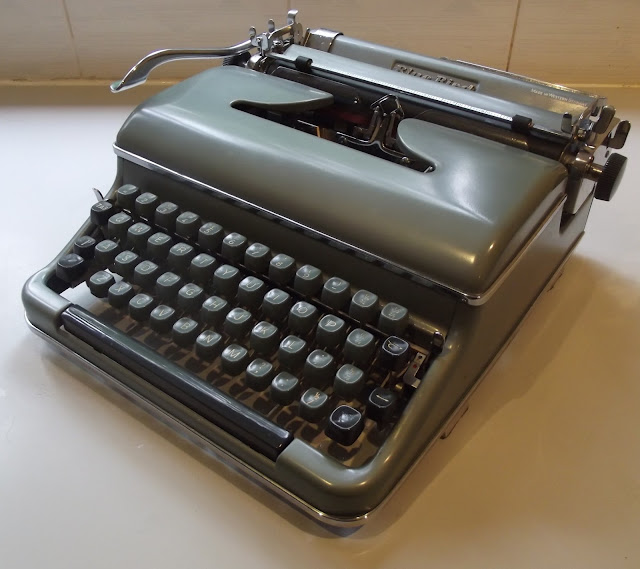 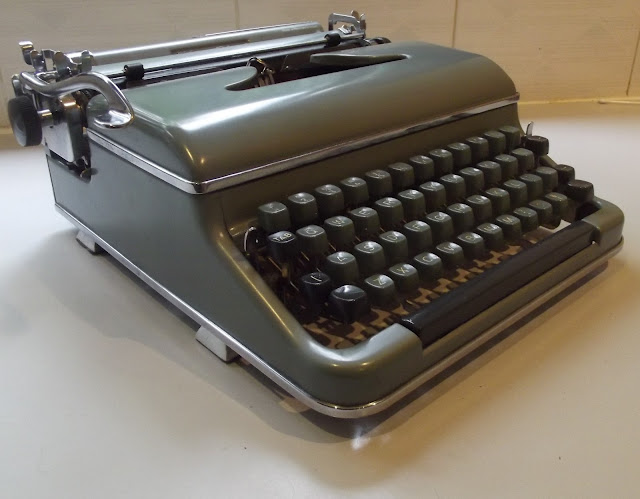 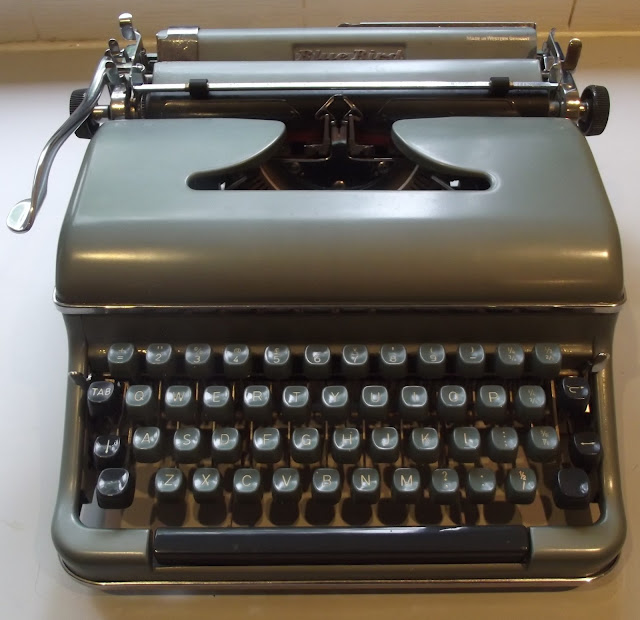 The Torpedo 18B has the tabulator, the 18 does not 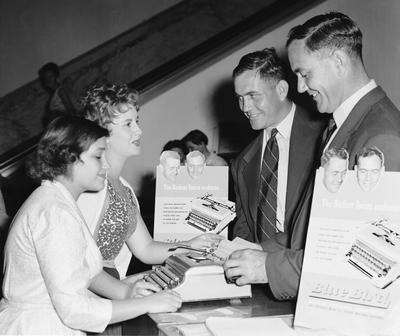 England cricketing twins Alec and Eric Bedser had a vested interest in promoting Blue Bird portable typewriters when they visited the Anthony Hordern & Sons store in Sydney on  November 10, 1955 (above).

The Bedser brothers’ association with Torpedo came about because of their investment in office supplies companies. In 1954, with a friend, Jack Fagan, they set up an office equipment store in their home town of Woking, south-west of London. They soon bought another shop in Staines, and then acquired Henry Baker Ltd, a small business off Ludgate Circus. In 1962 they went into partnership with Ronald Straker to form Straker-Bedser, with 180 employees and 25 shops in London and the Home Counties. By the time it was taken over by Ryman in 1977, Straker-Bedser had an annual turnover of £1.8 million. Shortly afterwards Ryman was bought by Montagu Burton.
Below, the Bedsers check out Blue Birds and other Torpedo typewriters in their Woking store, and Alec carries a Blue Bird portable as he and Eric set off from their home in Woking on a business trip to Australia. 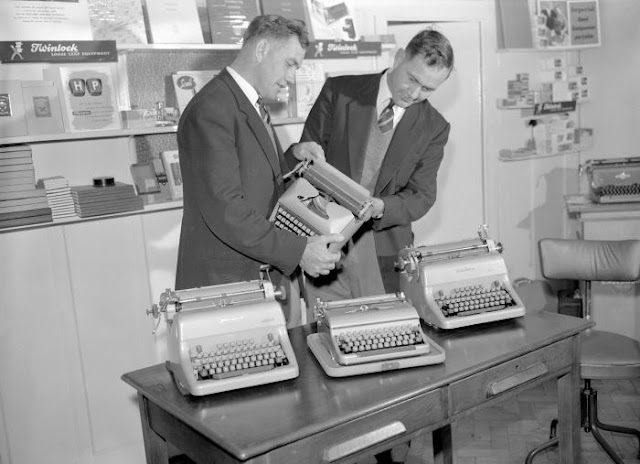 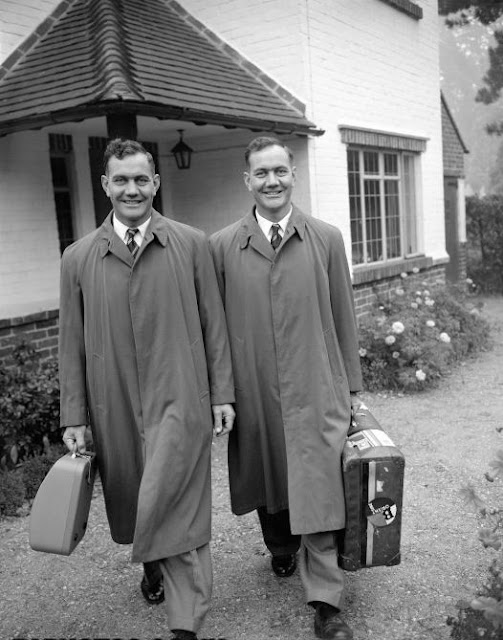 I couldn't resist this, either 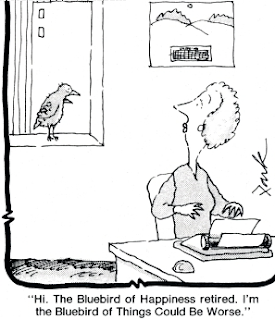 Posted by Robert Messenger at 10:33

That's a very handsome typewriter. If you recommend it so highly then I'll definitely add it to my list of future acquisitions. That is getting to be a long list that it appears will take some time before much of a dent is made in it. You're quite the inspiration Robert to knew typewriter enthusiasts like myself.

I have no idea why my iPad decided to change 'new' to 'knew'. If only I had been using my Underwood.

My Blue Bird was acquired for £3.50 from a charity shop six years ago and is a joy to use. Doesn't distract me from writing like t'interweb does either...

hello, thank you very much for this review, I have seen a bluebird on eBay which is in the most excellent condition and I have to say that I have been won over by the beautiful type quality. I have been enjoying your blog as I have now done a little bit of research into different brands and my google searches always come back to your site.

I learnt to type on an old olivetti when I was younger before word processers or computers were around and have been looking for quite a while for a typewriter, and I think this one fits the bill.

I hope to be typing letters to friends soon, in fact I plan to send out a monthly typed letter to subscribers instead of blogging, which I am so excited about

Very interesting and informative. I like the back panel made in Germany US Zone while the front says West Germany - now a unique statment on world history! I have just listed my Mum's Blue Bird on ebay Australia as we have no room for it.

Hi,
Can you tell me what the typeface is? Thanks.
- Corina

What a great post, even though I found it seven years after you made it. I just wanted to say thank you for these and also for your incisive blog on the Charlie Foxtrot website, which has really helped me in the purchase of two typewriters, one of them the wonderful Silver-Reed; it can be difficult when you can't try in person. Best wishes to you.