On This Day in Typewriter History: Moore's Transfer Typewriter 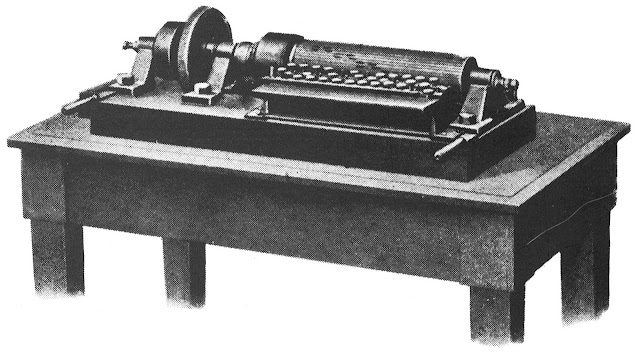 Mergenthaler's Rotary Matrix machine, developed from Moore's original design.
Charles Thomas Moore (born Connecticut, 1834), played a critical role in the development of the Linotype machine. Throughout a long career as a printer, compositor and inventor, however, Moore seemed to consistently view his work as coming under the heading of "typewriting machines". Indeed, he called his first significant invention, in 1869, a "transfer typewriter", though it was actually patented as an "Improvement in printing-telegraphs". Bear in mind it was patented before the typewriter became a reality, and long before the Linotype machine. 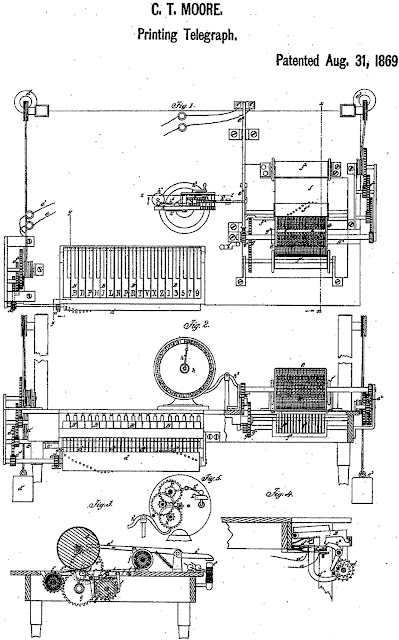 For all that, Moore's place in technology history in rooted firmly in the development of the Linotype machine, in which he worked closely with both James Ogilvie Clephane, Clephane's older brother Lewis Clephane, and Ottmar Mergenthaler, as Mergenthaler gradually turned Moore's original idea into the Linotype. 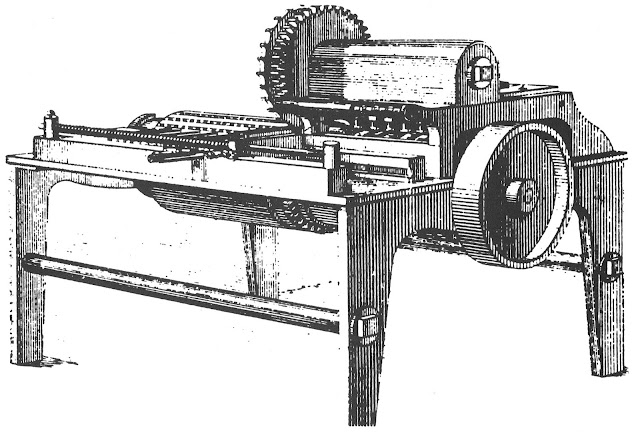 Moore's double cylinder typesetter
Essentially, Moore's invention was a typing machine designed to print characters in lithographic ink on to paper strips. The character impressions were to be mounted on a backing sheet and the words transferred to a lithographic stone for printing. It is said that Moore described it as "a typewriter for newspapers which was designed to eliminate type-setting by hand".
Frank J.Romano, in his 1986 book Machine Writing and Typesetting, quotes James Clephane as saying, in 1876, "I want to bridge the gap between the typewriter and the printed page." It would certainly seem as if this was also Moore's main objective in life. But Clephane's involvement with the typewriter in its earliest days, and Mergenthaler's ultimate success with the Linotype machine, means these two men are far better known today than Moore. 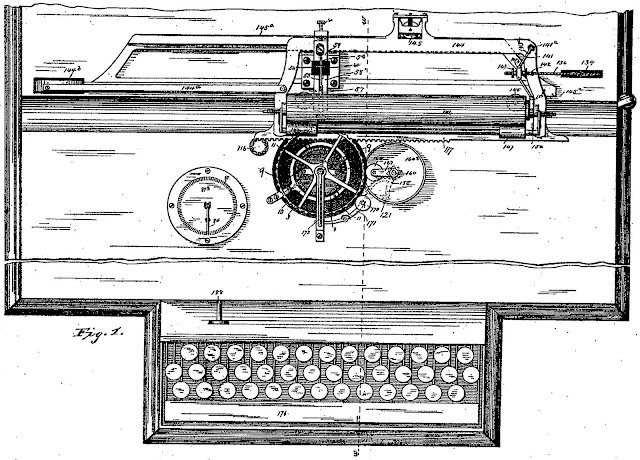 We will merely touch on Moore's work with Clephane and Mergenthaler here, since the development of the Linotype machine is a subject for other historians.
Our interest in Moore primarily concerns two 1890s patents, one applied for in 1885 but not granted until 10 years later, the other applied for in 1886 and issued on this day (January 21) in 1890. Both are for "type-writing machines". The one issued in 1895 was assigned to the Capital Type Writing Machine Company, of Virginia. Although they come almost 20 years after Moore's "printing-telegraph", however, they are clearly extensions of that earlier work done by Moore. 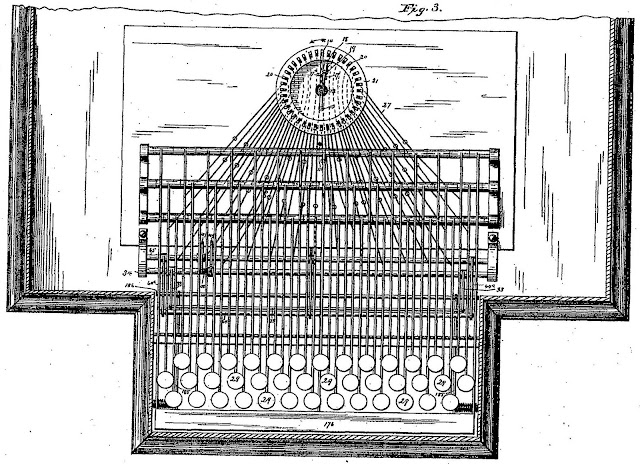 Of his 1890 design, Moore wrote, "My invention has for its object to provide a type-writer in which the types or characters employed are of variable widths, like ordinary printers' type, in which the spacing mechanism is constructed to feed the record each time a key is struck a distance corresponding to the width of the character printed by the striking of such key, and in which the impressions are made directly from the types or characters employed and by the aid of ordinary printers' ink. In a word, my aim is to provide a machine which will turn out work exhibiting that clearness and uniformity of impression and accuracy and regularity of spacing found at present only in printers' press-work." 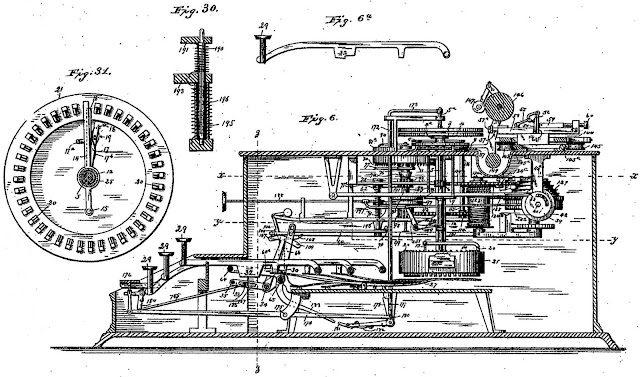 Romano says Clephane had, some 20 years earlier, contacted Moore after finding Moore's "printing-telegraph" patent in the patent office in Washington DC. Later, however, Romano says, "Moore had tried his hand at inventing a typesetting machine. In 1872, his Double-Cylinder Typesetter was patented ... He called the machine a "transfer typewriter" ..." In fact, Romano must be referring to Moore's 1869 "printing telegraph", as there is no 1872 Moore patent. 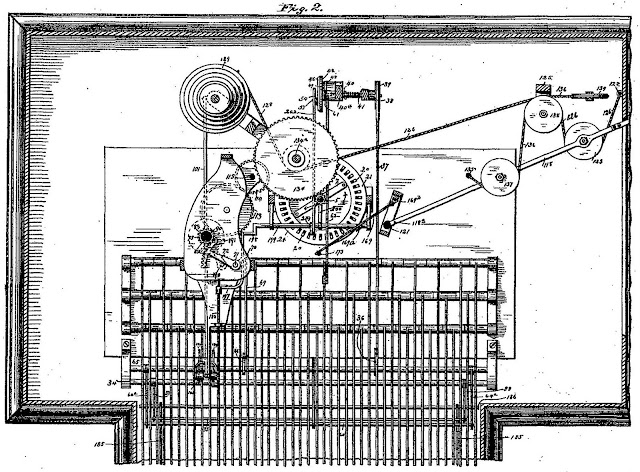 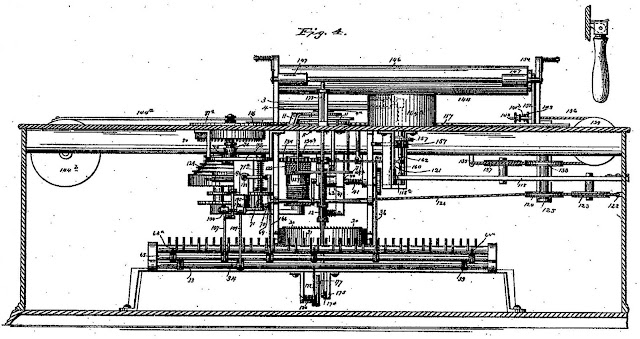 Similarly, in his 1997 book Antique Typewriters, Michael H. Adler says Moore was issued with "An 1876 patent for a typewheel device ... a quarter interest in which was assigned to a shorthand reporter called James Ogilvie Clephane who was better known for having conducted some tests and trials on early Sholes and Glidden machines, which performed so poorly that it may well have promoted him [Clephane, Adler presumably means, not Moore) to turn his thoughts away from typebars in favour of the typewheel."
The patent to which Adler refers, however, was applied for in 1877 and issued the following year, and was assigned not to James Ogilvie Clephane but his brother, Lewis Clephane, along with one of the four main Moore-Clephane project backers, mining pioneer James Haskell Crossman.  This again was a "transfer typewriter" to make matrices for printing, an idea James Ogilvie Clephane took up in an 1883 patent he assigned to the National Typographic Company, of West Virginia (this became the Mergenthaler Printing Company in 1885). Along with these organisations, Moore was also connected with the American Planograph Company, of which he was president, and the Moore Printing Typewriter Company. 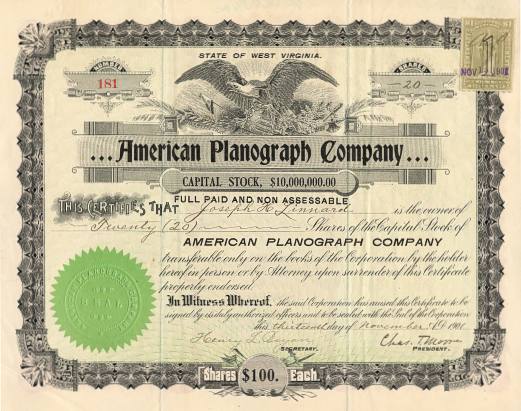 Moore's signature is on the bottom right of this share certificate
By 1876, Moore had started working with Mergenthaler. Romano says they met on August 17 that year. "Moore and [James] Clephane were to be the spark that ignited the genius of Mergenthaler". Moore and Clephane had demonstrated Moore's machine in Baltimore on July 6, 1876 [it was made in Baltimore by a man named Grant],  before the two attended the Philadelphia Centenary Exposition to check out the typing and printing machines exhibited there (including the Sholes & Glidden). Romano says Mergenthaler recognised likenesses between Moore's machine and the Sholes & Glidden. "Both used finger keys and metal characters to print directly on paper ... Moore admitted that Clephane had formulated the principle after seeing the typewriter." 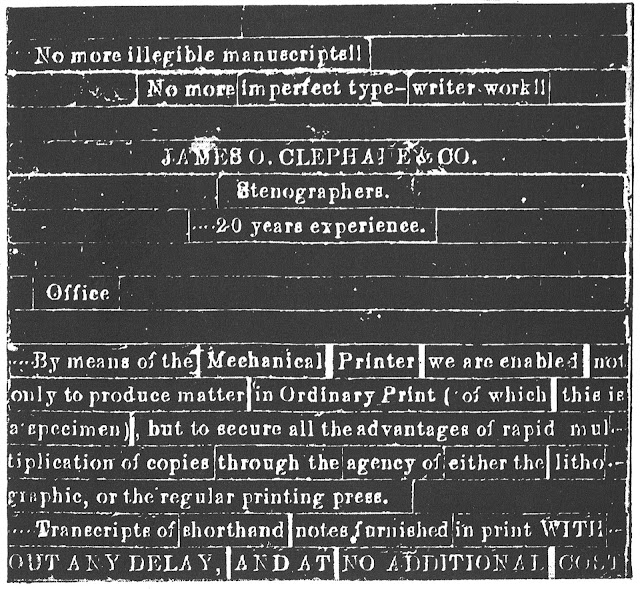 While, in the mid to late 1880s, Mergenthaler and Clephane continued to work on perfecting the Linotype machine, Moore returned to his typewriter designing. This is his 1895 patent: 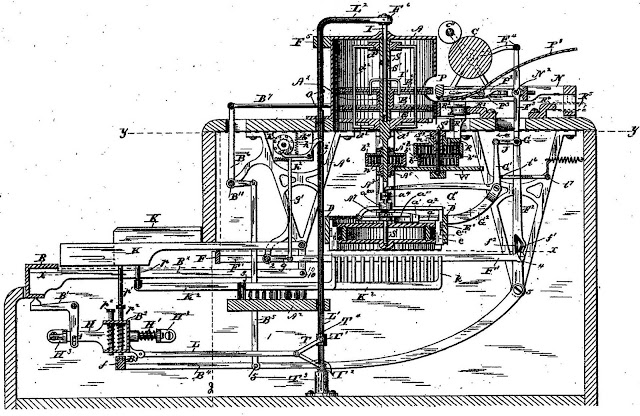 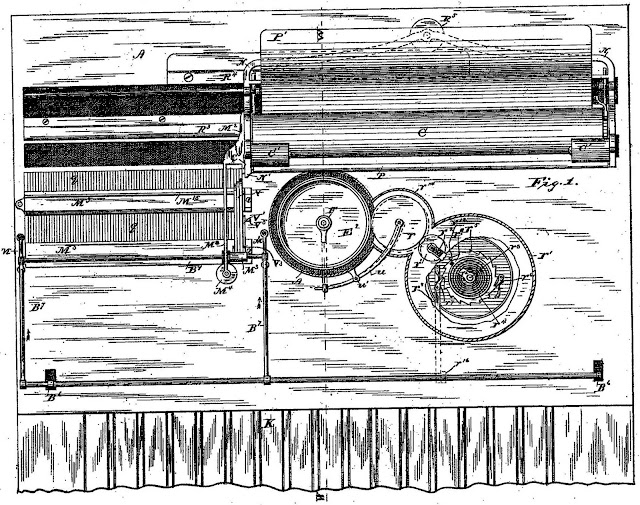 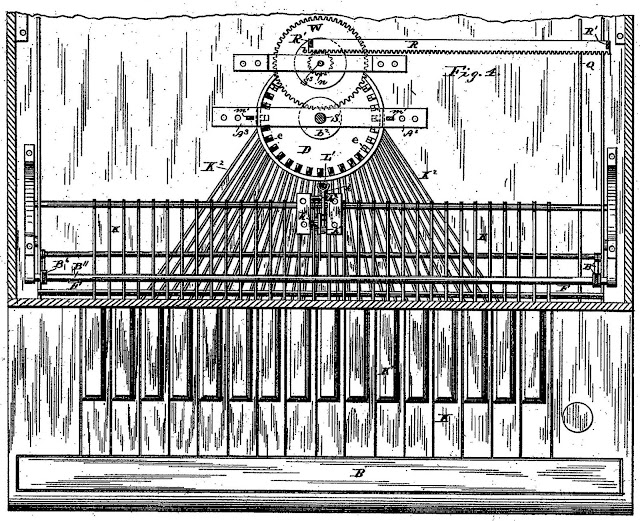 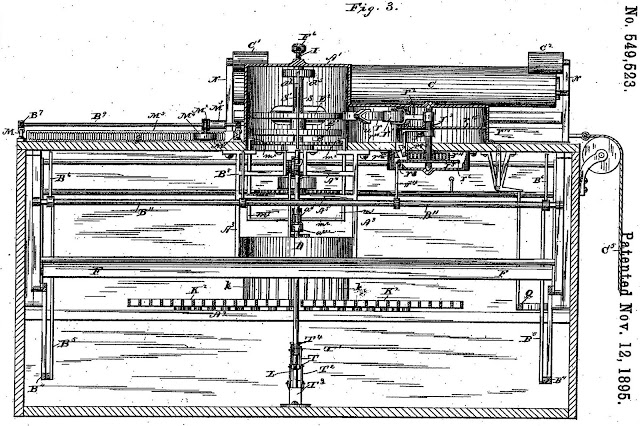