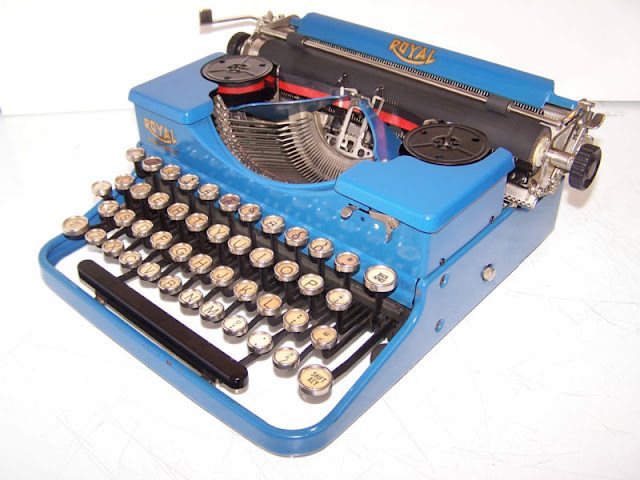 Yes, when it comes to buying typewriters on eBay, I can often be a total ass. Ergo, like an ass, I also often bray. That is, protest, grizzle, moan, or any other sound associated with the burden of being an ass.
I weathered the heatwave, the violent thunder storm, the extreme pain of RSI from over-blogging (which stopped me blogging at all for four days), all the while buoyed by the thought that winging its way to me from McCordsville, Indiana, was the most beautiful pale blue Royal portable typewriter. 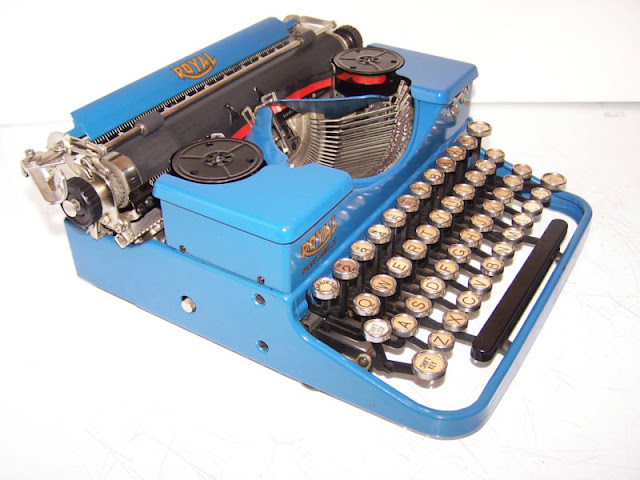 I fell for it the moment I saw it listed. I know, I'm a complete ass when it comes to such things, but I just couldn't resist it. I had never seen an early Royal portable in such a vibrant colour. Yes, I checked the listing description and the seller said this was an original factory colour. This guy (Tom Kern, trading as "Rogue 1810") sells typewriters from The Typewriter Place, so I figured he knew what he was talking about when it came to typewriters. An instruction manual was included in this irresistible package. 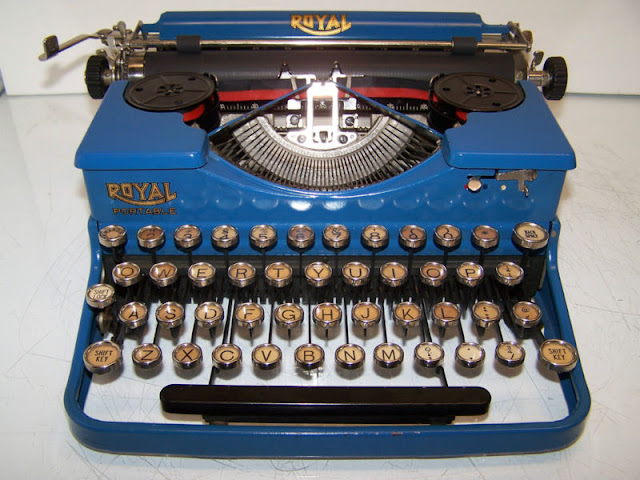 Yesterday afternoon, a small parcel arrived. I knew straight away something was very, very wrong. The USPS "large flat rate box" was 12 inches square by 6 inches high. It weighed 2.4kg. A Royal portable typewriter case is 12½  inches by 12 inches and 5½ inches high - and that's without any padding around it. A Royal portable in its case weighs 5.7kg, more than double the weight of this parcel. There's no way any Royal typewriter was in that box. 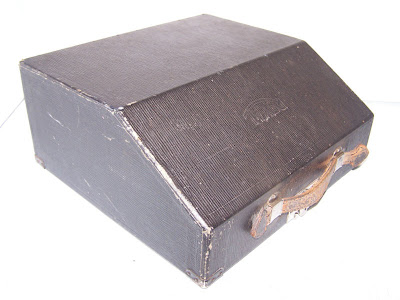 Sure enough, when I opened it I was in total shock. Inside was a burgundy Brevitype stenographic machine. 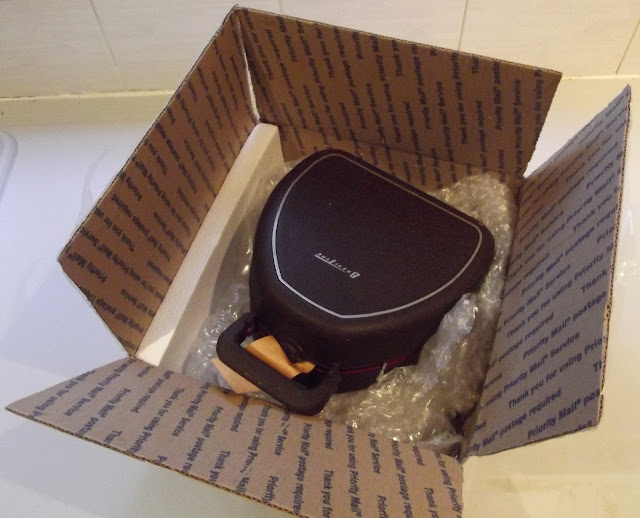 OK, I have received a full refund, and an apology. Still, this massive stuff-up raises some questions about an organisation which calls itself The Typewriter Place and which has been trading on eBay for close on 10 years and has received 2264 feedbacks for a 100 per cent positive record.

So a mistake was made, fair enough. But consider this: The USPS customs declaration dispatch note states the correct weight of the parcel - 2.4kg. That meant the shipping cost was $87.45, significantly less than the $104.50 I was quoted. The note states the parcel contains a Royal typewriter, when at that size and weight it most obviously didn't. Perhaps, if Tom Kern had thought about offering me a refund on the postage I'd paid, he might have realised an error had been made. Realised, that is before I notified him of what he'd sent me. 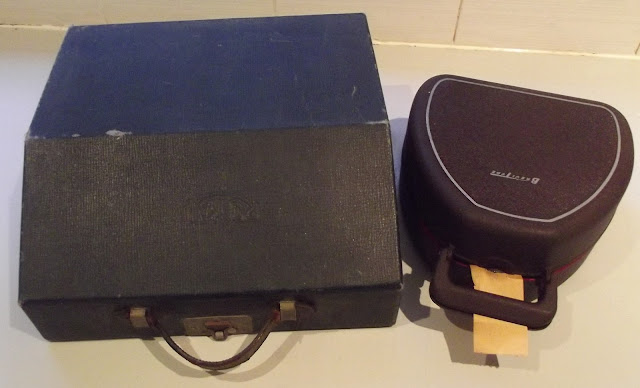 It turns out, I was told 24 hours later, that "my" pale blue Royal, serial number P109945, was winging its way to Romania, to an equally unsuspecting buyer expecting to receive a small parcel containing a Brevitype stenographic machine. The eBay auction for this latter machine, apparently a 1940 model, ended the same day I took the Buy it Now option on the Royal. It had a price of $149 on it, but a best offer was accepted. Even the original price was $280 below "my" Royal. There must be every chance the Romanian buyer will realise he has got himself a real bargain. 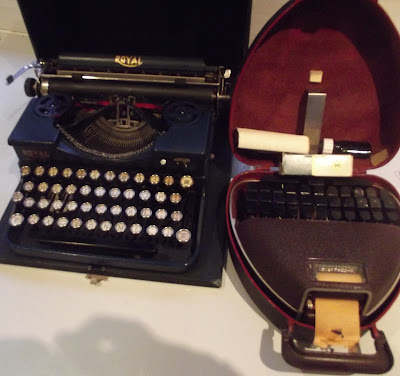 I'm resigned to the fact I will never now see this machine. And I'm not sure I would want to. Quite apart from the shock of opening the box with the Brevitype in it, I was appalled by the inadequate packing. When I checked Mr Kern's track record, I noted he received neutral feedback last September for a 1930 green Royal portable. " ...  not the best packaging, its arrived with broken parts," the buyer wrote.
The Typewriter Place claims in its listings that "We pad on all sides so the item does not contact the box." This is untrue, at least in the case of the Brevitype, as this photo proves: 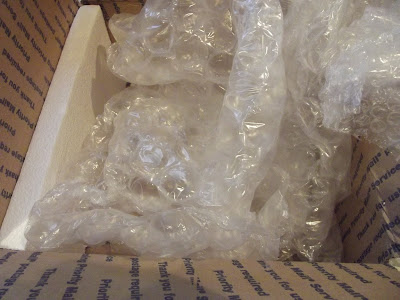 "Movable parts may be secured with stretch plastic." Untrue again. Note how the various things inside the Brevitype case have moved since the listing photo was taken: 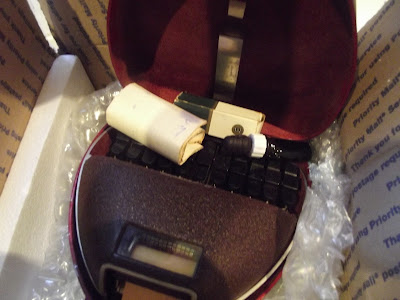 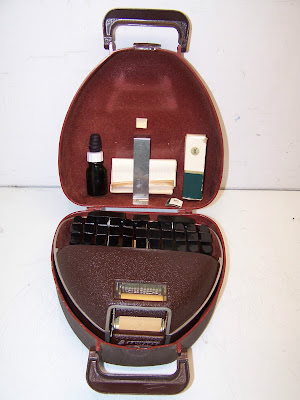 Tom Kern wants me to return the Brevitype to him. It will be hard to resist packing such a precious, delicate item properly, but as The Typewriter Place doubtless thought the original packing was sufficient, that's how it will go back.
eBAY LISTINGS
Some readers may recall the saga of me committing to a Buy it Now price last year on an Optima P1 portable typewriter that was listed by an eBay seller in Melbourne but which was, at the time of the listing, actually sitting in the home of incoming ETCetera editor Alan Seaver in Minnesota. 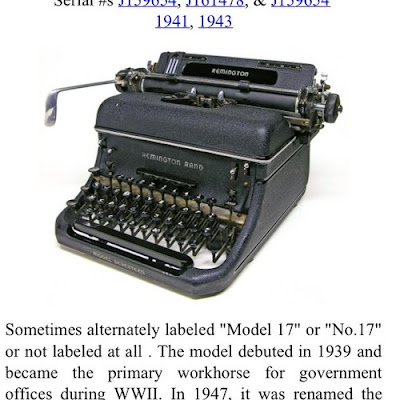 This was the image used to highlight the listing
Mr Seaver's typewriters have yet again featured prominently in an Australian eBay listing. A Remington standard which sold  this evening had as its lead image a printout of Alan's Machines of Loving Grace website. The second most prominent photo featured was from Charles Gu's myTypewriter.com website. 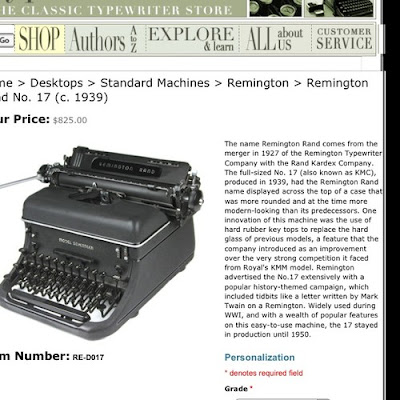 This was the second image in the listing
It was only when one got to the third photo that the actual typewriter for sale could be spotted. 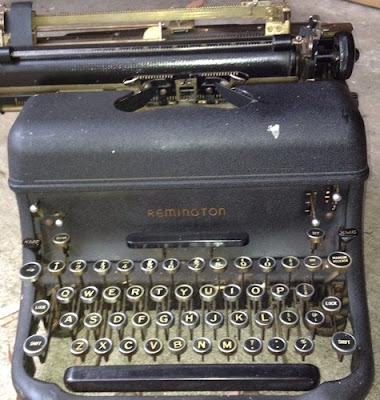 The actual typewriter for sale looked little like those owned
by Alan Seaver or being sold by Charles Gu
THIS IS WRONG! eBay has to do something to stop this nonsense. Happily, this typewriter only reached $10.50 after three bids, but the listing was most clearly designed to deceive. It's surely fraudulent to highlight in images typewriters which are not for sale.
The item description for this machine stated, "See photos for model description." In other words, look at Alan's or Charles's photos. The description then went on, "Missing top cover. I don't know much about these, all the keys work and the sliding part at the top slides easily and all levers work ... by 'missing top cover' I mean the cover that goes over the roller. If you have a look at the original photo [Alan's or Charles's, that is] compared to the actual item you will notice the cover on the top isn't there, it is still functional without it." 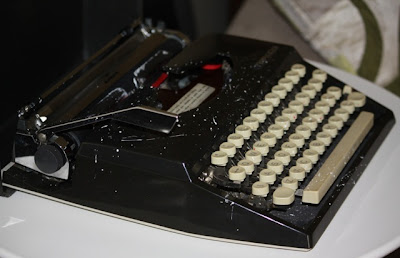 On a much lighter note, this black Adler Tippa has been listed. It's splattered with white paint. The listing says, "In good clean working condition, all keys work well and return to position. Has been splatered [sic] with white paint adds to the character and age of the typewriter. With a day to go, there have been no bids at $34.95. Seems no one is buying the "adds to character" line about a typewriter covered in specks of white paint. Hardly surprising! 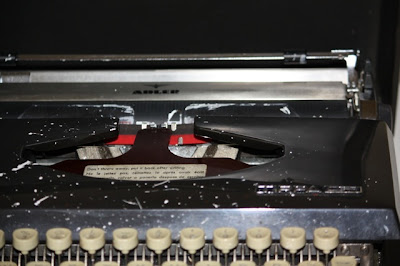 I'm so sorry about the Royal! :(
Hopefully the Romanian will be kind and return the Royal to it's rightful owner... You never know!
Keeping my fingers crossed for you.

That's just... completely stuffed up! I'm so sorry you had such a rotten experience, and have to send it back to them to boot. I wonder if the Romanian buyer would respond to the seller's message. Maybe he will. But the seller would've incurred unnecessary shipping costs just cos of that lack of a little care in packing and sending.

Sounds like this seller, if he gets both items back, has lost all profit due to the shipping expenses. That'll teach him to be more careful.

The mendacious and ludicrous behavior that you point out are all too typical of eBray, I'm afraid.

Ebay is rife with listings that feature "stock" or copied photos. In most cases the seller is too lazy to take the pictures themselves, but in others, it is intended to deceive. I feel your pain.

I knew the seller was not to be trusted when I saw he uses a wolf as his avatar...

... Now, seriously; I don't know if eBay has in place any kind of buyer protection policy (they should). If they do, you could take the issue to them and notify them about the extra shippment you're going to pay to return the item, and show them it was all the seller's fault. That way they COULD, SHOULD and probably WOULD press the seller to absorb the extra shipping costs, either reinbursing it to you via PayPal, or by sending you the item you bought at no extra cost, when and if he recovers it.

I think we've all had this kind of experience to some extent in our typewriter hunting grounds... it might be a good excuse to type a book of sorts (or at least an article for ETCetera: "Horror stories from the typewriter hunts" (hint, hint!)

Good luck with your claim!

Ebay is such a gamble these days. I often wonder if I'm secretly just playing the pokies, and not admitting it to myself. I don't like to actually gamble, but I do find myself throwing money at stupid things on there.

That said, what a balls-up. That blue machine looks great, but... far out.

Why is it always the Royal machines that stress us the most.

Sorry to hear about this ! I have always wondered why a seller for such an expensive typewriter wouldn't take some extra care in the packaging. It doesn't really cost much more or required more effort... really puzzling !

I've been buying and selling stuff on eBay like a fiend, since its earliest days in 1998. The miracle--as with so much in life--is that things go right as often as they do. And that's what keeps us in the game.

Behavioral science calls it an intermittent reinforcement schedule--one of the strongest yet most vexing means of establishing behavior we know. You're never certain whether you're going to win or lose, but you pays your money and takes your chances, and you win at least enough to keep you going and coming back for more. You have to lose pretty bad and often for the behavior to extinguish entirely.

We complain about computers and any other number of non-foolproof systems, yet just ponder the rapidity of processing of ones and zeroes or the grinding of gears that by and large reliably returns the result we hope for and expect! It's a miracle. Another sort of intermittent reinforcement.

As is our capacity for conducting ourselves honorably in the world at large. It's a miracle that we have yet to kill ourselves off entirely, be it on battlefields, freeways, or schoolhouses. Never mind correctly representing and standing by what we sell on eBay!

So I guess it boils down to having faith in our fellow heathens, that for the most part we can expect that each of us will do the right thing.

This post, as always, reinforces my strong belief that *I*, at least, will not buy typewriters on eBRAY.

I have been able to amass quite a collection without resorting to it, and I sincerely hope my resolve continues to be steadfast.

So very sorry to hear about this very major f***up, Robert!