On This Day in Typewriter History: Clipper Shop Typewriter 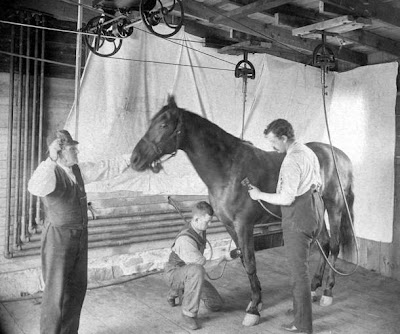 Inside Roswell Smith and Joseph Priest's Nashua 'Clipper Shop',
the American Shearer Company. Smith designed many of the shears used, including those used for sheep shearing.
After 24 years of patenting his vast array of ideas for tools and machines, and painting family portraits, in 1888 Roswell Tenney Smith decided to tackle typewriters in his "Clipper Shop" (the American Shearer Company) in Nashua, New Hampshire. 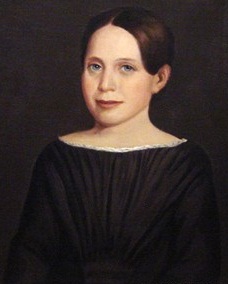 An 1858 portrait by Roswell Smith of Lucy Ober
He was issued with three typewriter patents, two of them on this day (December 30) in 1890. The final version of this index typewriter was patented in 1895. The last two (the second one of 1889 was for an improved version of the first from 1888) were assigned to George F.King, of Swampscott, Massachusetts. 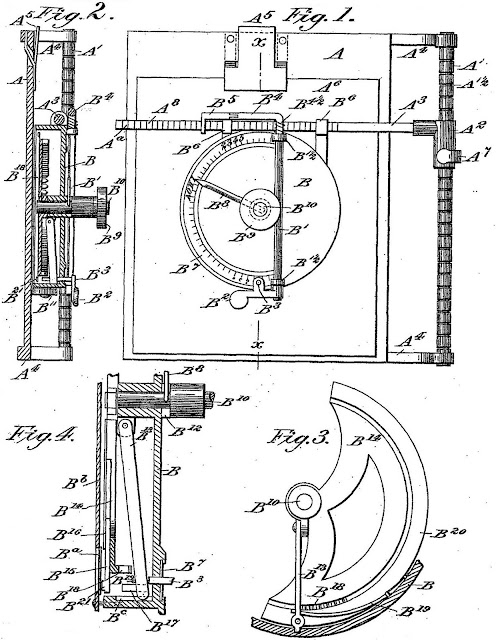 The improved version of 1889

The first version of 1888
Of his 1890 design, Smith wrote, "the purpose ... is to provide a printing mechanism capable of operating upon either an ordinary sheet of paper or upon the page of a blank book. It is my purpose also to organise a typewriter in which the capital and small letters are arranged side by side upon the index, making the selection less difficult and complicated. My invention also contemplates positive and simple means capable of certain action for advancing the carriage after each impression in order to bring the paper or page into proper position to receive the impression of the succeeding letter. It is also my purpose to provide a typewriter in which the type shall be mounted upon elastic arms or springs and to combine therewith hammers, which when operated will descend upon the type and strike them against the paper. Finally, it is one purpose of my. invention to so organise the parts of a type-writer as to permit the type to be mounted upon springarms in the arc of a circle, and to combine therewith simple means for projecting said type against the paper, each type-spring being capable of entirely independent operation." 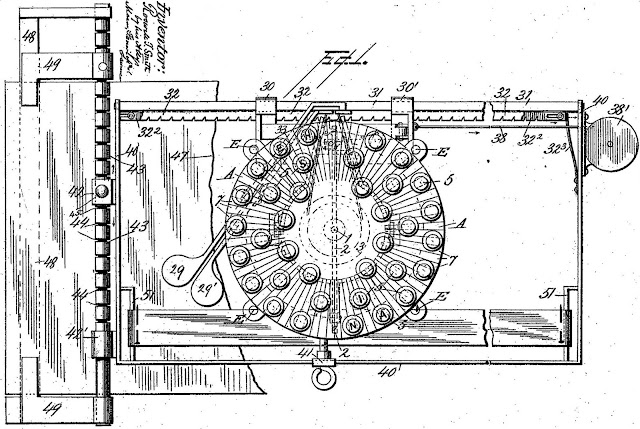 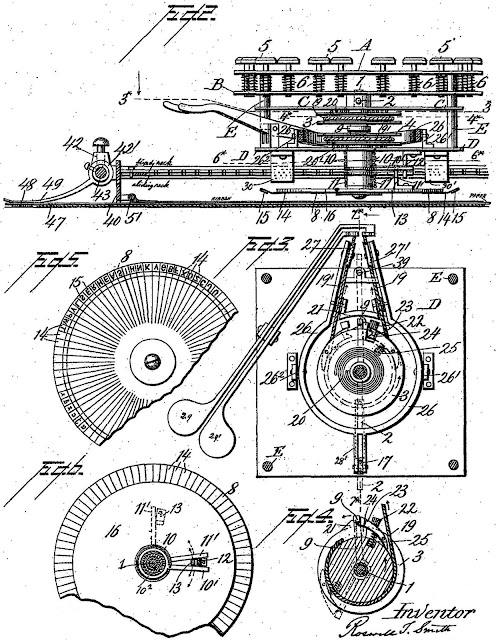 In 1895, Smith explained, "The objects ... are, first, to furnish a compact keyboard in which the keys will have but slight movement, and each key shall represent two characters, and arrest the movement of a typewheel at certain periods; second, to provide a device for giving rotation to the typewheel either to the right or left at will; and means by which the rotation of the typewheel may, in either direction, be arrested by any one of the keys in such a manner as to bring the letter upon the typewheel representing the letter upon the corresponding key directly within the action of a printing device; third, to provide a printing device adapted to act after the rotation of the typewheel has been arrested by the key; fourth, a feeding device by which either the typewheel and its connections may be fed over the paper or the paper fed in relation to the typewheel, the feeding device being essentially the same in either case; fifth, a device which furnishes power for revolving the typewheel in either direction, for printing and for actuating the device which regulates the feeding mechanism; sixth, a device for supporting the type carriage, for holding it in connection with a book, for holding the printing ribbon and performing other kindred functions required by the demands of the machine."
Roswell T.  Smith was born on  January 7, 1825, in Nashua, New Hampshire. He is most famous today for his Music Roll Perforating Machine.

George B. Kelly
The first pair of dedicated roll perforating patents in the archives of the Aeolian Organ and Music Company of Meriden, Connecticut, were taken out in late January 1880 by Smith and George B. Kelly, of Boston. Kelly's patent illustrates the process of making stencil rolls and Smith's rather sturdy machine shows how the stencils were then used for production on a larger scale. The scaling of the music rolls was the early standard of 14 notes, with essentially square perforations. Roswell Smith's Music Roll Perforating Machine
The idea of the flexible speedometer cable came out of Nashua as well, invented by an employee of the American Shearer Company – commonly called the “Clipper Shop” – which Smith and Joseph K. Priest owned at the time.

I want to be able to click a button, make Google Patents interact magically with a 3D printer, and have these inventions delivered to my home.