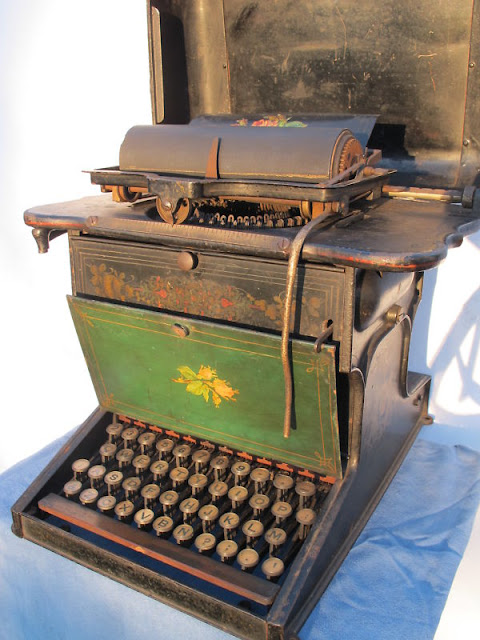 The Sholes & Glidden I mentioned in my Typewriter Update of January 21 sold on US eBay this morning for $US20,230 ($A19,353). The typewriter is apparently staying in the US.
As predicted - notably by Will Davis - the really big bids came in a flurry right at the end of the 10-day auction, with the price jumping from $12,780 to more than $15,000 then over $20,000 in the last few seconds. The winning bid was made with just six seconds to spare. It turns out a bid of $12,680 had been made on the opening day of the auction, on January 21. The starting price was $8600.
At that time, a comment on Facebook's Antique Typewriter Collectors group suggested "$10,000 is a lot of money for a S&G, after all it's an industrial product, there are hundreds of S&Gs out there". To which one Theodor Dampfknödel replied, "Good luck finding another of those 'hundreds' of S&Gs ... in my opinion, $10,000 is not unusual for a decorated S&G in good condition. Some bidder is already willing to pay at least that much." A very accurate call by Theodor, as it turns out.
Will Davis commented after the auction, "Twenty thousand dollars plus. Not bad. Not bad at all. Congrats to the seller and new owner, whoever that is!"
Posted by Robert Messenger at 09:43

I didn't expect that much, but it's ownership history was well documented and it had a very low SN (A1003), so it was probably the oldest model most of us will see for sale. Whether or not it was actually at the 1876 exposition is only a guess.

Yeah, I saw that the person who made that initial claim got comprehensively smacked-down. Quoting Wikipedia is such folly.

The association with the exposition was stated in writing in the 1930s by the family who aquired the typewriter from Sam Conde - long before Wikipedia. Also, Conde & Co was at the exposition. The provenance was availble for review to all bidders.

Conde & Co was a steam engine governor manufacturer, owned by Samuel's brother Charles. Just because his brother was at the Exposition on other business doesn't prove that the typewriter was there.

My post on the Alisov typewriter http://oztypewriter.blogspot.com.au/2012/11/on-this-day-in-typewriter-history_10.html points out only two typewriters, the Alisov and the S & G, were mentioned in the official report on the 1876 Philadelphia Centennial Exhibition, submitted to the British Education Department by one-time London Lord Mayor Sir Sydney Hedley Waterlow (1822-1906), the British Government executive commissioner at the exhibition. Waterlow was one of seven judges in the Paper, Stationery, Printing and Book-making section of the exhibition, along with James M. Willcox, president of Glenn Mills, Philadelphia, H. T. Brian, secretary of the Government Printing Office, Washington; C. O. Chapin, Springfield, Massachusetts; William Faxon, Hartford, Connecticut; Edward Conley, Cincinnati, Ohio; and G. W. Seitz, from Switzerland. The S & G mentioned was exhibited by John W. Bain, of 532 Walnut Street, Philadelphia. Bain was an agent for Locke, Yost & Bates, “formerly of 168 Elm Street, Cincinnati, now removed to Walnut Street, Philadelphia”.

That is not to suggest, of course, that other typewriters weren't there. Various sources claim the Pratt Pterotype and the Hansen Writing Ball were also exhibited.

Yes, I am of exactly the same mind as you. My gut feeling is that only one S & G was exhibited. I felt all along that the link was a bit tenuous.

I think that if the sellers were serious they should have contacted one of the larger auction houses to see about a sale. Ebay is fine and all, but with a professional auction house the value might have been higher. I just think when you get into paying $20,000 in an on-line auction the chances of that sale falling through are pretty high.

To answer some statements:
1. Alan is correct that Charles Conde and Co. being at the exhibition with their display does not prove that Sam Conde himself was present or was involved in the typewriter display. While Sam Conde was connected to his brother’s company (his music states “Conde & Co” on it), his brother and sister lived in Philadelphia in 1876, and he was fascinated with typewriters, does not at all prove he was there. It is just a lot of coincidences for someone who relayed that his preserved S&G was from the Centennial – but as Alan says, not proof. Unfortunately, there is no receipt or affidavit from Sam Conde or listing of serial numbers from 1876, and so the statements made in the 1930’s can be refuted, but I doubt you could find more connecting evidence with other typewriters than with what comes with this one.
2. Very good information on Bain. I spent much of my research trying to find if Rev. Sam Conde had any connection to Bain as a partner or financier, but found none. I would think it probable that Charles Conde and John Bain, both being Philadelphia businessmen at Machinery Hall had met each other, but I could not find definite evidence that links Bain and Conde.
3. A typewriter was also exhibited at the Centennial from Russia. The PA historical society tells me they have a photo of the Russian exhibit.
4. More than one typewriter was used to type the Centennial notes. I am told that Remington provided a picture the displayed typewriter for a book and it had mother-of-pear pearl inlay -- a collector in the US (Kansas) is said to have that unit (it is stated that the unit’s origins were from a Remington janitor who first took it with other machines to a dump as instructed, and later went back to the dump and retrieved it). But in considering if there was just one S&G on display, when I was studying pictures of various centennial letters and envelops posted on the internet, I noticed variations in the fonts. The Hagley library in Deleware also pulled for me a letter written May 1, 1947 to Remington, where Authur A. Smith describes his father’s recount of the Centennial Exhibit: “there was a railed in enclosure in which some of the typewriters were operated. Slates were provided on which you could write your message and for fifty cents they would type it.” Clearly, multiple typewriters were employed. There is also a December 22, 1939 letter in the same library where Elizabeth D. York says that both she and her mother were typists at the exhibition. It seems certain that multiple typewriters were used to keep up with the typing of the letters and envelops for the tourists.
5. I respect the understanding that the link could be considered tenuous, but folks do need to understand that this did not come from wikipedia. I have worked hard on the research and tried not to over-state any of the documents that were preserved with the typewriter – just that it was the belief in the 1930’s that this particular typewriter, A1003, was from the Centennial and that understanding was written down. It had been owned and kept by Samuel Conde, and when in Cleveland, the typewriter passed from his ownership to the Holwell family. While it seems plausible to me that if anyone was to have acquired a Centennial Typewriter, it would have been a rich typewriter entrepreneur of the time such as Conde; but I certainly cannot 100% prove that with any documents from 1876. I would welcome any more research. Glenn

Thank you, Glenn. Your point 3 relates to the Alisov typewriter, which I have already mentioned here.
Much of point 4 seems, to me, to relate not to Philadelphia 1876 but to Chicago 1893, the Columbian Exposition, which Remington in some small part sponsored ($10,000). Most of the information contained here relates to what I have read of the Chicago World's Fair. See my post on Bertha Palmer here http://oztypewriter.blogspot.com.au/2013/01/the-typewriter-reaches-americas-high.html

Thanks Robert. I neglected to say that the Authur Smith letter was sent to Remington with an original Centennial letter enclosed. The York letter also specifically mentions typing at the 1876 exposition. I am not sure of Hagley library rules if I can post those scans they sent me, but I could probably share them individually to you via email - for research purposes - if interested.

The family provenance does not mention anything about Chicago, though we know Conde was in the Chicago area around the turn of the century. I actually did research the theory that expositions were being mixed up - but I could not find any Conde link to that exposition - and if a Sholes was shown at Chicago (and I am told one was), it would have just been for display - not for typing. The family document from 1933 says "people paid 5 cents to have their names printed on this typewriter" which I don't think happened at Chicago.

Of course if this unit had been from the Columbia exposition, that would have been wonderful - those collectors are nuts - a soda fountain from that exposition sold last year in Baltimore for over 4 million dollars! Unfortunately, nothing indicates that A1003 was there.

By the way, on another comment someone made about "if the sellers were serious" - granted, eBay isn't the prime route for something like this, but good luck to those trying to sell something historic, it doesn't seem to work like TV. The folks in Baltimore were one of several major auction houses I did attempt to coorespond with. Several were terrible about returning emails and most seemed to know little or nothing about typewriters. So we went the eBay route with a very reputable seller who was very interested in the unit - it was a good fit.

By the way, I made that connection before I learned about Breker, but honestly - shipping the unit overseas to Germany for sale would have required more trust, cost, and coordination than the estate had to give - so eBay worked well. Of course those who choose to use it - the advantage is to the buyer (the auction is not extended as late bids come in).

Thanks again for those who helped with the research and for your postings Robert. By the way - I love your blog!