On This Day in Typewriter History: Radical Inking Alternatives 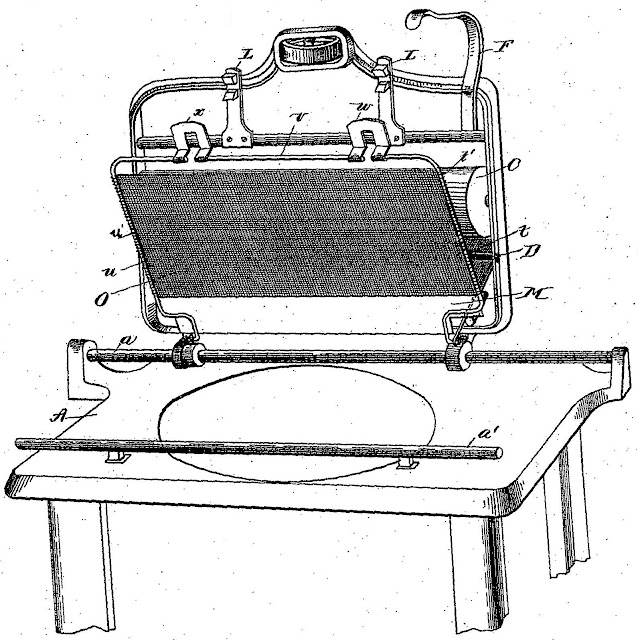 John Thomas Underwood (1857-1937)
Sadly, the romantic version of events which led, at the turn of the century, to the emergence of Underwood as one of the world's two leading typewriter manufacturers is an apocryphal one. Oh, if only it were true. The story goes that Remington informed John Thomas Underwood it would no longer require Underwood's supply of typewriter ribbons and carbon paper and would henceforth resume making its own. Underwood retaliated by deciding to make his own typewriter, which in relatively short time drastically reduced what had been Remington's completely dominant market share.

Franz Xaver Wagner
The truth has that much harsher tinge of the real commercial world. Underwood got his hands on the rights to market Franz Xaver Wagner's visible writer, not first-hand but third-hand, by means more foul than fair (to Wagner). In these circumstances, perhaps Underwood gave currency to the ribbons and carbon paper version to cast himself in a somewhat more favourable light. 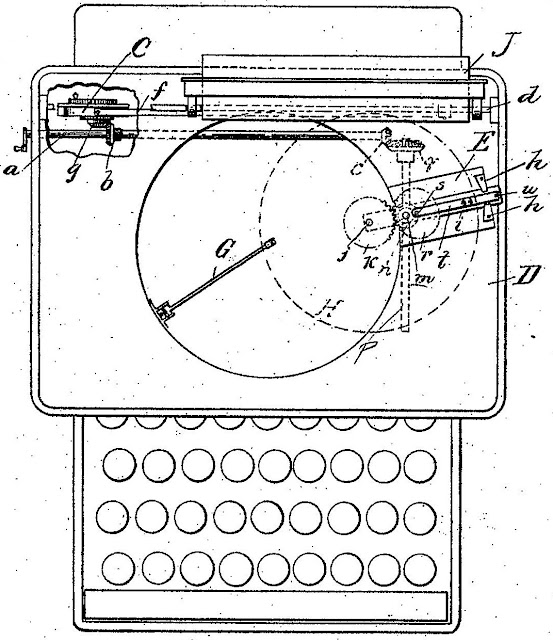 While all this was going on, in 1896 Lee Spear Burridge and Newman R.Marshman made three attempts, all patented on his day (January 12) in 1897, to c0nvince Underwood to not make a different typewriter, but instead abandon typewriter ribbons altogether, in favour of something radically different. One was a disk of inking fabric, another a roll of inking fabric, and the third a pod of ink pushing out over the typebasket, against which the upstrike typebar brushed on its way to the paper on the platen.

Lee Spear Burridge
This last idea, of course, was later developed into one of the key distinguishing elements of Burridge's frontstrike Sun No 2. The first two were pretty quickly ditched by all concerned. Burridge and Marshman had described them thus: 1. "The object of our invention is to provide a simple and efficient type-writing machine wherein a sheet may be employed as an inker and may be automatically and continuously fed by the operation of the machine proper so as to present a different surface to a printing-character after an operation of each of such printing-characters." 2. A "disk or other suitable sheet of textile fabric. This fabric is shown as perforated. The edges of these perforations are stiffened by washers. These perforations are designed to cooperate with propelling means for displacing the disk in the type-writer machine. At or near the periphery of the sheet is a stiffener, which, in addition to stiffening the edge of the disk or sheet, serves also to hold the textile sheet taut, and may also cooperate with propelling means for displacing or turning the disk, or both. We have used the sheet in a type-writer by interposing it between the printing agent and impression-surface of the type-writer, but it may be otherwise used." 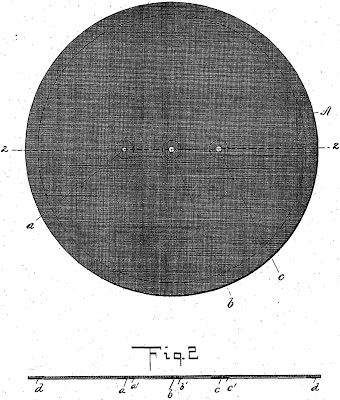 Since my last post mentioning Marshman, a descendant of this very interesting typewriter inventor and Burridge collaborator, a woman who is a professional genealogist, has been in touch with me offering to help try to lift the veil of mystery shrouding Marshman's life story. We now know Marshman was born in Manhattan, December 19, 1846. He is buried in the Poughkeepsie Rural Cemetery. We still do not know his middle name.
Marshman's descendant has provided some rare insights into Marshman's character with  excerpts from newspaper clippings. Here is one, from June 10, 1925: 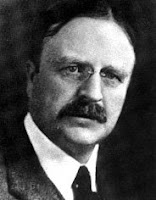 New York City Mayor John Francis Hylan (1868-1936)
"Hylan Shakes Intruder’s Hand.  Mistakes Aggrieved Civil War Veteran for One of Party of British Rotarians. Some thirty odd International Rotarians from the British Empire, who called on Mayor Hylan at the City Hall to-day, were dumbfounded by the presentation of an impromptu skit staged in the reception room by the Mayor, his police aid and an unbidden guest, Newman R. Marshman, an 82-year-old Civil War veteran, of 30 Macombs Place, the Bronx. The Rotarians – men, women and children – had gathered in a semicircle in the reception room.  Mayor Hylan entered and went down the line shaking each by the hand and asking some personal little question, such as to what city that particular Rotarian came from, but more generally “What do you think of New York?” “I’m from Yorkshire,” one man told the Mayor. “I’m from Birmingham,” said a little girl. “My home is in Liverpool,” exclaimed a woman. “I’m from Australia,” yet another one volunteered.
“I’m from the United States; I have written you three letters, and want to see you,” the last man on the line explained as the Mayor shook the aged Mr Marshman by the hand, thinking he was the last Rotarian to be greeted. A sudden silence fell on the room.  The Rotarians gazed with keen anticipation on the scene, obviously wondering what would happen.  The Mayor dropped Mr Marshman’s hand like a hot potato and signalled frantically to Captain Quinn, his police aid. Quinn gently escorted Mr Marshman to his seat and whispered into his ear a few words of such emphatic caution that Mr Marshman sat perfectly still until the Mayor’s reception had ended.  Then, at another word from Quinn, Marshman hobbled into the corridor leaning heavily upon his cane.
“What do you think of that Mayor?” he complained.  “I wrote him three letters and got no reply.  I wanted to see him, and when I do see him he turns me out.”   Mr Marshman declined to intimate the nature of his business with the Mayor, but indicated that despite the frigid reception to-day he still had hopes of an audience with his Honor."
Posted by Robert Messenger at 08:25