On This Day in Typewriter History: The Morris, Wichita's Elusive Jewel 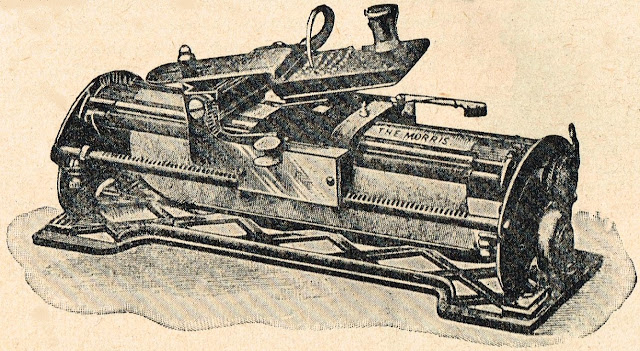 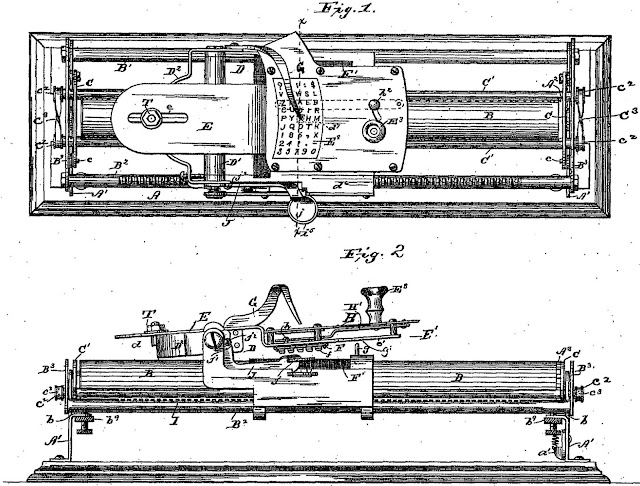 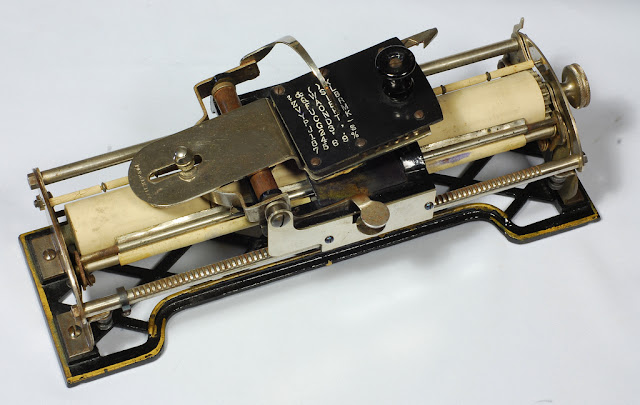 Martin Howard Collection
Wichita jewelry salesman Robert Erastus Morris was issued with a patent for his index typewriter on this day (January 11) in 1887, just one month before he died, aged 38.

Robert Erastus Morris's grave at the Highland Cemetery in Wichita, Kansas.
His wife Elizabeth is also buried here.
The Morris typewriter, fortunately, had already gone into production more than a year before Morris died - in New Haven, Connecticut in 1885 - and was selling for $15. Today one of these exceedingly rare machines is possibly worth close to 600 times that much.
Two-and-a-half years ago, a Mason City, Illinois, woman experienced the reality of every typewriter collector's dream when she found she owned one of these elusive jewels. The State Journal-Register, of Springfield, Illinois, on July 18, 2010, told the story of Nancy Himmel. 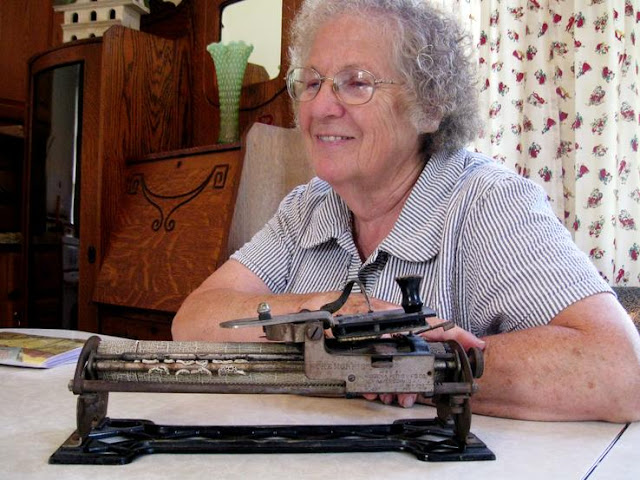 Apparently Nancy was browsing through books in the Mason City public library when by chance she picked up 1001 More Antiques Worth A Fortune, happened on page 474, and saw a photograph of a typewriter she recognised. She had one in her attic. It had belonged to her parents.
Nancy said, “I told the librarian, ‘I think I’ll take this one [book] home'." From the Uwe Breker Collection, on Paul Robert's website
As well as the book, Nancy referred to Paul Robert's website The Virtual Typewriter Museum (see here) and found she had one of fewer than 30 Morris typewriters known to exist. Paul describes the Morris as, "a beautiful but unsuccessful index typewriter. The type was placed on a rubber sheet, placed under the index card. By moving the index pointer the correct character would be placed above the printing point. By pushing the entire structure down, the character was printed on the paper. A very simple and elegant little machine ... "

Martin Howard Collection
Information about this typewriter's inventor, Robert Erastus Morris, is as scarce as his machine. Most genealogy entries claim he was born in his father's home town of Corning, New York, on April 28, 1848. The birth date is right, the birth place not. It's an error which makes tracing Morris's life quite difficult. Judging by every available census entry for Morris, he and most of his siblings were in fact born in East Fairfield, Pennsylvania, where Robert's father, Hiram Morris, went to farm in the late 1830s. Robert remained there with his family until 1870, when he was in his early 20s and he and his older brother Henry were selling jewelry. 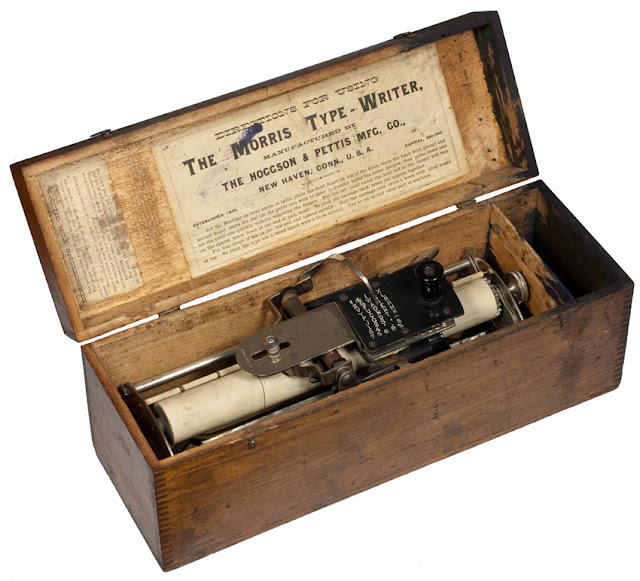 Martin Howard Collection
Robert and another older brother, John Benson Morris, shortly after decamped to Wichita, Kansas. That's where on July 21, 1871, Robert married a local woman, Elizabeth Wasson. The couple had five children. Wichita is also where, finally, in 1886, Morris got around to applying for patents for his typewriter in the US and in Britain. It seems he had made an earlier application but didn't complete that process, so there is no record of the pre-production design.
Just a month after being issued with the patent for his typewriter, on February 14, 1887, Robert Morris died, aged just 38. 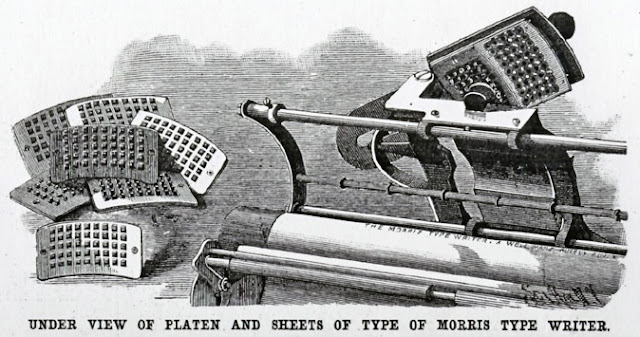 Martin Howard Collection
Martin Howard has a Morris in his wonderful typewriter collection and says it "is about as strange as typewriters got, not the least being a white rubber platen. The advertisement states that the Morris writes 70 words a minute. However, after trying the Morris out, I would be surprised if 12 words could be achieved." See Martin's entry on the Morris here.
The Morris typewriter was made by Hoggson & Pettis of 64-70 Court Street, New Haven, Connecticut, established in 1849 by Samuel J.Hoggson and George C.Pettis to make stencils and stamps. The company grew to manufacture engraved rifles,  "Sweetland" lathe chucks, bank and ticket punches, Morris typewriting machines, cutting dies and rubber goods and to cut, form, trim and press sheet metal and cut boots, shoes, cloth, leather, paper and rubber goods. It held a patent on enamelling paper and made organ stops, knobs and stems. 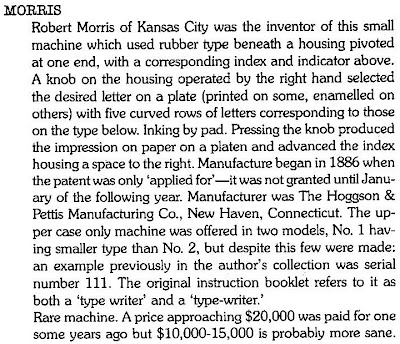 Michael Adler's entry on the Morris. Adler, Ernst Martin, Paul Lippman (see below) and many others are wrong about Morris being from Kansas City. He never lived there. He lived until the age of 22 in East Fairfield, Pennsylvania, then moved to Wichita, where he remained until his death.
There have also been slight exaggerations about the extreme degree of the Morris's scarcity. At one time only four were thought to exist, but it now seems about 24 still do. A Morris was sold by Christie's of London in 1993 for $US8126 (which would equate to an awful lot more 20 years on). This machine's British sales agent had been H.J.Griswold of Leicester. 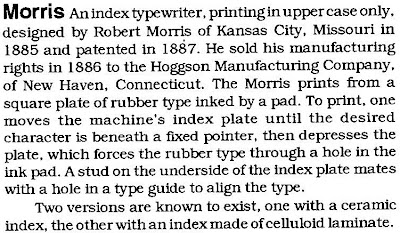 Nice thing to find in your attic!

Thanks for clearing up some of the historical record. I would be remiss if I didn't mention that Martin published a story about the Morris in ETCetera no. 83.