On This Day in Typewriter History: The Improved Edland 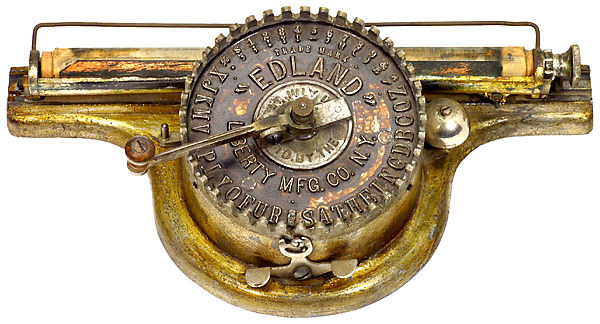 The original 1891 version
On this day (January 3) in 1893, Swedish-born machinist and mechanic Joseph Lawrence Edland was issued with a patent for an improved version of his 1891 index typewriter. 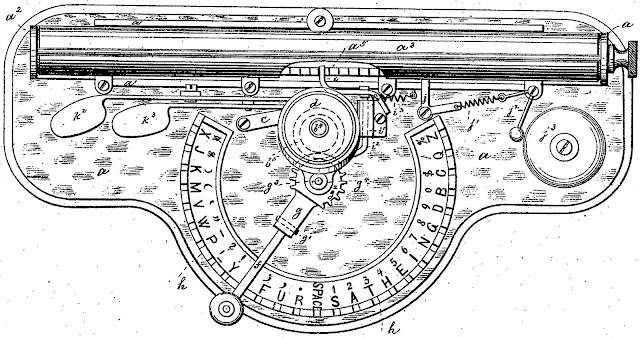 The 1893 version
Edland, of Brooklyn, assigned the updated design, which incorporated two shift levers (Edland called them "forks" to lift the typewheel), to John Mathew Van Orden, a Newark corset manufacturer. It seems the second model, which also had broader base, a flat index and a changed pointer format, was made, though very few still exist. 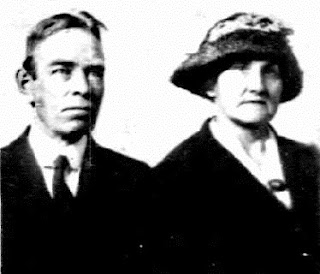 A 1922 US passport photo of Edland and his wife
Edland declared his original objective was “to produce a type-writer of few parts which is specially adapted for private use, and which may be easily and correctly operated by one who is not familiar with type-writing”. 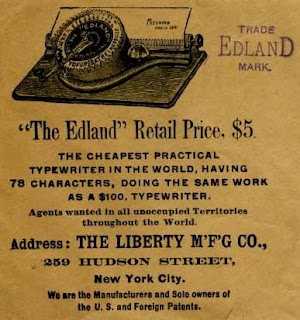 The second version also had a three-quarter circular index, rather than the full circle on the first, perhaps allowing more visibility of the writing. Edland described his updated machine as one “of simple construction, which works rapidly and accurately and can be made at a reduced cost”.
See Paul Robert's entry on the Edland at his Virtual Typewriter Museum here.
Joe Edland was born in Stockholm on August 23, 1868, and arrived in the US in March 1882, aged 13. He was still working as a mechanic in 1940, aged 72, so he probably hadn't make a fortune from his little typewriter. But he did take his wife home to Sweden to visit family and friends in 1922, a trip made possible, perhaps, by the proceeds of typewriter sales.

Posted by Robert Messenger at 14:59