On This Day in Typewriter History: Allen's American 'Writing Ball'

PART 211
It looks, from the top, almost like the Hansen Writing Ball. But the keytops are parallel to the writing surface. It's the "type writing machine" for which "Rarin', Tearin', Pitchin'" Robert Allen was issued with a patent on this day (December 21) in 1875. 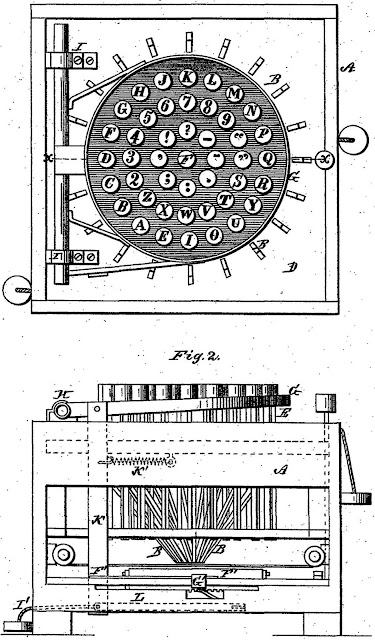 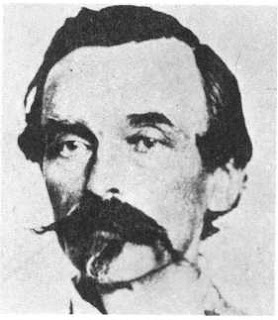 Robert Thomas Pritchard Allen
Robert Thomas Pritchard Allen, of Farmdale, Kentucky, was a military instructor born in Maryland in 1813. He graduated fifth in his class at West Point in 1834. After brief service in the Seminole War, he resigned his commission to become, in turn, a civil engineer. a Methodist minister and a professor successively at Allegheny College in Pennsylvania, at Transylvania University in Kentucky and at Kentucky Military Institute, which Allen founded in Lyndon in 1845. He moved to the Far West in 1849 and worked as a special agent for the United States Post Office Department in California and Oregon. He later owned and published the San Francisco Pacific News before moving in 1857 to Texas, where he established the Bastrop Military Institute. There the cadets reportedly "loved and honoured him".
With the outbreak of the Civil War, Allen was placed in charge of Camp Clark, a camp of instruction on the San Marcos River near Martindale. He briefly commanded the Fourth Texas Infantry Regiment of what was to become the famed Hood's Texas Brigade, but "although a man of thorough military education",  according to the regiment's chaplain, Nicholas A. Davis, Allen "was not acceptable to either men or officers." In fact, the high-spirited Texans literally drove him from their camp because of the reputation as a "Rarin', Tearin', Pitchin'" martinet that he had acquired while supervising their training at Camp Clark.
Allen returned to Bastrop and on February 26, 1862, recruited the Seventeenth Texas Infantry Regiment of John G. Walker's Texas Division, which he commanded until November 1863, when he was given charge of Camp Ford, a prisoner of war camp near Tyler. After the war Allen returned to his old position as superintendent of Kentucky Military Institute, where he continued to serve until 1874. On July 9, 1888, Allen drowned while swimming in the Kissimmee River in Florida.

I've never seen this invention before, and its inventor was a colorful guy. Thanks!