Scott Kernaghan suggested the other day that a good place to be during a heatwave would be an air-conditioned hospital. Too right. 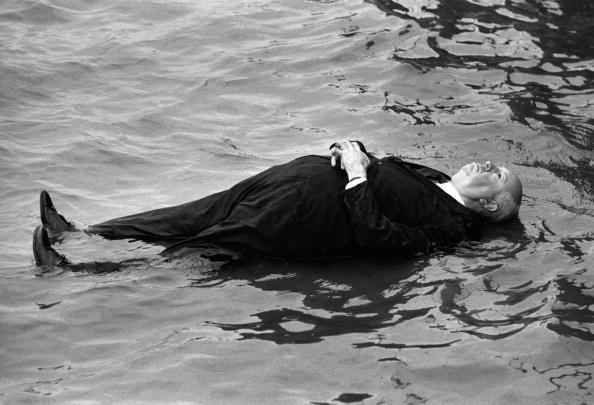 Or, as the great movie director Alfred Hitchcock appears to be doing in this August 26, 1971, photograph, go swimming (even fully clothed)  in a cool river. A mock-up of Hitchcock's dead body floating in the Thames was filmed for a scene in the movie Frenzy.
As it turns out, being in a cinema watching a movie about Hitchcock is also an ideal spot in this unusually hot Canberra weather. Before going into hospital, I went to see the film Hitchcock, starring Anthony Hopkins as Hitchcock and Helen Mirren (surely the world's sexiest 67-year-old?) as his wife Alma Reville. 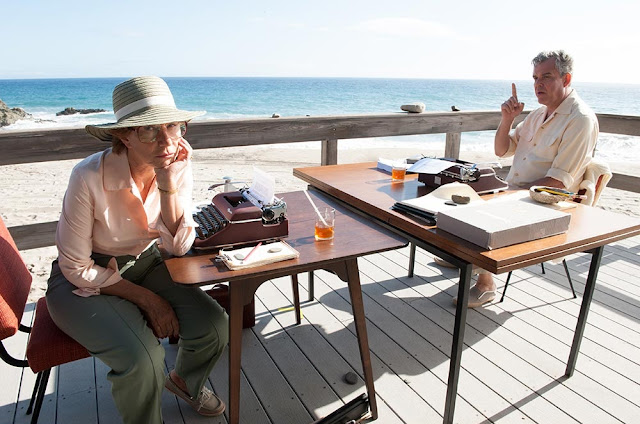 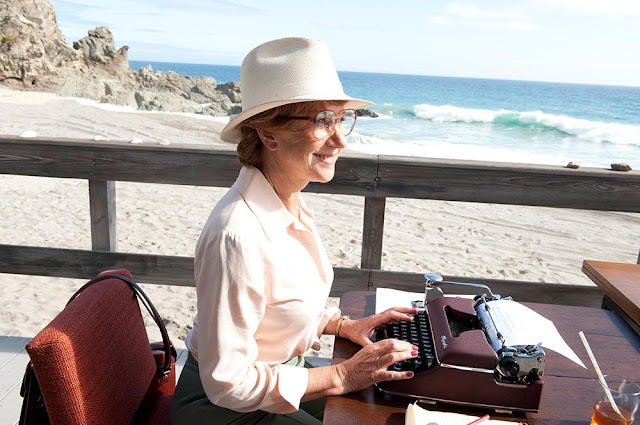 There are plenty of typewriters in the movie. Mirren as Reville and Danny Huston as writer Whitfield Cook go head-to-head in a duelling burgundy Olympia SM3s scene on a Californian beach. Australian actress Toni Collette, as Hitchcock's secretary, seems to be using an interesting looking pale green Mercedes at one point (I say Mercedes based purely on the T-shaped carriage lever. Did other portables use this design?). There's a Remington 'Superman" typewriter in there somewhere, too, I think. 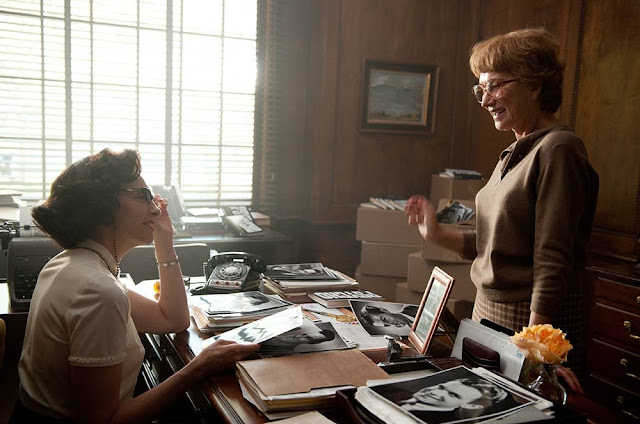 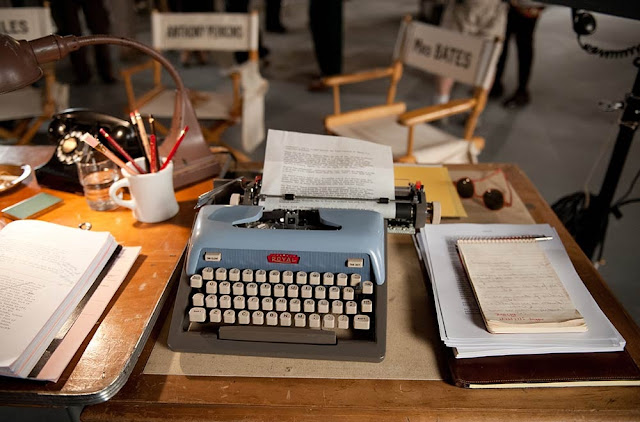 ... but I don't recall the Royal Futura on the set 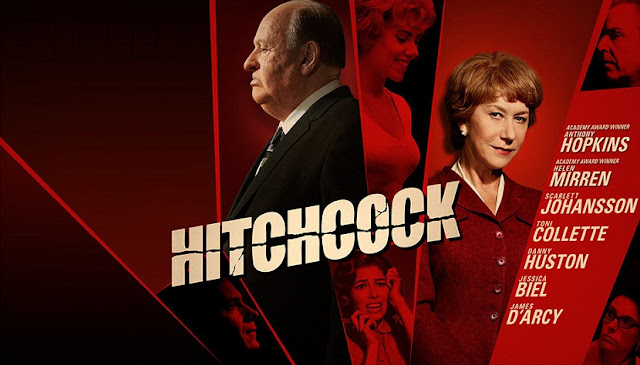 Hitchcock is based on Stephen Rebello's non-fiction book Alfred Hitchcock and the Making of Psycho. It centres on the relationship between Hitchcock and Reville during the making of the horror movie Psycho. Alfred Joseph Hitchcock was born on August 13, 1899, in Leytonstone, London, and died on April 29, 1980, aged 80, at Bel Air, California. Alma Lucy Reville was born the day after Hitchcock, in Nottinghamshire, and died two years after him, on July 6, 1982, aged 82, in Bel Air. 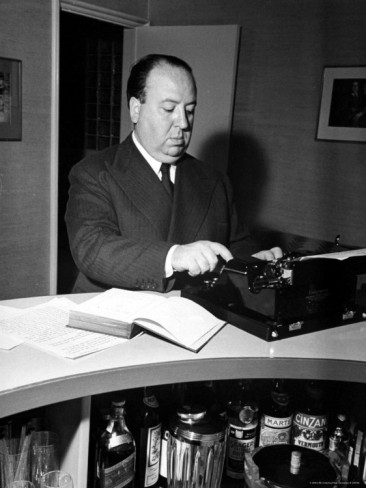 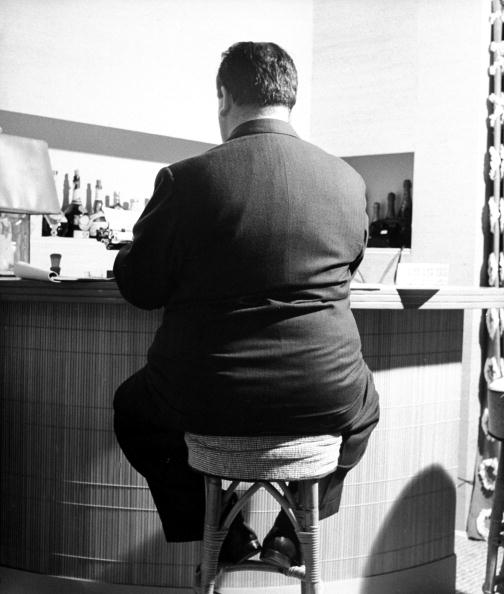 Here we see front and back views of the real Hitchcock typing a script on his Underwood Champion portable typewriter as he sits on stool at small bar in his apartment in the Wilshire Palms, Palm Springs, in March 1939. David O. Selznick had just signed Hitchcock to a seven-year contract and the Hitchcocks had moved to Hollywood. 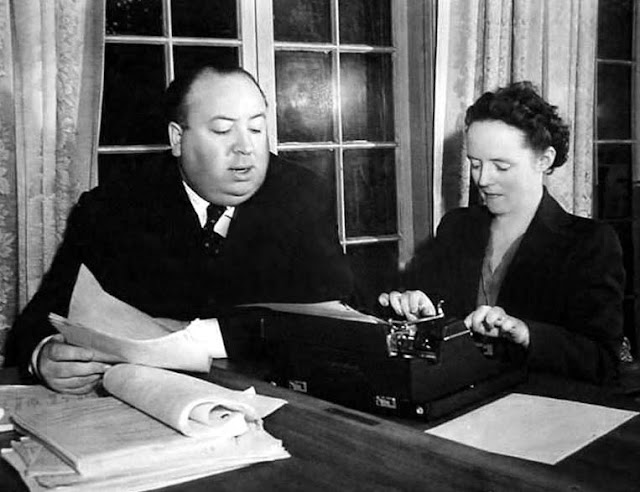 Hitchcock and Reville collaborate on a script, using the same Underwood, I think? 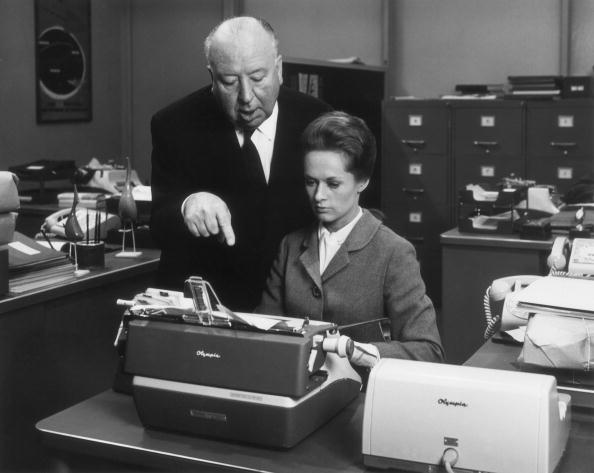 Hitchcock directs American actor Tippi Hedren while she sits at an Olympia typewriter on the set of his film, Marnie, in 1964 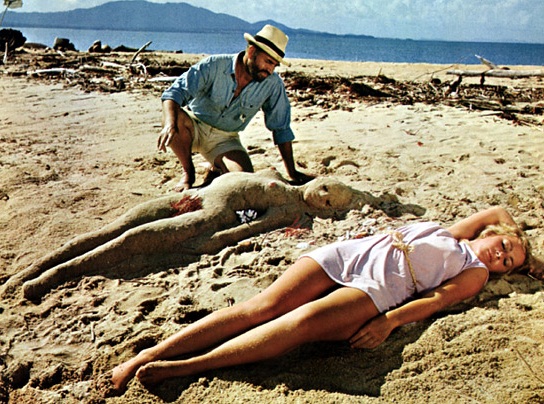 Another good place to be in a heatwave would be in the ocean on the Great Barrier Reef in North Queensland. Mirren's first major film role was as the occasionally dressed Cora Ryan in the 1969 Australian movie Age of Consent, based on the 1935 semi-autobiographical novel by Norman Lindsay.  The movie, starring James Mason, moved the location of the story from New South Wales to the Barrier Reef and was filmed on Dunk Island and Purtaboi Island. 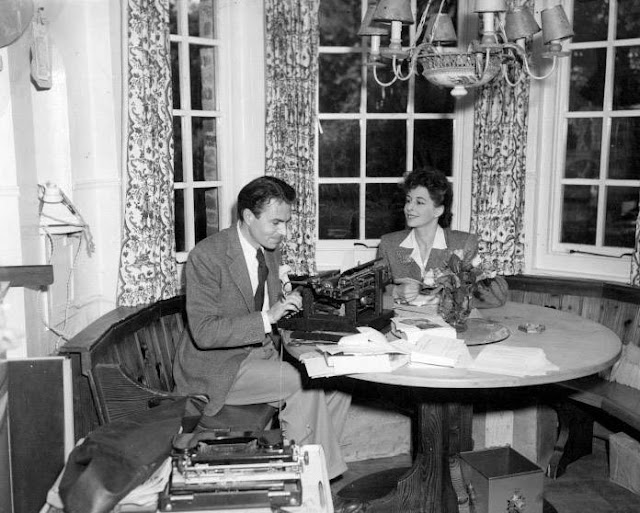 James Mason fully dressed, at home in Hertfordshire
Posted by Robert Messenger at 16:43

Such beautiful burgundy Olympias! I must go see this pronto!

WHat's the other Olympia-labeled device next to the Olympia Tippi Hendren is typing on?