The Insertable Olivetti and the Tongan Death Grip 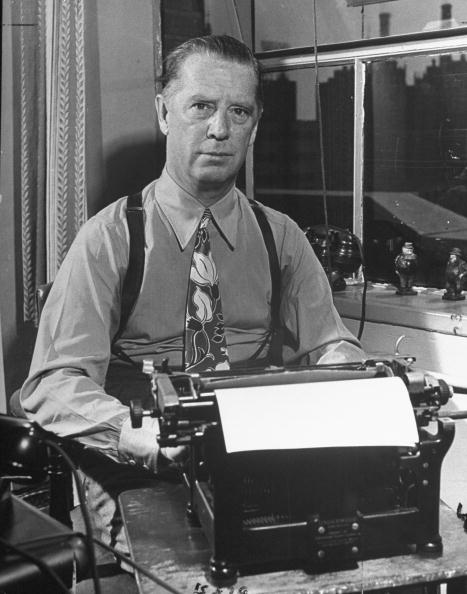 Westbrook Pegler armed himself with a Royal 10 when he worked at Scripps Howard and an Underwood 5 when he moved to Hearst’s King Features. Either way, surrounded by toy soldiers and barricaded in offices high above any raslin’ ring, he was safe, well and truly protected from vexed wrestlers. Me? All I had was an Olivetti Lettera 32, small enough to allow a man born Władysław Spulnik the thought that he could use it to spulnik me all over a boiling canvas. Mr Spulnik was better known to the world as Killer Kowalski, and when he went by that name, one had a tendency to take his ideas rather seriously. 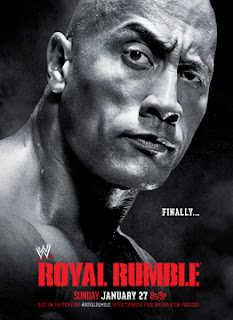 Now that it’s time for raslin’s Royal Rumble again (it will be held in Ryan Adney’s home town of Phoenix, Arizona, on Sunday), I am reminded of the one and only time I ever watched this enthralling travesty of small stage (and screen) dramatics.
Son No 3, just embarked on a chef's apprenticeship at The Boathouse, and therefore no longer overly endowed with the folding stuff, got home from touch football one late January evening in 2008 and promptly announced he was about to give the never-needy Rupert Murdoch $30 of my hard-earned so he could tune into a main event of Foxtel’s pay-to-view TV – the Royal Rumble. This, I was informed, was an all-in professional wrestling stoush of right regal proportions, one which would purportedly be beamed direct into my own personal City Dump (aka Son No 3's bedroom) from Madison Square Garden in New York, and which would be very much worth every cent of what I judged (given it was pro wrestling) to be an unjustifiably considerable financial outlay. My estimate of the value of paying to watch such stuff would have been closer to three cents, for which there is no longer any denomination. 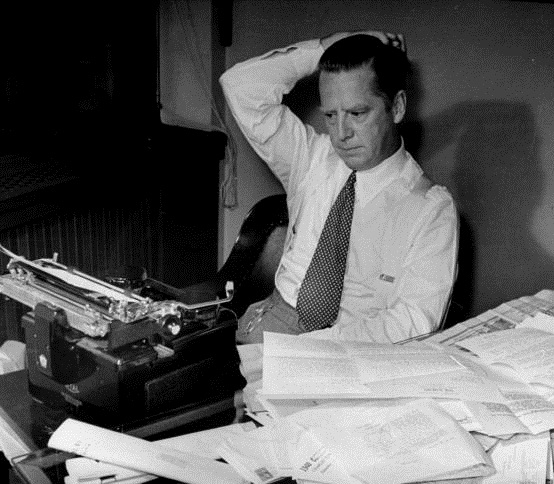 My thoughts were cast back 41 years, when Olivetti Lettera 32s and one and two cent coins were still new. I was instantly and frighteningly refreshed of visions of the vexatious Mr Spulnik. And having had that aforementioned near-fatal brush with pro wrestling, I was of no mind to argue with Son No 3. Unlike Pegler, who must have had family jewels the size of “Dirty” Al Costello’s to ask in large print “Are Wrestlers People?”, in the summer of 1967 I had had the audacity to suggest in lesser print that pro wrestling would be far better suited to the theatrical section of my newspaper than the sporting pages. Duly, at Wingham Park outside Greymouth in New Zealand, I had been invited into the ring by Mr Spulnik, who on this occasion was indeed going by the name of Killer Kowalski. The Killer wanted me to find out how fair dinkum “raslin’ ” really was, by becoming the victim of his “Tongan Death Grip” trick. Killer was kind enough to add that, should I survive this mental if not physical torture, he would shove my Olivetti right up where the sun don’t shine. The sun don’t shine too much in Greymouth at the best of times, but on this afternoon at Wingham Park the sun shone and the few clouds danced and I felt the Gods of Wrestling were having a bit of fun at my expense. But given, as Killer took pains to explain, I had at most eight seconds in the Tongan Death Grip before I asphyxiated and died, I was disinclined to tempt those Gods into anything more serious. 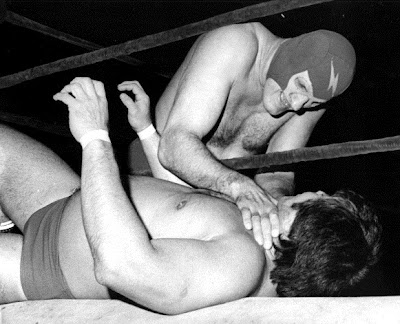 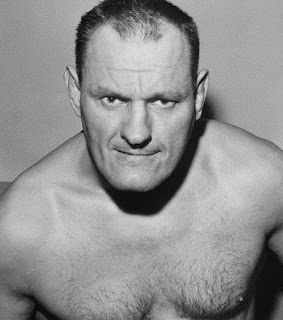 Now where's that typewriter?
Notwithstanding The Killer's seemingly genuine menace that hot afternoon, I never thereafter found myself capable of taking pro wrestling too seriously. At The New Zealand Herald in Auckland, where first names were never used and every sportsperson had at least two or three initials, it was gut-wrenchingly funny to have to type in "Mr C.L.Wolf" when referring to the Native American rasler Chief Little Wolf (aka Ventura Tenario, from Hoene, Colorado). 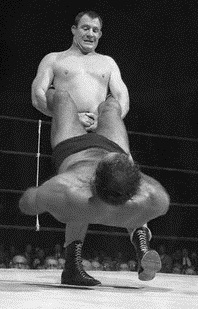 Pat O'Connor gets into the swing of things
This night of the 2008 Royal Rumble, however, I managed to summons the intestinal fortitude to venture into my own personal City Dump, in an effort to add to the atmosphere of what was being treated as a momentous occasion. I proffered my youngster the information that when I was a lad (in pre-TV, let alone pre-pay-for-view TV 1958), the closest one got to pro wrestling was through the pages of Brian O'Brien's Sports Digest, where I had been delighted to discover my homeland had produced a Real McCoy world heavyweight champion, one Patrick O'Connor, from Raetihi. Thus taking an interest in what I then believed to be a sport, my brother had demonstratively regaled me of the night Lofty Bloomfield applied the Octopus Clamp to “Dirty” Al Costello at the Regent Theatre, Greymouth, and Costello had somehow managed to summons the power to escape this infamous grip by biting himself on a sensitive part of his anatomy. But those days had long since gone. So was I, apparently. Son No 3 glanced over his shoulder from his ringside seat, 26.71cm from the TV screen. "Really?'' he asked, which such indifference I felt as if I’d been instantly vaporised into an aged and meaningless nothingness. 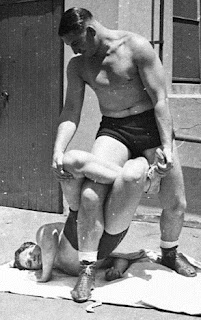 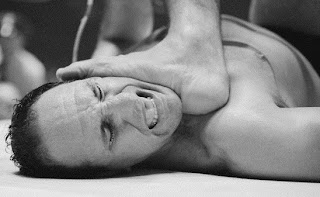 And Al Costello reaches for the jewels
Feeling the wrinkled skin still on my decaying bones, I promptly departed the scene for Mawson, to collect the fourth in line to the Typewriter Empire, just embarked on a mercifully short-lived career behind the fish food counter of Woollies Southlands. Upon my return to Chez Smith-Corona, the Madison Square Garden signal had been redirected to the dining room, where the boys, as is their wont, attentively followed the action while unappreciatively devouring a finely cooked dinner. In his attempts to be recognised as a true successor to Pat O'Connor, their man, one Jeffrey Nero Hardy, was meanwhile being chewed up and spat out by Randal Orton in a World Wrestling Entertainment title fight. It was all over by dessert.

Mr Hardy                                     Mr Orton
Under the mistaken belief that this marked the end of the evening's entertainment, I adjourned to the doorless O & O (as in Olivetti and Olympia) Room, in a vain search for the peaceful environment in which I could concentrate on continuing to compose the Great Australian Novel (as written by a naturalised son of the Southern Cross) on my own Underwood 5.
The boys and their siren allies, the World Wrestling Entertainment commentators, joshing Jerry Lawler and his cohort Jim Ross, unfortunately had other ideas.  The boys had moved back to the now relative comfort of the City Dump, to resume their ringside seats at 26.71cm range to watch the Royal Rumble, leaving, as is their wont, Madison Square Garden still being beamed and blared into my Cyclone Tracy-struck dining room. Between the screams of Lawler and Ross, as each new wrestler reached the canvas, and the accompanying yelps of my sons, I was forced to abandon, for the 81,032nd time, the Great Australian Novel, and was unwittingly lured back toward the City Dump, to be part of the excitement.
The wrestlers came and went. The Undertaker, an Irish dwarf who hid under the mat, a Samoan called Umaga, one I called the Lumberjack. Unimpressed by such titling, the boys joined their siren allies in announcing the “real” names of the newcomers: Triple H,  Snisky, Super Crazy. Finally there was one man left standing, a chap called John Cena. Once more my boys had backed a loser. Then again, at $30 for three hours of this mind-numbing stuff, and the loss of the chance for an advance on the Great Australian Novel, I suspected I was very much one, too. 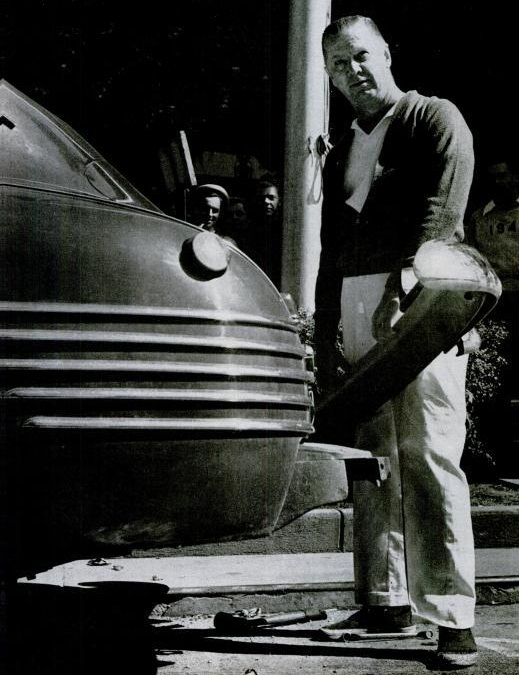 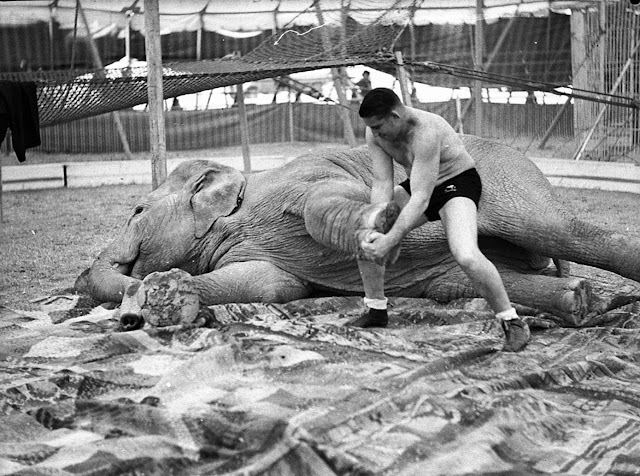 Lofty Bloomfield pins an elephant
Posted by Robert Messenger at 11:03

The whole wrestling world is utterly alien to me.