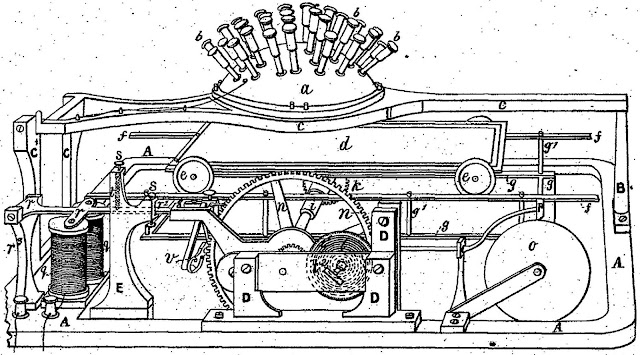 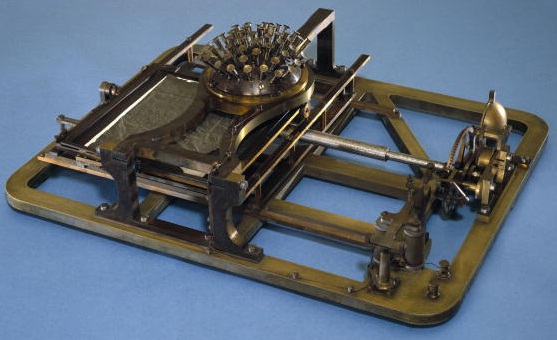 On this day (December 22) in 1874, the great Danish inventor Hans Rasmus Malling Johan Hansen was issued with a US patent for improvements to his 1872 Writing Ball, which he called a "typographical machine". Hansen wrote, "I have now worked out in detail what I have only alluded to in the last sentence preceding the claims of my former application, viz: 'Instead of a drum for carrying the paper driven in the manner as set forth, a flat surface - for instance, a table - may be employed with the same result by moving it simultaneously in both a longitudinal and transverse direction." 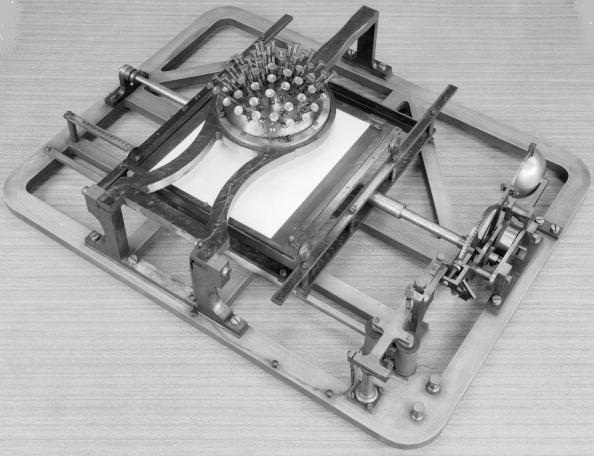 His most famous design was the Hansen Writing Ball, invented in 1865 and first patented and put into production in 1870. Wikipedia tells us that from the book by Hansen's daughter, Johanne Agerskov, Hvem er Skrivekuglens Opfinder?, we know Hansen in 1865 made experiments with a model of his writing ball, made of porcelain. He marked the letters on the model, and while his brother-in-law recorded the time, he tried to write as fast as he could with different placements of the letters. In this way, he found an arrangement of letters on the keyboard that made the writing speed very fast. He positioned the most frequently-used letters to be manipulated by the fastest writing fingers, with vowels to the left and consonants to the right. This, together with the placement of the letters on short pistons, made the Hansen Writing Ball a very fast  writing machine. On the first model, the paper was attached to a cylinder, which moved by the help of an electromagnetic battery, making the writing ball in principle also the first electric typewriter. The writing ball is characterised by its finely crafted mechanical details.
Hansen developed his invention further throughout the 1870s and '80s, and in 1874 he patented a new model in which the cylinder was replaced by a flat carriage on which the paper was fastened.

In 1875 the writing ball found its well-known tall shape. With this model, Hansen found a mechanical solution for the movement of the paper, dispensing with the battery. The writing ball was sold in many countries in Europe, but probably due to the relatively high price, it was never a great commercial success. Even so, it was a great success in different exhibitions, and Hansen received the first prize medal at a large industrial exhibition in Copenhagen in 1872, and at the world exhibitions in Vienna in 1873, as well as in Paris in 1878. That year Hansen also invented a fast speed writing machine to be used for stenography, called the Takygraf. Hansen was also the first person to discover the unique possibilities of blue carbon paper, and developed a copying technique he called the Xerografi. It could, in a relatively short time, produce up to one hundred copies of letters and drawings.
Hansen died in Copenhagen, aged 55, on September 27, 1890.

Posted by Robert Messenger at 16:33

The man was a genius. Readers should know about the Malling-Hansen Society.

You can see and read about a porcelain writing ball model in ETCetera no. 78.

Thank you Richard. I have since added in two better images of the machine which I had but forgot to use in the first place.