On this Day in Typewriter History: An Expanded Hall

PART 210
On this day (December 20) in 1887, two young Ohioans, William Octave Garner and Prussian-born Charles Friedrich LaGanke, were granted a patent for an expanded version of the Hall index typewriter. It was a machine designed to type whole two-, three- or four-letter words at one impression of the plunger. 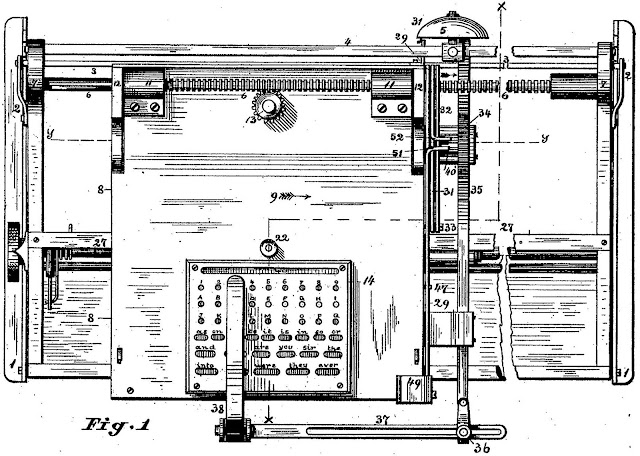 I find this a little bewildering, since the first patent for Hall's typewriter was issued just six years and nine months earlier (on December 1, 1880, see here) and surely must have still been in force in late 1887. Indeed, under normal circumstances it would have held until about 1895. Perhaps Garner and LaGanke had come to some commercial arrangement with Hall to expand his machine. Hall, meanwhile, continued to develop his original design. 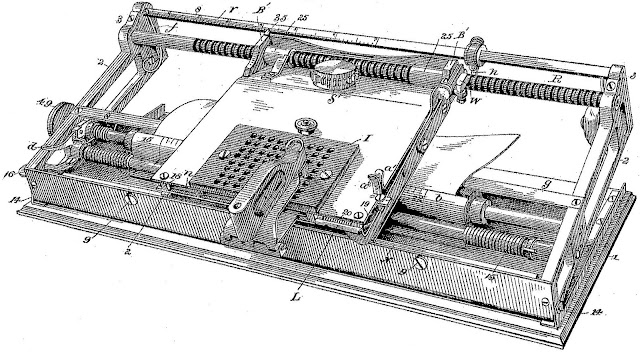 Hall's original 1880 design
Garner, of Oberlin, and LaGanke, of Cleveland, stated in their specifications, "The main part of the typewriter - the frame, the carriage, the inking pad, paper-holder, printing-post and finder-arm - are all substantially the same as those shown and described in the patent to Hall ... The typeplate is enlarged and provided with a certain number of rows of type - letters and numbers - running lengthwise of the machine. Next [to] these rows of type are one or more rows of words of two letters most commonly used, such as 'on', 'to', 'it', 'is', 'us', 'as' etc. Next to these are one or more rows of type of words of three letters of general use, such as 'and', 'are', 'the', you', 'Sir' etc. Next to these are one or more rows of type for words of four letters in most common use, as 'into', 'your', 'were', 'ever', 'thus' etc."
Garner was born on March 19, 1869,  in Garnnon, Livingston, Michigan. He was the son of    Zelota Mary Garner, who in the year of her son's typewriter patent (1887) published the groundbreaking book No Sex in Sin. Zelota's book  examined why we "excuse in men what cannot be overlooked in woman; that it is unjust to welcome reformed men, who have lived drunken lives, to hearthstone, platform and pulpit, while a woman who has erred can never again win forgiveness, confidence or recognition". Fair question!
LaGanke assigned his half of this typewriter patent to Zelota Garner. LaGanke, born the son of an engineer, in Prussia in July 1864, was a machinist who went on to become the superintendent of the typewriter factory in Cleveland. He later joined forces with Robert Joseph Fisher in developing the Fisher book typewriter. 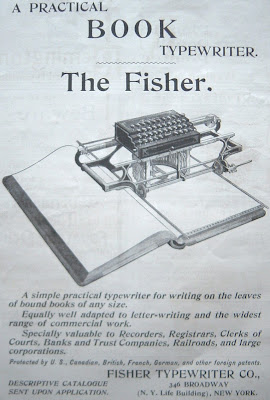 Garner and LaGanke's invention was referenced in an 1896 patent for an electric typewriter by Thaddeus Cahill (for more on this, again I urge the reader to buy the December 2012 edition of ETCetera). Cahill wrote, "The object of my invention is to increase the amount of work which can be done in a given time with an instrument of the kind before mentioned by enabling the operator to make two letters simultaneously; and my invention consists in the parts, improvements and combinations hereinafter described and claimed. I shall first describe my invention as applied to a type-writing machine, and will then point out how it may be used in type-setting machines and other similar instruments. The accomplishment of the object before mentioned, to wit, making two letters at the same time, has been attempted heretofore in a variety of ways. Thus in type-writing machines having type-forms, or 'key-wheel' machines, as they are termed in the Patent Office classification, it has been attempted (a) by furnishing the type-form with word-characters, as in the patent to [George Canfield] Blickensderfer, No 457,333, dated August 4, 1891, or the patent to Garner and LaGanke, No 375,062, dated  December 20, 1887 ..."
Happily I have stumbled across an article on Thomas Hall in Typewriter Topics. I had never previously seen a photo of Hall, nor read much about his life, and it was pleasing to see how revered he was before he died in 1911. It is fascinating to find that at one time Hall owned every current US typewriter patent, including those of Alfred Ely Beach (1856) and Samuel Ward Francis (1857, see here). Here is the piece: 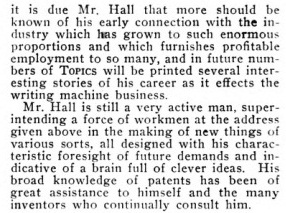 Hall looks likeable in that photo and it's an informative piece that I'd never seen before.

The concept of an index typewriter printing whole words is new to me. Always something fresh in typewriter history!

But we all want to know: is there Sin in Sex?